People Can Fly and Square Enix unveils in the third issue of their shooter RPG the fourth class: the versatile Technomancer.

Square Enix has issued a third broadcast on August 25 about Outriders, the third-person shooter with important RPG elements from People Can Fly, the developers of great shooters such as Bulletstorm. If in the first broadcast they focused on how the difficulty levels will work and in the second on the adventure structure, today they have shown us something more palpable: extensive gameplay of the cooperative mode. As on previous occasions, the details of one of the four classes, the Devastator, have also been explained; Also, the last and fourth class has been unveiled: the Technomancer. Before we go into the details of what it will be like to play with friends and strangers, let’s explain how the hard-hitting Devastator will work so you better understand the synergies that will occur on the battlefield.


A rocky tank: this is the Devastator

In one of the past broadcasts, we saw the Devastator’s gameplay where it was revealed what he really is: a tough, resistant and rocky character. Literally, because he has abilities that surround him in stone, it is a class that is based on the powers of earth and gravity with three central pillars: melee attacks, protection and seismic magic.

The Outriders classes have a characteristic melee ability, a particular healing system and eight different powers; The player can customize all of these components with the Talent Tree, Armor, and Weaponry. In the Devastator case, his melee applies to bleed to nearby enemies, continuously dealing damage to them. As for the healing system, he gains more base health and armour when opponents around him die. 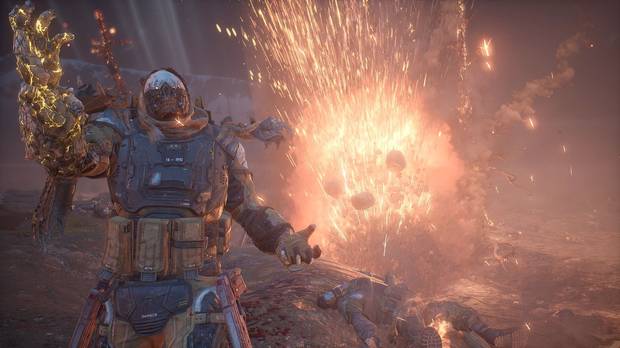 That healing ability sounds similar to the Trickster, which gains shields when nearby enemies die, but there are differences. With the talent tree, you can learn skills like draining armour from enemies that fall around you to give an example of the different ways in which your healing can vary. Ultimately, the Devastator is designed to be a robust front-line tank. This is demonstrated by four of his eight powers that have been revealed:

The Devastator can be customized with the talent tree by dedicating points to three different branches. Vanquisher is focused on close combat; Warden turns the character into a powerful tank with bonuses to health, armour, and resistance; Seismic Shifter promotes medium-range combat and continuous damage skills.

After months of anticipation before the fourth class, People Can Fly has revealed the Technomancer, a supporting character, focused on ranged attacks and the use of technology to kill enemies. Although they have not gone into details, they have ensured that it has the best healing ability of the four classes and have shown in the gameplay three abilities: a proximity mine that can also be used as a grenade, a powerful and slow rocket launcher and a powerful turret. . He is a character who can fend for himself with the right talents, but in the video shown he shines by combining his powers with the containment magics of the Trickster and the Pyromancer.

The mission used to exemplify the cooperative mode follows a traditional mold in a shooter game, but it serves its purpose in showing us how the different classes’ skills can (and should) be mixed. The objective in “Onslaught” is to advance through a battlefield on an entrenched hill to conquer a bunker. Here you can see how the combat, despite using ranged weapons, is always very close, dirty and very resounding, even with the Technomancer. The screen is always full of explosions, magical effects, or both. 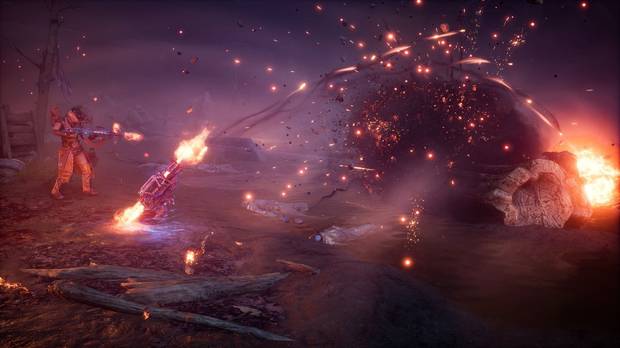 Regarding cooperation, the video shows several scenes that exemplify the importance of synergies. In one of them, a character momentarily freezes several enemies so that another can fry them. In another sequence, the Pyromancer catches enemies that are struck down thanks to the turrets placed by the Technomancer. The strongest and largest enemies are bullet sponges: they require the use of skills and coordination between players to kill them. Very tense situations are also appreciated, such as when a player falls in a battle full of enemies. The other two have to coordinate to lift him: one using the shield to catch the bullets and the other taking cover while casting magic.

People Can Fly is aware that their game asks to be played cooperatively, but it is also an adventure significant to the plot. Players will be able to invite friends to their games as soon as they have completed the prologue. There will be freedom to enter and exit the games of friends and strangers, regardless of the level, if you had played with those people before or reached that point in the story. If the plot is more advanced in a game that the player is about to enter than what he has achieved in his own campaign, the game will display a warning: you may find plot spoils.

In the coming weeks, we will learn more details about Outriders, such as the operation of the end-game content and the details of the Technomancer. The release date planned for Christmas is getting closer and closer, when the game will be available on PlayStation 5, PlayStation 4, Xbox Series X, Xbox One and PC through Steam and the Epic Games Store. Next year it will also come to Google Stadia.