Did copies of Modern Warfare hit the streets early?

VonGarcon (user on Twitter) claims he has multiple copies of Call of Duty: Modern Warfare well before its October 25 public street date, and that he intends to sell them for $250 apiece. He’s one of at least two individuals on social media who claim to have acquired copies of the game, according to Eurogamer.

The man, known as VonGarcon on Twitter and Twitch, shared a photo on his personal Instagram showing seven copies of Call of Duty: Modern Warfare.

In the caption, VonGarcon asks for $250 per copy. 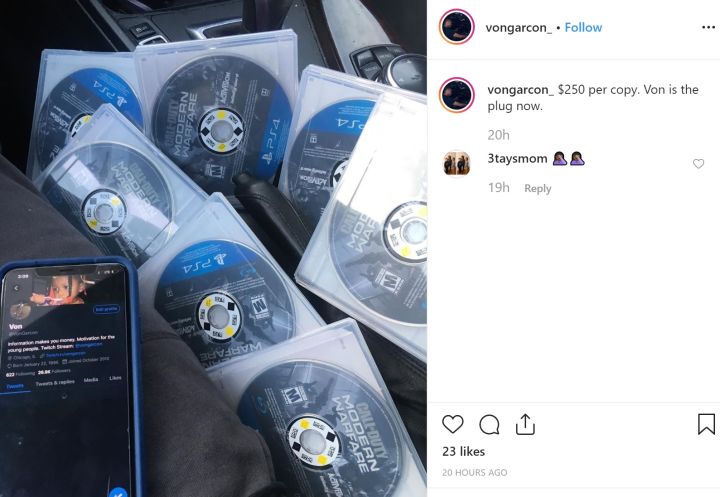 The Modern Warfare discs are in clear plastic cases rather than the normal retail packaging, suggesting the discs may be rental units or wholesale. Typically retailers will receive physical units of a game before its release date, which is sometimes how copies leak before street date. Whatever the alleged source is, VonGarcon claims that he purchased them from an undisclosed party with the intention of reselling them at the higher value price.

After other Twitter users asked if he’d post gameplay, VonGarcon said he wouldn’t, but proceeded to post a short video allegedly showing him playing what appears to be the game’s Gunfight mode (though others on social media suggest it may be a training mode) while another person says it’s October 18 in the background. VonGarcon appears to have custom settings enabled, allowing him to use a minimap that isn’t there by default.

Aside from the minimap (and what appears to be a different variation of the win/loss counter in the bottom left corner, the user’s video appears similar to footage IGN has captured at previous preview events, like our highlight reel of Modern Warfare’s Gunfight mode gameplay. These similarities suggest that the copies he intends to sell at an inflated rate are legitimate.

It’s entirely possible that retail or rental copies of Call of Duty: Modern Warfare have managed to slip from their usual supply chain, especially with less than a week before its official release date. Thus far, Activision and Infinity Ward have been particularly tight on campaign mode spoilers, releasing only a handful of trailers. As for the repercussions, it’s possible that fines can be implemented when a retailer breaks street date on a high profile product like Modern Warfare. If a retail employee is shown to have had a hand in this product leak, they could experience some significant consequences, too.

On Twitter, VonGarcon added that he bought the copies, but was not aware of how they were originally obtained, stating that he does not work at Redbox.

A source familiar with Redbox says that the barcodes packaging seen in the initial Instagram post indicates the copies are likely taken from Redbox’s facilities.