Bonfire Peaks tells a story of learning and self-improvement through a challenging and entertaining series of puzzles.

There is a button in Bonfire Peaks that only serves to sit. We used to pick up and drop the boxes to solve the puzzles, but if we do not have anything in our hands and we leave it pressed, the character sits on the floor. It is a simple detail that says a lot about this new work by Corey Martin, creator of Pipe Push Paradise, which is sponsored by Draknek, responsible for A Good Snowman Is Hard To Build; As we sit down, we give ourselves time to think, look at the puzzle, scrutinize its limited space, and try to break through the restrictions that prevent us from discovering the solution.


It rarely works the first time. It is the golden rule of the Sokoban, a demonic genre based on puzzles with boxes that have given us works as good as those mentioned above, in addition to other great titles such as Stephen’s Sausage Roll or even Baba Is You if we expand the boundaries a bit. In Bonfire Peaks, the basic premises that are asked of any Sokoban are respected. Still, additional rules based on three-dimensionality are added, its spaces are compressed even more, and a particular narrative is printed telling us the story of a man who wants to get rid of their belongings by burning them on a pyre. All wrapped in a preciousVoxel style graphic section and with a calm and atmospheric background music that makes it a bit easier for us to squeeze our brains.

The main objective of each level of Bonfire Peaks is to burn a box of belongings in a large bonfire. For this, we will have to reposition other boxes on the stage, also helping us with the same structures. It will not be easy; As much as it may seem that the dioramas in which these puzzles are represented are tiny, and therefore simple, the millimetre design turns each step into a whole process of level analysis so that tasks as simple as climbing a step or turning a corner can be quite a challenge. 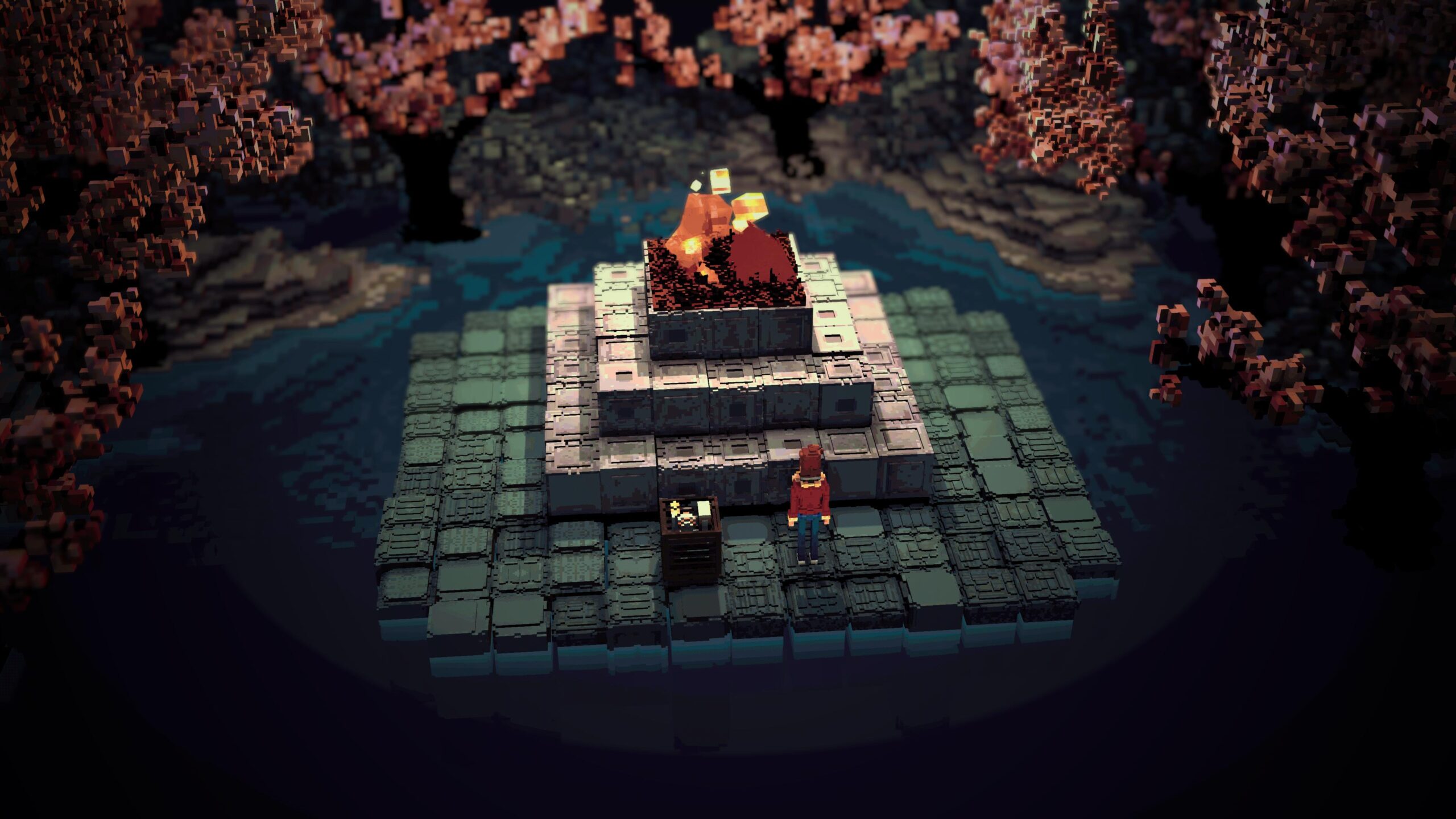 Corey Martin has played very well with height in this vitaminized Sokoban, exploring new types of puzzles beyond pushing and turning boxes; the scenarios, designed with ingenuity, hide restrictions that are not seen with the naked eye and that trap us for minutes, hours or even days. That feeling so familiar in the genre of thinking about a puzzle when we don’t even have the game open is here. Still, that contemplation is also encouraged within the game itself thanks to details such as that button dedicated exclusively to sitting down or the pleasant, artistic design of the game, with a soft, almost relaxing movement and a captivating soundtrack.

And if that contemplation is necessary, it is because, as we said before, the Bonfire Peaks puzzles are designed to the millimetre, with a renovating ingenuity that takes the best of the genre and gives it a new depth. Surprisingly, he manages to do it in such contained settings and, sometimes, with such scarce elements: suddenly, we can face a puzzle that begins with only two boxes, the one that we have to burn and another that we will use as a step. Even then, we can stick a good time thinking about how to overcome it. The constant reinvention of its rules is not lacking, introducing new elements such as double or vertical boxes and unique obstacles such as spikes or water currents. The design of the puzzles will delight those who prefer this type of game, but it can also hook those who do not have a previous relationship with it.

It’s all part of a one big puzzle

Bonfire Peaks splits in two. On the one hand, we have what the game calls the ‘outside world,’ which is something like a hub from which we can access the puzzles as such and on the other, these puzzles, which are levels independent of each other. When we solve a puzzle, we get a box in the outside world, which will help us overcome the unevenness of the hub, which is a large-scale puzzle; This allows us to advance to discover more bonfires (from which the puzzles are accessed) and optional secondary paths so until we find the around 200 levels that the game offers us. 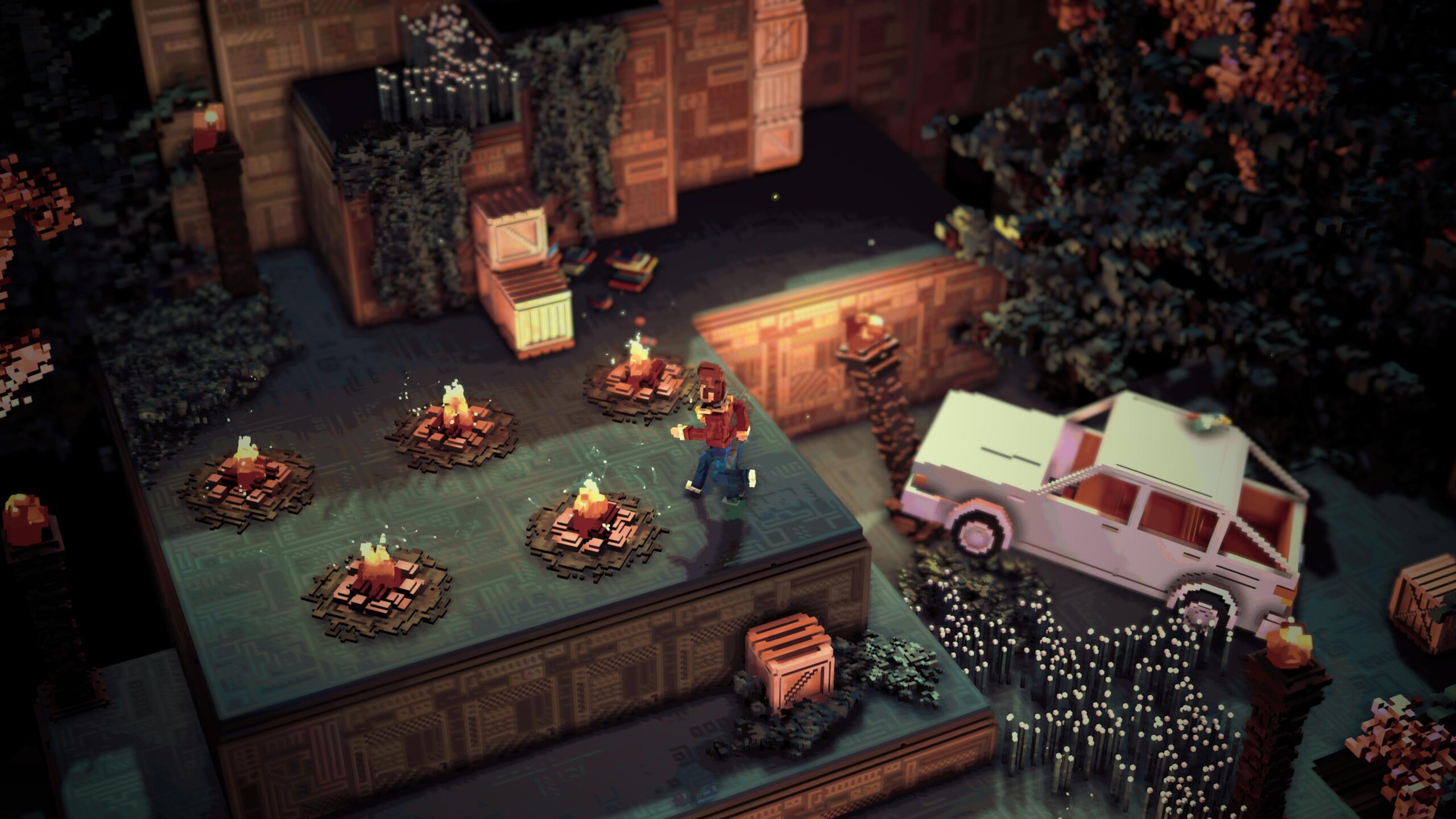 The bonfires that give access to each map are somewhat strange on the stage, deviating more towards the hub side than the semi-open stage to explore. As with the controls, it is understandable that this system has been chosen that is more comfortable for the player and author but less evocative; That does not mean that from time to time, it screeches to see a row of bonfires as if it were a menu for selecting levels (which is what it is, after all). 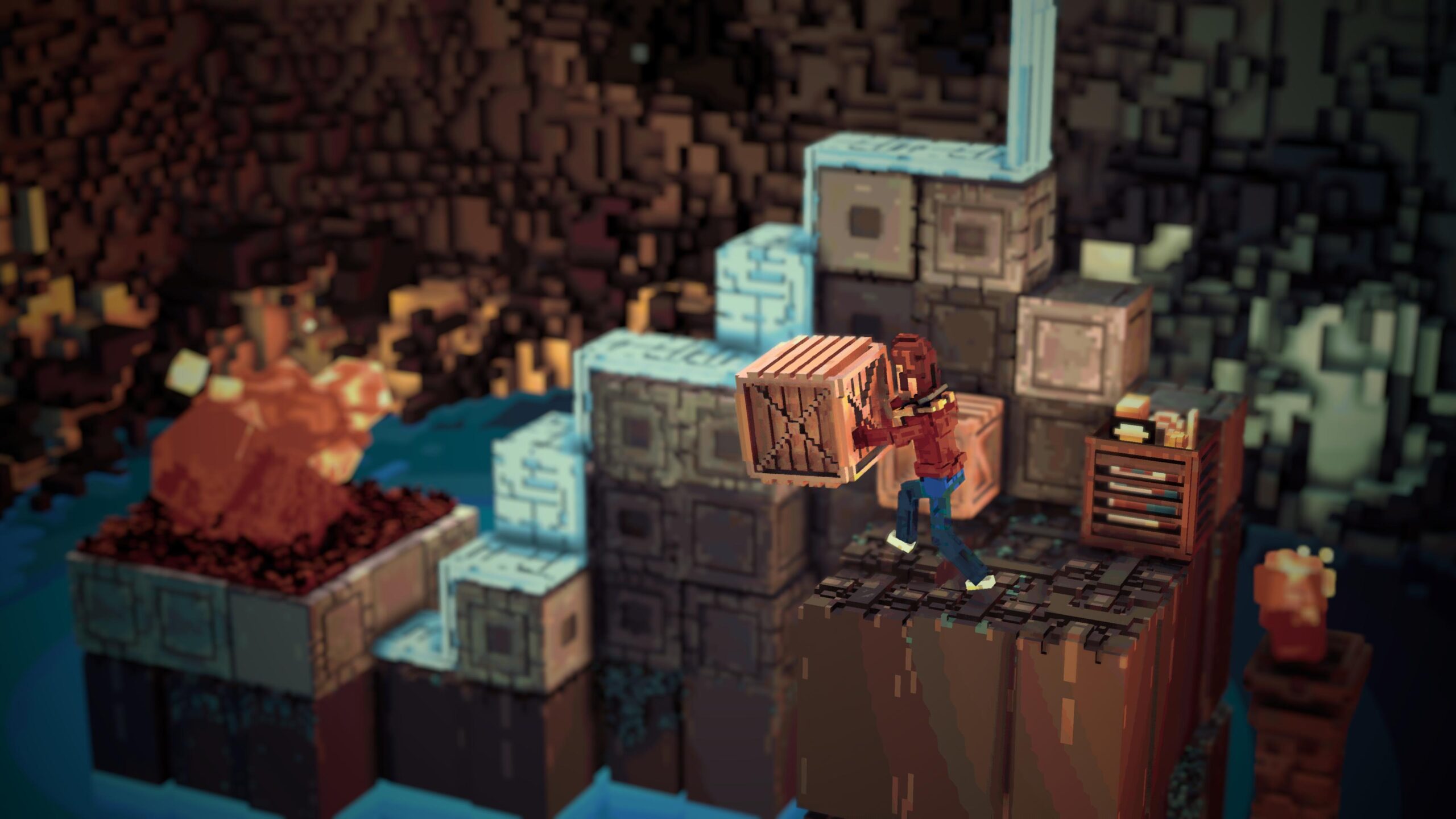 Leaving that stumbling aside, with this double facet, a fluid rhythm is created that feels great to the Sokoban formula: we usually have several puzzles that we can enter to get new boxes, so if we get stuck in any of them, we can go out into the outside world and try your luck in another. At the same time, we can explore with a little more freedom in the central stage, even regrouping the boxes that we have to access new areas where we will find more puzzles, but optional. Somehow, Bonfire Peaks manages to represent better the feeling of free exploration than A Monster’s Expedition did., even though it described itself as an open-world puzzle game. 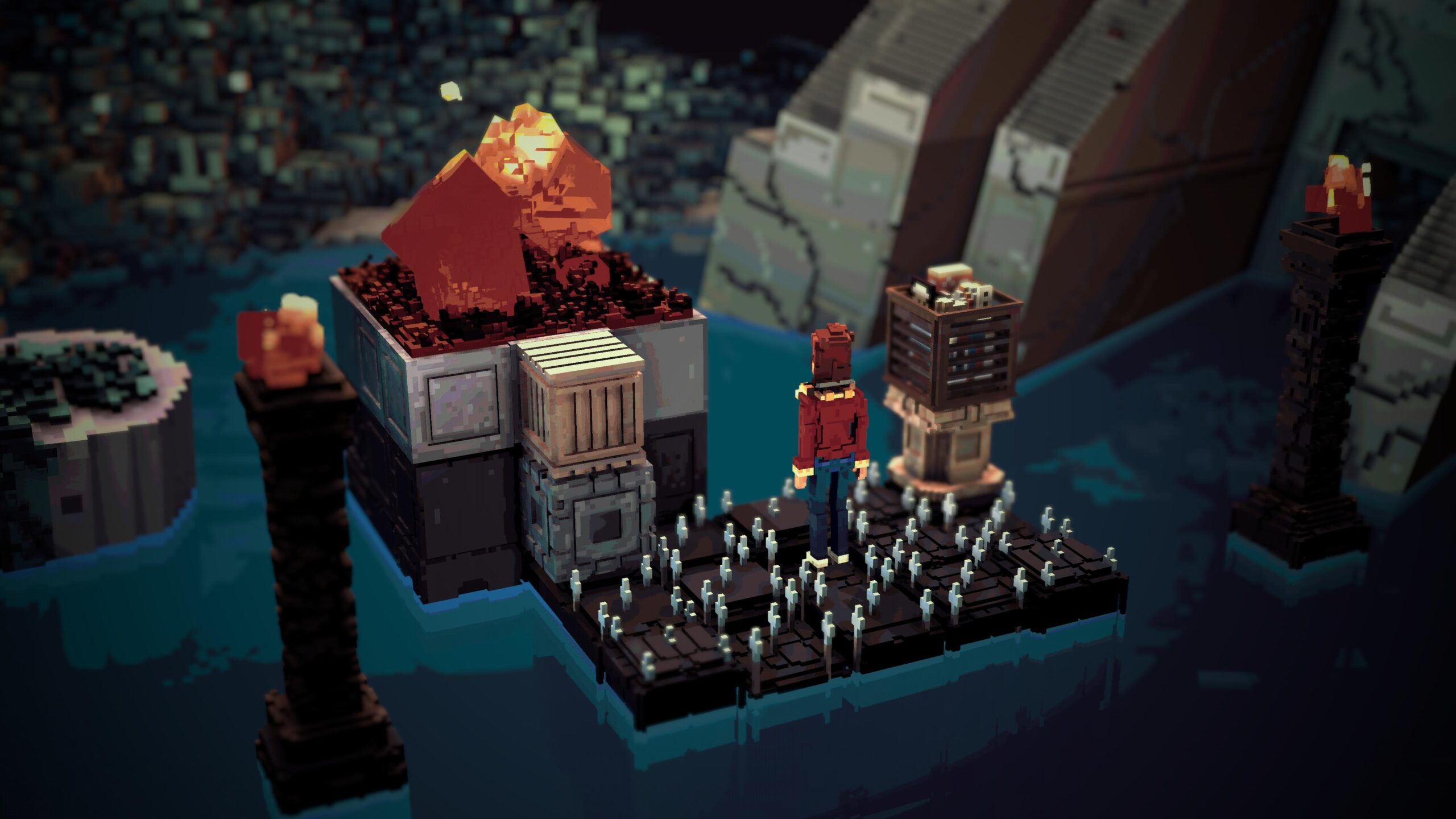 The excellent game cycle of Bonfire Peaks not only helps to enhance that exploration facet but also clears one of the characteristics that are not usually liked the least about these types of games (at least those who are not so used to playing them): the frustration. Indeed, each level is still challenging, so much so that it is almost exasperating. Still, the very design of the game makes it easy for us to get in and out of the puzzles whenever we want and even to look for alternative ways to get boxes in the outside world to continue advancing without the need to complete all levels.

There is a surprising connection between the theme of the game and what we do in it; one can draw lines between the game boxes and the life experience gained by the way we use it to shed an intoxicated past that we no longer want. Also, in how what arises from that burning is a reward in the form of a box, that is, experience, that we can use again to advance in introspection. Sometimes, these units of knowledge have to be destroyed to be helpful, and how it is always necessary to know how to apply them because if they are not just obstacles that frustrate us by preventing us from passing. 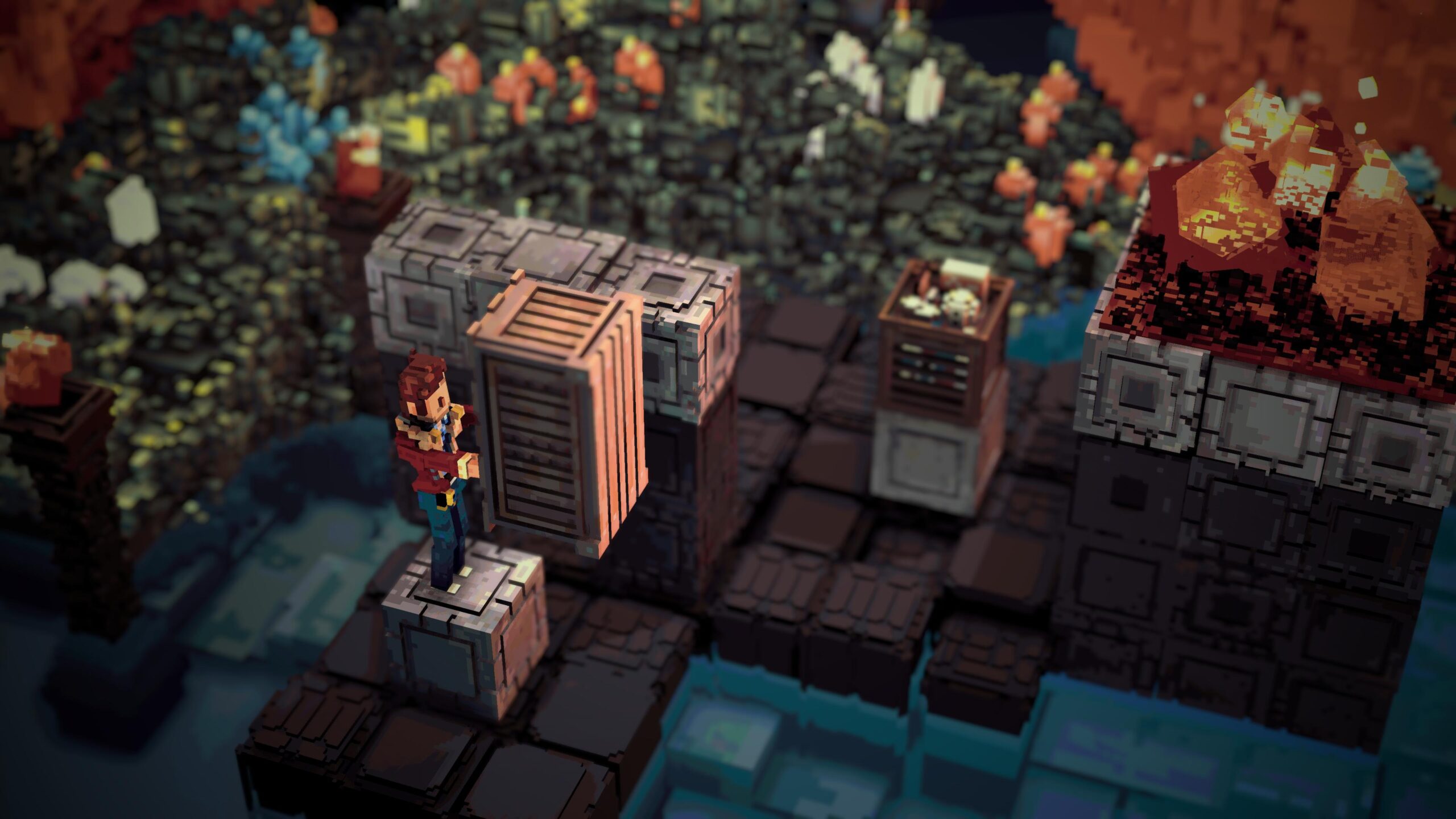 We can even interpret the attachment that we usually feel in these types of titles to a point in the puzzle where we believe that we have found the solution. Still, in reality, we have not reached it yet, although we have taken many steps to get there thinking that we have. “After all the laps I’ve done,” we say to ourselves, “how am I going to restart the level and lose all progress? I’m about to get there!” . There is something of poetry in that feeling of erasing everything, starting from scratch, from another perspective, with more calm and trying to give another approach to the problem. At that moment, the seminal concept of this genre fits with the Bonfire Peaks narrative itself, and the same magic occurs as when we manage to solve a puzzle.

This reflection does not emanate exclusively from the gameplay but is anticipated by an atmosphere that both its visual and sound sections take over. On the one hand, its voxel-style graphics manage to make a technique work that does not seem to fit quite right (and here it does, partly due to the very nature of the game, but also due to the good technical work that there is and the games of lighting and blurring that are made), and on the other hand, the sound that accompanies us is always subject to our interaction with the game, it never seeks more prominence than it should have. At the same time, its calm music and the constant crackling of the bonfire generate an atmosphere suitable to let us think in our way. 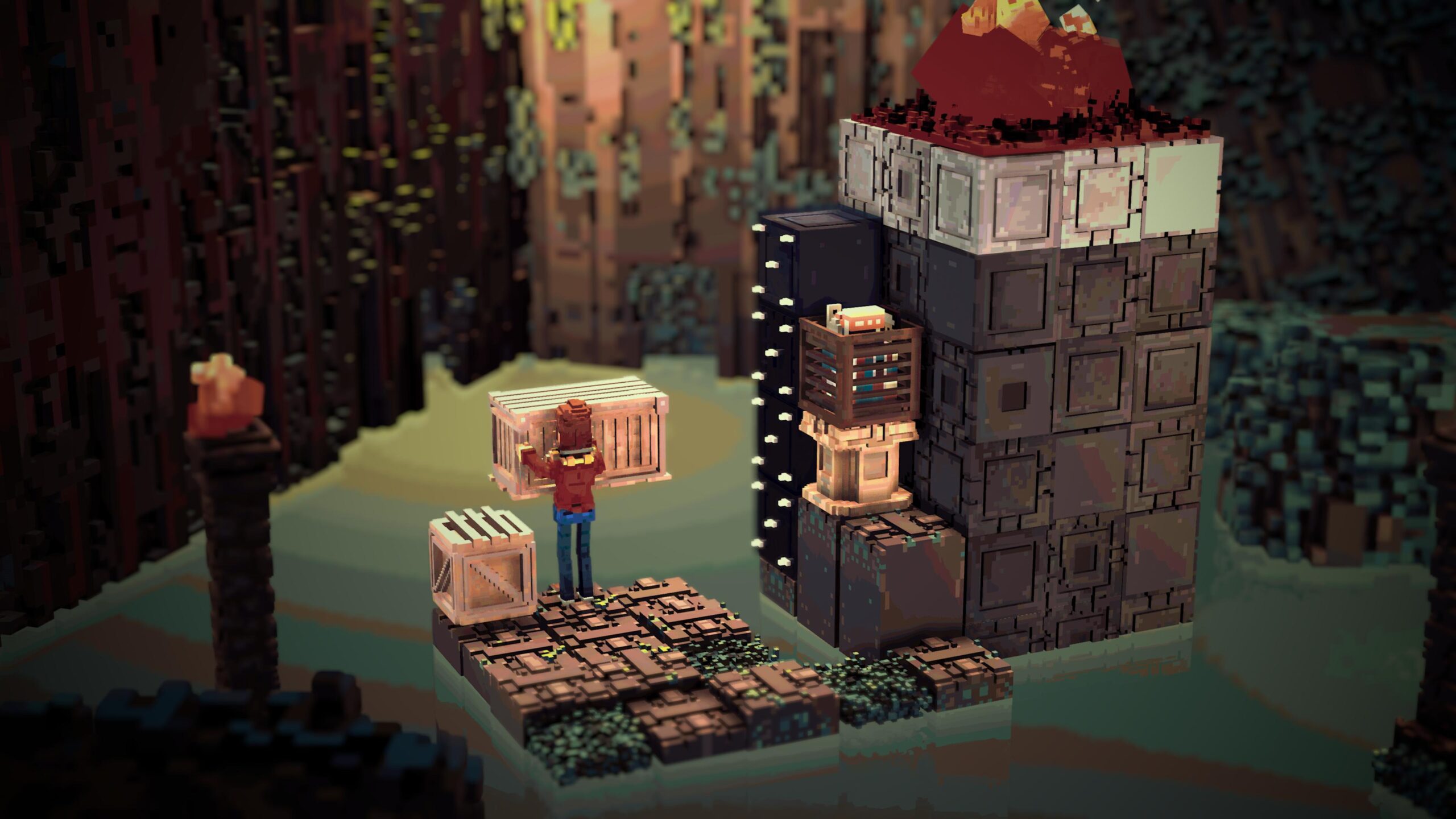 Perhaps there is a moment of rupture of that immersion in the game, and it comes from where it could worst come: from the controls. The handling of the main character of Bonfire Peaks prioritizes the resolution of the puzzles over the credibility of his movement on stage, which sometimes generates somewhat absurd situations that break the immersion. It’s also not that it ends up being a perfect control system, creating some puzzling moments when we focus on solving the puzzles. As it does not end up standing out in either of the two intentions, neither in being an organic and credible movement nor in being precise for solving the puzzles, it is something that we can see as a problem; fortunately, it is easy to get used to its control scheme, and there will be particular moments in which its inaccuracies mean something truly annoying (in addition, players can quickly solve any involuntary failure by pressing the undo action button that is available in an unlimited way).

Bonfire Peaks has everything you need to enchant Sokoban lovers: challenging puzzles with excellent design, good difficulty curve progression, and constant reinvention of its rules. It is a good work that almost supposes a breath of fresh air within the genre because it also boasts a beautiful graphic section and of a plot that not only serves as a common thread but also connects with the game’s mechanics (as we have already seen in previous works by Corey Martin, in fact). If he fails at something, his approach to puzzles can generate dissonances at certain times, such as in the control scheme or the design of its central stage. However, these details will matter more to those who have no previous experience with this type of puzzle. Games and look for a reflective work than those who come for the puzzles. It works for both kinds of audiences, which makes it an excellent and highly recommended work.

We prepared this review with a digital review key for the PS5 version of the title provided by Evolve PR.

Resident Evil 5 and 6 for Nintendo Switch already have a free demo on the eShop
October 10, 2019

Battlefield 2042 would have only a score of weapons and the community does not take it well
November 8, 2021