From the creators of the Bit.Trip series, famous for making endless-runner platformer, comes Bubsy: Paws on Fire!

Bubsy was one of those characters that were created during when the 16 bit-era was popular, although, not all those characters achieved lifetime fame such as Mario or Sonic. In fact, Bubsy did not have a good start, and his lack of charisma has come to an end back when  Bubsy 3D released in 1997.


That would be all for this wildcat if Accolade hadn’t regained the license with the intention of giving a new opportunity to the character, and after the first title released two years ago now return with a sequel Bubsy: Paws on Fire! , developed by Choice Provisions, creators of Tharsis, Laserlife and above all the Bit.Trip series.

Bubsy & his friends vs. enemies

The brief history of the game presents the Bubsy and his friends’and other characters, including the Woolies, vs. our enemy introduced back in the first game, Oinker P. Hamm and his plan to capture every animal in the universe for his Amazootorium.

You do not need to know anything about Bubsy or previous titles to enjoy Paws on Fire! , since the game doesn’t present a deep storyline which makes it accessible for newcomers.

Bubsy Paws on Fire is a platform game in the most classic style. The creators of Bit.Trip has implemented the mechanics that have given them the most success,  endless platform runner, where our character advances from left to the right of the screen non-stop and the objective is to avoid obstacles and grab some kind of collectable that increases our score. The game has online leaderboards, so this will allow us to know how good we are in each phase compared to friends or the rest of the world. 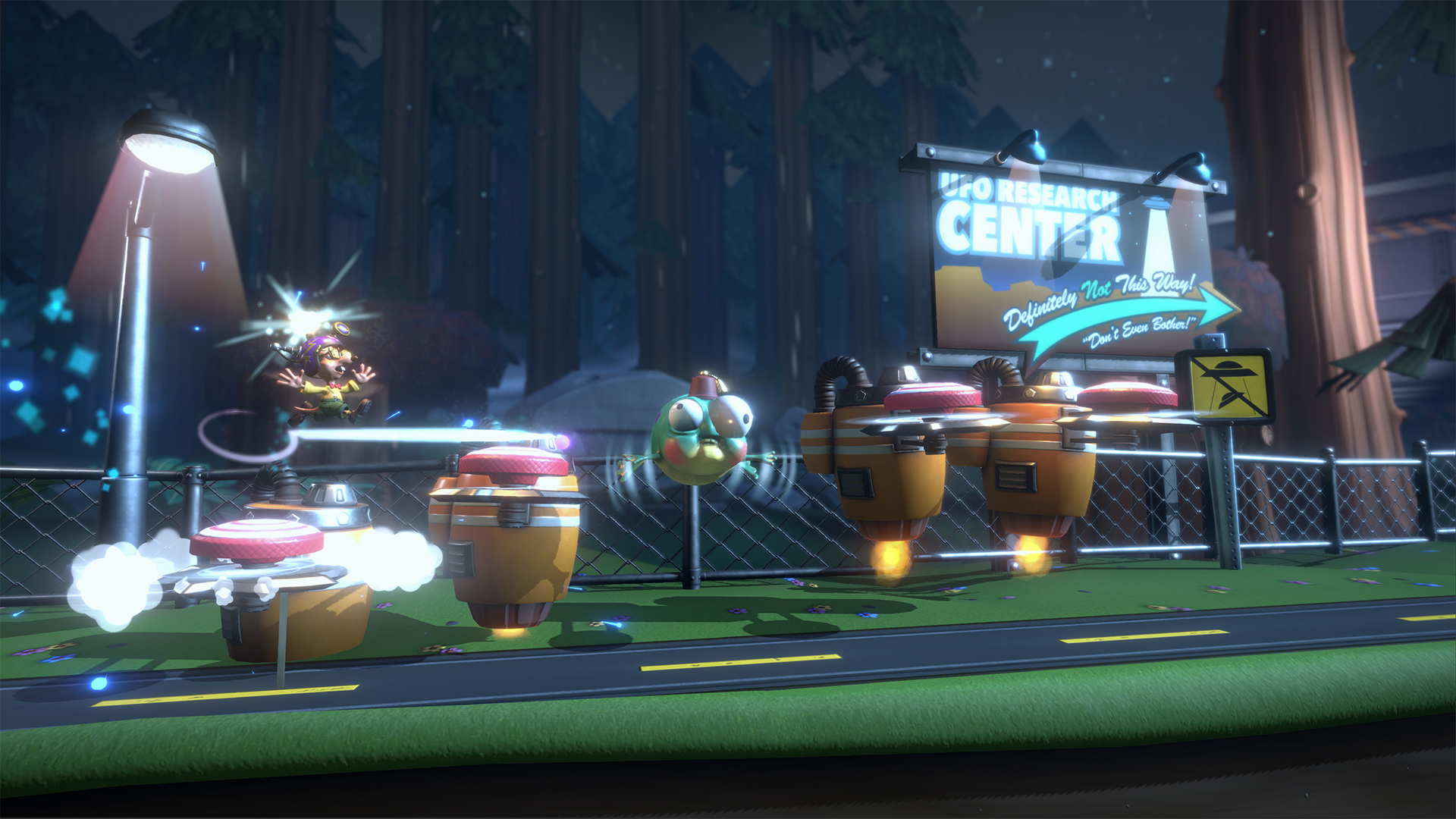 Bubsy: Paws on Fire! includes more than a hundred levels divided into three themes.  In order to advance and unlock new levels you need to overcome a certain number of stages, and each can be played with three characters: Bubsy, Virgil and Woolie. Reaching the goal is easy, even too easy, so we will hardly have problems completing the whole game in about four hours, although you can skip some stages and you can reach the final boss of each world by leaving a handful of games without playing.

Repeating each stage with different characters sounds boring, but it is not. Each character has their own abilities, and the stages completely change according to the character you pick. Bubsy goes with a pair of jet boots that propel him into the air and make it easy to plan, and he also charges against what is in front of him with an onslaught, eliminating some enemies and explosive boxes. In the air, this impulse serves to increase our time more without touching the ground, which is useful and sometimes necessary to avoid falling into traps. 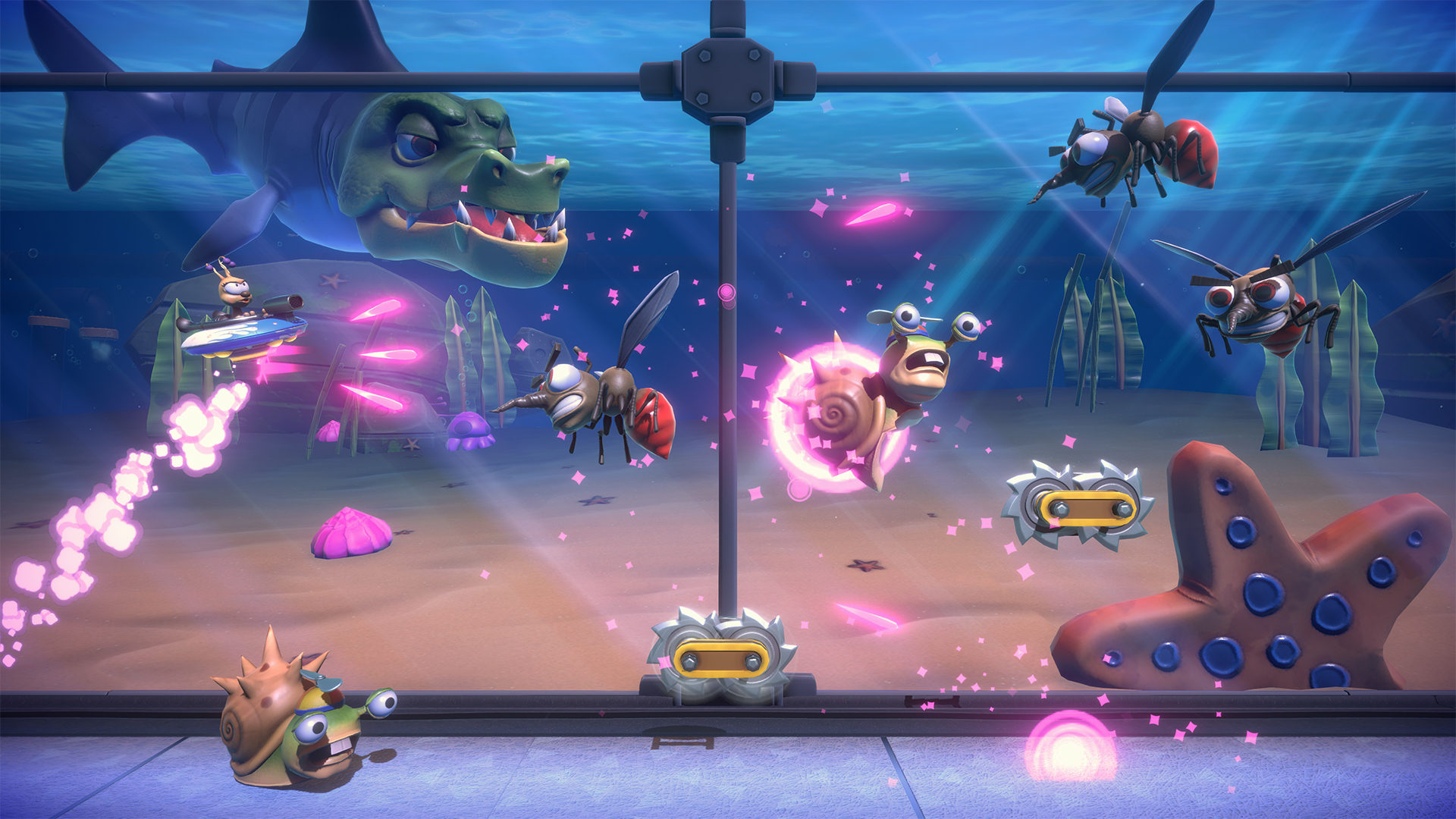 Virgil is similar to Bubsy, but has a movement to slide under objects and a double jump; They usually level a bit more difficult than Bubsy’s. Woolie is completely different from the both since he passes stages by flying with a ship, so they are more like a horizontal shoot’em up, with shots and power-ups that multiply our shots. In general, we enjoyed the Woolie style more than other characters, but it’s not as challenging.

There is a fourth hero in the adventure, Arnold Armadillo, and his levels are unlocked if we have achieved three medals on one level with all 3 characters. And in addition to the scoring objects, there are three pieces in each character game that form a medal. With all the medals of a level, we can play with Arnold at a level that takes place inside a tunnel – similar to special stages in Sonic 2 -. They are the weakest stages of the game, only to add collectibles. 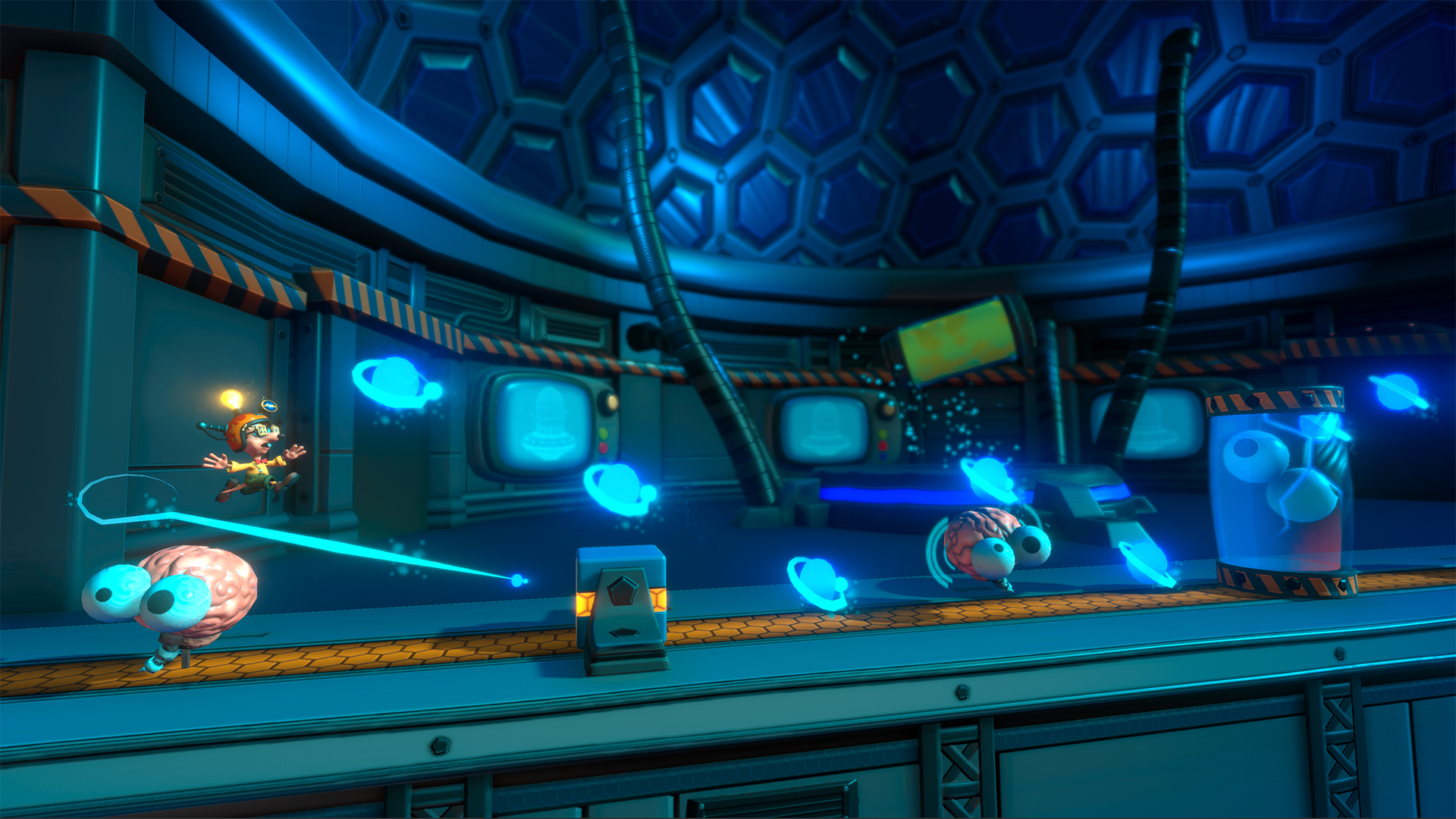 Entertaining … but with only a few surprises

Bubsy: Paws on Fire!  is not a bad game evaluating what it proposes, and it is already more than many other Bubsy releases can propose. There is only a very little to surprise the player, in terms of mechanics and options, and makes you wish for more.

Although depends on the audience it will appeal to players with little experience in the endless runner or who wants to spend a while without thinking much, with stages that are completed in a few minutes.

Each stage has generous checkpoints and death is hardly penalized. Keeping in mind that collectibles are optional and if getting the best score and make it top of the leaderboards is not your thing, which makes Bubsy: Paws on Fire! tremendously simple. It is more a matter of memorizing the levels from start to finish and perfect your runs.

Another aspect that hinders quality is that it tends to repeat a lot of the same situations, enemies, traps, music and graphics. Between worlds, there is something more of visual variations but within the first group of stages, you will not see anything other than the same frogs, balloons and explosive boxes arranged in a slightly different way. 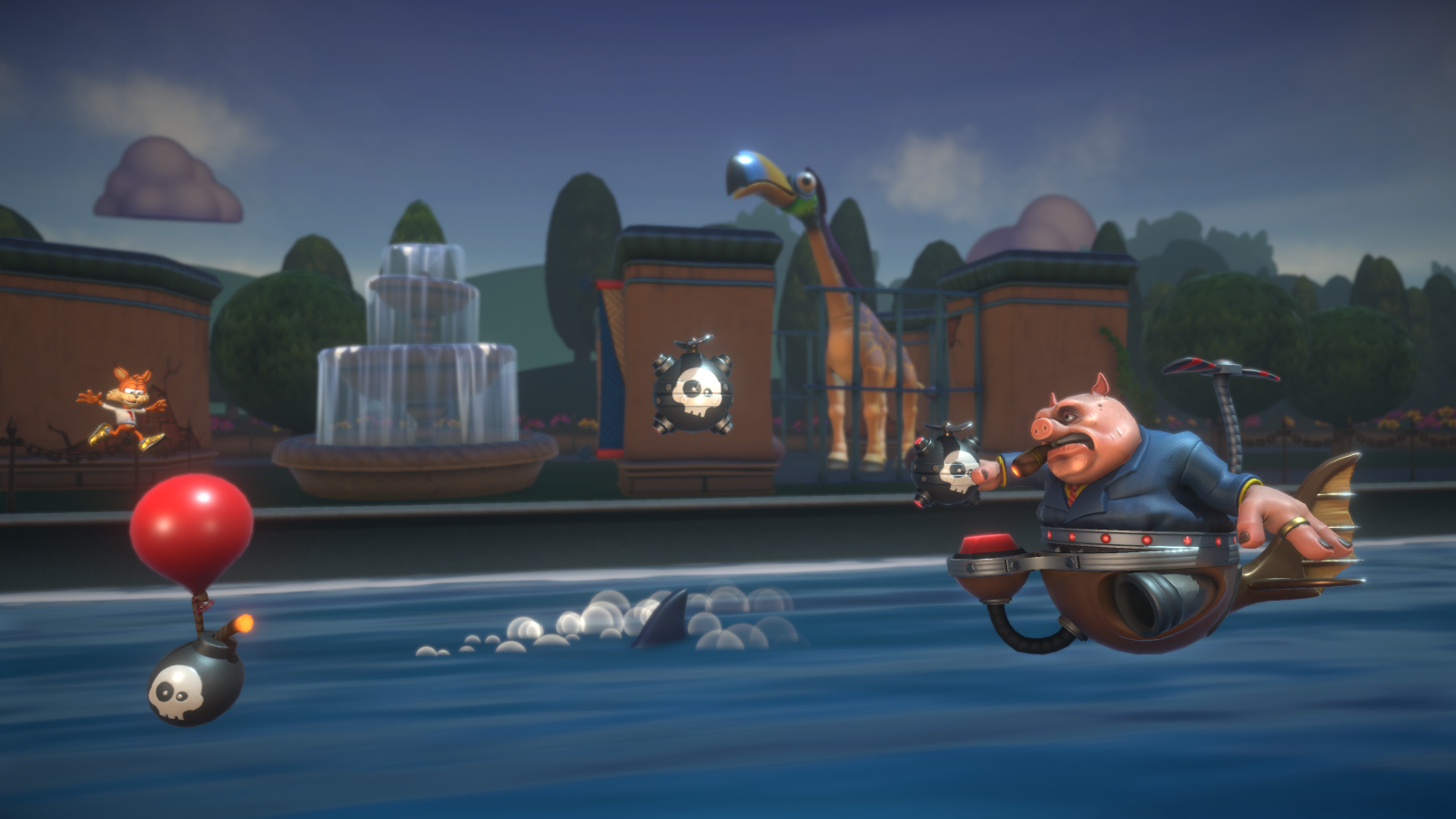 Bubsy: Paws on Fire!  is not available on mobile phones but the technically it ticks every checkbox required for a mobile game. Similar to Runner3, but still with a slightly lower budget. Probably Choice Provisions has taken advantage of discarded designs of their earlier projects and implemented those to Paws on Fire! It does not have much of Bubsy; with a change of characters, it could be a game of any other license.

In addition, there is an option to apply new appearances for the characters. They are purely cosmetic changes, they do not contribute anything to gameplay or abilities. 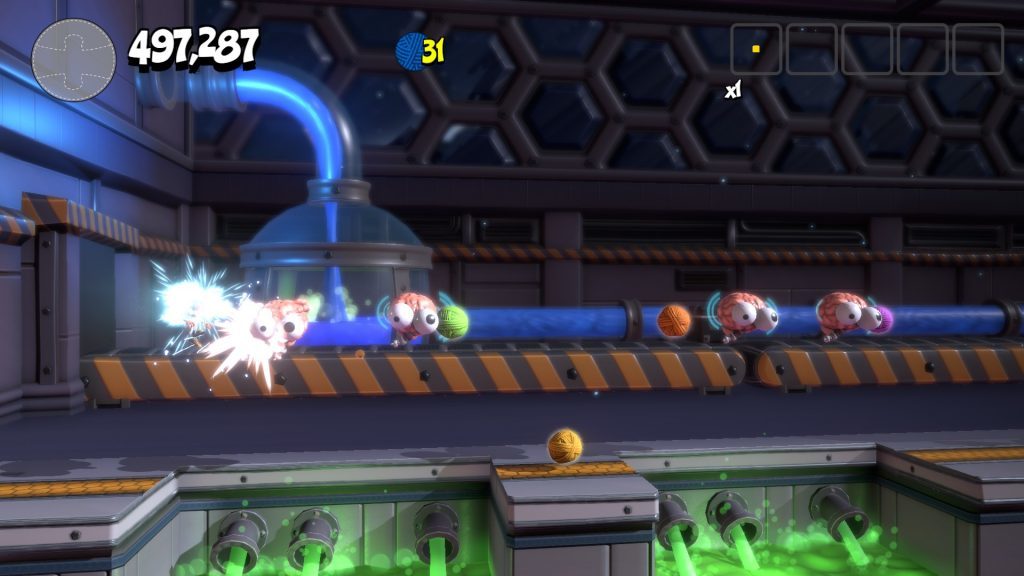 Bubsy: Paws on Fire! will entertain those who seek a modest Bit.Trip like title with different characters. Choice Provisions knows what it does and that guarantees a minimum of quality: the control is precise and this type of games ends up engaging.  You don’t need to invest a lot of time in front of the screen.

Paws on Fire!  may feel too generic,  repetitive and easy. Rest assured it is the best game with this character, and if you’re looking for a game that’s entertaining and not too complex,  hop on!

We have prepared this review with a digital review code provided by Accolade for the PS4 Pro version.