Minority Media’s Time Machine VR takes you to the depths of Jurassic era. It was in Early Access where, many improvements and changes applied to the game (thanks to the feedback from early adopters), before its final version. Now, Time Machine VR is much more polished and complete, so we can finally enjoy it to the fullest on both HTC Vive and Oculus Rift VR Headsets.


The game’s story takes us to a distant future where a virus is destroying the human race. Apparently the origin of this virus is related to the prehistoric marine wildlife, so our mission is to travel back in time so that we can study different animals to find traces of the virus and make a cure in the present. 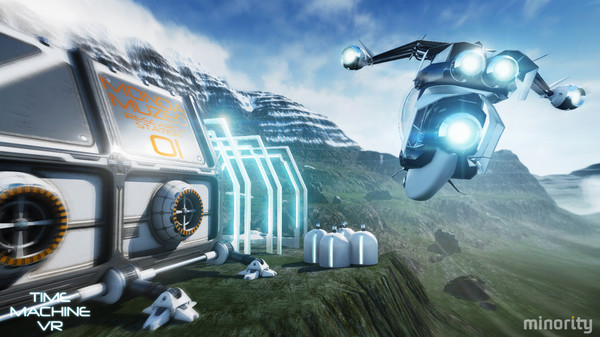 When you start the game there is an introduction after that, you will be playing a tutorial mission where the game explains how to control the pod in which you navigate, This pod can fly and also dive underwater such as a submarine. You see everything in the first person, and to control the pod you need to move left analog to propel it forward and reverse and the right analog to rotate the camera also, ascend or descend underwater. The triggers will serve to activate skills of your pod, once pressed a floating menu will appear in front of you and among many abilities you can slow down time, which will protect you for a limited time and also gave you the chance to study dangerous marine predators.

During our missions an AI interface companies us, by giving us clues and hints about what we should do in almost every moment of the mission and guides us through the abilities of the pod.