Japan Studio redefines virtual reality with an excellent platformer that players will fall in love with every aspect of it.

We have always said that virtual reality is taking its first steps and that it is normal that many games fail to get the full benefit that the medium can give of itself. But, from time to time, a team manages to set the bar a bit higher and show that virtual reality can offer sensations and experiences simply unmatched. Today is the case of Japan Studio.

Astro Bot Rescue Mission is a platform game in three dimensions for PlayStation VR, which encourages us to go through different levels looking for small robots lost and hidden on the stage. The structure could not be more classic: we have to complete several levels to reach the final boss, which is blocked after a minimum number of rescued robots. We defeated the boss and we went to the next world.


The gameplay combines the control of Astro Bot, our little protagonist, who can run, jump and punch, with our control. Our command appears on the screen, and depending on which enhancer we unlock in the phase, it will also allow us to throw strings, water or shurikens, for example. We will also have to move our heads to break objects or dodge attacks, making our virtual person come into play as well.

In our search to find the lost robots, we will have to pay attention to the environment, since there are also some camouflaged chameleons that, if we find them – just looking at them for long enough – will unlock an additional level, more challenging than the normal ones. 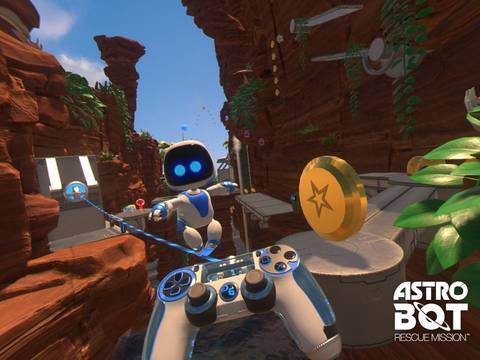 So, we combine traditional gameplay with the possibilities of virtual reality, using a traditional control for the main character as we look everywhere to try to find the hidden robots, we crouch to dodge an attack, we blow a robotic dandelion to unlock a platform or we dance with a plant can only move our head.

It is a game full of details, which keeps you constantly with your mouth open and that makes you feel like a child. Whether it’s a small animation that brings you a smile, or an epic moment in which a huge enemy appears on screen to surprise you … Astro Bot Rescue Mission has always kept us spellbound, totally immersed in their world and enjoying every second, making Let’s forget we have a virtual reality helmet on.

Another aspect that we love about this title is the constant variety it offers. No two levels are the same and all have some particularity to make them different. Little by little new situations are introduced that force us to use new attacks, to dodge in another way or, to indicate a specific case, to use the command vertically to throw a shuriken through a fence. They are small details that make the game always interesting. 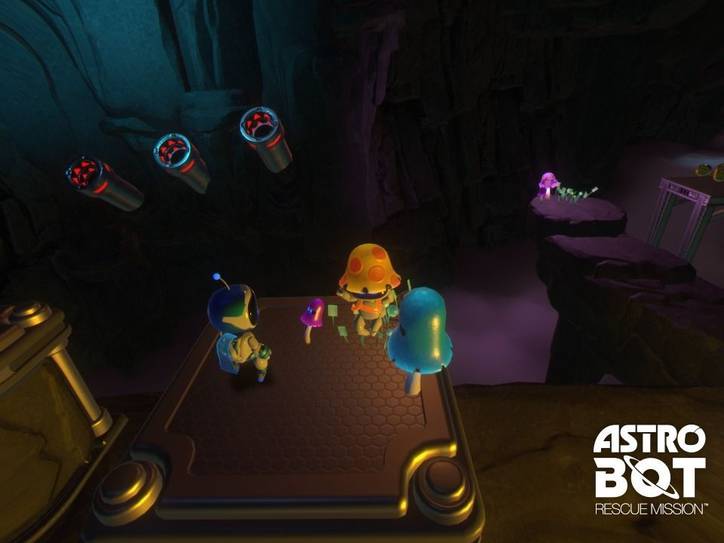 The same goes for the final bosses. All have their own mechanics more or less original, although very inspired by other classics of the genre. Even so, it is always interesting to discover your routines of attacks, to avoid them and to counterattack, and, to make it more exciting, we can only receive three touches before restarting, unlike normal levels, where we can continue as many times as we want from the last point of control. 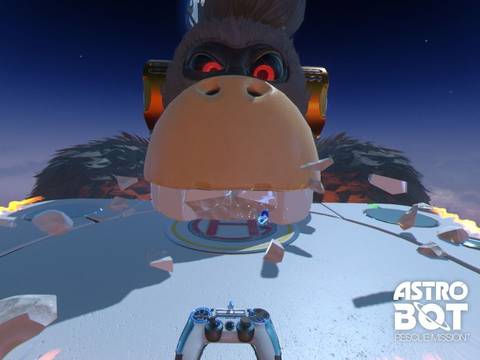 Astro Bot Rescue Mission is not excessively long, but it lasts longer than adjusted and we prefer quality and variety before doing 40 times the same to artificially stretch it. In total there are 26 main levels and 26 challenges, and if we want to do everything 100%, we can make its duration extend significantly. We calculate that doing everything perfect can take about 10 hours, depending on the skill of each one and the luck we have to find the robots or the chameleons.

We also have a minigame in which to get decorative elements for our ship. By getting them we can see it on our command and explore it to appreciate the enormous level of detail they have, and then they will be placed in one of the different themes with which we can adorn the capsule and interact with them. It is a great little detail, that in addition to giving a bit more of a window to the extras allows us to appreciate the artistic work behind the game.

A universe of another planet

Astro Bot Rescue Mission looks and sounds great. Graphically it is an authentic past, with scenes and characters full of detail, fantastic lighting and very careful in general. The same thing happens with music, with the main melody reinterpreted for each stage, very accurate effects and, in addition, making use of 3D sound to indicate the position of the robots to rescue. 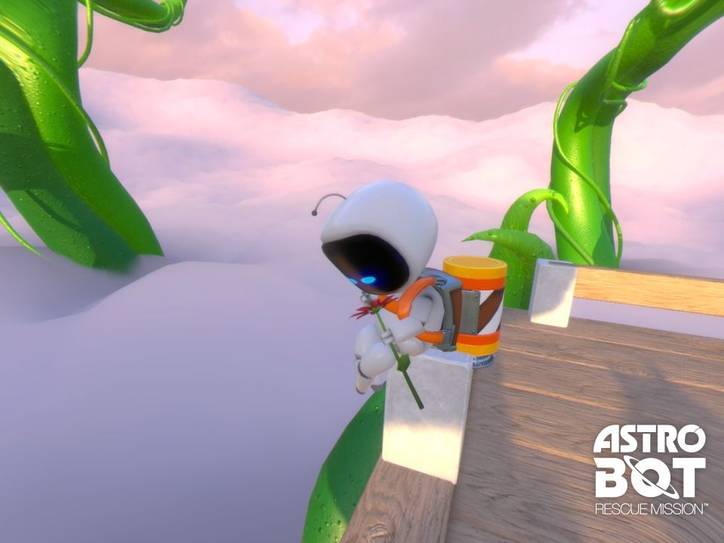 Our only downside is that in very, very specific moments, the camera can give some problems. The camera moves automatically when advancing Astro Bot, but only forward, never backward, so if we leave something behind or want to explore we may lose sight of the character. It is not serious or that much happens, but something that could be improved. 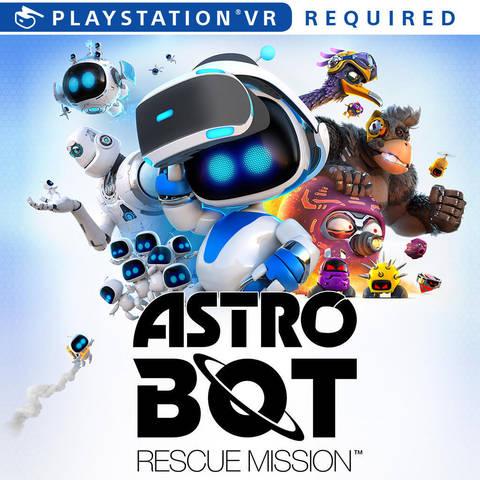 Astro Bot Rescue Mission is, together with Moss, a must-have game for virtual reality headset owners and who enjoy playing platform games. It is one of those titles that show you what the medium can give you, that surprises you every second, that constantly entertains you, and that makes you feel like a child throughout the entire adventure.

One of the best compliments we could give to a title like this is that it seems one of the great platforms Nintendo: beautiful, fun, varied, original, with a difficulty well measured and that manages to carry the hardware for which a little step is launched beyond. We take our hats off to Japan Studio, and we encourage you to give a chance to PS VR that will clear any doubts you may have about virtual reality.

We have done this review on PS4 Pro with a review code provided by Sony.