Adam Jensen returns with a new adventure that will delight the fans. Stealth, exploration and action in a fascinating near future.

Deus Ex is one of the most important, influential and a unique title in the history of gaming. The impact it made when launched back in 2000 continues to resonate today, making it not only a cult game but a masterpiece because of its perfect combination of RPG, first -person action and stealth elements, along with its fascinating history and ambiance.


The first title was full of possibilities and with an unprecedented freedom that opened the eyes of those who get to play it and get a glimpse of the full potential still lies ahead. Unfortunately, Invisible War, was not up to par, sentencing the future of the series forever, until Square Enix took the rights and launched a new release titled as Human Revolution. The result was excellent and Eidos Montreal revamped the series from its ashes, gave us a great game in 2011 that kept intact the essence of the original. A lot of freedom, multiple decisions, a deep plot, good characters, and gameplay that worked great especially if you go stealth. Human Revolution became one of the best releases of the last console generation. 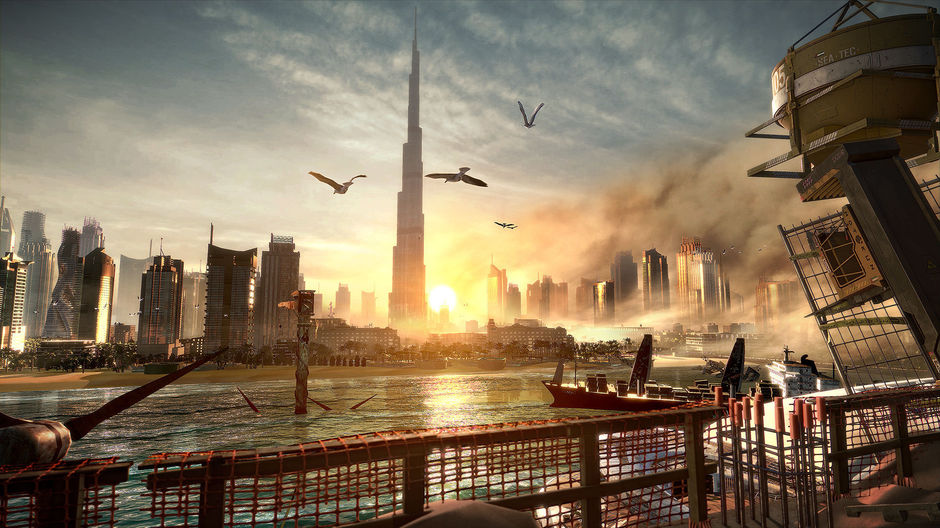 Human Revolution’s success raise the desire and the expectations on Mankind Divided, the direct sequel, especially considering that we had to wait five long years to return to this fascinating world of science fiction.

To avoid getting into the details “spoilers,” and even more so in a game with so much narrative burden as the present one, to say that this time the story is set two years after the events of its predecessor, though follow none of the possible ends of that. Knowing the origins of this adventure is essential but if this id your first time playing Mankind Divided, don’t worry! There is 12 minutes long intro summarize what you have missed. One of the most important and serious incidents that took place in the previous game sparked a wave of fear and hatred against the Augments , people with robotic implants that improve their capabilities, thereby dividing humanity between Natural and Augments, an uncomfortable situation that has become the trigger for many conflicts and incidents such as terrorist attacks and an increase in criminal activities. 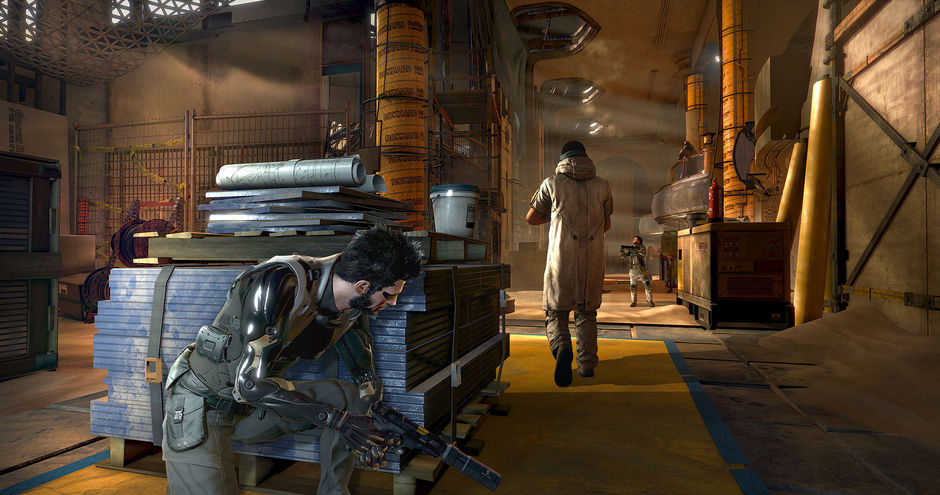 Maintaining the usual style of the series, we will have to unravel a complex web of conspiracies and plots in entering large facilities, the mafia, and even secret organizations. Along the way, you will face many moral dilemmas and serious subjects that will get you think and question your ethics and how you think and decide about certain issues. These elements are also studied in Huma Revolution as well, and this is what made these series so special. In general, the development of the plot is well managed to keep us hooked from start to finish. Thanks to developers, how well they know to keep the mystery and create constant twists, although the beginning is somewhat slow and takes the time to introduce us the characters and basics of the story.

If you played Human Revolution, you could probably tell the many similarities ” Mankind Divided is superior compared to its predecessor, but with little upgrades here and there that have been polished, ” you can simply imagine what you are going to find, as it offers the same but better. 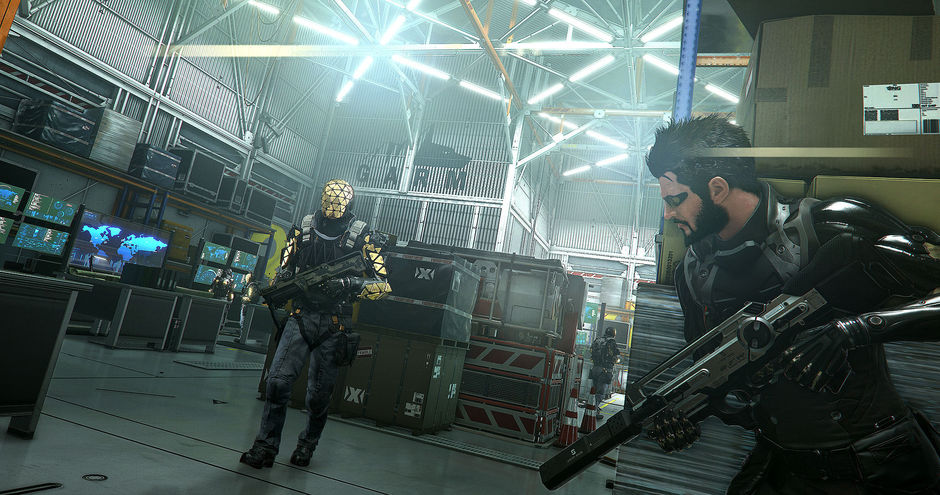 It feels like playing the same game from five years ago but with a new storyline, new missions, and better graphics. Eidos Montreal played it safe, rather than trying different, which is not bad, but after all the wait we were expecting a bit more. Therefore, we have an adventure RPG in which we have to beat all kinds of missions, major and minor while exploring various locations. The interesting thing is that beating these objectives have many possibilities, You are free to act in one way or another to solve these missions. 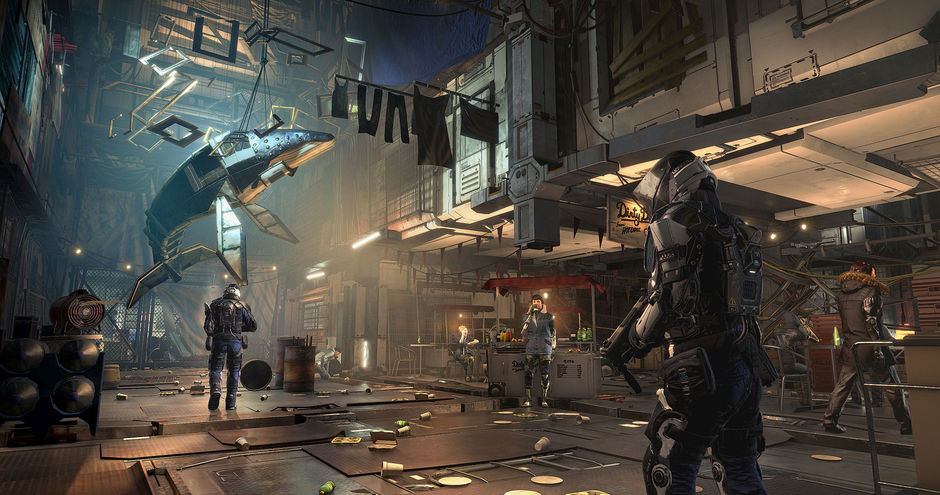 Thus, you can opt for stealth to infiltrate sites dodging enemies without raising the alarm, to seek alternatives and hidden routes to our goal or you can go all guns blazing, full-action just like the previous game. Even we can solve many missions simply by using our gift of gab to convince our partners to do what they want.

It is an adventure that will not stop making decisions with their consequences , either choosing answers during the dialogue or through our actions and playing style, which is very well implemented and that will not stop surprising to see how we influence the world in one way or another. You can finish the entire game without killing anyone, so nonlethal pathway is also an option.

These mechanics also applies to secondary missions, which can trigger some events or otherwise depending on what we do in those missions, introducing us to new characters, characters appear and display additional and optional objectives in other missions. The world reacts to us and feels alive, and that’s one of the best feelings to get from Deus Ex, encouraging at all times to explore every corner of the level to look for secrets, documents, objects to accomplish missions. Mankind Divided is an easy game to play if you take your time. It is not made for fast games, and you should have at least a couple of free hours before digging into it since you’ll want to search every corner to read everything that you find and not to let a single thing pass by you.

There are new gameplay element and introduction of new abilities such as we can become invisible, remove noise we make to sneak more effectively, heavy lifting and a long list of possibilities that’s fancier than the last. All augmentations are useful in one way or another, so think, plan and unlock them carefully, those abilities will be your priorities when developing Jensen. 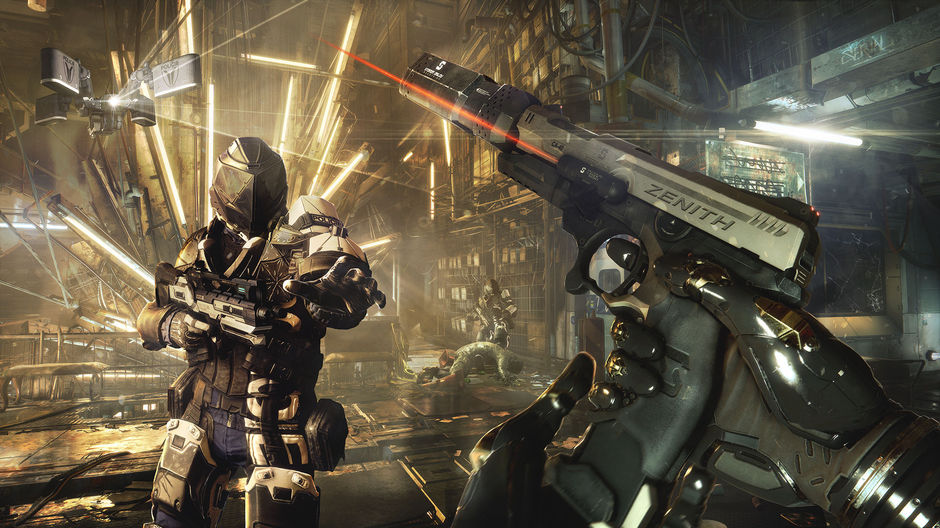 Most of the augmentations that we have available are the same as those we saw in Human Revolution, although they have added a few special things that can not be activated simultaneously, being able to slow down time during the shootings or throwing stun charge from our mecha-arm, to mention a few examples. There are also small details that have been polished to make the experience more enjoyable, such as the cover system works much better now and is more intuitive than before, and can perform even silent executions behind a cover. Also, shootings work better now and are a little more satisfying, not too difficult to aim and miss as before. 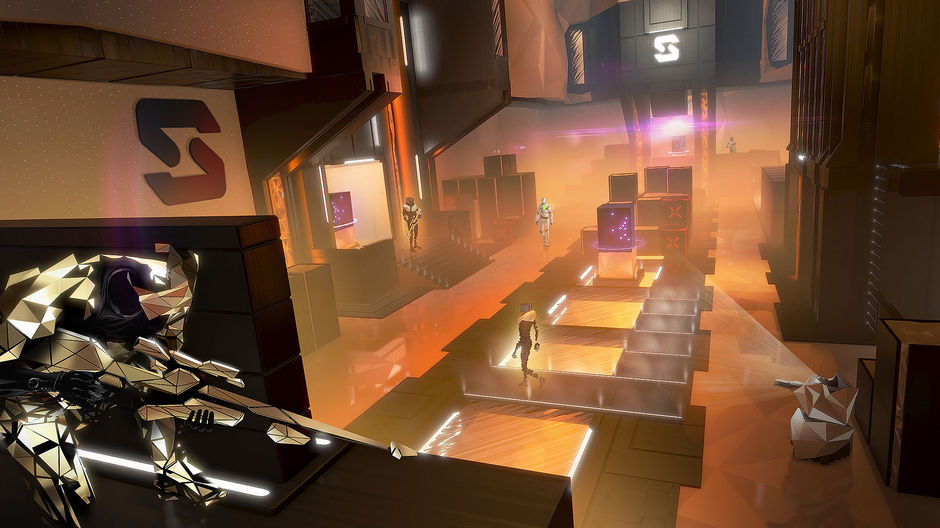 AI can be very poor and unable to react under certain conditions under specific circumstances.  Enemies sometimes may have trouble detect you even when you are theoretically within the range of their vision. Yes, it is not an easy game , as the number of guards in each mission is anything but negligible, so if you do not seen by one, you probably detected by another, and once the alarm goes you will be surrounded in seconds unless you find a good hiding spot or flee far enough so that they can not see you.

As for the levels, we must emphasize how much we liked and how well designed they are. Full of possibilities to interact and use them to your favor, they are designed to encourage exploration and use your creativity when tracing routes or planning your actions. They are not any larger than its predecessor, but they have many floors and full of elements. 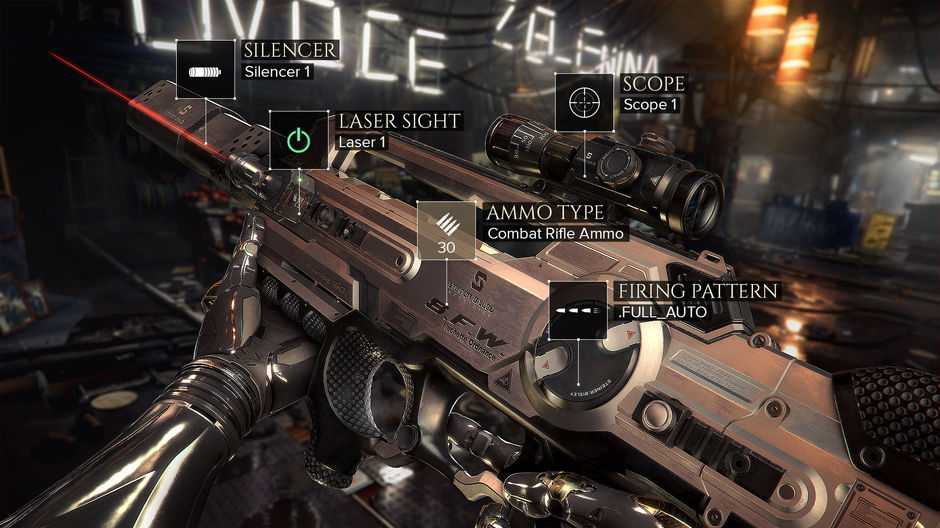 The duration of the game varies, since it depends on too many factors, like how much you invest exploring, reading, talking with other characters, the difficulty in you play, the number of side missions to do, etc. but if you rush you can finish it between 12 and 15 hours, and if you want to fully achieve everything it offers this will take more hours to complete.

There is also a new game mode called Breach, once you are done with the main campaign or looking for a change. Breach is trial missions in closed environments with little room for maneuver to compete and get the best brands and possible points, offering a very traditional approach arcade gameplay of Deus Ex. It has its own story and as you play you can improve your character, but it’s not as entertaining as the main game. 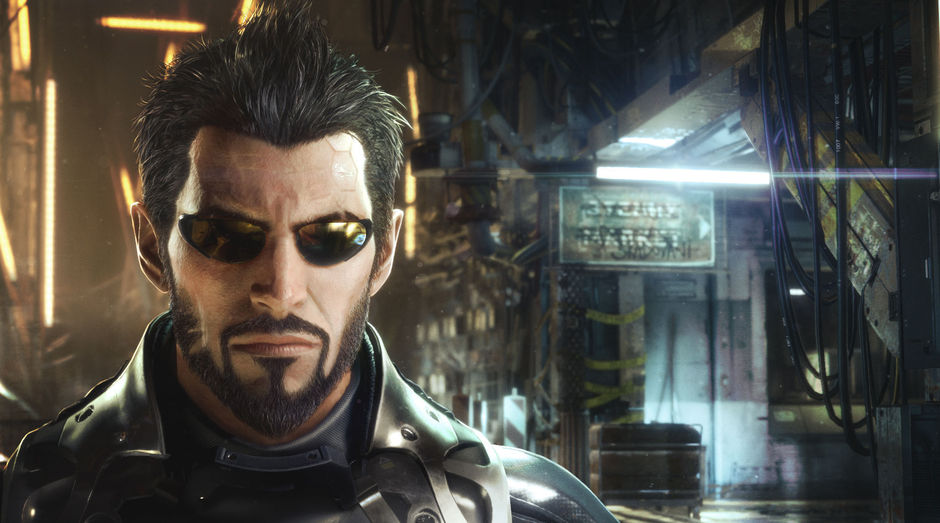 Graphically we find a very striking game thanks to an outstanding art direction and detail to attention put into each and every one of the scenarios, although technically they could achieve more we believe. Facial animations are not realistic during dialogues, other than Adam the modeling of the character faces could be better, long loading times and frame drops in complex scenes are other few downsides to mention. 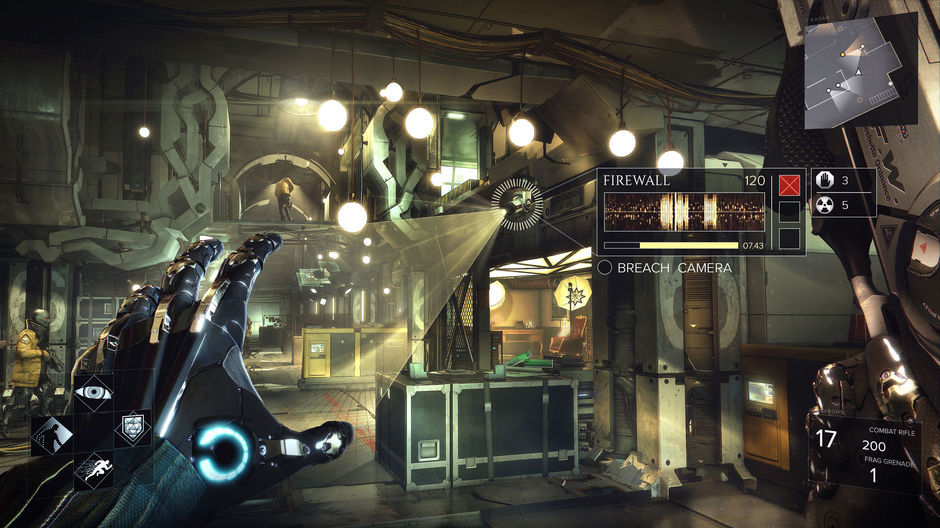 Finally, say that the soundtrack is really good and fits perfectly with what we see on screen while maintaining the same style of what we heard in the previous installment. Rarely takes the spotlight, but is always there, accompanying background and helping to elevate the experience. The effects are also very good, varied and strong, same as Human Revolution. 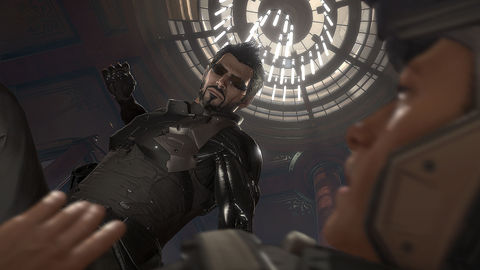 Deus Ex: Divided Mankind play it safe while continuing adventure that rarely ventures into new things. However, the formula still works very well, offering a unique blend of stealth role playing with some action in an exciting universe. And all of this spiced by a powerful story. It is far from perfect and has some flaws that prevent you from going further, but if you liked Human Revolution and wanted more of the same, then you won’t be dissapointed.