A fictional narrative adventure about protecting the environment, presented with a very well made audiovisual experience.

In Other Waters stands out for its perspective like no other game. Our main character performed by xenobiologist Ellery Vas, who answers a call from her scientific friend Minae Nomura in the mysterious depths of the planet Gliese 667 Cc. The unique thing is that we are just a lost AI, and everything around us is a simple, practical interface. We do not see directly fauna or flora or minerals, not even Ellery herself.


We learn about what we have around us through social dialogues and annotations, be it a bacterium or a massive silicon structure. Honestly, a brilliant way to become aware of our environment without resorting to functions that do not correspond to Artificial Intelligence. Although we only see geometric figures along the way, if we put imagination and research on our side, the marine world becomes incredible.

The game created by Jump Over the Age, a study formed only by Gareth Damian Martin, is a science fiction narrative adventure that sometimes reminds of a biology book, other times to the research sections of a Metroid Prime, to Sometimes to one of those primal role-playing games where everything was based on the text, and at other times it reminds us of when we acquired a new technological clunker and began to mess with an interface that we have not yet understood.

The plot takes us to an alien planet hundreds of years into the future. Dr. Ellery has travelled there upon receiving the signal from another doctor that she has not seen in a long time. In essence, the game sends us to the depths of an alien ocean while exploring one of those past relationships that leave their mark, that we don’t know why it ended and that we are submerged in our own depths. But we do not control Ellery, but she finds us: a futuristic suit that allows her to move through the waters, sometimes calm and sometimes dark, of Gliese 677Cc; she communicates with us, and through the interface, we follow her wishes to go to a place, to collect a sample, to immerse ourselves even more … And as a biologist who is, makes us partakers of his trade, which will become our hobby.

The goal is to find Ellery’s old friend, but all on the first planet with life ever discovered, full of animals and flora to catalogue and understand; from the beginning, it is shown that something is wrong with Gliese 677Cc, and the plot is evolving through these channels. Without neglecting that relationship, little by little, the game takes a more typical course in science fiction stories, and increasingly reinforces its environmental message.

In Other Waters is a quiet, slow game, an experience similar to reading a book than an action game, but that does not mean that there is not much interactivity. To move along the ocean, we have to click on the radar, which will show us the following places to which we can transport ourselves by rotating a sort of compass to that site and pressing the forward button. If we stand near an animal or plant, we can take samples, using a section of our interface that rotates two segments until they are joined to collect the sample and keep it in inventory. It is all very tactile, responsive and reactive; we almost wish we had played it in the touch screen with the Switch version instead of the computer mouse.

Those samples will help us learn more about these species, but sometimes they also have a playable purpose. For example, sometimes we will find paths blocked by marine animals that we can drive away by throwing a ball of spores that we have previously collected on them. The ocean of Gliese 677Cc, like ours, is full of different life forms that form a complex ecosystem, sometimes dangerous, as well as very diverse areas: there are places in which we will advance without any concern, but there are areas in which the toxicity constantly lower our limited oxygen level; spaces full of threads of life that will give us discharges when passing between them, reducing the battery that keeps us afloat; and cannons in which the current is so strong that we will have to make use of a kind of turbo that, again, we activate by operating buttons and disks on our interface.

What has amazed us about In Other Waters is the same thing that made us heavy at first. The biologist describes, through text, each one of the points of interest on the stage that we click on: she explains what a reef is like, what an underwater mountain shape is like, the movements of one of the species that populate this oceanic world, the interactions between an animal and a plant … And those descriptions, in perfect English, they house the clue of the path that we must follow in the vastness of the ocean – although there is something in the design that we do not understand and that is frustrating: sometimes the game makes us read at full speed because we are in a toxic zone that kills us if we remain long time in it. For such a calming and relaxing experience, perhaps the complete absence of a challenge would have suited him. 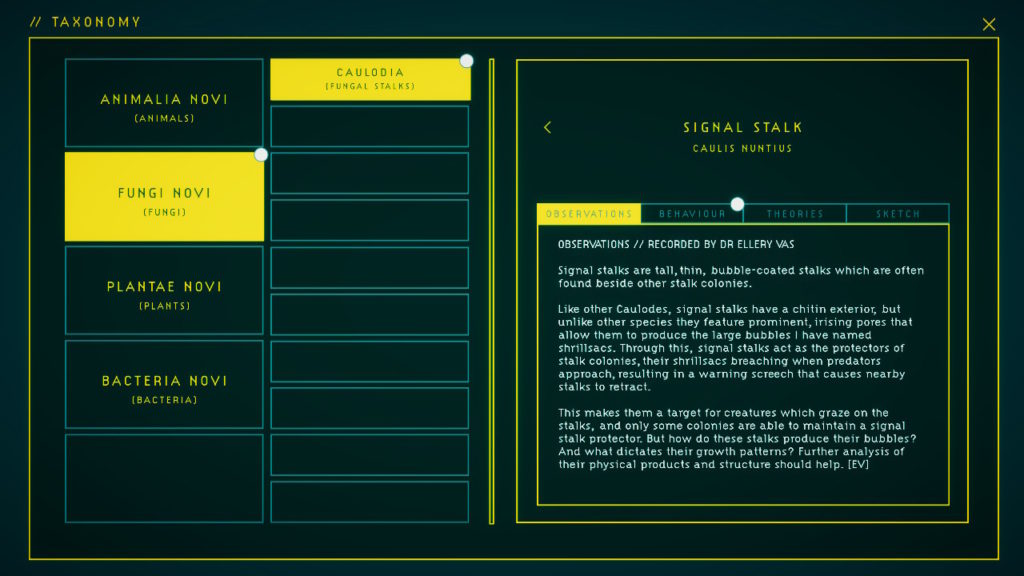 At first, everything seemed very dense, but in the end, we clicked and stopped to read about everything we saw to try to discern how life on this planet works. We even stopped at the base, to which we return between missions, to read the descriptions of these living beings, which are expanded (from the description to the visual sketch, through Observation and theory) as we analyze more samples in the laboratory.

But as you see in the images, these animals, plants and unknown life is shown on the screen in a very particular way: the interface, that diving suit in the depths of the ocean, only shows us geometric shapes on an orographic map: triangles, circles, propellers and other small two-dimensional designs that we learn to identify and differentiate from each other by the way they move, by how they behave before our presence or that of another being … If the representation of this alien world were carried out only through the interface, we could classify it as a daring product in the visual, which intelligently takes advantage of the lack of resources that is supposed to an indie studio.

But the reality is that all the missing visual realism is in the sound description: we may not see what those underwater animals are like, but we hear them. The blackness of the deep ocean may not be distressing only by showing us a black screen, but it does when the soothing music that plays throughout the game suddenly turns off. The musical compositions are just great, but the sound effects, representing the life of the planet, our swim in the water, and the mechanical movements that cause the interaction with the interface, are wonderful.

In Other Waters, is perhaps not too original in the science fiction part of its plot, but that transmits an always necessary message of preserving our planet by making us interested in how ecosystems and the life of a place work. Imaginary. It is true that the plot, throughout its six hours, has its ups and downs and even resources to praise a story that is not exactly long. However, the intelligence with which the player’s interaction with their environment is approached, that interface that we have not stopped talking about throughout the text, combined with a cautious sound section, make the game a very suitable relaxing experience for the times that run, highly recommended for science fiction fans, those who like biology and those who enjoy playing titles very different from everything else.

We prepared this review on a Nintendo Switch with a digital review key provided by Evolve PR.