Indivisible was announced 4 years back in 2015, although we cannot deny that when the creators of Skullgirls announced it we had our doubts. The transition from the fighting genre to an RPG could be very risky for Lab Zero Games. Still, Indivisible takes advantage of the strengths of the team, be it mastery with animation or frantic action and fused it with a turn-based system, but much more agile than usual.


The end result has been very satisfactory, an excellent RPG with an exciting combat system, platforms, a bit of Metroidvania exploration accompanied with great audiovisual section, wrapped in that inspiration to the 2D RPG of the never sufficiently vindicated Valkyrie Profile of Square Enix.

A quest of searching for answers

From the outset, we are going to say that some aspects, analyzed with a magnifying glass and independent of the whole, may not be up to the genre. One of them is the story, enough for an adventure, platforms or action game, but we can’t really compare it to the purest role-playing games such as the Valkyrie Profile as mentioned earlier. 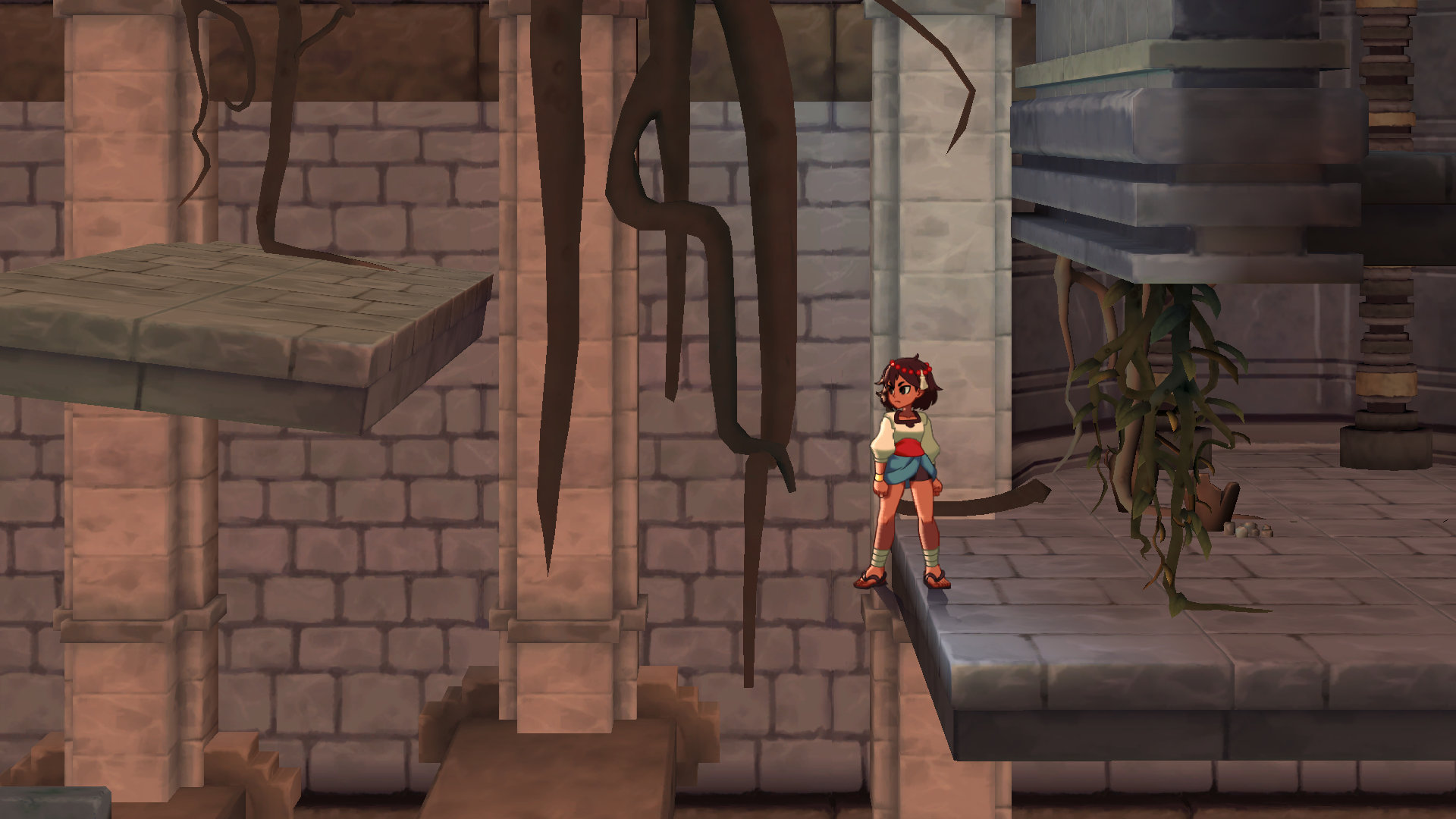 After a brief sequence in which we see a fight against a great enemy, the plot advances 16 years later, with our protagonist Ajna practicing the basics of combat. Following morning the village is attacked by strange enemies that kill everyone who crosses their path. Moments before her father’s last breathe, he regrets not having told everything about Ajna, a girl who, besides being brave, can see that she has some extraordinary power.

Throughout the trip, more characters will be joining who will have their role in the fight, but this shows that the narrative is quite flat. Friends join our cause almost instantly, without a significant background; No matter if she is a young woman or a prisoner, everyone puts her life in danger virtually without reason. It is true that the general tone is youthful and that each one of the more than 20 companions has its personality – it is what encourages us to want to see more – but we simply cannot believe the dramatic moments. Indivisible is an RPG for its playable systems, not for the depth of the plot – which is not a serious problem either.

A light touch of ‘Metroidvania.’

The team itself has admitted that in some stages of development, it seemed to have two differentiated games in one, although in the end, it is all cohesive. On the one hand, we have the Metroidvania platforms and exploration, which means that it does not consist of only moving from left to right: there are landscapes, open or more similar to dungeons, with floors, rooms and a bit labyrinth-like routes. 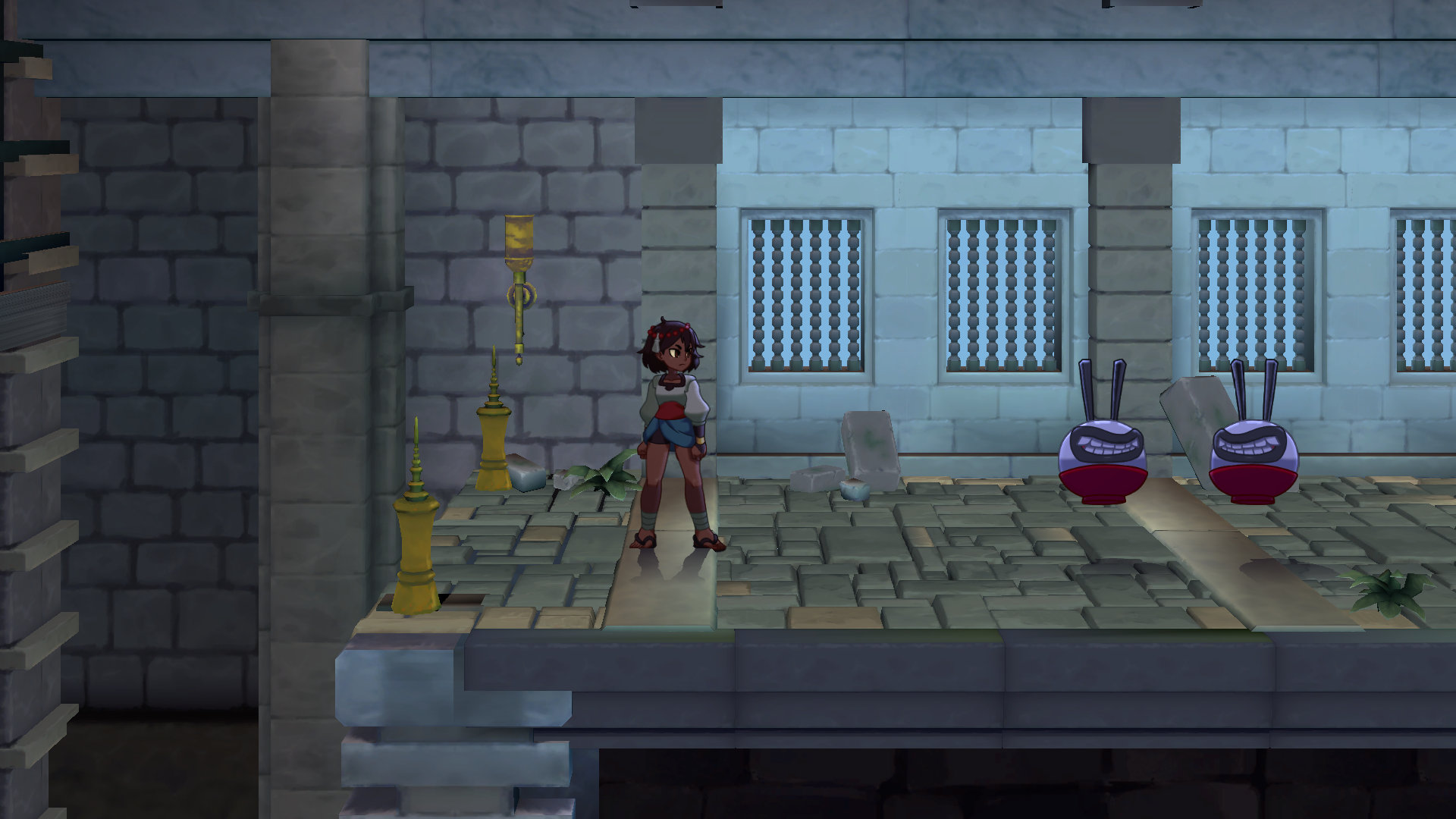 However, this design is not excessively complex, so do not expect such complicated maps that will make you continuously look at the map. Most alternative routes lead to some kind of collectible or confrontation against enemies, but there is also no excessive backtracking or need to go back to discover new secrets. 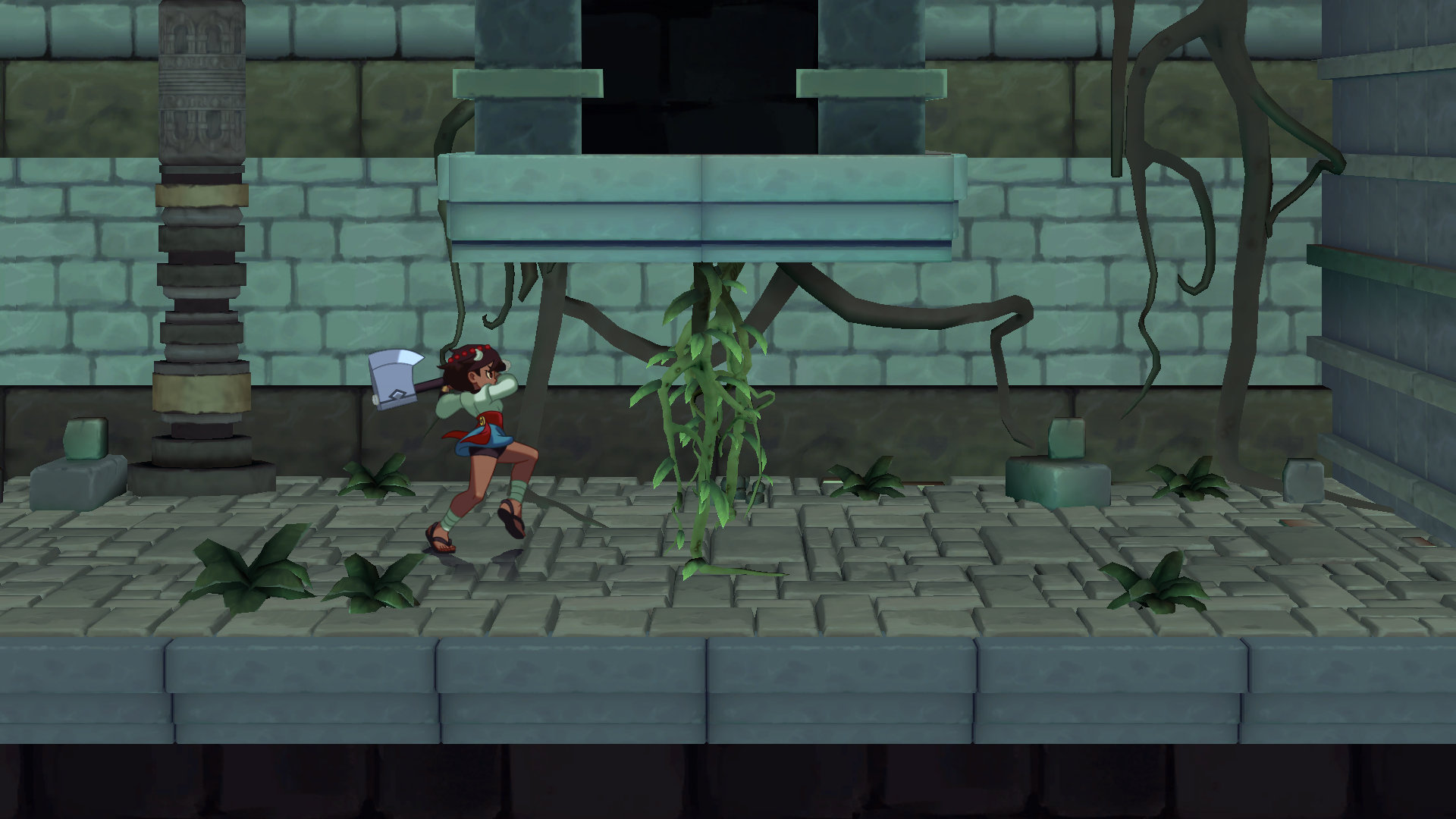 What we will do is get new movements that give some advantage during the exploration thanks to the characters that join the team. At the beginning Ajna fights with fists, but later she gets an axe with which she will cut some barriers that were previously blocked, or it serves to climb verticals – this can be combined with the jumps between walls -, from an archer we will get the possibility of shooting arrows, of another character a spear, etc. 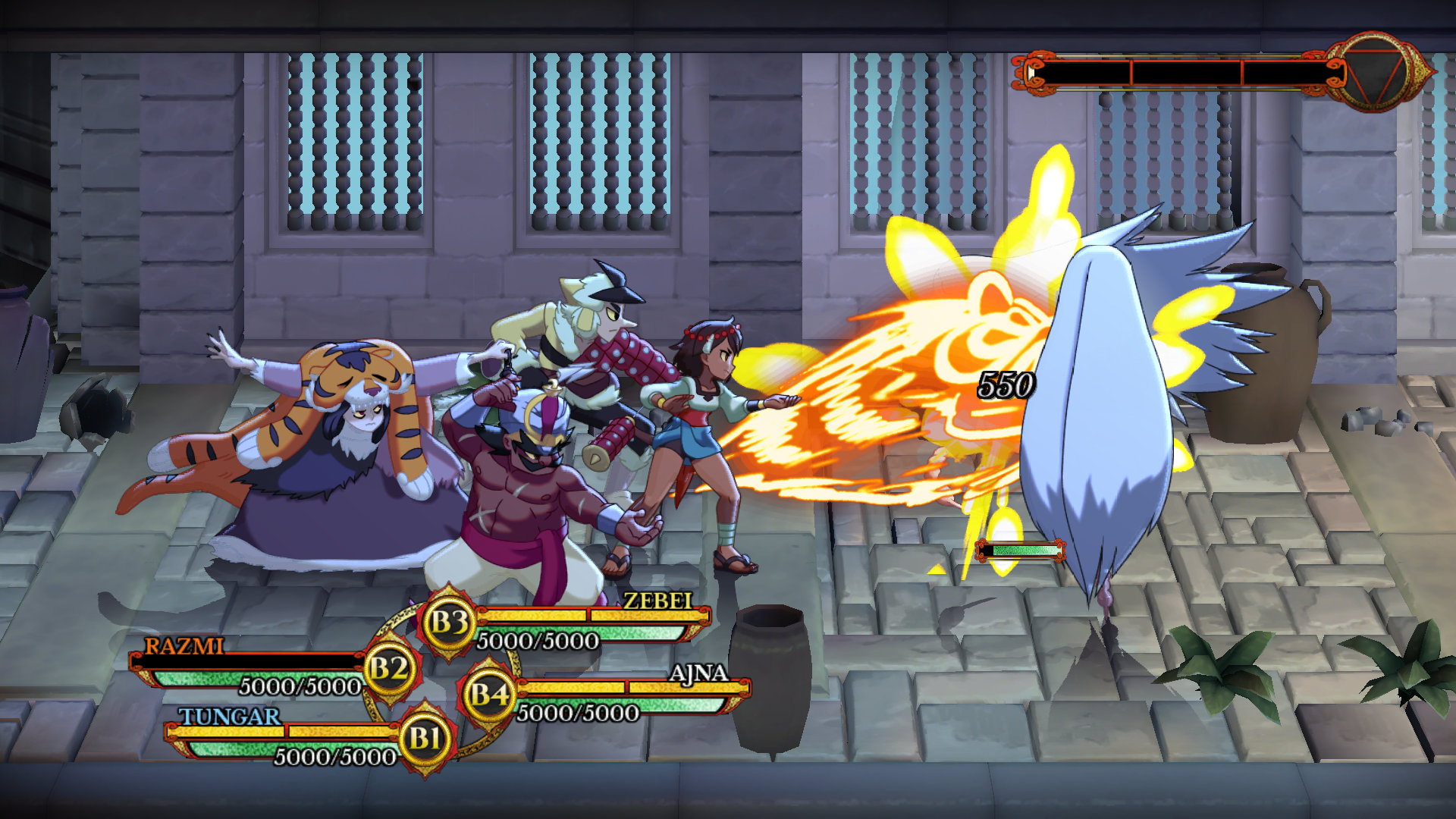 Although the part of platforms is there to give fresh air to the sections to space the struggles and in the first hours, it merely sins, there are also specific sections in which it takes center stage and becomes quite demanding. Not at the level of Guacamelee! , but enough to see difficulty peaks that demand good memorization of jumps, bounces and shots in the air. One of Indivisible’s successes is that it balances the number of confrontations well with exploration; Since we are not talking about a Hollow Knight- style action game, abusing opponents would slow the pace of the game.

Indivisible really marks the differences with its combat system, of which we have already spoken to you in our impressions. On the screen, we have four characters, each associated with a button on the pad, which reloads their attacks by time – and according to the speed each has. If you press the attack button but combined with directions, you make another move or launch that elevates the enemy. 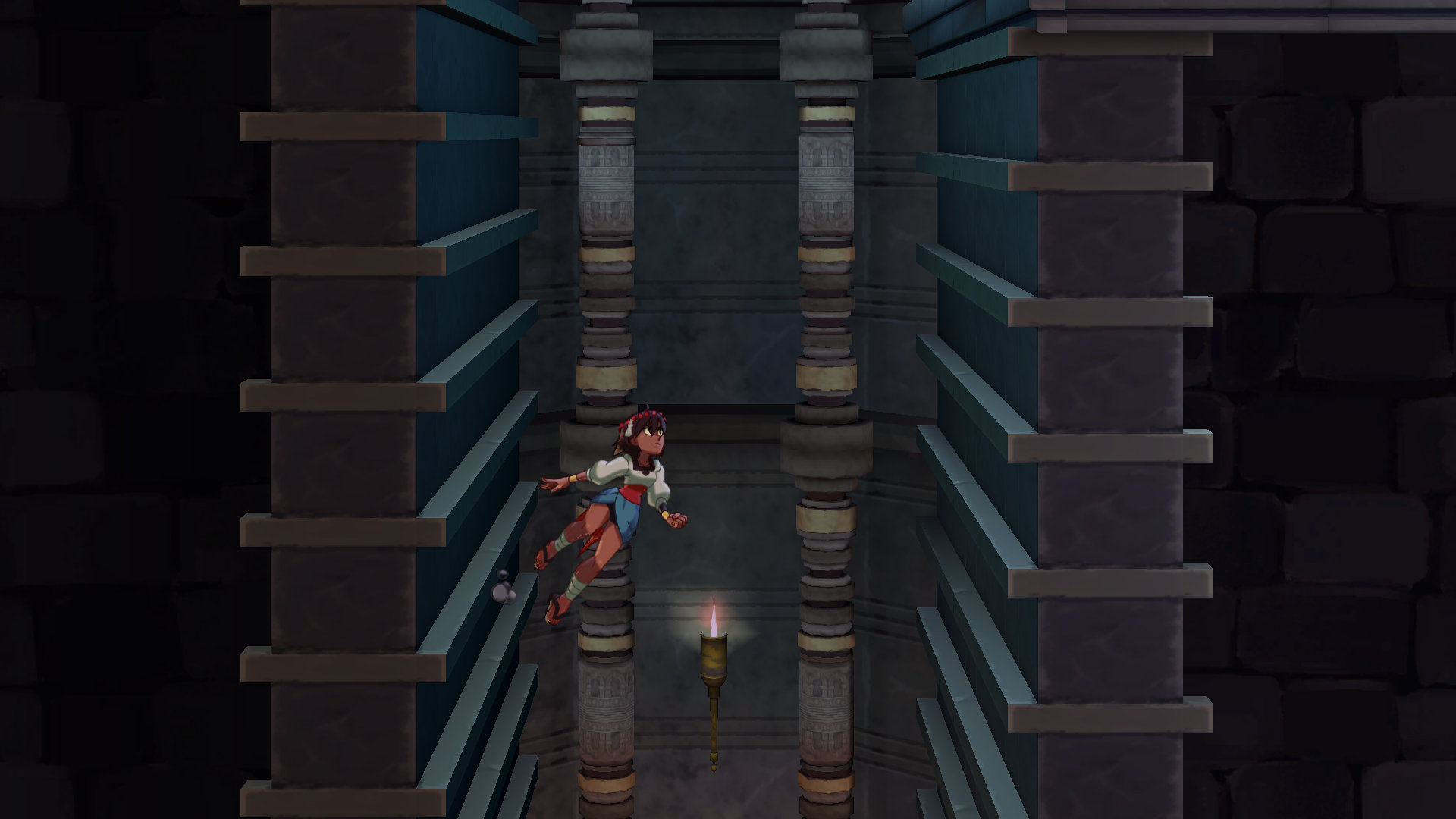 What is all this for? Well, to play colourful combos and crush the opponent before he falls to the ground. As we progress, each character will be able to accumulate more attacks – represented by the buttons on their life bars. To this, we must add a bar that is recharged, and that makes it easy to execute a unique technique of each character – an offensive one, others of health recovery – or invest it in the healing and resuscitation of the group. The defence is also very important, because it rewards to press the button of the character at the moment of receiving the impact, and for the blows of the area – that can damage the whole group – there is another one that protects the four characters. 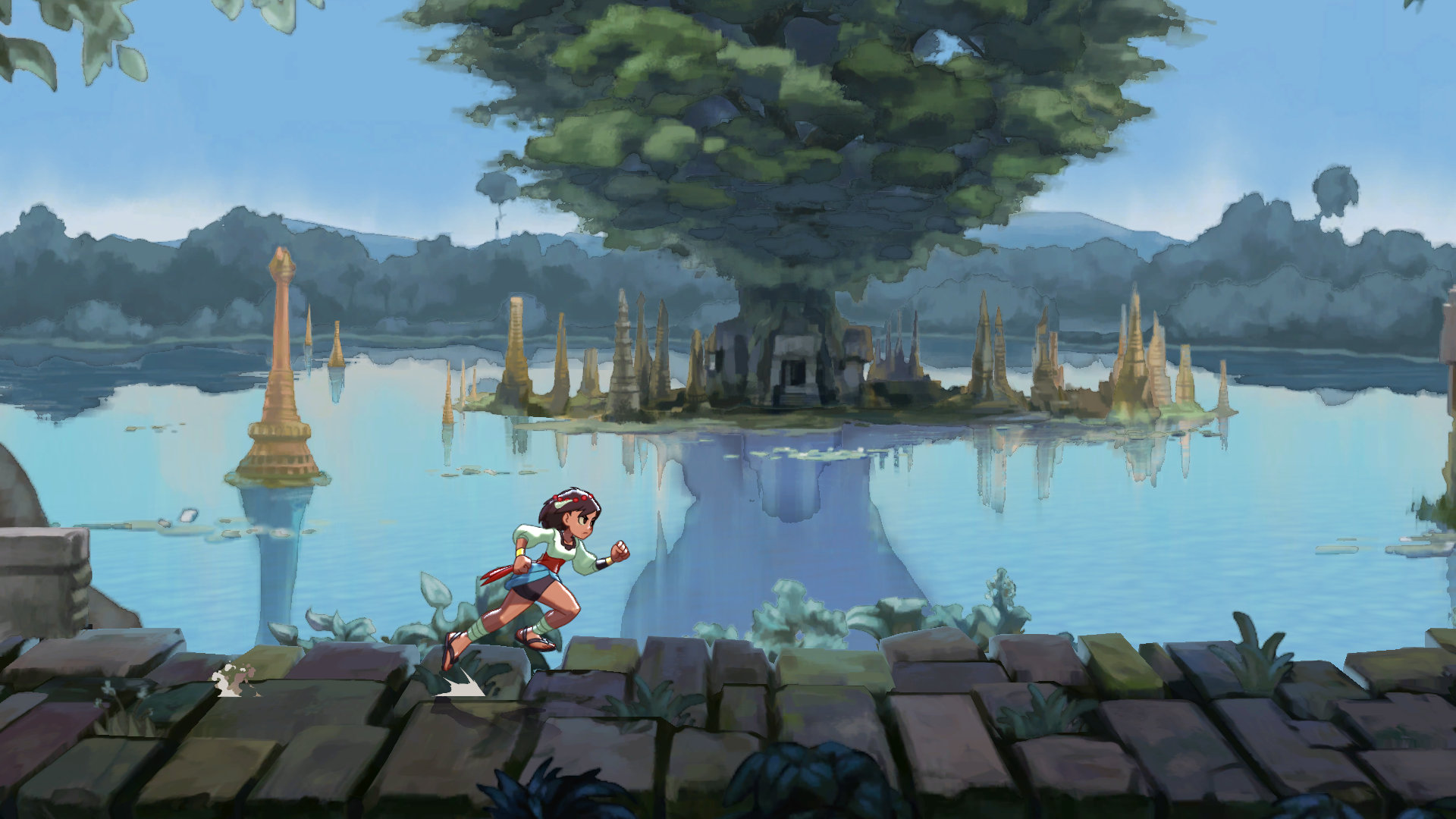 All this may invite some players to crush pointless buttons, but the difference to surviving against the toughest bosses is to plan the combos well and know when to restore health. The enemies are of varied strategy, some airplanes – to which Ajna, for example, does not reach – that must be damaged by a partner to fall, and others have a shield that requires a specific succession of attacks to break the barrier. Who dominates these systems will end the fighting in a short time, and who can not eternalize any duel. Finally, many bosses interrupt their battle, and between the different phases, we have platforms or screens in which to avoid some danger. 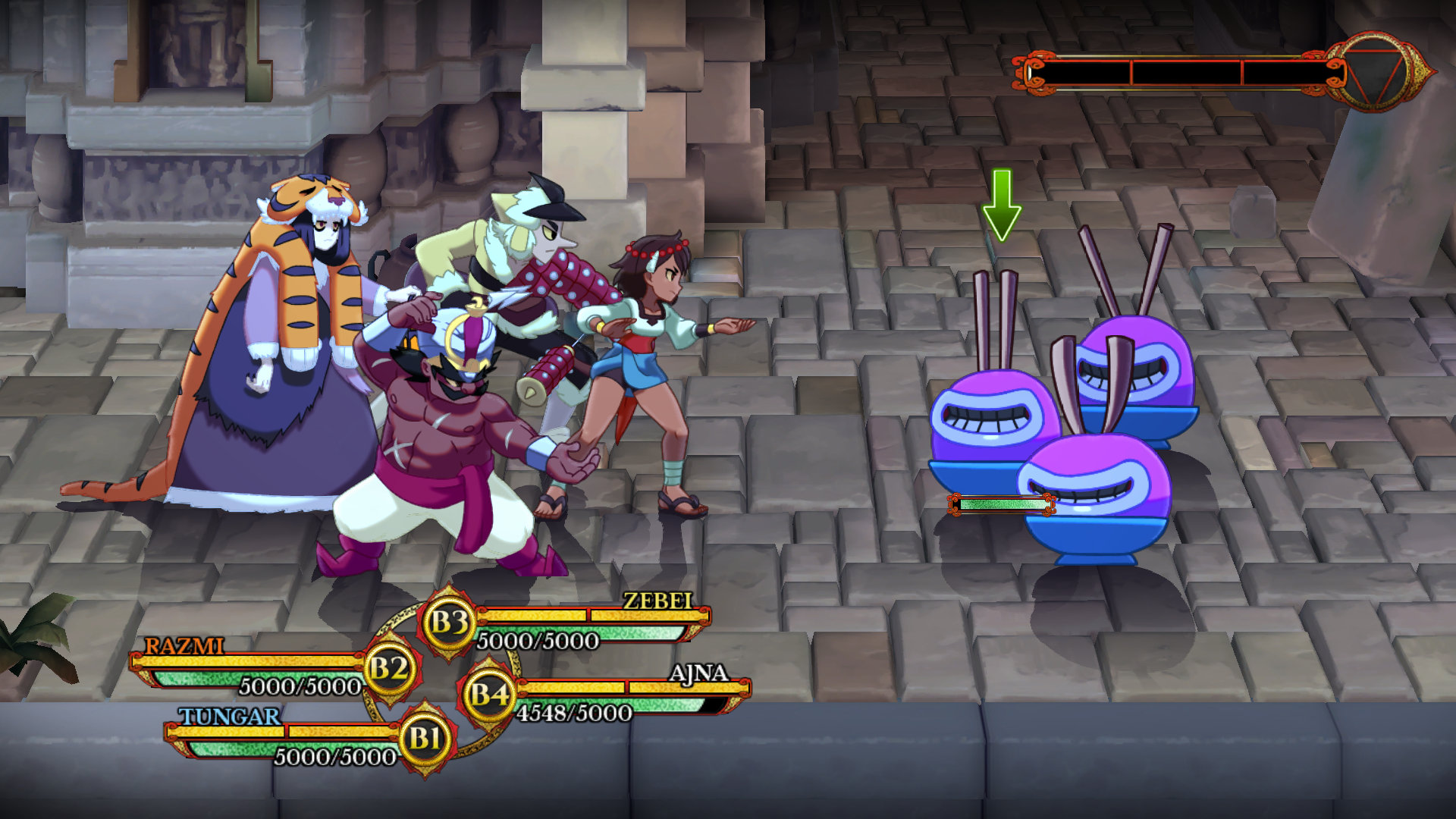 Indivisible battles can be defined by intense. We are sure you will love those who are tired of the slow classic shifts. Of course, they are one of the few role-playing elements of the game, because progress is simplified and we are not going to worry about getting new weapons, skill trees or anything like that. There is a system of levels and with the collectibles – some gems – we can increase the offensive and defensive power. Luckily, the large number of characters and their specializations allow us a lot of flexibility when it comes to creating our team. Still, we prefer to think of Indivisible as an adventure with role-playing rather than an authentic RPG with platforms.

An animated movie on the move

The first thing that amazes us in its graphics section, which combines traditional 2D high-quality animation with 3D scenarios. It is beautiful both in exploration and in fighting and is not afraid to show enemies that occupy half a screen, constant zooms on the protagonist or the battle. We could only blame that some areas are not so inspired – caves, for example, life is missing in the background, but it is practically perfect in its objective of giving an impression of playable anime. Its introduction is created by Studio Trigger and directed by Yoh Yoshinari – Little Witch Academy -. 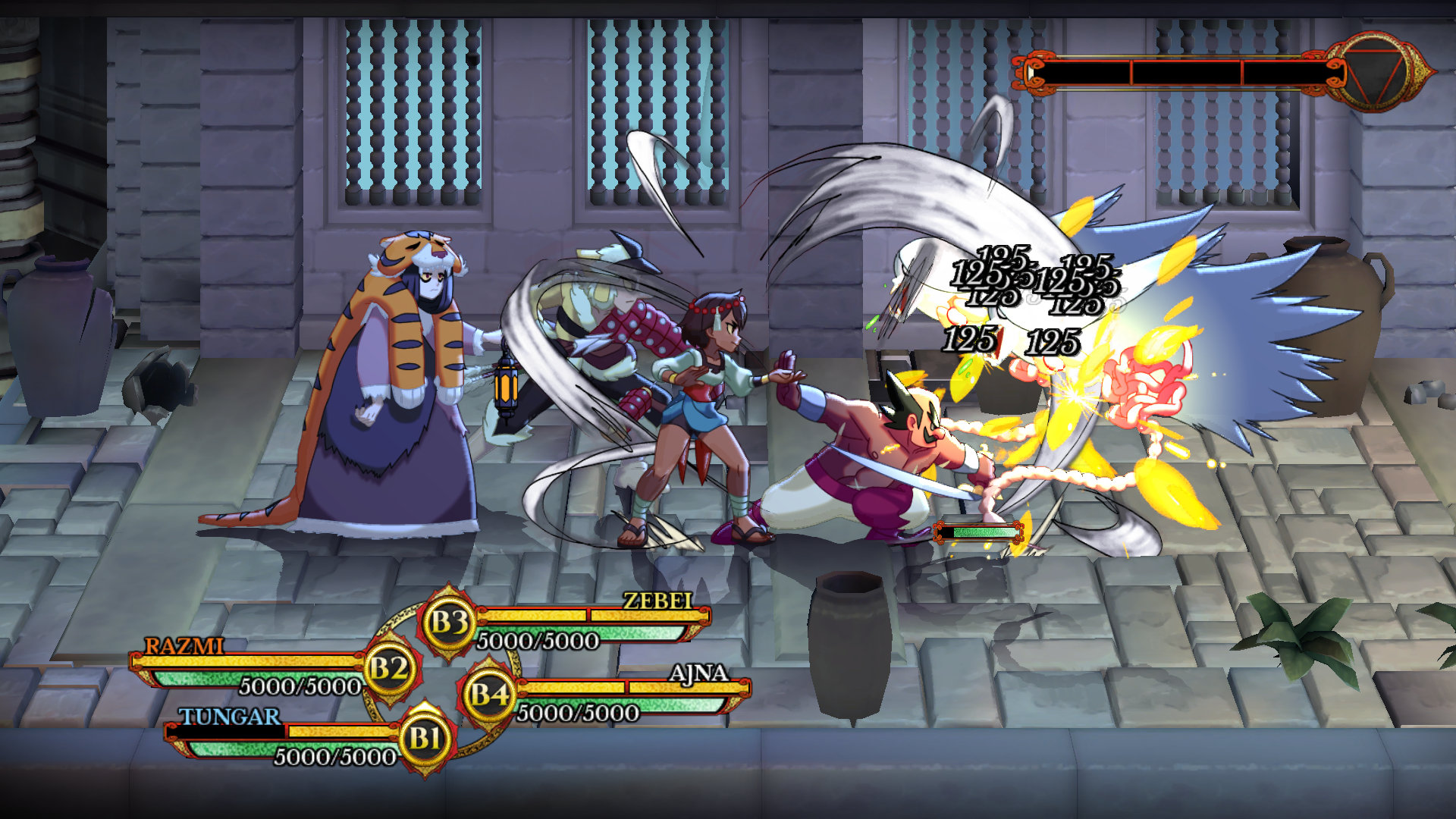 The soundtrack is pretty good as well. Hiroki Kikuta, composer of the Secret of Mana series, Koudelka and many other titles – mainly role-playing -, with cheerful melodies as we used to listen in Atelier Escha & Logy, with a real retro aroma that not many games achieve.

As remarkable as it is Indivisible, it should be emphasized that it does not play in the same league as other purer RPGs, nor is that its purpose, which allows it to eliminate a lot of missions and proposes approximately 20 hours of gameplay. 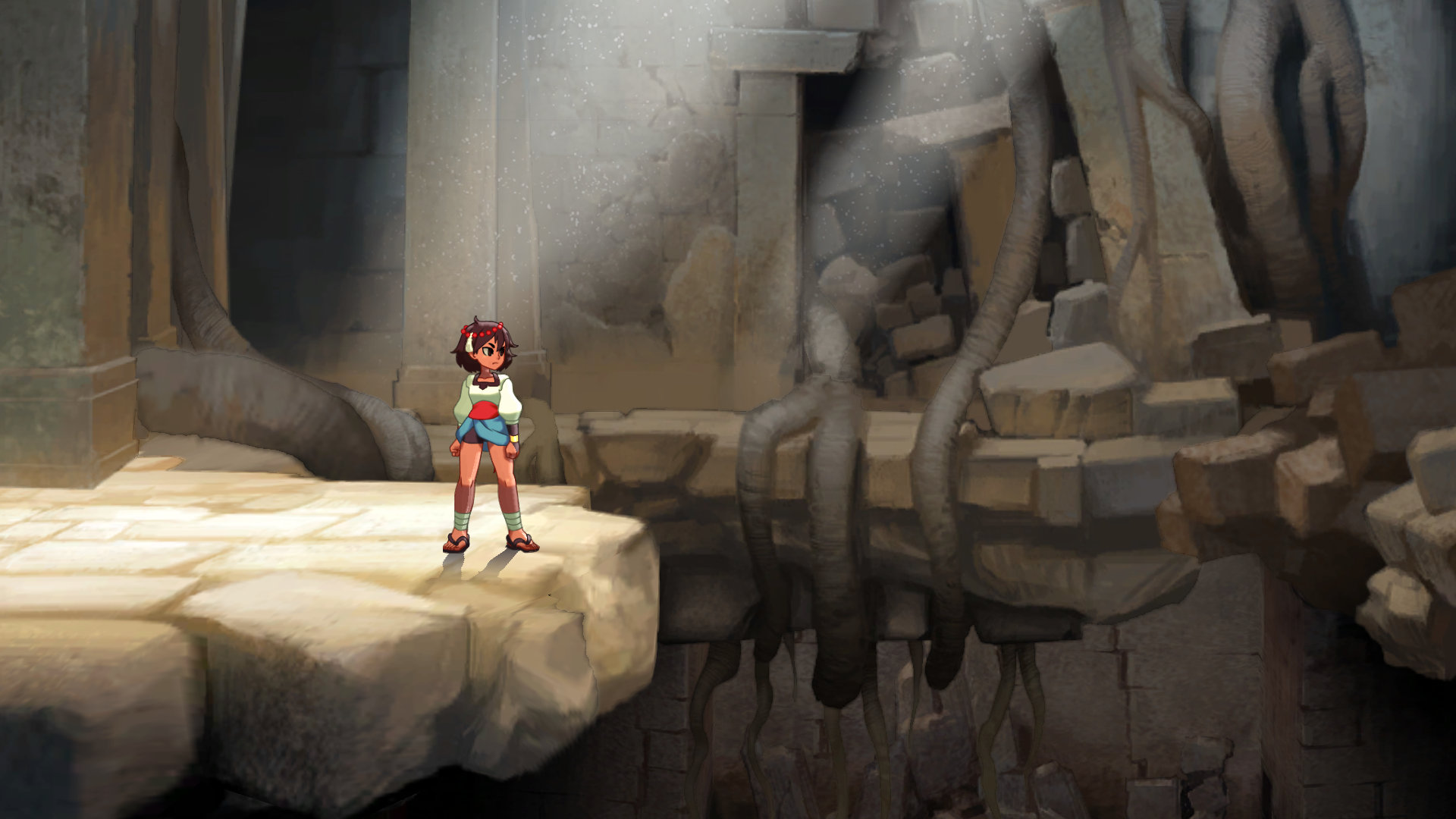 Indivisible uses turn-based combat intelligently – although not wholly original – to complete an artistically spectacular, addictive platform adventure with a fair point of difficulty that does not hesitate to punish the player who does not strive to understand the mechanics. In short, Lab Zero Games manages to demonstrate its versatility and talent in their first RPG platformer. We can’t wait to see their next project.

We have prepared this review with a digital PS4 Pro review code provided by  505 Games.

Ghost of Tsushima will last 30-50 hours including side missions
May 20, 2020
Average User Rating
0
0 votes
Rate
Submit
Your Rating
0