Star-Lord, Gamora, Rocket, Drax and Groot star in a new and fun adventure capable of overcoming their limitations and shortcomings to offer some pure gaming entertainment.

If we have to acknowledge the MCU something, his films have managed to massively popularize some of Marvel’s most unknown heroes, which has led to the renewal of the headers of many comics and the launch of products related to them. Probably the best example of this we have in the Guardians of the Galaxy, who are now preparing to star in their second video game with an ambitious and fun adventure developed by Eidos Montreal that, despite its apparent problems, has made us have a great time in the company of this charismatic group.

In this way, we find a title of the action and linear development for a player in which we will have to put ourselves in the shoes of Star-Lord, the self-proclaimed leader of this diverse and problematic group of heroes. The idea of ​​not controlling the rest of the team members may seem strange to you at first. Still, it is not a decision that has been made lightly since the game’s entire narrative revolves around the idea that we feel like Peter Quill himself. We have to deal with all the headaches he has to deal with daily to keep this extravagant family together.

This means that throughout the entire adventure, we will have to interact with Gamora, Drax, Rocket and Groot constantly, be it to converse with them, give them orders, intervene in their internal disputes and even make decisions knowing that what can please one of them, it might upset another.

This is probably the best-performing part of the full title, thanks to its brilliantly written characters. The Eidos Montreal scriptwriters have beautifully captured the essence of each of these heroes and the relationships they have with each other, thus fostering some excellent and very witty dialogues, a fantastic evolution of all of them and very coherent and convincing reactions.

This means that they will be very unpredictable and that at any moment someone can get angry and refuse to do what we ask, that a discussion arises between some members when deciding how to solve a problem or that someone suddenly leaves our company because he has other plans that he has not wanted to communicate to us. 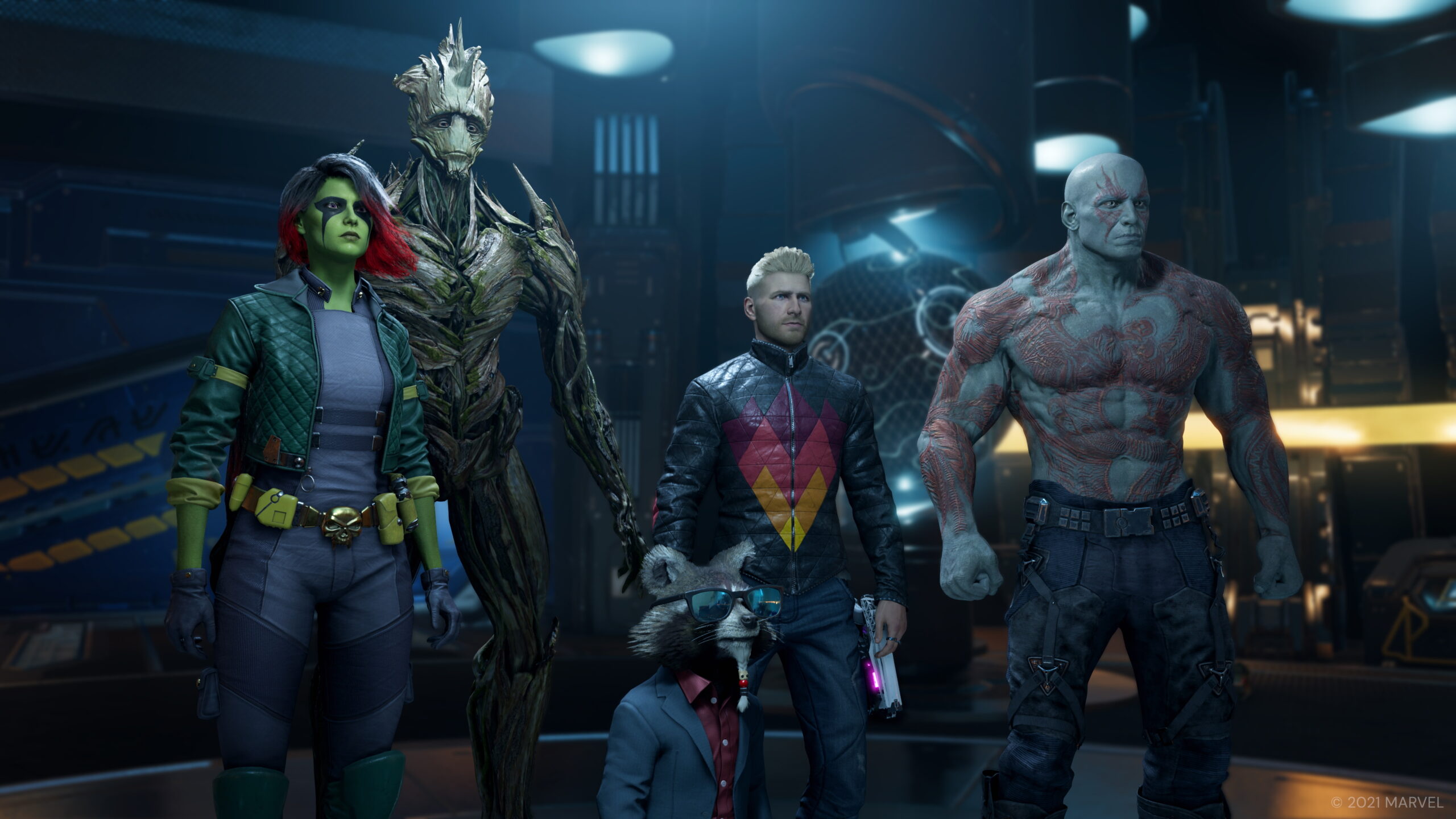 That constant interaction with them both when fighting, exploring or simply relaxing gives the group a lot of credibility and generates a feeling of belonging like no other title based on a Marvel license has achieved before. Rare is when the characters stop talking since they are always commenting on everything they see, taunting each other, sharing their thoughts and exposing their opinions, dialogues in which we can frequently intervene, choosing our responses in real-time while we play.

Of course, you can also expect a lot of humour, an element present in the game from start to finish, and that has made us laugh more than once. In addition, we liked that the characters are not as cartoonish as in the films since they have very elaborate backgrounds that make them have much more depth. For example, Drax is not only a comic resource, but he also maintains that touch of strategist that he has in the comics; he reflects on delicate issues. His past haunts him, which leads him to question many things about himself and others. that surround him. This is something applicable to all the protagonists, which has allowed the narration to have included sequences and dialogues with a very high dramatic load between joke and joke; without that reason, they clash with the general tone of the story.

Speaking of history, the script as such is quite simple. It does not depart from the usual Marvel lines, so we must save the galaxy from a powerful evil that threatens to consume everything that Rocket and Star-Lord freed because of a bet during one of his missions. In the end, this premise is still an excuse to take us to live lots of adventures on planets and places of the most varied and the actual weight of the narrative falls on its characters and the evolution of their relationships, the most worked aspect of all the title and by far.

Adventure through the galaxy

Suppose we have dedicated so much text to tell you about its narrative. In that case, it is for the simple fact that it is, by far, the essential part of the game since its purely playable development is limited to amusing and entertaining without great fanfare. As we said at the beginning, we are facing an adventure for a player with a linear structure in which the story will guide each one of our steps. That is to say, there are no side missions here or explorable maps that we can return to, but we will continually advance through some very “corridor” scenarios in which getting lost is practically impossible. At the same time, we look for secrets in the form of costumes, resources and collectibles, and we chat with our colleagues, we solve the odd puzzle, make decisions, do some “platform,” and fight anyone who dares stand in our way. 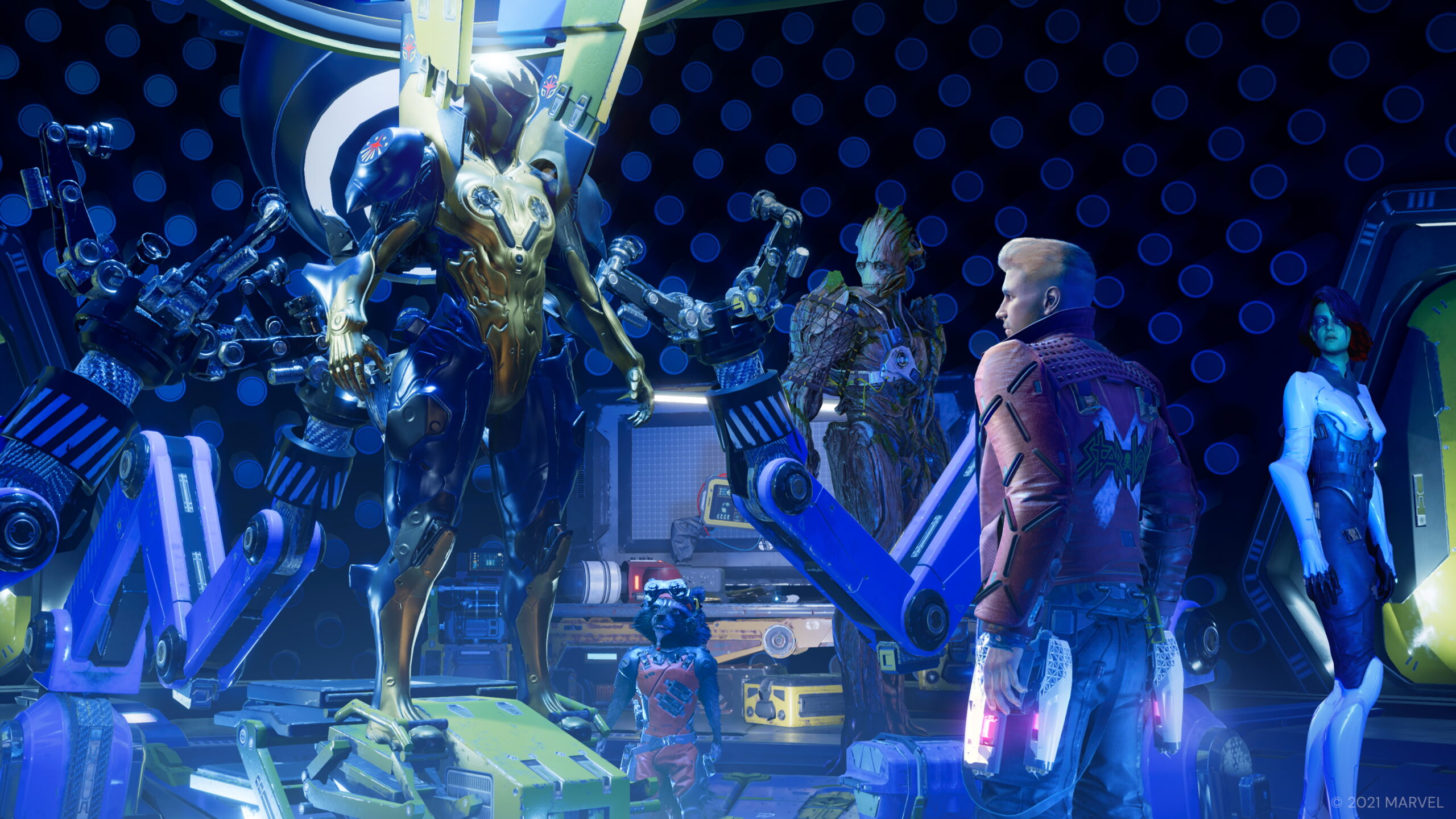 The script always has the upper hand, and if the story needs a whole chapter in which we are not going to pull the trigger, the title respects it. This means that there are many moments in which we will only dedicate ourselves to moving forward without doing much beyond listening to the characters speak. At the same time, we intervene in the conversations and give the occasional order for Groot to create a bridge, Drax to break a wall, Rocket manipulates a control panel, or Gamora propels us to a high position that we would not reach otherwise.

The puzzles, in general, are straightforward and not very inspired, and the “platform” is also quite primary, so that, in the end, the most exciting part of its gameplay is in the fighting. In them, we will dedicate ourselves, above all, to shooting and dodging. At the same time, we give orders to our allies to use their abilities (which take a while to recharge so that we can put them into practice again). However, various elements make these battles are very entertaining, such as the inclusion of an active reload system, the addition of a stunning bar to knock out our rivals if we fill it to the maximum or the possibility of changing the type of elemental ammunition that we use to exploit the vulnerabilities of the enemies. 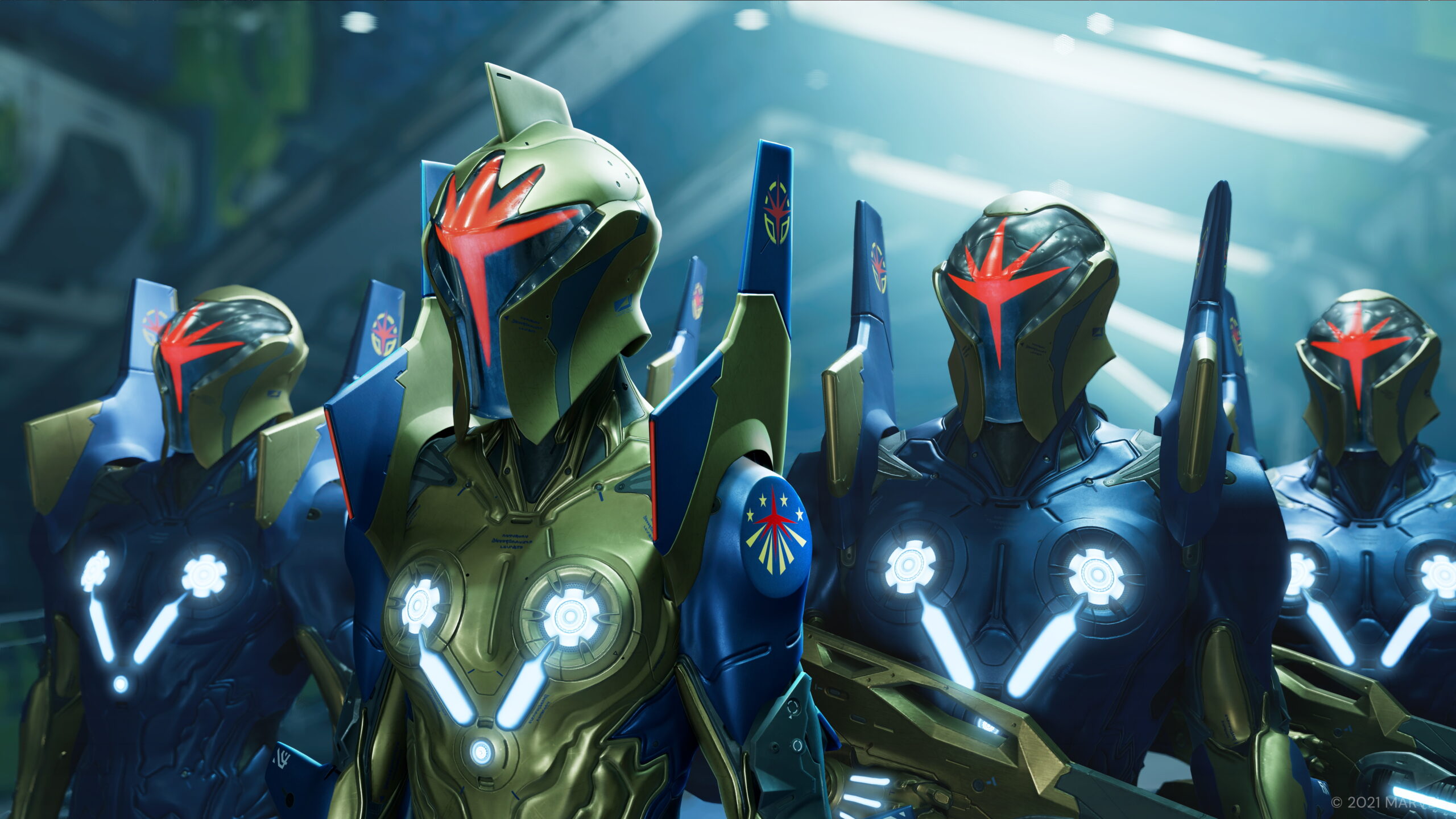 In addition, when we fill a special meter based on actions, we can gather our team to encourage them and make pineapple, a maneuver that will heal and empower us a lot for a while. At this point, we will become a meat grinder. . Of course, for this to work, we will have to choose the appropriate response according to the situation, although what we have to say is always quite obvious.

In the end, fighting is fun because things do not stop happening on the screen because of the variety of enemies and how frantic everything is when we cannot stay still for a second. However, the truth is that we will almost always dedicate ourselves to doing the same In most of the confrontations, something that ends up resulting in the last third in which they do not stop bombarding us with filler fights that have made us quite heavy because of how little they evolve and how numerous they are. Sadly, the bosses didn’t seem to measure up to us either, culminating in one of the most wasted and disappointing final battles we’ve remembered in ages. 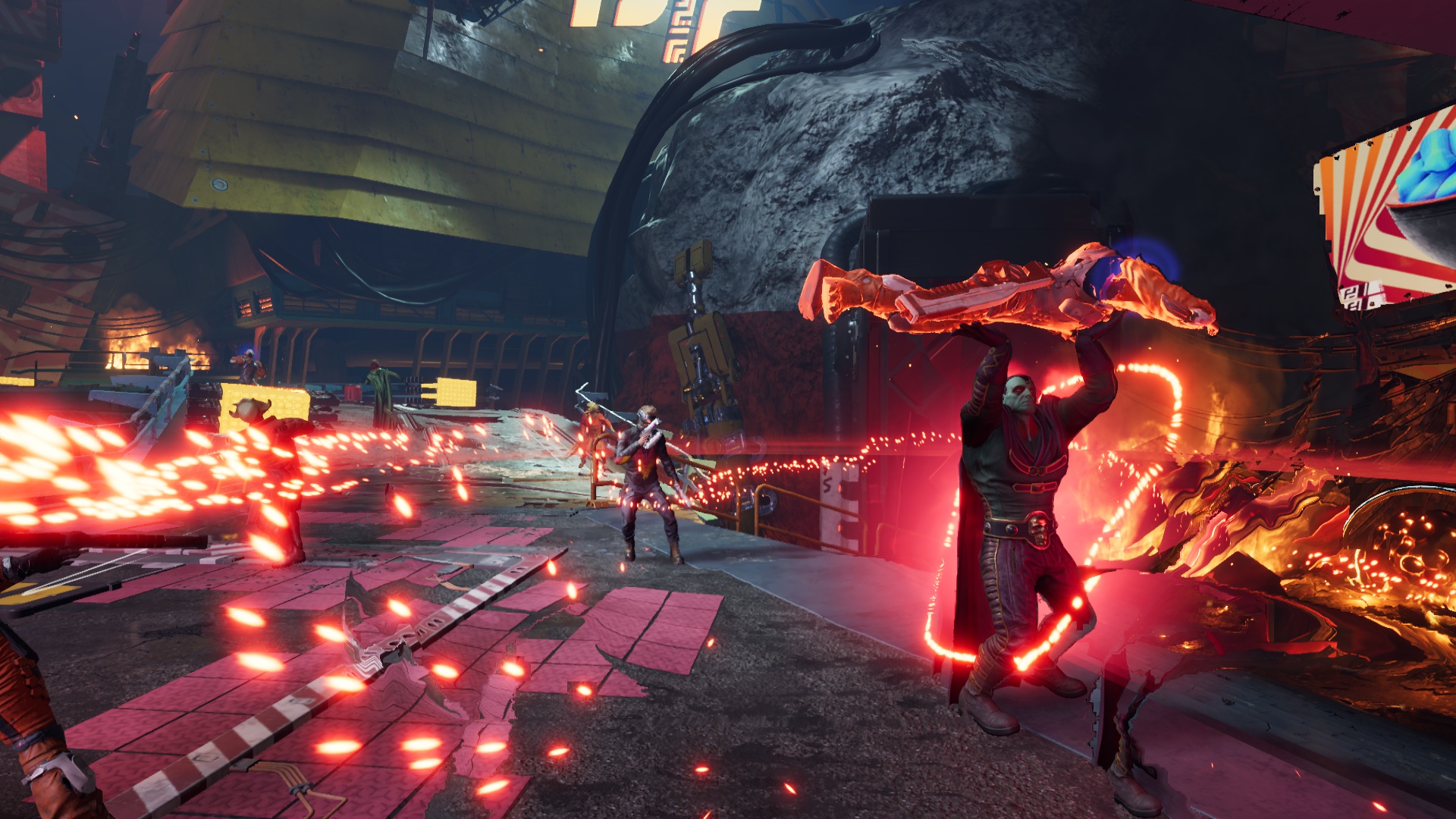 Regarding its duration, the figure is around 12 and 15 hours, which can vary depending on how much or how little you stop to explore and talk with your companions. Here we have to warn you that the decisions we make do not affect the story as such, and it always reaches the same points regardless of what we choose, so they only slightly alter how certain events unfold so that they do not hope they give you too many reasons to replay it. 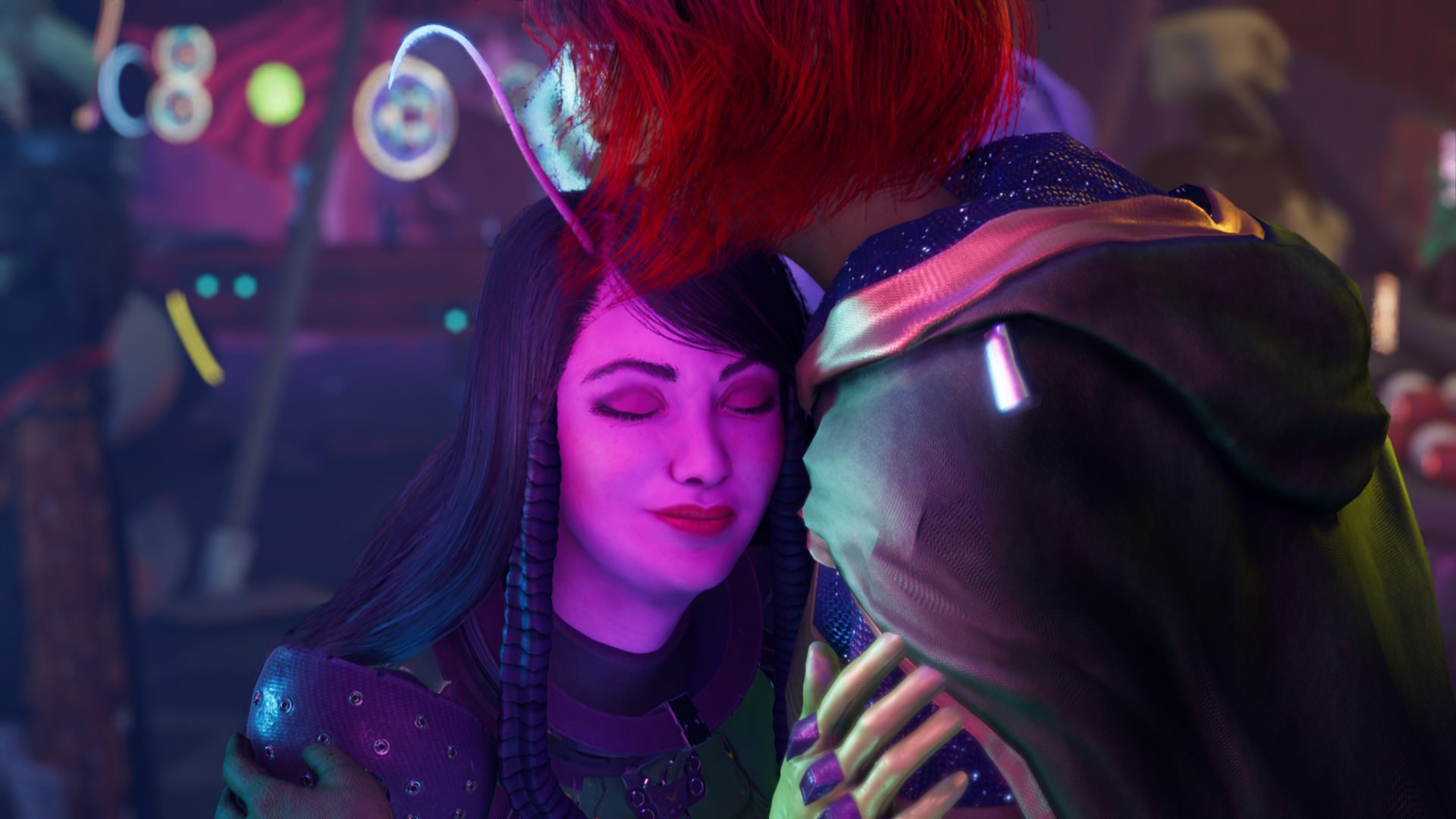 A beautiful and troublesome universe

We are facing a beautiful title at the graphic level, mainly due to its excellent art direction, capable of giving life to strange and overwhelming worlds, settings full of details and characters with fascinating designs. The modelling also complies, and we liked the design of most of the protagonists and main characters, not to mention its elaborate effects, quality textures or how well the lighting is used.

However, details such as animations or facial expressions have expansive room for improvement, although our biggest drawback lies in the vast amount of programming errors that we have found. Most are related to the interface, graphics, audio or the detection of solid elements (we have crossed the ground and fallen into the void on many occasions) and are usually solved by simply reloading the last control point. However, it is still highly annoying and breaks the dive.

Square Enix they have promised us that developers will solve many with their launch patch. Still, since we have not been able to access it, we can only tell you about our experience with the version they have provided us, which has not been particularly satisfactory and has made us doubt that a single update can solve all this mess.

Where we are not going to put any hits is in its musical section, since the soundtrack is and perfectly perfect, with a mixture of epic Marvel-style compositions and licensed songs from the 80s, each more mythical and iconic where there is room for artists of the stature of Iron Maiden, Kiss or Mötley Crüe. A marvel for which, in addition, a complete album of a fictional rock group has been created.

The effects are also quite sound; the lip-syncing during video footage leaves something to be desired.

Marvel’s Guardians of the Galaxy is a game with some undeniable shortcomings, but that manages to overcome them to make us spend some great and fun hours in the company of this charismatic group of heroes. Yes, it may be that it is limited to comply in the playable and does not manage to excel in anything. Still, its narrative, its dialogues, its characters, its sense of humour, the attention to detail, the enormous amount of winks for the fans and our central role as leaders of this dysfunctional family have been enough to support the total weight of the adventure and leave us more than satisfied. Could it have been better? Without a doubt, but if you like the license, you will do well to give it a try.

We prepared this review with a digital review key for the PS5 version of the title provided by Square Enix.