PayDay 2 arrives to Nintendo Switch with hardly adding any new features and outdated visuals, but with the great freedom of being able to play anywhere.

There is no doubt that Switch has become one of the most attractive current gen console for developers. Its great success is enjoyed among players, important to remember its portable capabilities, gives companies reason to have the perfect excuse to re-launch many of their most acclaimed titles and give them a new opportunity to increase their sales and reach to new audiences.


As a result, in addition to exclusive games and multiplatform, we are witnessing a time when many games launched in the past and in the current generation are disembarking in Switch with little news, but with the claim to be able to play both in the TV as in Portable Mode.

Under this same premise comes PayDay 2, a title that reaches its first five years this year and which, to this day, continues to receive the support from Starbreeze with constant updates of content that has kept it alive and with an active community continues enjoying the varied robberies.

Before continuing, we want to make clear that this time we are facing the same game that we could enjoy on the other platforms , so we recommend that you take a look at the review that we devote in time to deepen their gameplay, pros, and cons, because here we will focus almost exclusively on the features of this new version for the successful Nintendo console. 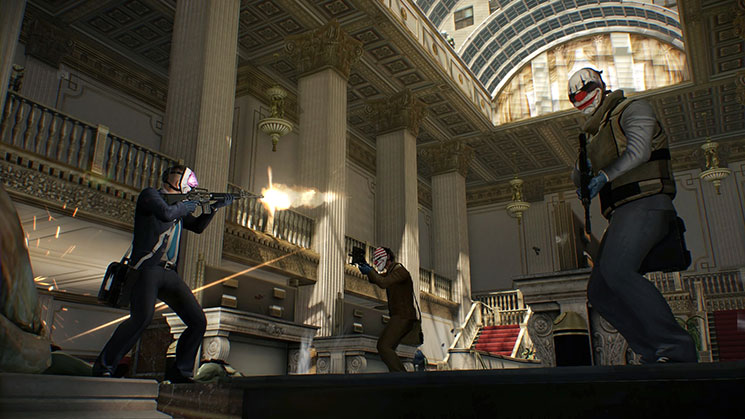 In case if you do not know anything about PayDay 2, this is a first-person action game in which we embody a group of professional criminals specialized in carrying out major blows and robberies to enrich themselves. It is a title without a history in which the different missions appear randomly in the general map, which in turn can have different difficulty modifiers (or not).

As we complete robberies, we will raise the level (which will allow us to access new equipment and invest skill points in a variety of improvement trees) and receive money to invest in better weapons, all in order to make each time stronger and more skilled to have options to overcome the most complicated blows in their most advanced difficulties.

If there is something that characterizes this game, it is your total commitment to the cooperative. We can join forces with up to three more players to hold robberies together, and the phase design itself is fully designed so that collaboration with our teammates is practically essential. 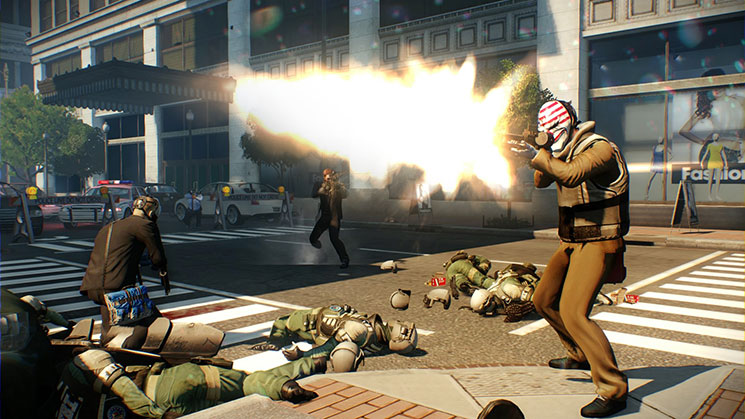 Once the action begins, it does not stop until the end of the mission, so weird will be the moment in which the security forces do not harass us from all directions, which makes it very important that we cover each other, not to mention the objectives that we have to fulfill, many of which imply that while some do one thing, others have to do another.

It is still a very funny, challenging and satisfying title if we have three friends to coordinate with, although it loses whole if we play alone with the AI, since it will be up to us to meet all the objectives, which slows down the realization of the robberies and considerably increases the levels of frustration, so we recommend that you keep this in mind before you go for it.

Regarding the Switch version, it should be noted that this only includes the contents of the original game until the “Most Wanted” update, launched on PC last June, so we have an outdated product for eight months. , as it is not even on par with the editions of PS4 and Xbox One, which have all the contents until the patch “Master Plan”, released at the end of last year. 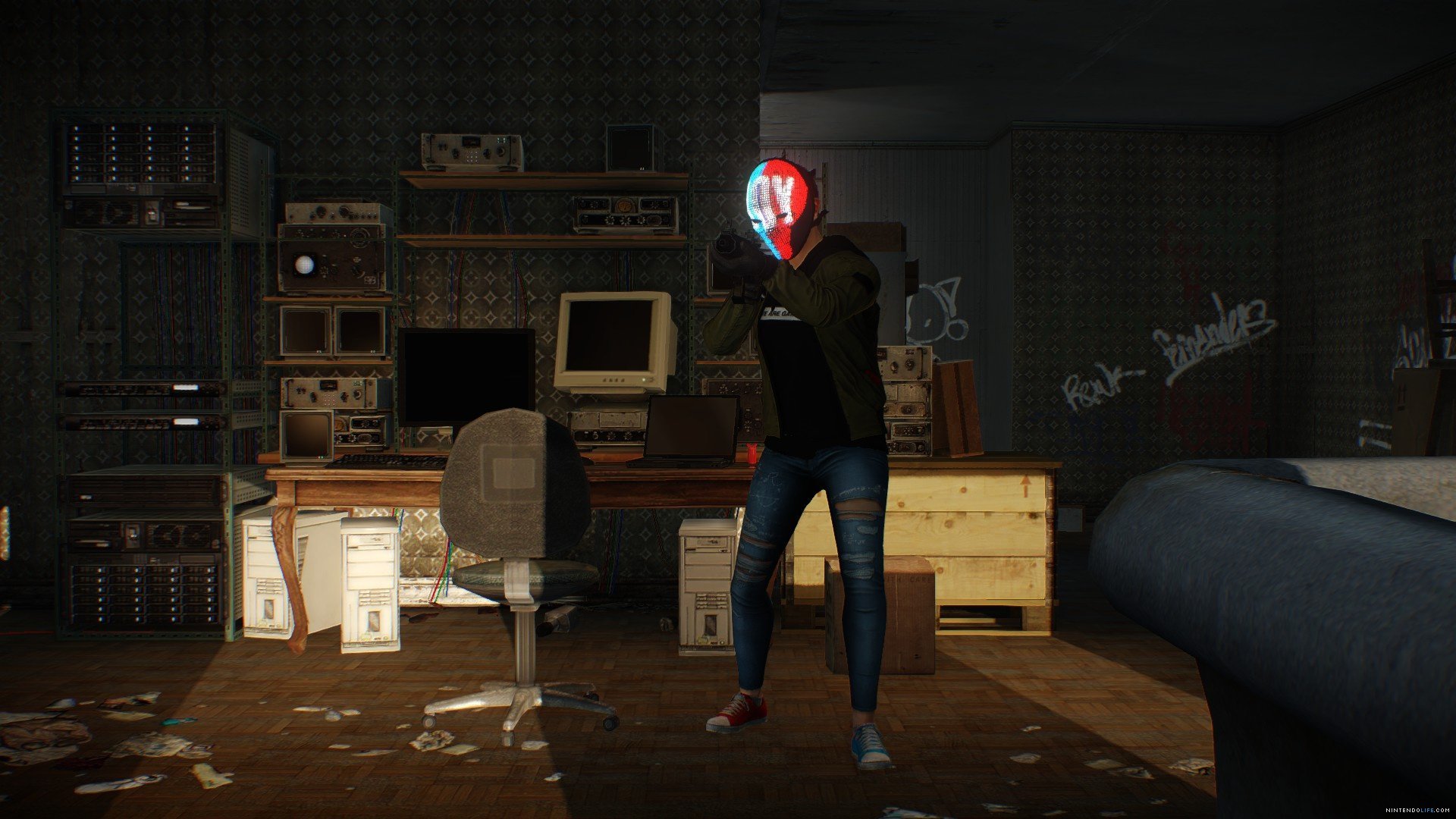 Honestly, we do not think the best of the ideas to launch in these conditions a product with almost five years already behind them, especially after all the controversies surrounding the game in its versions for new generation consoles, with unsolved problems and updates that it took more than a year to arrive.

Obviously, this implies that the title lacks certain content (missions, weapons, accessories) and improvements, both visual and playable, compared to other platforms. As expected, Starbreeze has already issued a statement assuring that the title will receive updates during the coming months, but the pace of releases is uncertain and we do not know how long it will take to match the game, at least, with the other versions of consoles, What we can only trust is that the company has learned from its mistakes with the management of PS4 and Xbox One editions so that the same thing will not happen again. 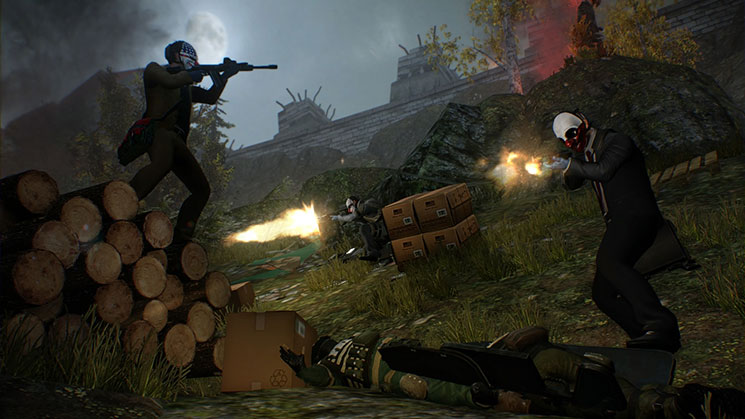 Of course, this version includes a temporarily exclusive character that has not yet been released in the others, Joy, who has his own mask and weapons. Not that it is anything really relevant or that it compensates what was said before, but it is something that must be pointed out. 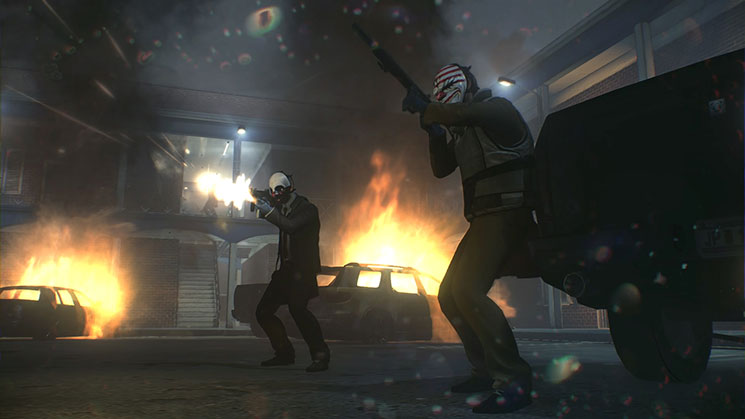 Among other exclusivities of the new Nintendo console, it should be noted that it allows cooperative playing on the local network (ie, each player with its own Switch and its copy of the game), and not only through the Internet, a detail that always It is appreciated for those who usually stay with their friends to play.

We also took advantage of the occasion to take advantage of the HD vibration of the Joy-Con and immerse ourselves more in the experience, and to allow touch controls in the menus in order to facilitate our navigation through them when we play in Portable Mode. And yes, the possibility of playing PayDay 2 anywhere is the most attractive exclusive feature of this version is handheld vs tv mode, which has been taken care of so that it works without problems on the console screen itself.

Going into the technical plane, say that in the TV mode reaches 1080p resolution, while the handheld stays at 720p. In both cases, it moves to 30 frames per second that, in general, are usually stable, although at the most demanding times we have detected some minimal lag that does not affect the whole too much because they were very few.

Despite this, we remind you that we are facing a game with a few years already behind it, so that the visual section has been somewhat obsolete, with textures, modeling, effects and animations very improvable and that are limited only to meet the minimum requirement. Note that it looks very similar to laptop and desktop, so you will not have problems to enjoy it in the way you want.

The sound keeps the same soundtrack full of dubstep to animate and acclimate the robberies correctly, the effects are merely functional (the noise of guns when firing leaves much to be desired) and the narrative, also conforms to comply and does not aspire to anything else. 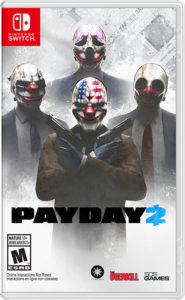 PayDay 2 is still a very fun and recommended game to play with friends, whether on Switch, PC, PS4 or Xbox One, but that does not mean that this new version for the Nintendo console has left us slightly disappointed by the management has made its contents. Yes, it has the advantage of being able to play on a laptop, but in return it comes with less content than the rest of the platforms, forcing us to wait an indefinite time in order to be on a par with the rest of users.

Our recommendation, would be to wait for a bit to see their pace of updates, but if you have never played, you have three friends more interested in it and you give more importance to its portable possibilities than the fact of having a currently outdated version, Here you will find a title with lots of action and challenging content to keep you entertained for months .

We have made this review with a review code provided by Starbreeze.