Afthe The Climb, Crytek once again brings another virtual reality title, although this time in PlayStation VR and with a concept of game closer to the adventure, that part of an attractive starting point. Will you be the Robinson Crusoe of the 21st century?

PlayStation VR receives this week another exclusive game, Robinson: The Journey , a space adventure that adapts, freely and in its way, some of the ideas seen in “Robinson Crusoe”, the novel by Daniel Defoe. And here we are a “galactic adventure”, playing a character that needs  to survive after his mother ship crashes and his evacuation capsule crashes on the inhospitable planet Tyson III, in where  dinosaurs continue to camp at their leisure.

And as the original “Robinson”, we also have our own “Friday”, which here is a HIGS, a small and talkative floating computer that accompanies us at all times and, besides giving us chatter, gives us advice, information and even is A key piece in overcoming some puzzles in which we must redistribute the energy in convoluted diagrams.


The adventure does not just begin to impact the capsule, we do not lead the first steps of survival, but after seeing some facts in the form of video, such as adopting a T-Rex baby as a pet (we can give orders Simple or even play hide-and-seek with her), we take control when Robinson has been on the planet for a year, with an established base camp, with protective gates, an orchard …

Our goal, while awaiting the signal of a rescue team, is to go beyond our safe area and explore new areas of Tyson III, looking for five HIGS capsules to provide more data on what happened in the nurse. A trip that will take us through areas like a dense jungle, a deadly bog marsh or the remains of our own nurse, the Emerald.

In all these areas we will have to make good use of our “multi-tool”, a kind of wand that reminds us of a Move command that allows us to perform actions like lifting and manipulating objects (for example, creating an improvised bridge with scrap) or Scan live creatures to create a database about the local fauna.

This scan is a mini game in itself: once the creature is fixed, we must control a pointer by moving the head, to pass through all the green points that are in his body, while avoiding the red ones. Doing this correctly adds a new entry in our database, and allows us to admire a 3D model of the creature in question. 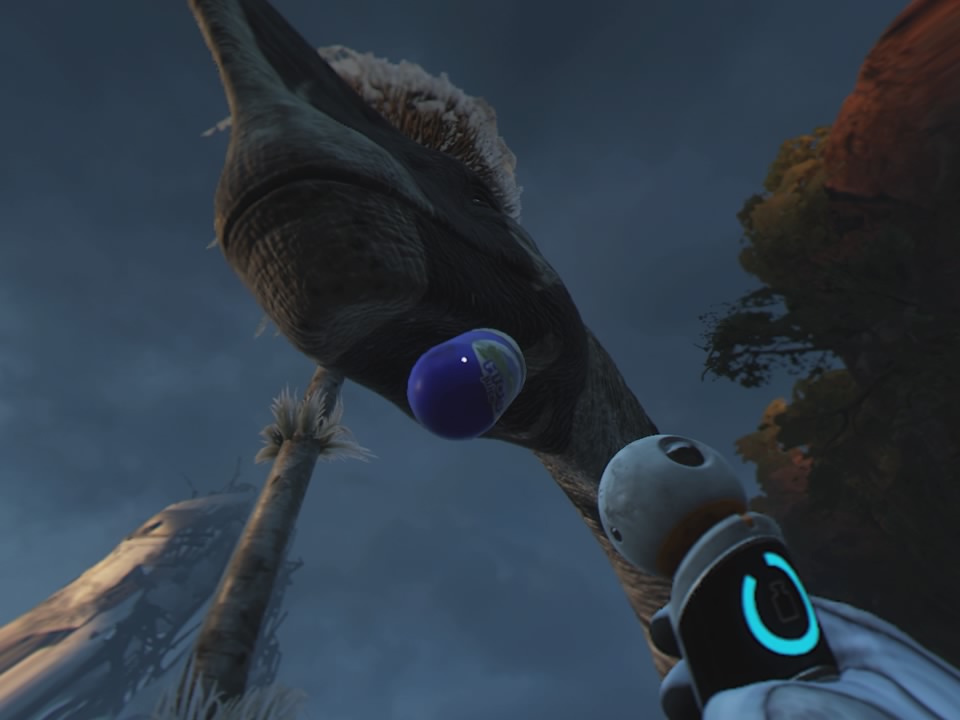 Advancing this world is done as in other 3D adventures: with the left stick we walk and with the right we control the camera. There are several modes of control of the camera, from a “fluid” mode, which allows us to continuously rotate the camera to others that go “jumps” 30 by 30 degrees. In addition, by turning the head we can also rectify the direction in which we advance.

We have tried all the modes, and we have not had the so-called “motion sickness” or bad body for the movement, maybe because the movement is always smooth and there is no option to run. In a sense, the progress is slow, but not slow to despair. But everything is much more agile when the other great mechanics of the game: climbing.

Crytek, the creators of Robinson , launched in mid-year The Climb , a climbing game for Oculus Rift, from which they borrow their game system. Thus, in many walls of the environment we will see projections and some distinctive habitat  that allow us to support us (as well as wines, cables …). We just have to get closer to these objects to see our virtual hands and start climbing. 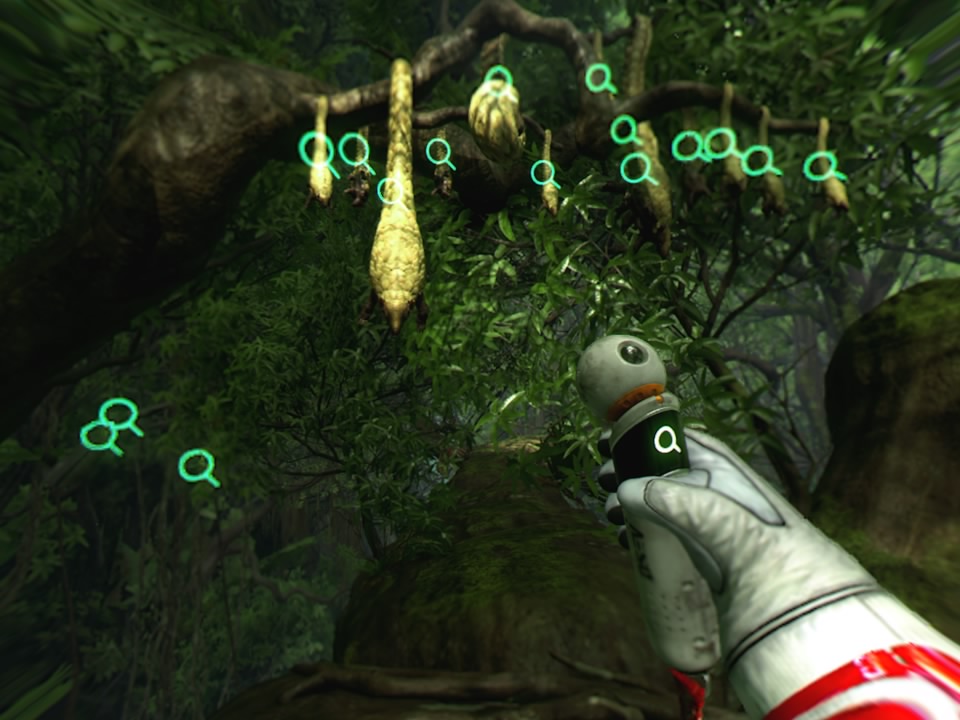 This mechanic is very simple, since it is enough to look with the look the protrusions to which we want to climb and to press L2 and R2 so that our left hand or right grips to the protrusion. If we do not arrive, we can stretch the neck a little to reach it … A mechanic that alternates with zip lines, lianas in the purest Tarzan style and some tense situations, such as avoiding the attack of a pterodactyl while we overcome an abyss with the help of some  wine ropes.

And it is just these moments, in which we interact with the dinosaurs  in one way or another, the most intense of Robinson. We must feed a dinosaur, pass between the velociraptors without being seen and even see the faces with a T-Rex (from the beginning of the game you know that this situation, sooner or later, will arrive) . These are moments where tension and emotion soar, but neither are many nor seek to inflict a heart attack on the player.

As an example, the areas of stealth in which we must pass between velociraptores: if they detect us, they will start running towards us … but before we get to “eat”, we will see a fade to black that saves us the anguish and bad time . Unfortunately, as we say, there are not too many moments that are where the game really shines. 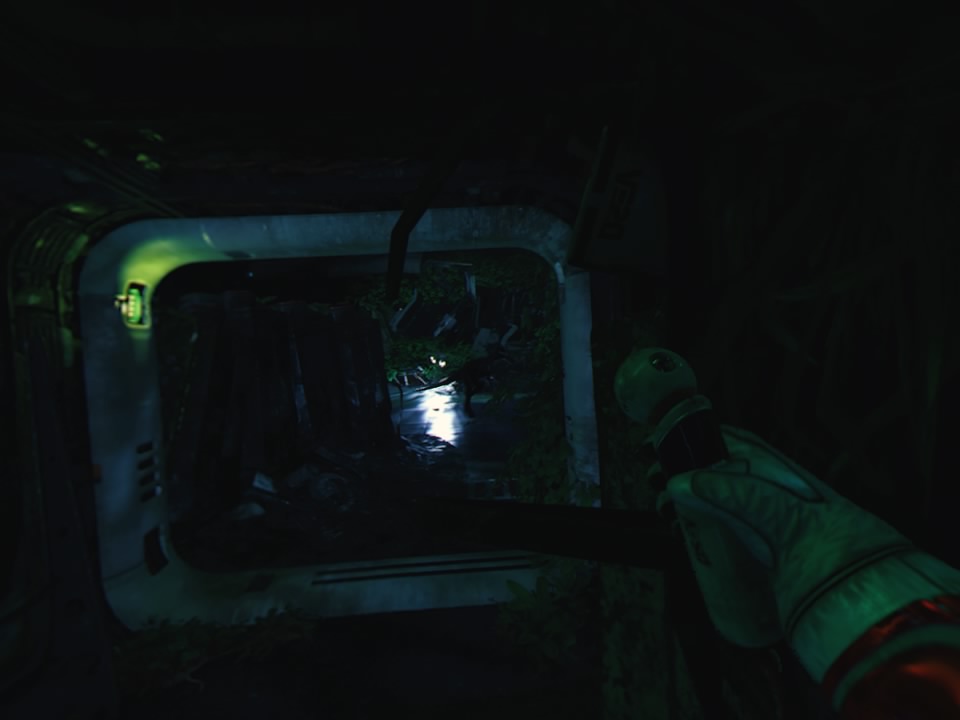 And we say that they do not abound because the game lasts rather little. Without too much haste you will be able to finish the adventure in just 4-6 hours, double if you will carry out all the secondary tasks (at the end of the adventure, we can continue exploring the world with freedom to complete them). A world that is not too large: there are only 7 zones and are neither too big nor too wide, limiting us to feel the sensation of exploring an immense planet.

Technically it is more than correct and, as is often the case with Crytek productions , the visual portion is taken care of. Some environments and caves (which are the corridors join the different zones) stand out, that fulfill their objective and make us feel there, in a jungle or inside the destroyed nurse, even more if our surroundings are constantly fluttering fireflies, moths. … In fact, aesthetically some passages come to remember Jurassic Park , with all the good that entails. 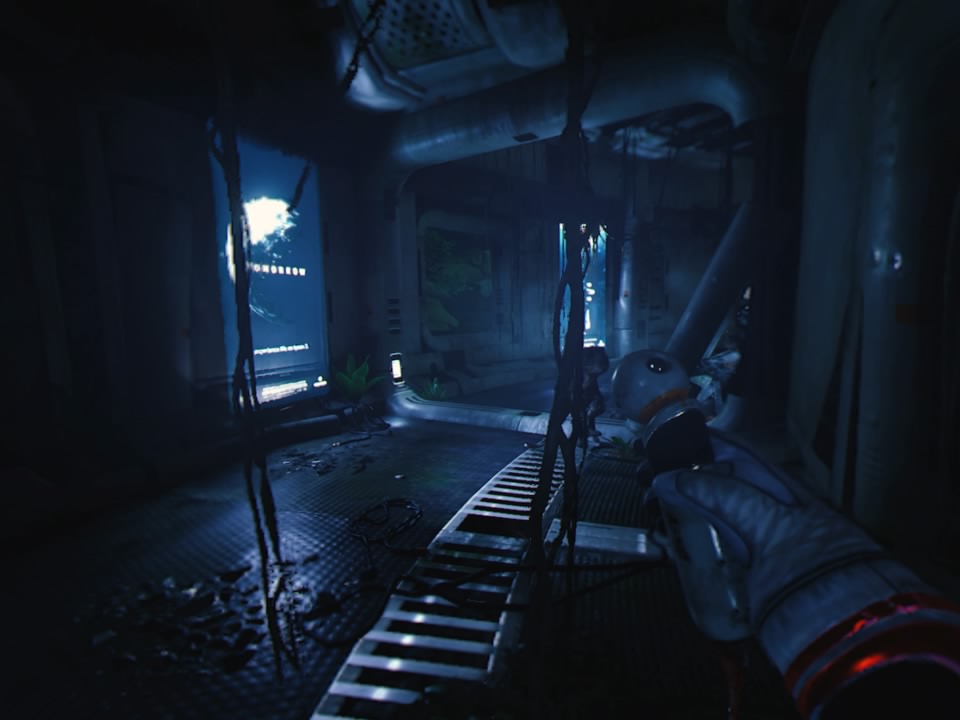 In addition, all these places have good visual details, with a neat atmosphere and lighting, not forgetting that many of them have their own playable details. In our camp, we can find “tablets” where to activate games like the hiding place with our mascot, the three in line or even throw basket baskets. In another area we have to complete a retinal scan, having to make the gesture of gluing the face to the sensor.

They are small playable winks that make Robinson The Journey an experience with memorable moments and that visually “hooks”, not forgetting that the sound plot is also up to: the dubbing to Castilian is fabulous, and the soundtrack is one of those that Are not easily forgotten (the subject of credit titles is those that are burned to fire).

But none of these goodness-es eclipses their defects, which also have them, as a visible popping (mainly in the more open areas) or textures that do not increase their resolution until we are literally on top. Or the long loading times when you start playing and then shine through your absence. It is nothing serious, nor does it affect the adventure excessively, but there they are. 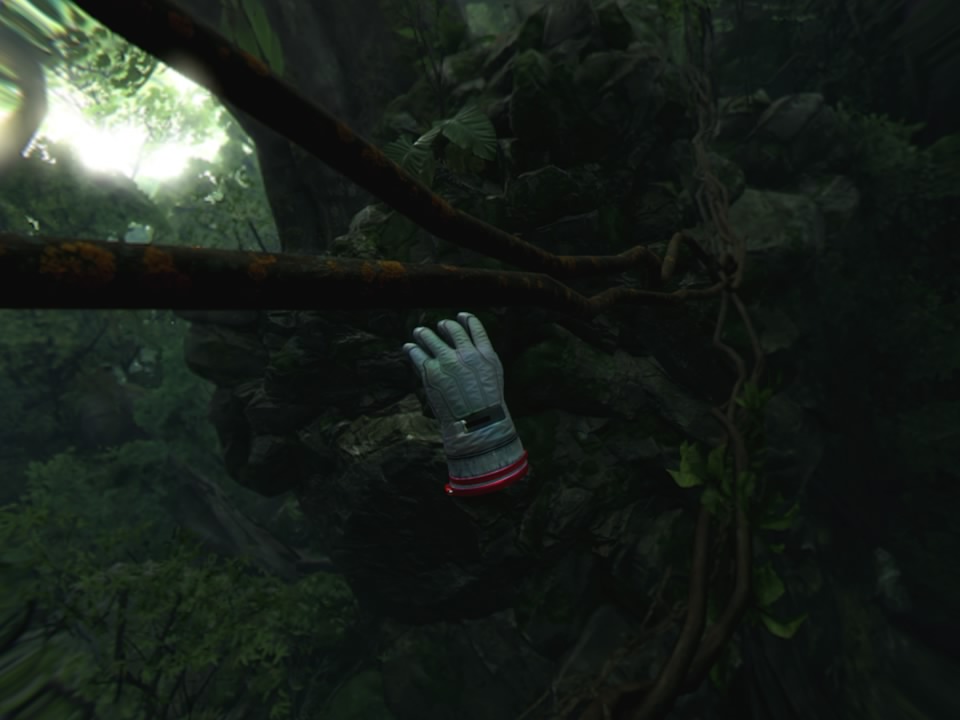 If we add that final precipitate, which leaves the door open for more adventures in Tyson III, and its high price $59.99, at the end there is the feeling of being before a title that could have been the great adventure that follows Needing the catalog of PS VR if its care had been taken more care (or softened its price). Yes, it offers optional tasks like scanning all the fauna, finding 13 special bracelets, performing secondary tasks such as helping a baby or getting all the trophies … But the most important thing you have already seen during the adventure.

For all this Robinson: The Journey is a title that, despite its good ideas, good staging and the moments it leaves imprinted on the retina, we can not recommend for its short duration and high price. It’s an interesting title, entertaining while it lasts … but that’s the problem: it lasts very little.

The Witcher 3 will have a version on PS5 and Xbox Series X and will be a free update
September 4, 2020