A great platformer game to enjoy by yourself or as a group, a must-have for every PS5 owner

2008 is a long way off when LittleBigPlanet was launched for PS3, a very original platform game that allowed us to create our own levels and share them over the internet, something that today seems the most normal thing in the world, but which at the time was very innovative, and also imagined a very striking visual universe with a lot of personalities, leaving the charismatic character of Sackboy as a legacy to the PlayStation universe. Its creators, the British Media Molecule, launched a sequel to this title in 2011, and from that moment they distanced themselves from the saga they had created, since the third installment, which was launched in 2014, was also dealt with by the British Sumo Digital, an off-road studio where they exist.

Creators of games as diverse as Sonic & All-Stars Racing Transformed, Snake Pass or Crackdown 3, now bring us back to the friendly character created by Media Molecule with Sackboy: An adventure in a big way for PS4 and PS5 and outright platform that leaves aside the content creation aspect of LittleBigPlanet to offer an extremely entertaining adventure that has surprised us a lot with its quality and creativity, and that any lover of jumping will love, whether you plan to enjoy it alone or with some friends.

The first thing we want to make clear is that in our humble opinion, LittleBigPlanet was never great platform games, with physics and control that left a lot to be desired, but that it is something that they were forgiven for by their versatile and powerful editor for creating levels, and all your visual imagery, a waste of creativity. So the first thing you need to know is that Sackboy Big Adventure has absolutely nothing to do as a platformer with LittleBigPlanet, and only borrows its universe to create something totally “new”.

And we say “new” because as it seemed to many from its first trailer, the inspiration in a title like Super Mario 3D World on Wii U (which will also come to Switch in February) is more than evident, it is undeniable, and not only in this, but in general in Nintendo platform games, like the Yoshi and so many others. And this is not a problem, in fact, it turns out to be more than a wise decision, to look at the kings of the genre, take good note of everything they do well and create something of your own. 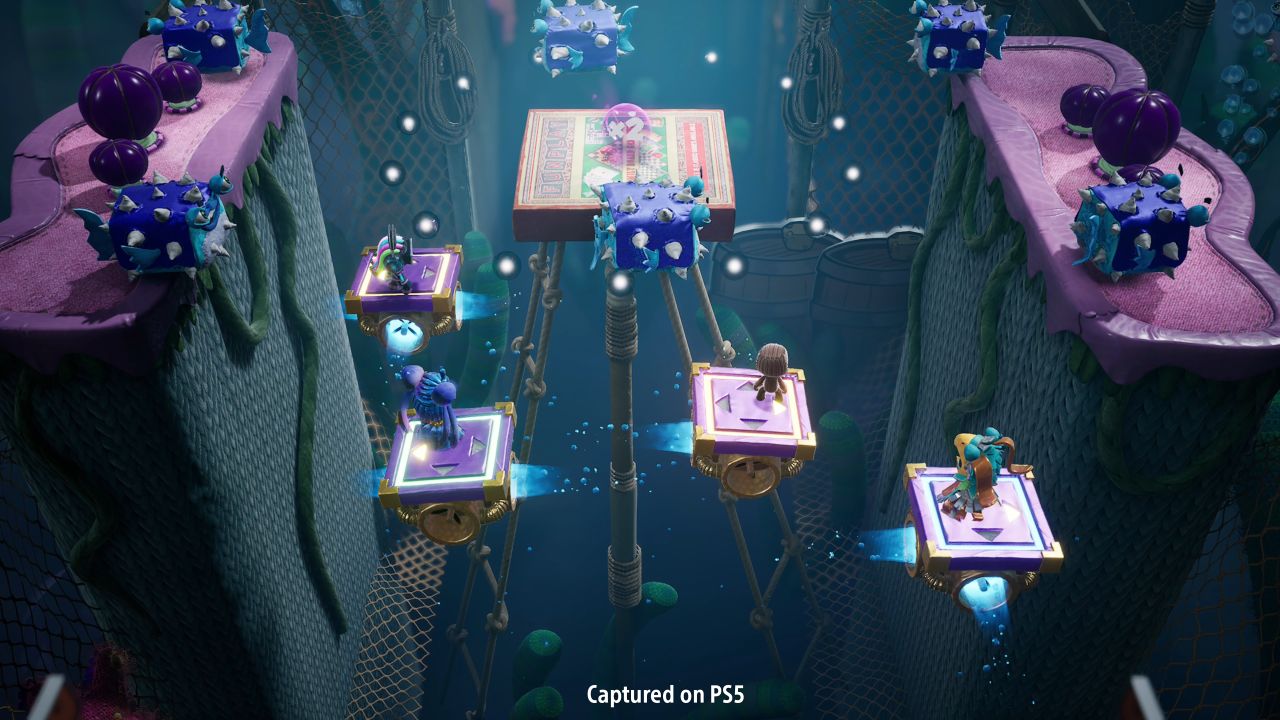 You can tell that in Sumo Digital he has sucked many and very good Nintendo games, but even to imitate -or be inspired, if it seems less offensive- you have to have talent, and Sackboy: An adventure in a big way has given us one of the greatest surprises that we remember recently, through creativity, good level design, sympathy and knowing how to condense everything that makes us adore platform games.

A game that doesn’t stop growing from start to finish

The start is slow and not too hopeful; the first levels are very simple, too easy and even at times a bit soulless, and it is difficult to predict in the first minutes the great platform game that you will find later. But little by little things are improving, it is growing, there are more and more mechanics, the situations are becoming more interesting and challenging, and the mane begins to loosen and surprise, with ideas that although they are not too original and we have already previously seen on other platforms (a genre in which nothing remains to be invented, Nintendo has creatively “swept” everything), they are perfectly executed and are always changing, and in each phase, they always have something new to offer us.

The control is very simple and accurate: we have an attack button since combat is relatively important in development, we can roll, something that is used to move faster or to give a useful impulse in the air, we can grab objects, what is used in all kinds of situations, including small puzzles, and when we jump if we leave the button pressed we flutter for just over a second in the air, a key movement in the whole adventure to correct our jumps, and that directly imitates games from Nintendo such as the aforementioned Yoshi or Super Mario 3D World. The latter title from which it borrows a lot of characteristics, such as the type of camera that follows the action (we cannot control it), it’s cooperative multiplayer for four and even directly traced situations, something that we are not going to focus on again but that it’s obvious to anyone who has played it. These are the movements necessary to survive the challenges that are being posed to us, because then, curiously, there are a whole series of quite useful actions that they never explain to you, and that we can consult in the pause menu. 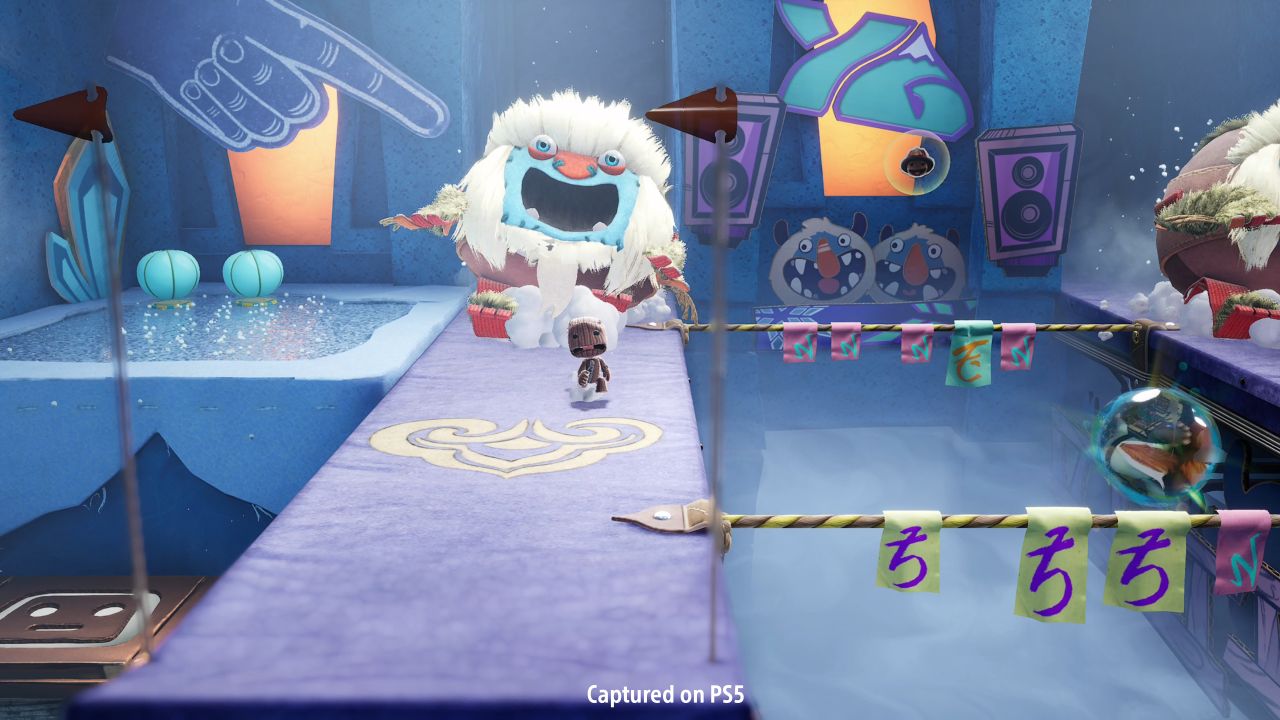 In addition, throughout the game, we are obtaining some objects that completely change the dynamics of those levels, such as a boomerang, a hook to grab onto certain surfaces or a kind of suit that allows us to plan and shoot. With these ingredients, its creators show a whole waste of creativity, in more than 60 different levels who almost never repeat situations and who always know how to surprise us with something new, something that makes it hilarious and that you can’t let go of the command. Because as we said at the beginning things start slowly, the first world is a bit dull, the second improves a lot, and in the third and fourth it takes off definitively, and it does not stop going up until the end, after which they are still waiting for us some surprises. 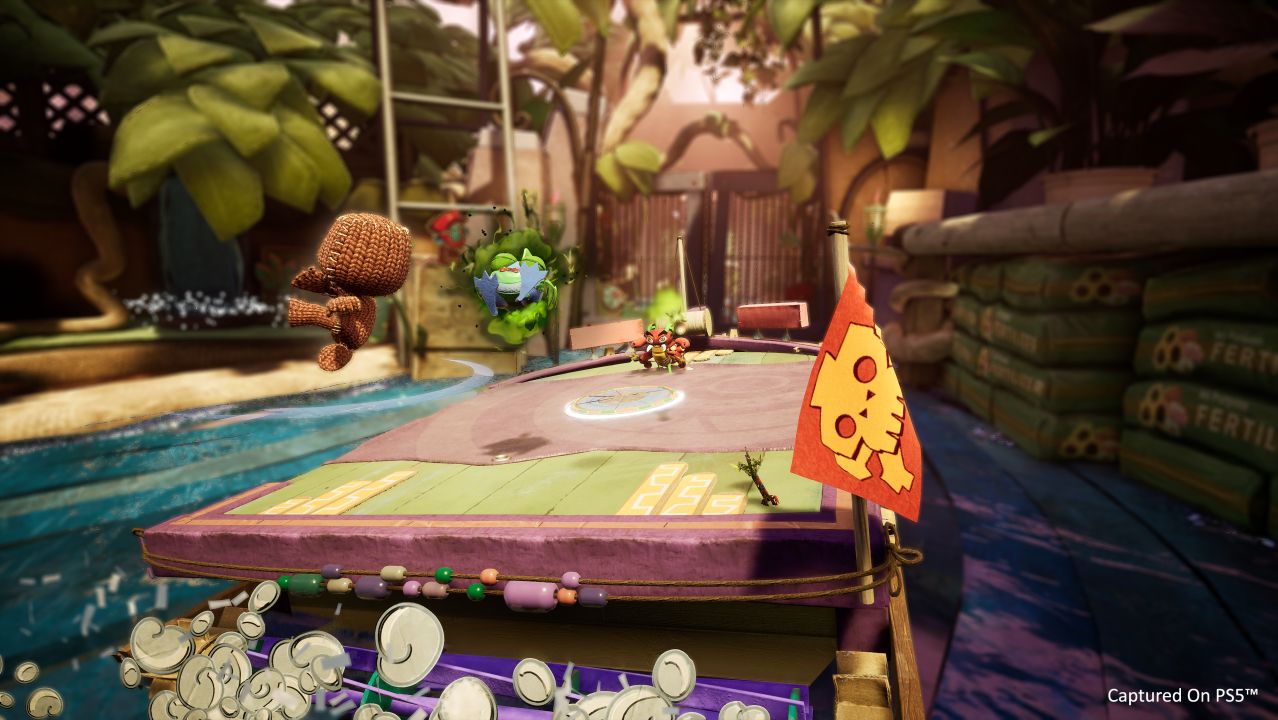 Much of the adventure is quite easy, it is very accessible and for all audiences, although it gets a little more complicated in its last phases. But rest assured, the greatest experts of the platforms, since Sackboy An adventure in a big way also hides great challenges for you, like some complicated time trials of pure and hard platform or doing the levels at 100%, something that has its crumb. Each phase hides several blue bubbles that are more or less hidden, the objective of finishing the level without dying even once, and then some scoring objectives of collecting a certain number of bubbles, which in the last worlds are not especially easy. 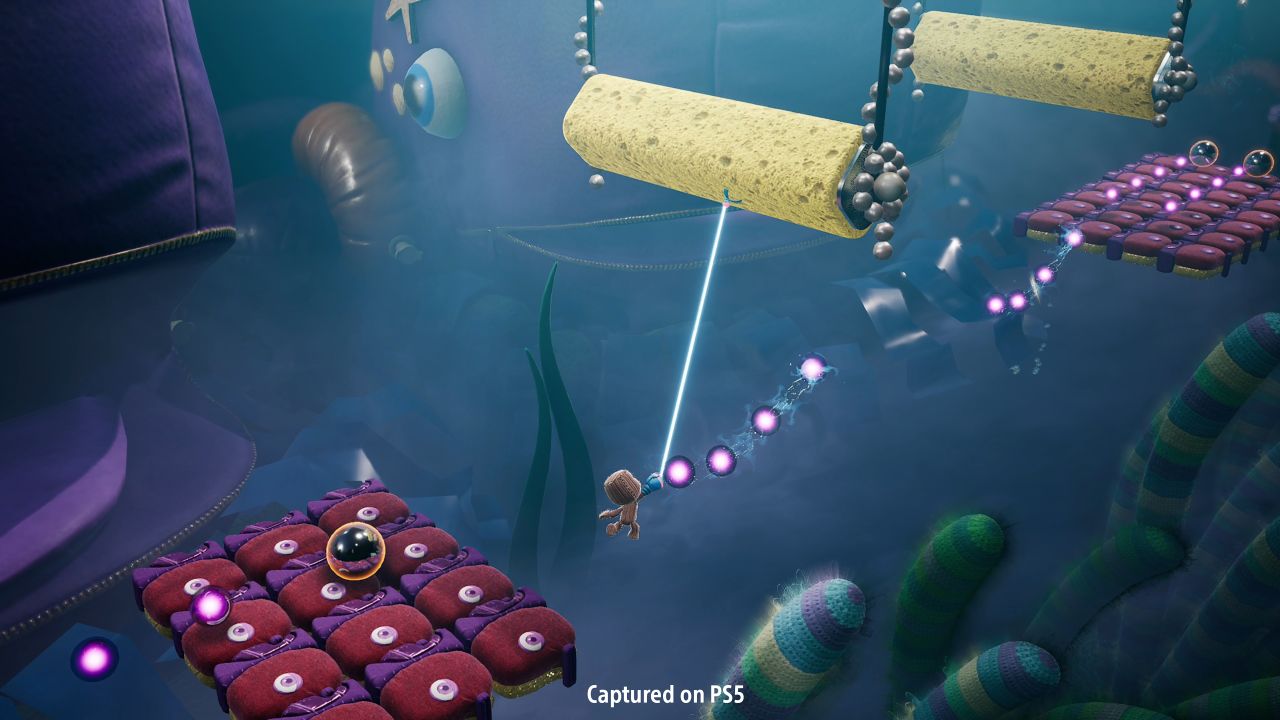 Thus, its main story can be completed in about 10 hours, a duration that is not bad for a platform, but if you want to squeeze it completely, something that lovers of the genre always like a lot, the thing can be close from 20 quietly. Another detail to note is that the levels always have the right duration, they are never too short or long, so it is not lazy to repeat them over and over again to get the most out of them, one more detail than many others that show that it is a game very well designed and with people behind who dominate and love the genre, who understand it perfectly.

Singleplayer or in a party, either way, it is just as good

Although it has been promoted a lot from the beginning as a multiplayer game for four players, fear not for this, it is just as enjoyable on its own, and the level design is not affected by it. Of course, there are some phases, not too many, that can only be played in a company because they have certain cooperative mechanics, so these contents cannot be accessed alone, they do not even let you play them. And here comes one of Sackboy’s problems, and that is that at the moment it only has local multiplayer, since online has fallen from launch, but at least it will arrive at the end of the year through an update.

A great control, good level design, accessible but also with challenges for the most expert, full of good playable ideas, and also a lot of praises to its audiovisual creativity. It is a very beautiful game, with a careful art direction and technically more meritorious than it may seem at first, it looks fabulous, and with a delicious 60fps. But where it has surprised us the most is with its disconcerting and crazy soundtrack, with a thousand and one styles, totally different themes for its enormous amount of levels and eye, versions of very famous songs, by artists as diverse as Bruno Mars, David Bowie or Britney Spears, starring in delicious musical levels. Some of them so surprising that they have left us with a crooked ass, so we will not go into more details so as not to spoil your surprise. 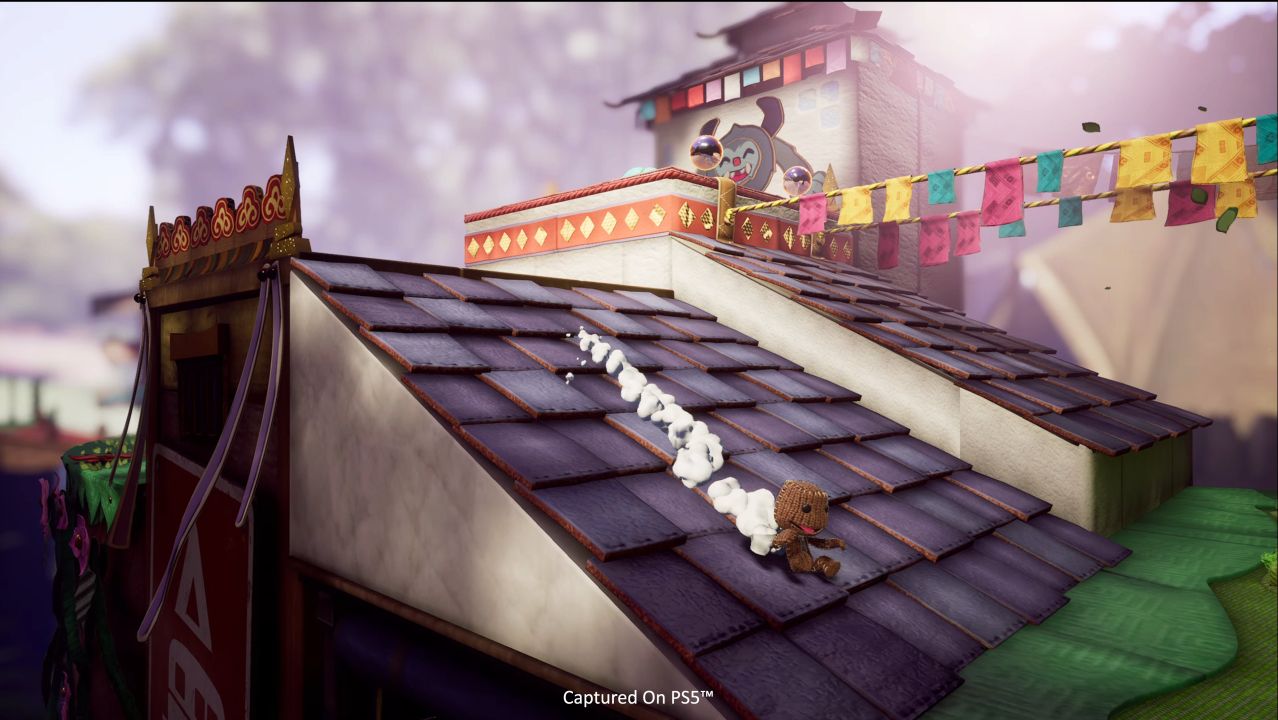 Also highlight the good use of DualSense, perhaps of the titles that we have tested from PS5 the one that uses it the most and best after Astro’s Playroom. You feel different types of surfaces in your hands, each gadget reacts in a different way, also using the adaptive triggers, and even uses the speaker of the remote in very nice ways. Its use as in Astro’s does not blow your mind, but so far they have worked more than the average.

The biggest surprise of the PS5 launch

We have not remembered in a long time a game that has so shut our mouths in a matter of a few hours. From how little we liked it in its first minutes to the total enthusiasm when finishing it, an adventure that continues to grow and improve with each passing level, and that we have found one of the best platforms we have enjoyed in recent times, and if you love this type of game we are sure that it will surprise you just like us. The PlayStation catalogue needed a title like this, and together with Astro’s we are happy that platforms are once again so taken into account, something that I hope is not a flower of a day and predicts a generation with many and very good jumping games.