We put on the Spider-Man suit again in an entertaining and spectacular action-adventure sequel to the last game.

On June 11, at the event where the PS5 was first shown, one of the biggest surprises was the announcement of Spider-Man: Miles Morales. And not because we were surprised by the existence of a new installment of Marvel’s Spider-Man series, one of the greatest successes in the history of PlayStation, but because of its proximity in time, since this game was launched in September 2018, and Currently, a triple-A of this size takes three or four years of development, at the very least. Therefore, there was some confusion in the first hours after its announcement, whether it was an expanded version of the first, an expansion or a completely new game. From Insomniac Games, they had to go out and explain what it was a new Spider-Man title with its own entity, and they used the example of Uncharted: The Lost Legacy so that we could get an idea of ​​its size.

And that is exactly what we have found, a spin-off of the 2018 game that takes advantage of its setting and the vast majority of its playable mechanics to tell us a new story, this time starring Miles Morales, a second Spider-Man who tells with its own powers, abilities and a different personality and social environment, in a very continuous title that cannot be considered a true sequel, and that offers just half the content of the original, about 8 hours to complete its main story and up to 15 hours max if we want to complete everything. We understand that not all games have to offer 100 hours of content and make us wait for years, but that when sold at full price – and not reduced, as they did with The Lost Legacy – it may disappoint some players they expected something more ambitious.

The story picks up right where the first game left off, with two Spider-Man in town: Peter Parker and Miles Morales. The first is the veteran, who has been working as a superhero for several years, the second a rookie, who is still learning to perform such responsibility tasks. After a spectacular start in which both team up to face Rhino, Peter Parker decides to take a vacation in Europe, leaving only Miles Morales as the protector of New York at Christmas. A straightforward premise works great, and that serves to know in depth this character and his social environment and his past. How could it be otherwise, things will gradually get complicated, and he will end up facing a great threat while he matures in the process and rightfully becomes a true Spider-Man. 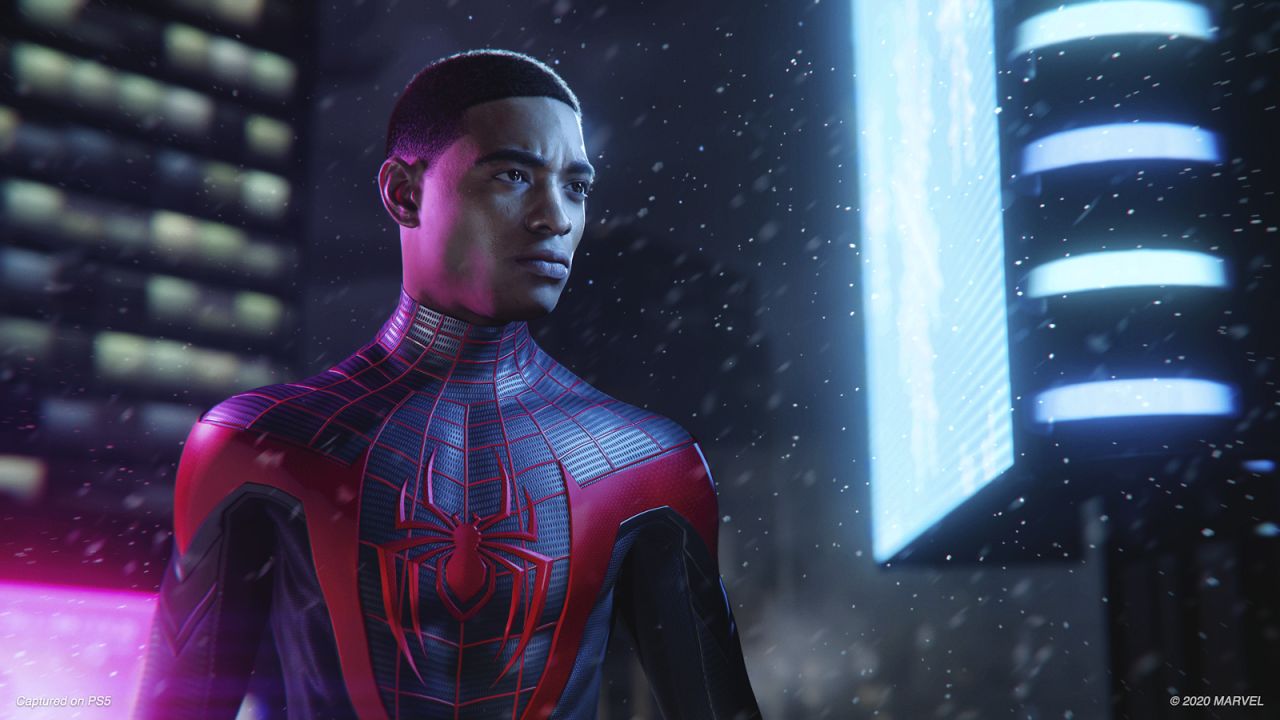 The story in general lines has not seemed any wonder to us, and it shows that it is not very important for the series. It does not plant great seeds for the future, fulfilling the origin story of Miles Morales. Still, it must be recognized that in the same tone as the first Spider-Man, we have a very well-written game, with truthful characters with whom it is easy to empathize. Its narrative is enjoyed with pleasure, showing a different face of New York, Harlem, and more multicultural.

If in the narrative it is not surprising, although it is more than enough, in the playable it happens three-quarters of the same, it recycles the fantastic system of displacement through the city and the hilarious and spectacular combat system of the first, to which some actions and powers are added new. Thus we have different types of bioelectric attacks called poison abilities, with which we fry enemies and perform forceful combos. A new, beneficial power that allows us to become invisible and thus be able to clean the enemy’s scenarios without them seeing us. Manages to enhance stealth, which is a little more interesting in this installment. Like the hologram, there are also new gadgets that display holograms that fight at our side, remote mines, which electrocute enemies, or gravity well that attract rivals and knocks them down. 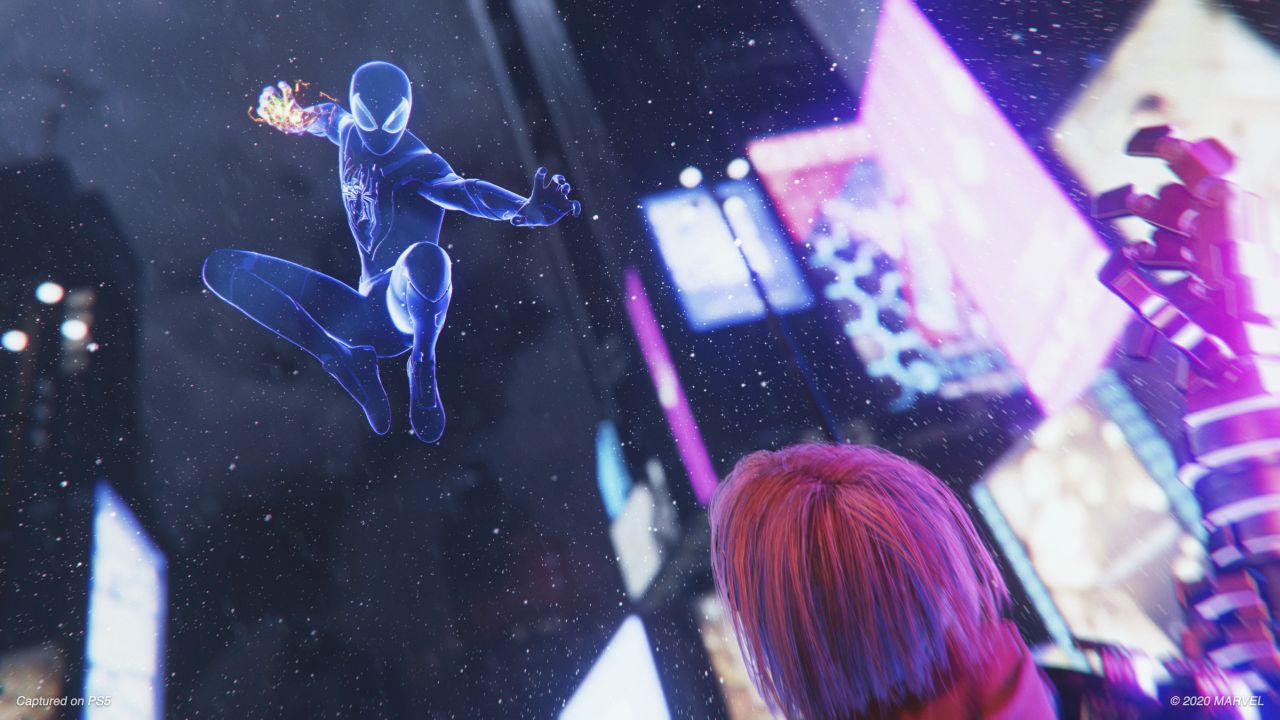 For the rest, there are no major novelties, neither in the way of playing nor in the design of situations itself, with story missions, the most spectacular, which try to be relatively varied with narrative, combats, chases, some moments of stealth and even Straightforward puzzles, also having different types of activities and secondary missions, as well as the unavoidable collectibles and the possibility of unlocking different suits, some very cool like the Spider-Cat.

In short, Miles Morales is exactly what it seemed, an expansion game that recycles everything good from the original so that we can live new adventures, in an experience that, as we said at the beginning, is more contained but just as fun and spectacular, and that you drink without realizing how entertaining and well done it is.

4K with ray tracing or 60fps

Spider-Man: Miles Morales arrives with the responsibility of being one of the launch games for PS5, although it is also released on PS4, and in this specific task, we believe that it fulfills half; we go in parts. Visually it looks great, as the 2018 title already did, being especially brilliant in how well it integrates the scripts and cinematics into the action and in the wonderful animations of the character, which you never tire of seeing either fighting or scrolling through the city. 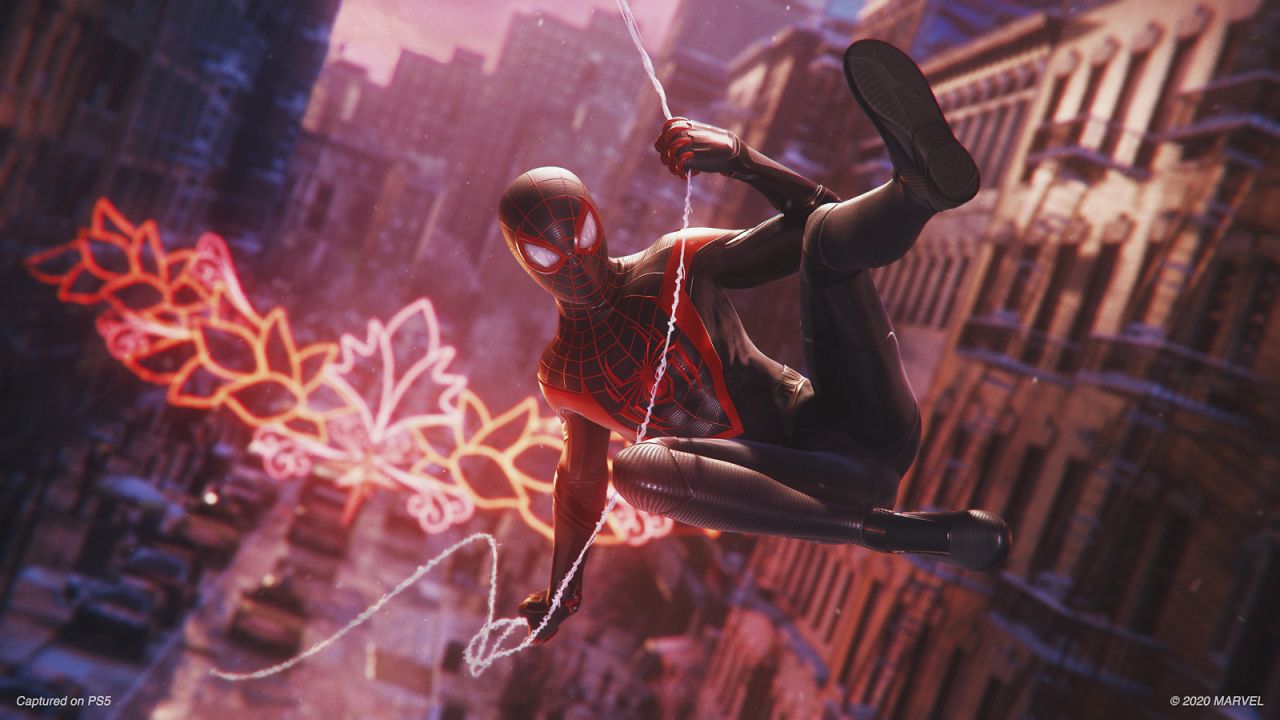 We can choose between a Fidelity mode at 4K and 30fps, with ray tracing, improved lighting and additional effects, and a Performance mode at 60fps, without ray tracing and fewer graphic effects. These two options seem like they are going to become almost the norm, at least in the first big PS5 exclusive games ( Demon’s Souls Remake and Ratchet & Clank: Rift Apart will also offer these two modes), and we think it is great that they give this option to players since we know that this is something very personal: some players prefer the highest possible graphic quality and do not mind playing at 30fps, and others prefer the fluidity of 60fps above all, as in the case of those who sign These lines.

Starting from the fact that it is still an improved PS4 game that does not suppose a great visual leap, it does seem like a real improvement to the experience to be able to enjoy those vertiginous and stylistic movements around the city at 60fps, as well as the spectacular movements that We perform in fighting, which is a joy to behold at this frame rate. But in this nobody is right, it is something very personal, and welcome is the possibility of choice.

We’ve also been able to test the PS4 version, and the game looks and plays great, as did the first Spider-Man, so don’t be afraid for this version as they’ve done a great job; it’s just as enjoyable.

Somewhat disappointing use of the DualSense

After playing Astro’s Playroom, the title that comes installed with the console and that has left us open-mouthed with its use of haptic response and adaptive triggers, we expected something slightly similar in Miles Morales, and we were disappointed, That is not the case, and it has even put fear in our bodies. Because if a PlayStation Studios game like this doesn’t make prominent use of haptic feedback, what will happen to the rest of the third-parties? Hopefully, it was only due to the rush to launch or the fact that it also appears on PS4, but we found its use of the controller disappointing. Because the adaptive triggers do not work well either, since they change resistance dynamically when we move through the air, the truth is that it seems to us a fairly discreet use and that it does not contribute much.

Where PS5 games do not disappoint at the moment is in the use of SSD storage, which is simply amazing. One of the great novelties of this new console is the speed of access to data, and in Miles Morales, we can already see first-hand the virtues of the new memory. Starting the game completely closed and loading a game is a simple process of about 7 seconds, and taking a quick trip from one end of the city to another takes just 2 seconds, which is amazing. The SSD offers one of the biggest user experience improvements that we remember in any generation change. We are also curious if it occurs to them to do something with this in the games’ design.

Marvel’s Spider-Man: Miles Morales is a great action game that keeps all the good things we liked so much about the 2018 title to tell us a new story, that of the second Spider-Man, the charming Miles Morales. It is continuous, yes, and it does not contribute great news, it is definitely a less ambitious adventure, but it is just as fun and enjoyable. Only the expectations as a launch title and the message they have sent with their price are what works against them since we face a good “delivery bridge” until the real sequel arrives.

We prepared this review with a copy of the PS5 version of the title provided by PlayStation.