This War of Mine a game about stealth, survival and narrative adventure set in the most forgotten side of the war finally comes to Nintendo Switch in its most complete version.

This War of Mine launched in 2014 and presented us with a unique and radically different vision of the war. As a video game, decided to move away from the usual perspectives of action, with heroic soldiers and irreproachable armies in their missions and showed us the consequences of war on ordinary citizens. 11-bit Studios developed an interesting title, focused through the mechanics of stealth, survival and narrative adventure, showing us the sinful lives of those who get trapped between the flying bullets and exploding of the bombs.

This War of Mine will leave you speechless, both for its well detailed and efficient presentation in noir and comic style as well as the story and character are very real in their creation. The game was out on other platforms for couple years and finally comes to Nintendo Switch as a more complete edition and offers some of the hardest moments ever shown by a video game and shows that the experience can be adapted to a portable console without losing its impact and value.


The horrors of war

This War of Mine was created by Grzegorz Miechowski, a game telling the hardships of a group of survivors of the Bosnian war. It described the harsh site of the city of Sarajevo during the conflict, which was absolutely blocked for 44 months and in which between April 1992 and February 1996 more than 12,000 people killed, many of them civilians. The story emphasized the daily struggle of those who did not want to leave their homes, being forced into a hard race for survival looking for resources and, even more desperate, stealing from them by using force and violence. Miechowski found very hard testimonies, indiscriminate attacks of snipers, rapes and mass murders. 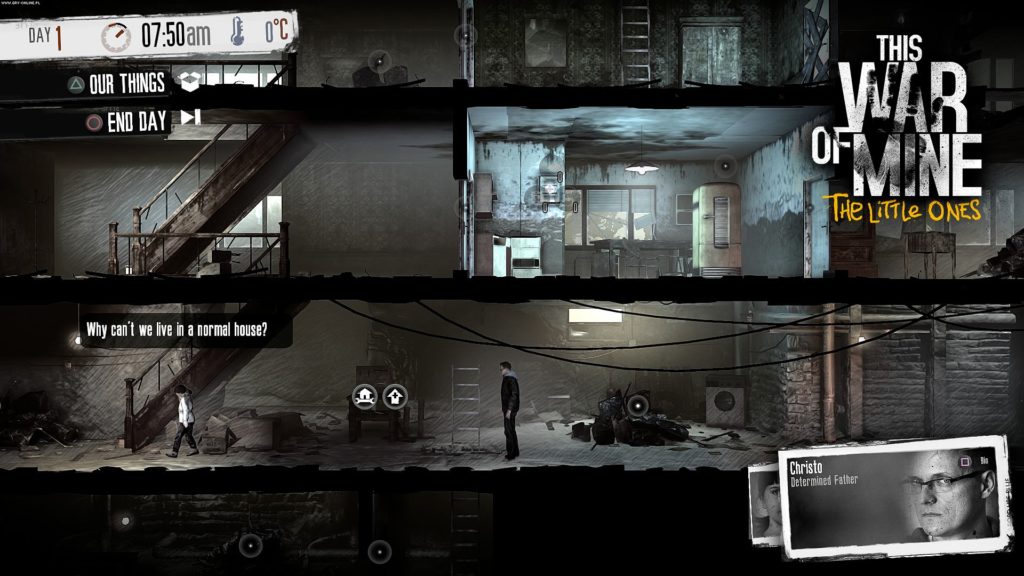 Through real stories and fictional elements, This War of Mine elaborated its gameplay, always trying to bring a true and credible look to this delicate situation. Perhaps it is the videogame’s greatest virtue: that it manages to become witnesses to the terror of war in such a daily and real way that it scares us. The Nintendo Switch edition includes the base game, as well as include downloadable content that has been distributed over the years and adaptations to consoles. We are facing a remarkably complete version of the title, which perfectly brings the entire package to date in the same presentation.

For anyone who does not know This War of Mine, here is a summary: it is an experience of survival in a warlike conflict. It is not a classic action or adventure title, one of the ideas that we like most about the game is that it always seeks to bring an unpredictable vision and tension. There is no comfort zone or structure to feel safe beyond our battered shelter.  We must try to hold a series of days until the declaration of the ceasefire. During this time we will be constantly moving through different locations searching for food, building better pieces of equipment and avoid being taken by the cold, diseases, hunger or soldiers – or in the worst case, by other survivors. The days and nights will happen, and the only objective of the game will be to survive.

This is a very rough game, that lacks tutorial and it will throw you to the challenge of survival of the fittest. Arranged from a lateral perspective and 3D graphics created based on sketches, lights and shadows -the comic style feels great. This War of Mine will invite us to explore the different rooms of the mansion where we began our journey, digging in the rubble, collecting materials and looking for basic elements such as water or wood, which will be the key in order to build and develop better objects to survive the day. As in the other versions, everything is marked with small visual cues and small points of interest. If you come across to a refrigerator or a mountain of rubble you can search and may find stuff. A jammed door might open with an explosion, or you may need a shovel. There is a lot to do in each place, and also lots of hidden collectibles.

As similar to the other survival video games, we must bear in mind that all the actions we perform have consequences or penalties. We can not stop eating or resting because our survivors will get tired or hungry, and if you carry excess loads, your character will slow down, he/she might even get seriously ill due to cold or rain. In addition, our survivors -which are generated randomly in each game- have unique characteristics, being some more skilled in certain skills, others more resistant and physically stronger and others more balanced. Ideally, as in almost any management game, manage them and rest them so they do not die or are damaged by excessive actions. 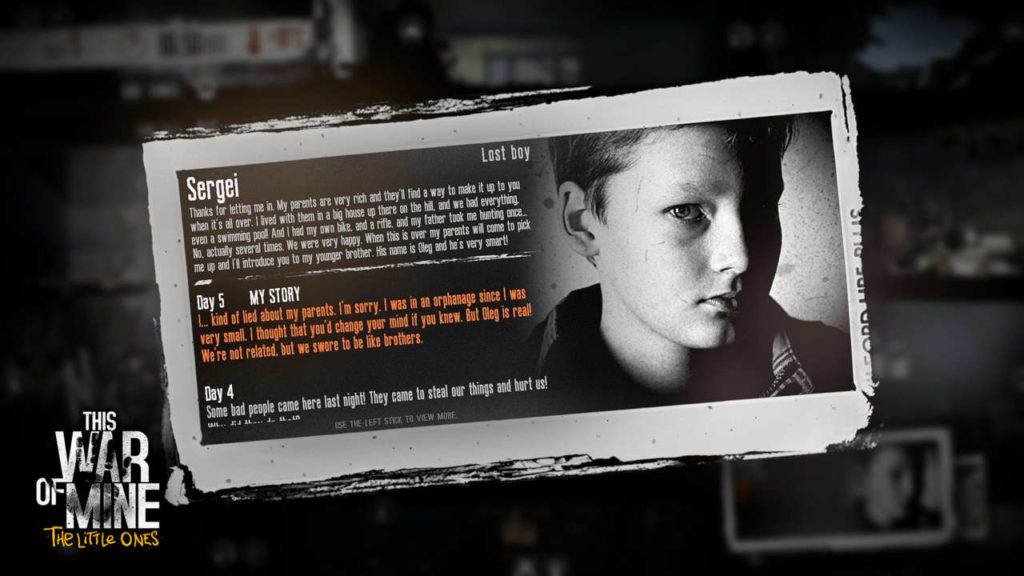 This War of Mine is a video game that has no mercy, and a bad decision can make the game very challenging. The search for food and objectives during night times are very complicated and will test our nerves on many occasions. The looting in the different locations of the city will lead us to face against other survivors and snipers or soldiers, you always need to stay silent. Hospitals, schools, gas stations and hotels will be some of the scenarios and will represent real challenges. 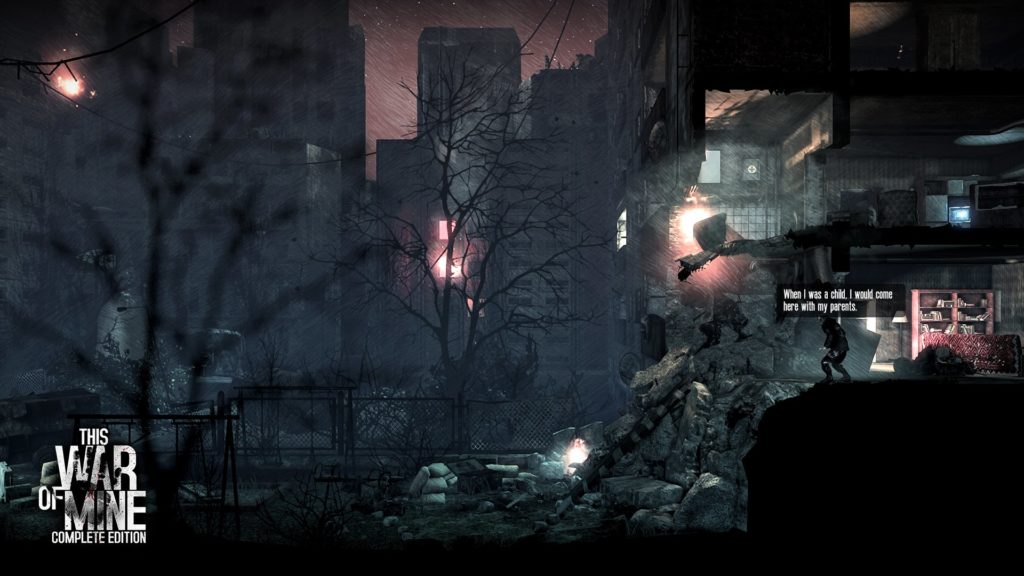 This War of Mine is a very complex survival adventure, in which managing what we have, what we can have and our own security, will go hand in hand. All this is watered by small stories and very dramatic situations, partly seasoned by the own past of the protagonists and survivors, those we will be having special relationships. There is a very emotional connection with the characters we control, especially when there are children we must pay much more attention, something that manages to completely present the best of the senses. The DLC for The Little Ones has focused the point of view on the little ones. 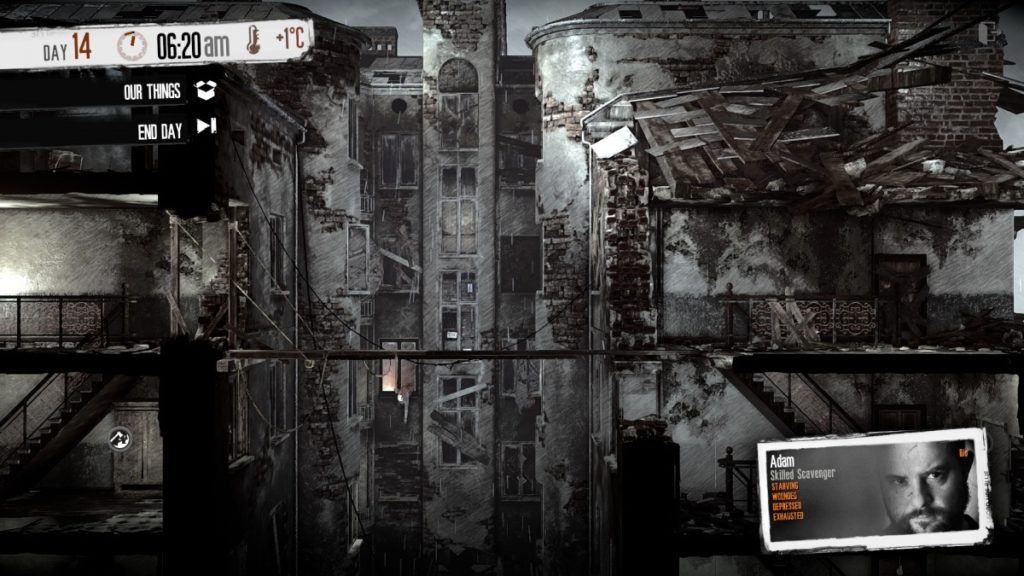 when the title release on Xbox One and PS4 back in 2016, and beyond including kids as new protagonists, has added a scenario and character editor , which will allow us to create a game at will, choosing many parameters that will go from the days that we have to survive to the type of conflict or rawness of the environment. In addition, the so-called Stories are added , some chapters very focused on the narrative that many liked especially the dramatic objectives -like the loss of a daughter that we must seek after being kidnapped as a safe conduct to exit in a humanitarian corridor- and offer a series of elements and goals that invites us to play.

A great adaptation to Nintendo Switch

The control has been specially adapted to Nintendo Switch, keeping the classic interface and developing a mapping of controls very similar to the editions of Xbox One and PlayStation 4, both in portable mode and in television mode. Especially noteworthy in the portable mode is the immersive capacity that is generated, with an intelligent use of the JoyCon HD vibration. Technically This War of Mine maintains the same aesthetic line of its previous versions, presenting us a 2D perspective with three-dimensional graphics, touches of sketch and particular lighting in a special way, presenting a dreamlike game art feels almost nightmarish. Another very interesting aspect, and one that demonstrates the psychological study that exists behind the game is the use of the faces of the characters that we play.

To achieve a greater emotional bond with the player, the title includes photographs of real people to detail the biographies and personalities of the virtual characters. Interestingly, 11-Bit Studios explained, they are some of the programmers and designers of the game. In addition, the visual identity of the game is strongly seasoned with a very ambient soundtrack and a series of very realistic and omnipresent sounds and sound effects, such as the shootings and explosions. 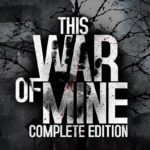 This War of Mine: The Complete Edition is a more than a remarkable version of the famous video game from11-bit studios, which is now ported to Nintendo Switch, bringing all the content released to date in a full package for the price of one. It continues to offer us a very tough and dramatic survival experience, with some of the most moving and complicated stories and decisions we have ever experienced in any game. It is very entertaining, offers us a small look at the sad reality faced by millions of people back in history.