Attack on Titan receives a faithful and entertaining action adventure that knows and perfectly captures the essence of the work created by Hajime Isayama.

We expected all along that sooner or later end up getting a game for Attack on Titan, the popular manga created by Hajime Isayama.


A success that has had much to do with the animated series that aired in 2013, which helped turn this intense story popular around the globe, thanks to its great animation, good design, great soundtrack and fidelity to the original material, with an intriguing script full of twists and great battles.

Couple years ago an attempt was made to bring the  Attack on Titan to Nintendo 3DS turned out pretty bad and failed miserably. But later Koei Tecmo announced that Omega Force was preparing a new Attack on Titans for home consoles, PS Vita, and PC. 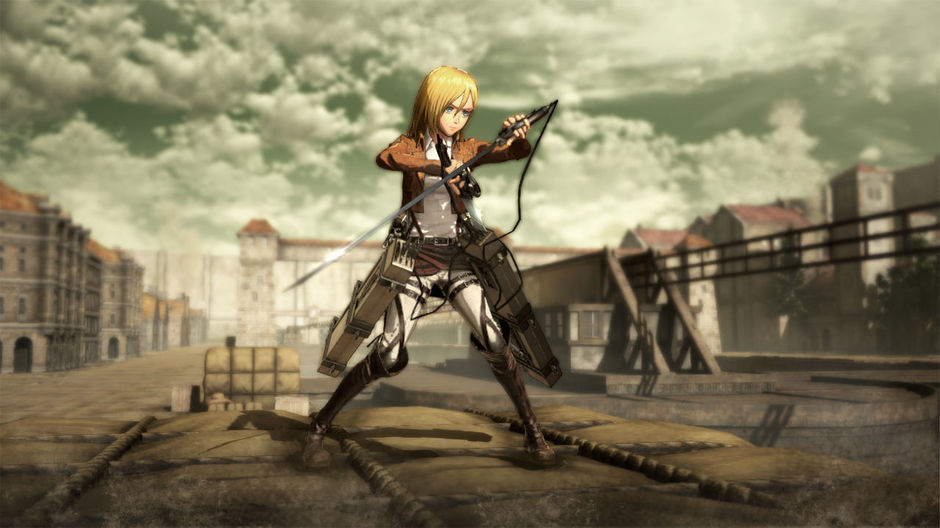 After spending a good amount of hours with its final version, we can confirm that if you are a fan of the series, then you are in luck because AOT Wings of Freedom offers one helluva experience as fun as faithful and hardly disappoints.

For those who do not know anything about this manga, it tells the story of a world threatened by giant Titans who are just looking to eat humans. Therefore, humanity takes refuge inside a layer of isolated areas surrounded by giant walls, which allowed them to survive and thrive for 100 years free from being an appetite to these giants. As expected, the series begins the day when a gap opens in the outer wall, allowing the entry of these giants and starting a new battle for survival.

To deal with them teams of three “Scouting Legions” who are equipped with a special tech that has two hooks to launch from ground and a gas tank to increase the momentum, so the characters can move through environments just like Spider-Man, which is essential to fight the Titans, as their weakest point is their necks. 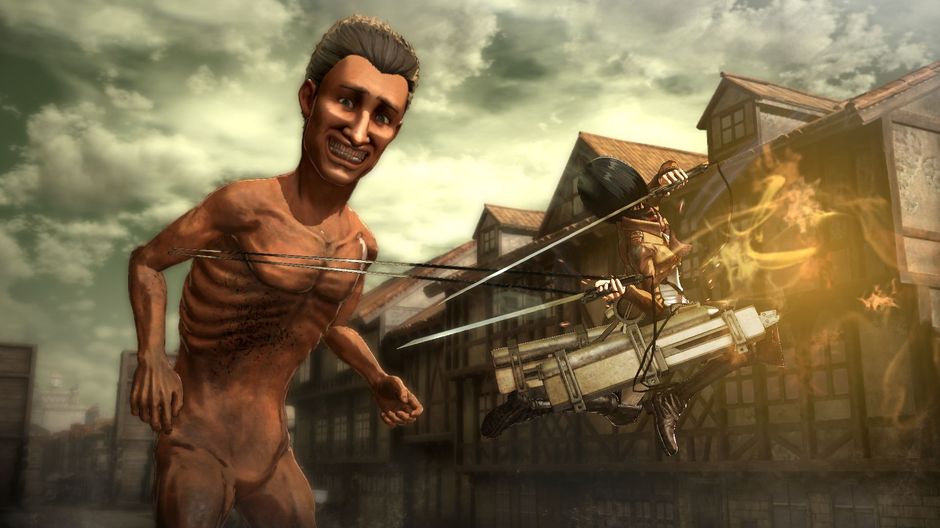 The story mode follows the plot of the first season of the anime with great fidelity, give us a chance to relive its main action sequences and epic moments. The narrative is somewhat accelerated without missing anything important. If you are new to the series, don’t worry, that the story is well told and anyone who has never seen the series can understand what is happening at all times.

Gameplay controls had been resolved to allow us to do everything we have seen in the anime series and luckily this has been resolved in the best possible way. Learning the controls does not take long to get a hold of, in no time you will flying at full speed and killing titans one after another. 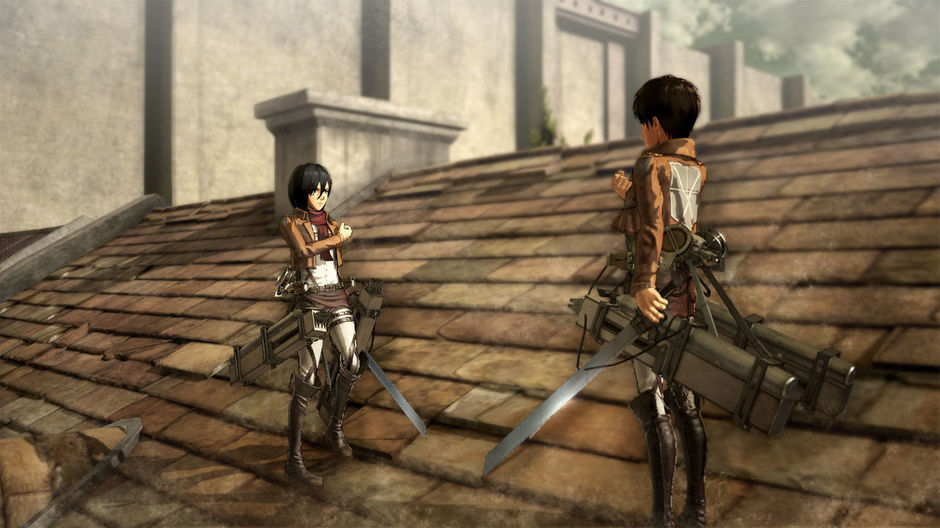 Maneuvering through the level is surprisingly simple and intuitive, simply pressing the square button, our character will throw their hooks (if you have somewhere to cling), climbing walls or to move around the map uses the same scheme, so our only concern will be to lead where we want to go once airborne, and that’s when you can use your gas tanks to propel and gain speed.

The battle against the Titans not that complicated, using R1 and the analog, just point to the Titan you want to attack (arms, legs or neck) and can throw your hooks on them to slash, of course, you have to time the triangle button and perform the slash at the right moment, or you miss. Titans will not die unless you land your attack to their weakest point on their neck.

As you can see, the main gameplay has all kinds of fancy and spectacular actions, facing the Titans alone, is a fun and rewarding experience. Also, it is worth noting how well the physics of our hooks plays, in case if they collide with a tree, obstacle or even another titan, most likely you will lose your grip, plus finding the best angle to attack. Of course, these beasts will not stay still and move while you try to slash their neck, so it’s crucial to stay active and change position at all times. 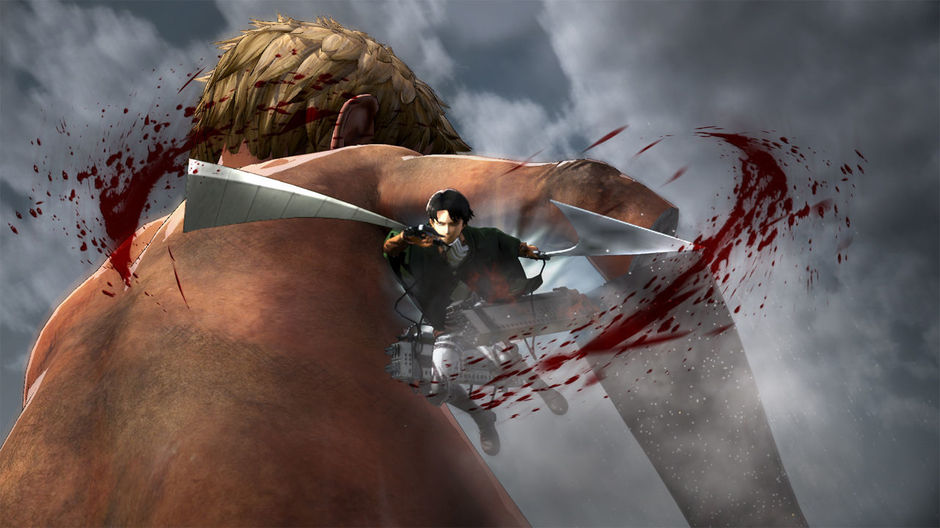 However, the auto marking system has some issues, such as when there are more than two titans in your view, it’s a real hassle to aim to the one we want to attack, it’s usually picking the one close to you in general. Also, sometimes the camera gets buggy when a big element gets in its way. These happen in certain situations, although it gets frequent when you progress further in the story where scenes get more complex.

As you progress further in the story, you get large maps with different objectives accomplish, such as escorting someone, defend a position or kill a certain amount of titans. There are no intense decision-making moments here; you always have more than enough time to fulfill all the side missions and support your teammates. In summary, your priority is to kill Titans and some quests on the side. 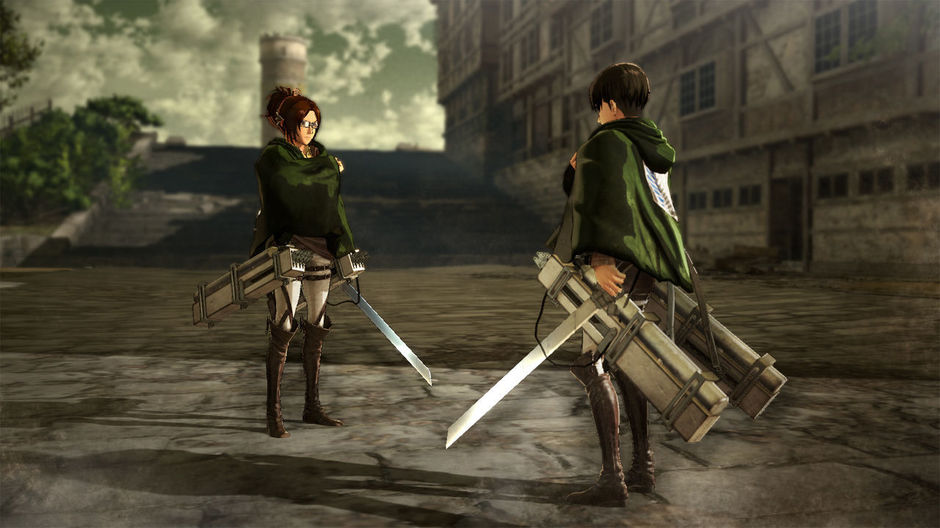 There are no unexpected turns in the course of the battle that require you to adapt to or rethink your strategies. The Attack on Titan is about killing Titans, and that’s what we do here from start to finish, if you want to challenge yourself, you can try to get S rank in each level, which requires you to complete certain steps. 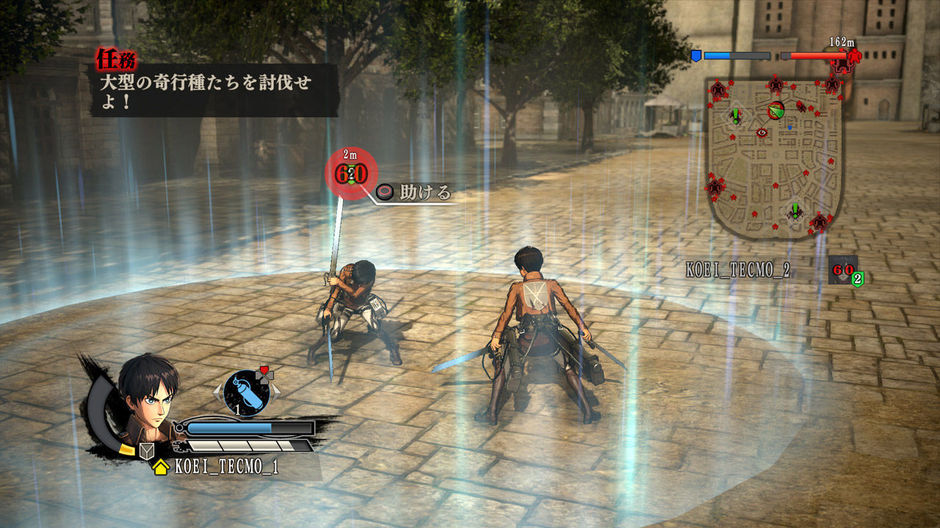 The Titans you will face throughout the game are pretty similar and lack variety, and almost every fight feels same, except the battle against ” bosses ” where you need to apply slightly different tactics to beat them. Despite all these issues, AOT Wings of Freedom is fun and engaging. It’s best to take your time than rushing the campaign.

Also, you will have an enormous amount of additional side missions to accomplish, and by completing those missions, you can unlock even more upgrades. These missions in Story Mode can only be played individually. Although in online co – op with up to three players, you can play them as well and your progress, whether you play solo or co-op, is shared, which is great so you don’t need to replay the same mission. The game features a simple progression system, which encourages to develop new equipment with materials you get for completing missions. These objects can be used to create, or upgrade.

Once we complete a level, the game rewards us with experience for both the Scouting Legion and the character that we used. Once you level up, you can unlock new equipment. As mentioned, the progression system is simple. All heroes share the same pieces of equipment. 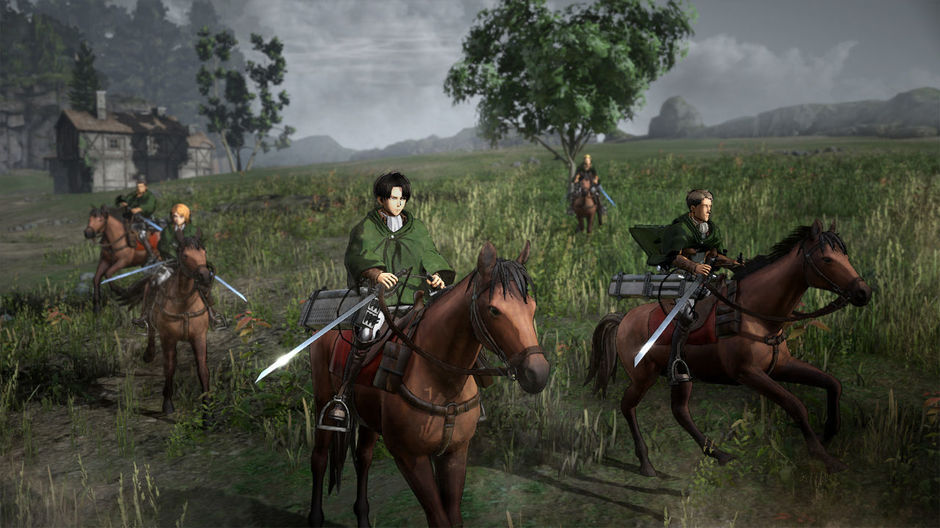 You get ten different available characters to pick: Eren, Mikasa, Armin, Jean, Sasha, Connie, Krista, Levi, Hange, and Erwin. Their controls are pretty much the same, and each of them has small features and abilities that differ from each other which fit well with their personalities and combat style. You will only have ten levels to upgrade a character, and your choices can not be changed so that in the end it is a very linear progression and not customizable. 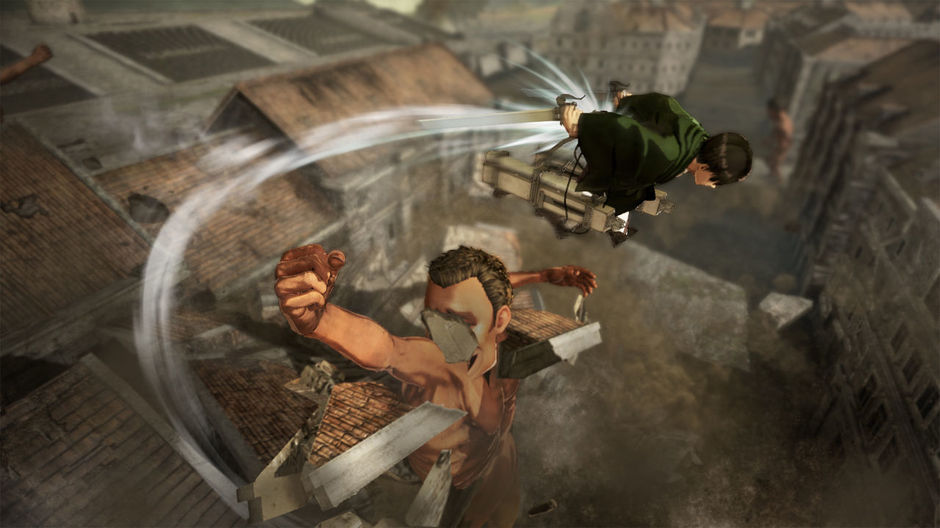 Regarding graphics, the game that captures the essence of the series well. The modeling of the characters is very true to its original, and their animations are quite good, especially when you move at full speed across the stage, you see the same poses and movements they used in the anime. However, the levels are quite poor; it’s unfortunate that we can not tear down buildings and trees. There is frequent object popping on screen, especially when we move very fast through the level. Along with some minor visual bugs, and some clipping.

Regarding sound and music, unfortunately, they haven’t kept the great soundtrack of the series. Instead, there are a series of compositions which is not bad, but somewhat generic. The sound effects are all very recognizable and great, spoken language is the original Japanese, along with subtitles in English. 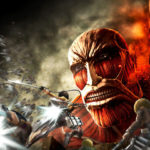 AOT Wings of Freedom is probably the most faithful adaptation of the successful manga series, and brilliantly capturing its essence to offer an action adventure that will keep you entertained for hours taking down a titan after another. If you’re a fan of the series, this a very promising title and a must buy!