Bloober Team has found its comfort zone in fear. After trying many genres, Layers of Fear managed to put the studio on everyone’s lips, and since then, they have focused on psychological terror. In just three years, we have been left with the remarkable Observer and the somewhat disappointing Layers of Fear 2 . Now, and almost by surprise, they try their luck with one of the most mediated horror licenses in cinema: The Blair Witch.

Blair Witch is a first-person psychological horror game in which we have to investigate the disappearance of a child in a remote forest with the only help of our dog, Bullet. We are not completely disconnected from the world since we also have our mobile phone and a walkie-talkie to communicate with other characters, something that will serve to advance the story and, at certain times, receive somewhat cryptic messages that will make us more nervous yet.

The relationship between our protagonist and his dog is, in theory, quite important, although not so much in practice. We can perform different actions with him (ask him to walk by our side, stay still in a place, look for something, scold him or caress him), although, in the end, the only useful thing at the playable level is to send him to look for him. 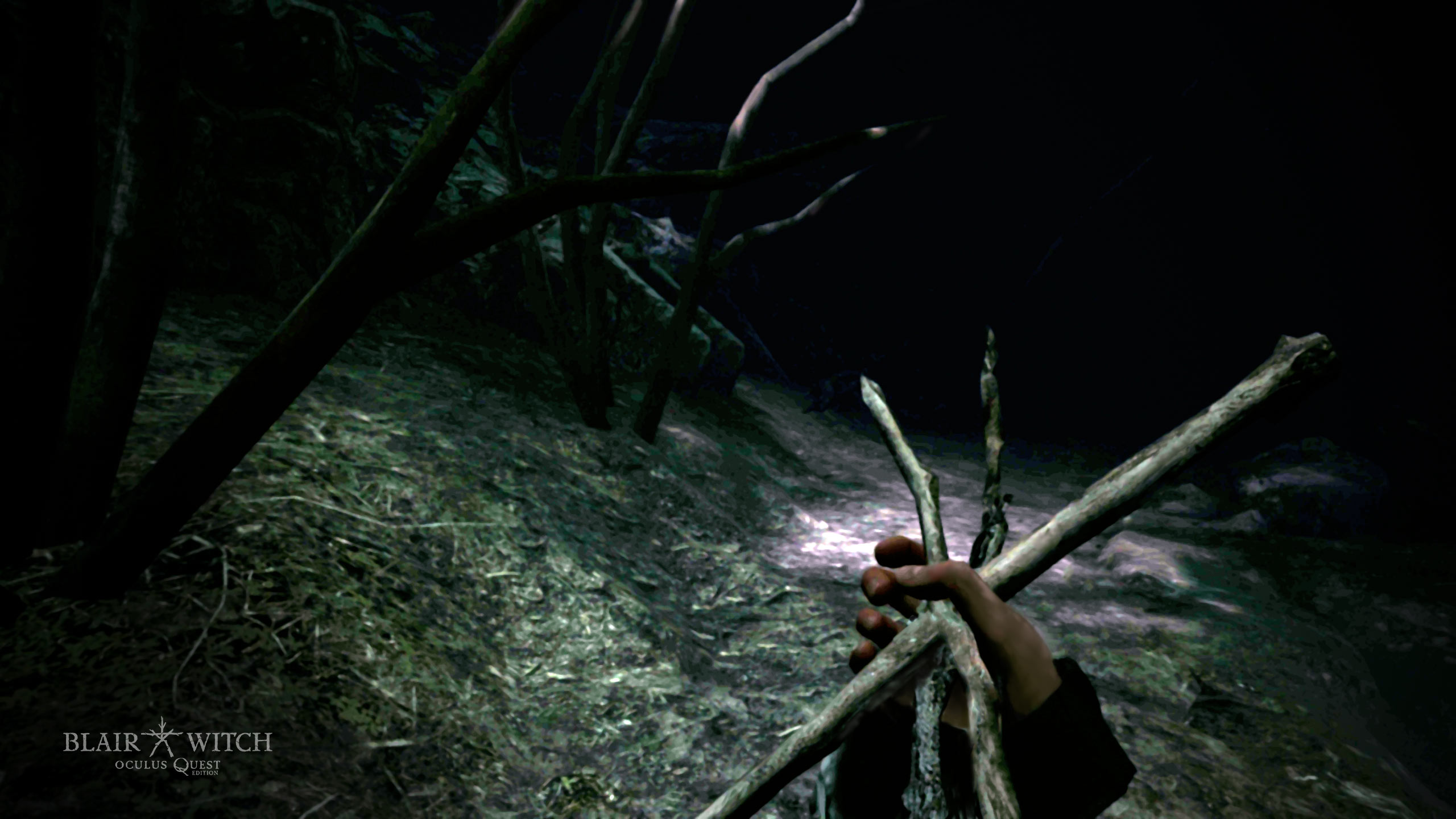 Bullet, as a partner, does the job, but the relationship between the two characters could have been somewhat more organic. At first, they explain that if Bullet is not around, we lose our sanity, but in reality, we will only lose it when the game wants. And, be careful; the dog’s integration works, and you end up becoming fond of it thanks to its constant presence. Still, in reality, it becomes a mere tool to find the way when the game considers it necessary or indicates the position of some key object or enemy.

Speaking of enemies, Blair Witch integrates a somewhat improved combat system. The idea is similar to Alan Wake’s, but the implementation is much worse. There are different types of “enemies,” some more traditional than others. For example, we have almost invisible creatures, which we have to detect by sound and by Bullet’s gestures, and which will disappear after being repeatedly illuminated by our flashlight. Still, we also have other harmful elements whose role is closer to an obstacle, like eddies of leaves that chase us in certain areas. 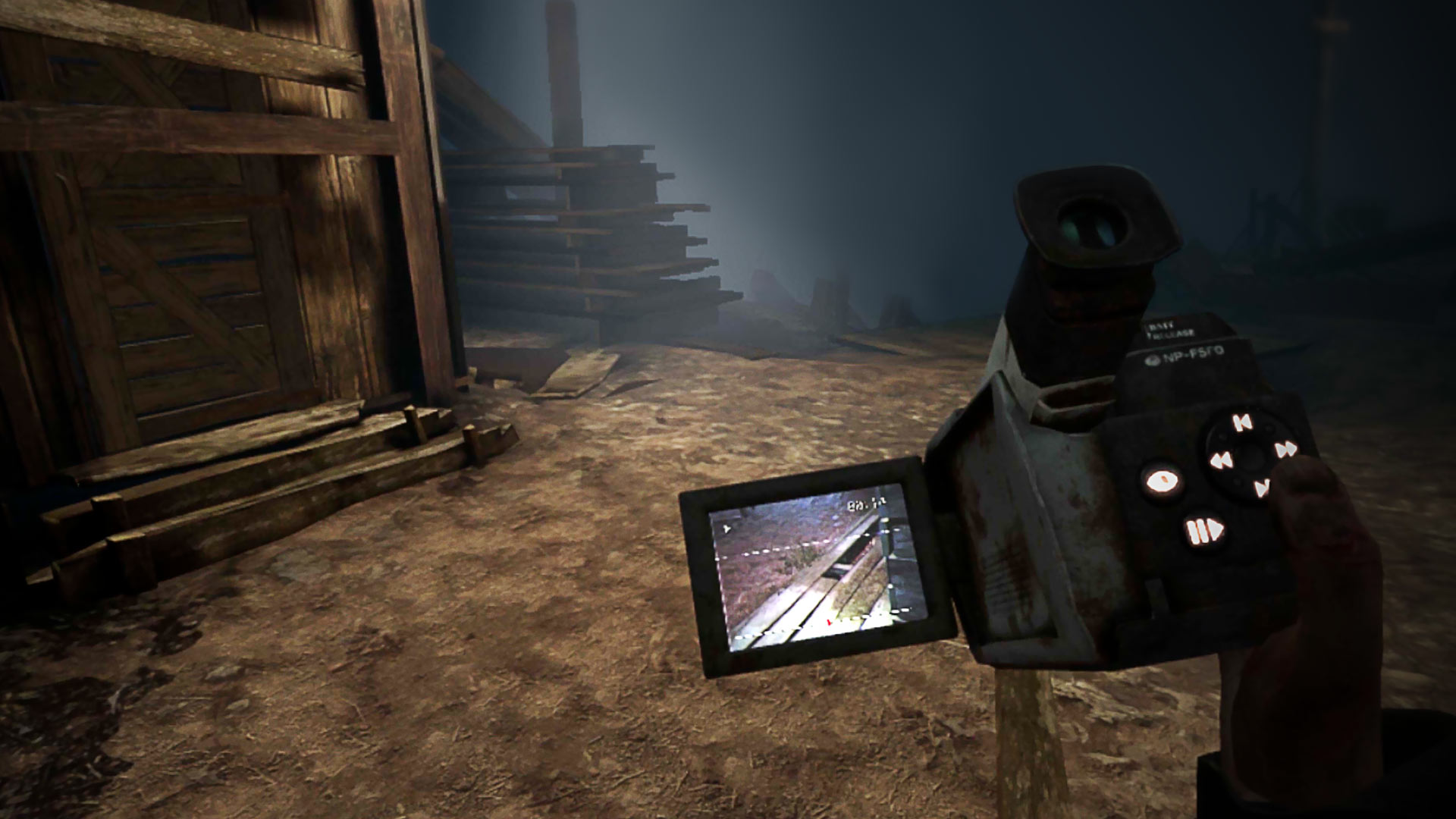 This, coupled with situations in which you have to flee, makes you never very clear how to face one of these enemies or obstacles, and you end up running without knowing very well what to do. Perhaps it is Bloober’s idea to create confusion and tension with these paranormal elements and for the player to react as helplessly as they would in real life; however, this causes some trial and error moments that are not usually good in the genre.

The last major playable mechanic in Blair Witch are puzzles. There are two types, but both are very, very simple. The first is based on finding some tapes that we can play on our video camera. These tapes modify reality, allowing us to make key objects appear or disappear to progress. If we have a recording in which a tree falls cutting the path, we can rewind it so that the tree returns to its place and pass. 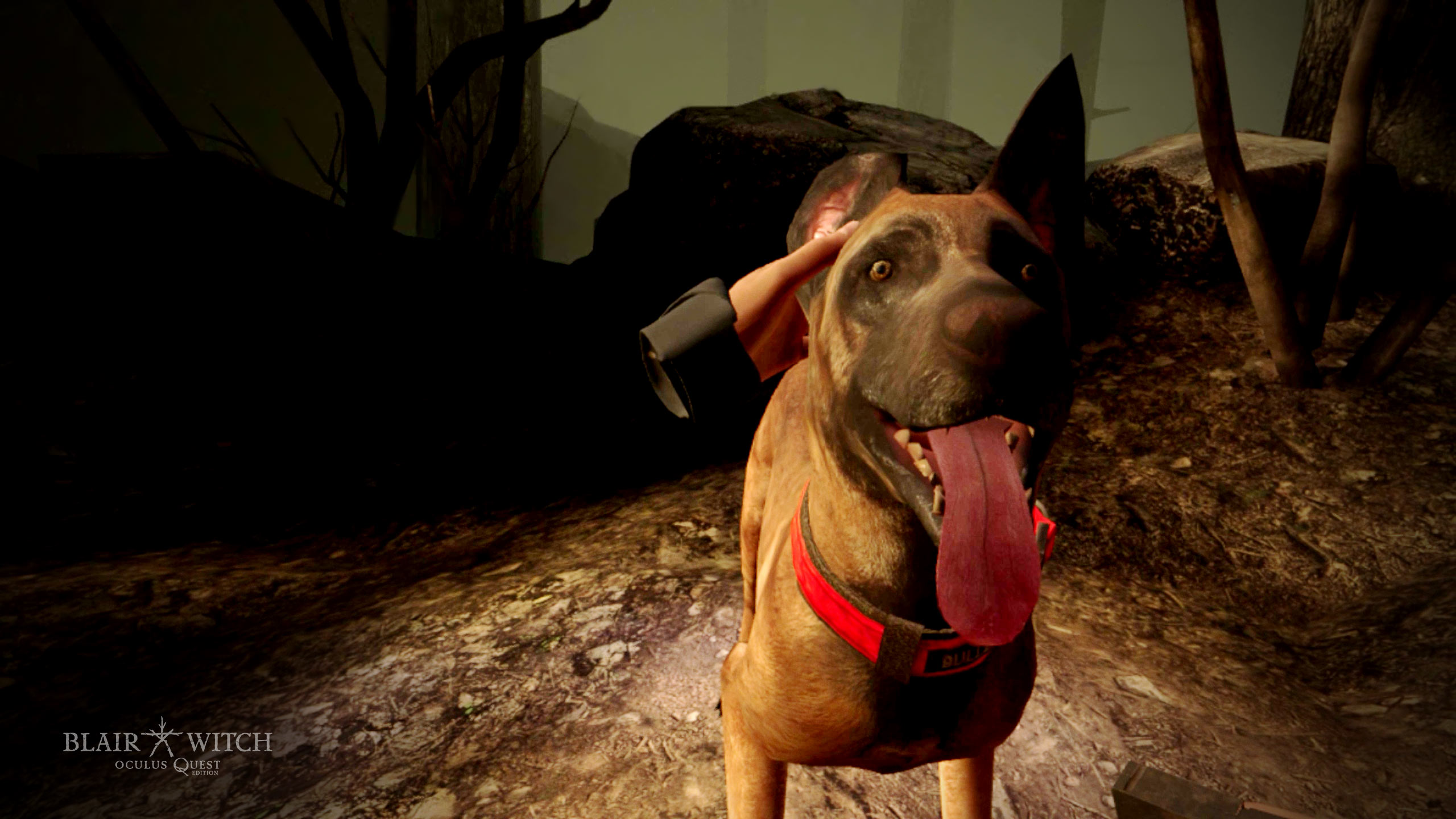 The second is somewhat more traditional and usually requires reading a document telling us where to put one object. Yes, there are somewhat more complex secondary puzzles, which we have to discover by exploring the setting. We can completely ignore puzzles, but we recommend doing if you want to make the most of the game.

Blair Witch is a game full of ups and downs in all its aspects. The story has great moments and quite improvable ones; there are scenarios with spectacular graphics and others that are much more mediocre. At the playable level, there are fantastic sequences that overshadow others that are much more normal. We do not know if this is because it has been artificially stretched (it lasts about five hours if we go for the story, more if we explore), but it ends up transmitting very irregular sensations. 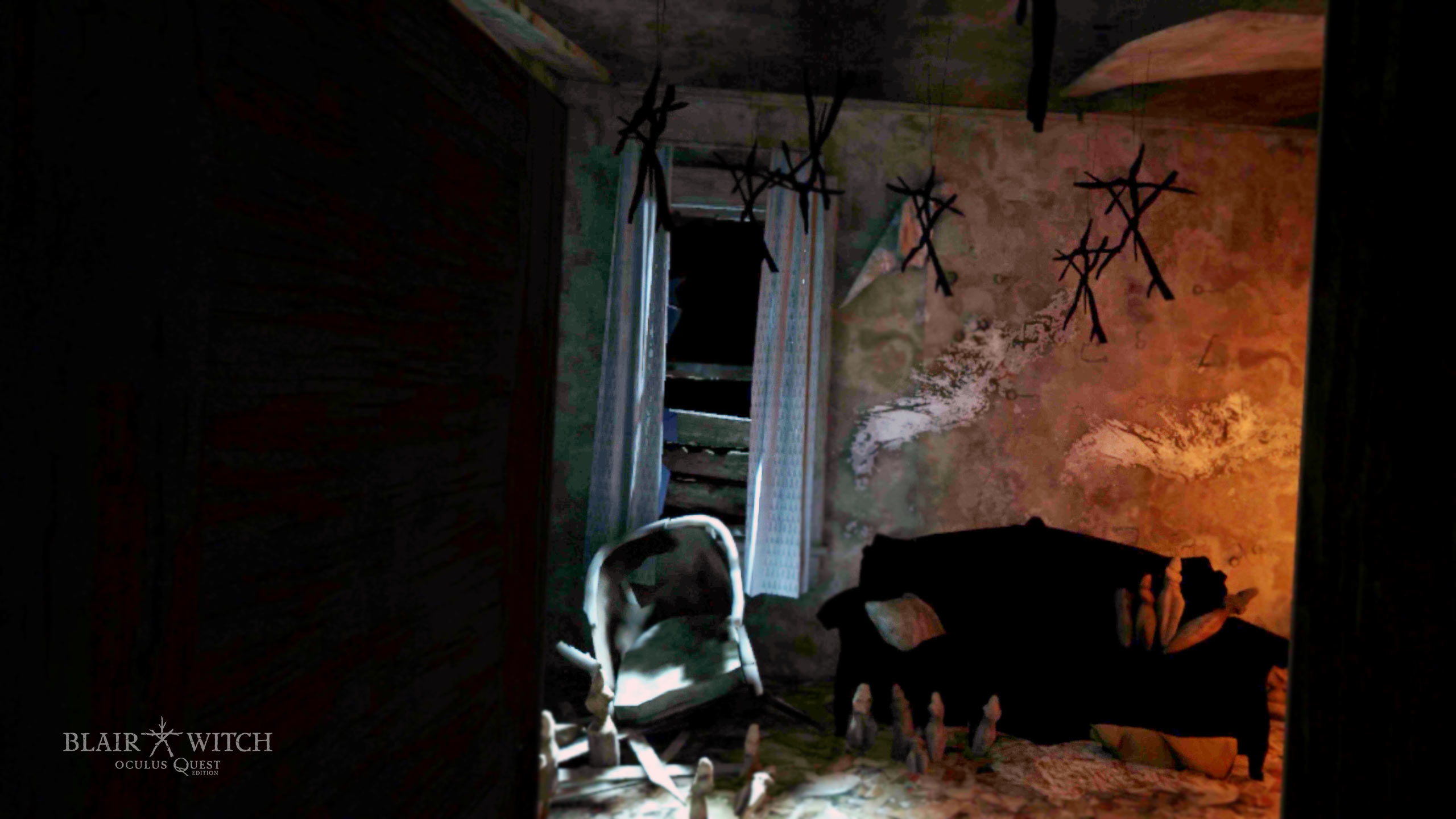 In fact, the final section looks like another game in which everything makes more sense at the design level. We do not rule out that it was the concept for Layers of Fear 3 because the narrative fits perfectly, and the license came later, leading to redesigning part of the adventure. Anyway, and even with these ups and downs, it is a very entertaining game. It takes a while to start, but once we are inside, it is delightful.

From an audiovisual point of view, the PS4 Pro version performs quite well. As we said, there are some brilliant moments in the graphics and others more forgettable, and beyond the occasional frame drops, it plays at 30 images per second. In terms of sound, the game makes use of binaural sound is fantastic, and it completely envelops us in action. By simply listening, we can perfectly locate where Bullet is, something quite useful, but, of course, this technology will also help us put voices in our head and give us the odd scare.

Blair Witch is a title full of lights and shadows, not only literally but also figuratively. There are great moments opposed to others that are very improvable and even a little tedious, and many quality highlights obscured. Although we would like Bloober Team to take a little more time (or give it a little more budget) to offer us a new title that takes full advantage of the talent that emerges from the studio. 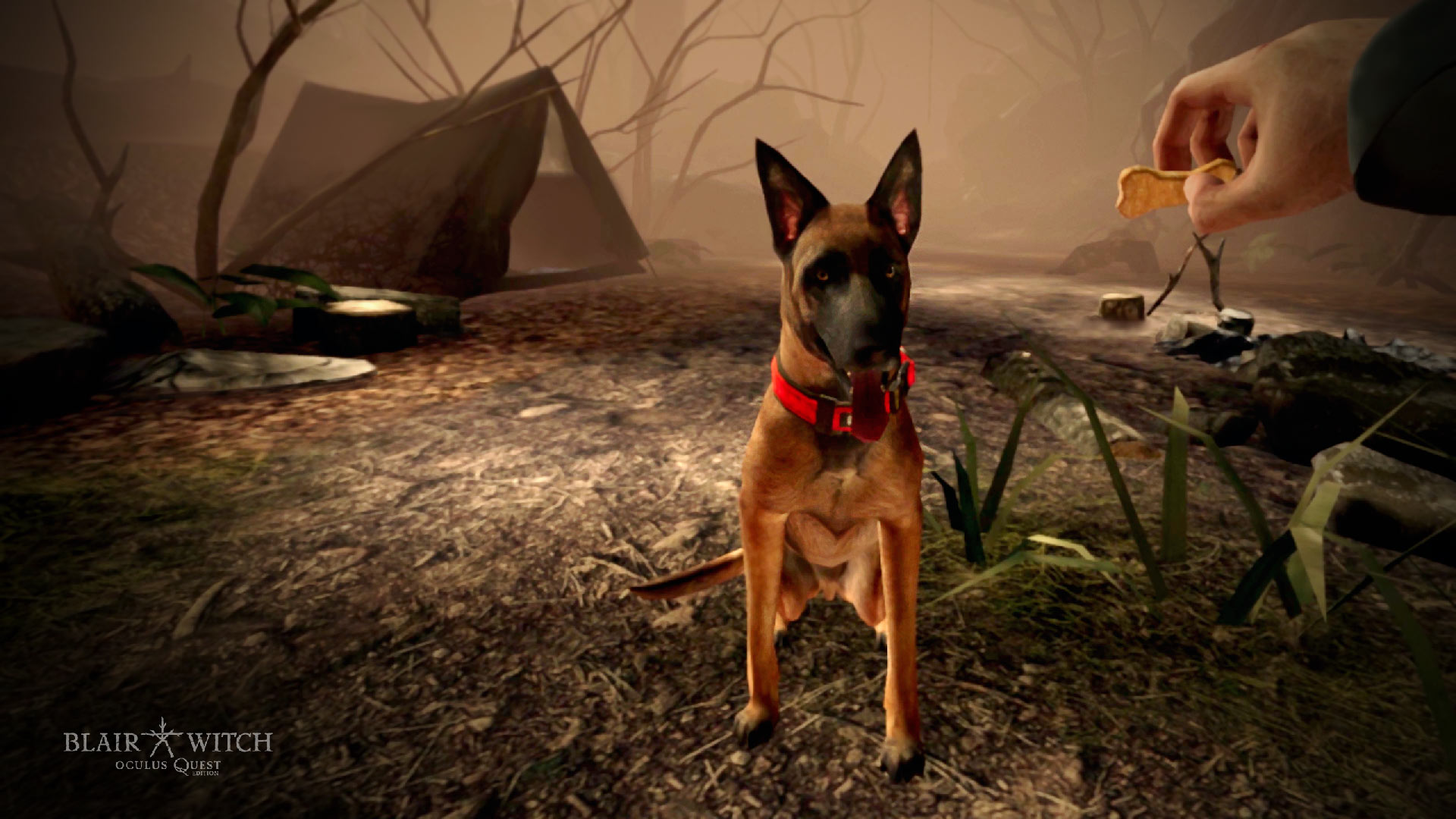 The vast majority of the game is just correct, but the final stretch is outstanding, leaving you with a fantastic taste in your mouth. In a way, it seems that the final chapter was the original idea of ​​the game, and the rest was made to lengthen it and fit it into the universe of The Blair Witch. In any case, we encourage you to give it a try; you will definitely enjoy it but make sure to keep spare pants on the side, playing this in VR is just intense.

We prepared this review with a digital copy for the PS4 version provided by Evolve PR.

Bleeding Edge has been developed by a group of 15 people in Ninja Theory
January 24, 2020
Average User Rating
0
0 votes
Rate
Submit
Your Rating
0