Playstation Aim Controller was launched together with Farpoint, the second game to use it also became quite popular, although not for the same reasons. The original Dick Wilde was an entertaining VR shooter, and it used the new peripheral for PSVR along with the classic PS Move controllers, offering crazy weapons to take down mutant animals. Despite the fun first title had one important problem: it was designed at very high difficulty. I am talking about like really really difficult so that almost nobody passed beyond the second world.

Luckily,  Bolverk Games and  Playstack London have taken all the feedback from gamers to offer  Dick Wilde 2 as a bigger sequel, and above all, fairer for all types of players. They have also changed from a static shooter to rails, cooperative added between PC and PS4, and added a more adjusted difficulty. Will these improvements be enough so that now we can all enjoy the killing of mutant and dangerous animals by the rivers of the USA?


The premise is very, very basic in  Dick Wilde 2 since we are a few eccentric ecologists who go to clean the rivers of the mutants that have appeared, using for it all the weapons at their disposal while they travel by a raft down the river. From time to time Dick will release some funny words in the intermediate points of the levels or the main menu, but little more, and the truth, those phrases end up becoming something repetitive, ending in the end quite fed up with “It’s me, a Dick ” as a reference to  Super Mario Bros . A little more variety in the dialogues would not have hurt, of course.

But here we are to hit shots, and that’s where  Dick Wilde 2 manages to shine. As we mentioned before, we are not facing a static VR shooter, but this sequel is an on-rails shooter, a genre that we personally love. This allows us to move around the scenes, so there is more dynamism in the phases, and the appearance of both hazards and enemies follows a much more logical and pleasant rhythm. 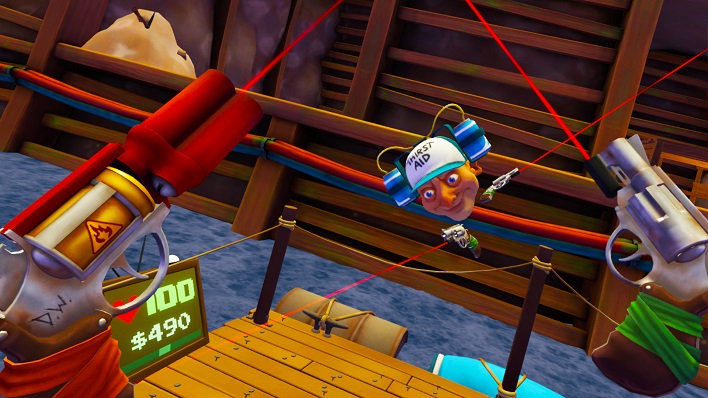 In Dick Wilde 2 we have to worry about all the mutant animals that will appear to kill us, like piranhas, birds that launch torpedoes, raccoons that launch energy balls or beavers that have also achieved powers to shoot projectiles. On the map, there will be rubbish in the stream, and if we do not destroy it, it will damage the raft, or there will even be enemies (crabs) that will not attack us, but they will attack our raft, so this new type of enemies and challenges widens the chances of being smashed to pieces

Luckily, the difficulty of  Dick Wilde 2 is infinitely better measured than in the original, allowing us to enjoy a tight, but acceptable and fun challenge. Everything starts quite simply in the first levels so that we get used to the different types of enemies and the main mechanics. In essence, by destroying the trash we will get money, which we can use at intermediate points to buy new weapons or power-ups, such as a higher probability of launching critical shots or increasing health. This makes us want to always fix on destroying the garbage, although it will not harm us since a few dollars more can make a difference when buying a more powerful weapon. On the other hand, when we finish the enemies it will fill a bar,

To progress, in the levels, we will have to charge the golden fish (which in the original only gave us extra points), since they contain golden keys. The funny thing is that there is a specific number of keys per phase, and in each intermediate zone we can choose which route to follow. Depending on the direction taken, the level will change and will give us access to one key or another, so to get all of one level, we will have to replay it several times. This greatly increases the replay of  Dick Wilde 2, because, in addition to having many levels, there are now many more reasons to return to them if we like to complete everything 100%. 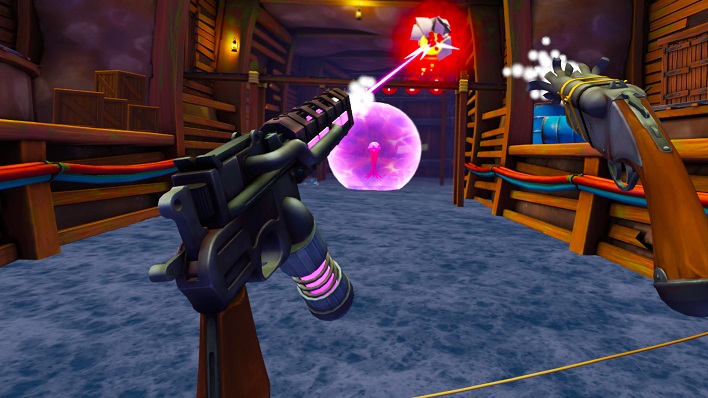 Another positive aspect of the design of the game is how we unlock the weapons. As standard, we will have the most basic revolvers and weapons of the submachine guns and the shotguns. All others are blocked, and to achieve them we will have to complete the challenge level of that particular weapon. This allows us to familiarize ourselves with that weapon to know if we like its style of game or not. These levels do not give keys, so if we see that we do not like a particular weapon, we can skip that phase and that’s it. The only thing we will lose is that, depending on the stars that we get, we will get an initial amount of money for successive levels within that world, something that can allow us to start from the beginning with a powerful weapon instead of the basic revolvers.

All this progress in a world allows us to learn and take enough skill to face the head of it. This time there are three different bosses in the game, one per world, and they are quite original. The first world is a giant beaver-shaped robot controlled by beavers, then move to a giant snake and a giant crab. These combats are quite fun and can be challenging if we are not careful. 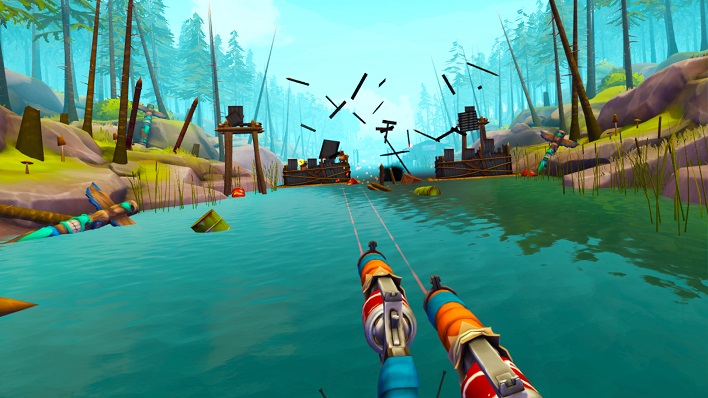 Because yes,  Dick Wilde 2 remains challenging outside the initial levels, forcing us to move a lot and to point very quickly to all the enemies and garbage that appear on the screen. Luckily, the difficulty curve allows us to enjoy the trip much more, something that I find fantastic. Maybe it would have been nice to make the intermediate points in the levels also serve as checkpoints for those who have more difficulties, but generally, it is an area that I am very happy within the game. This has made me have a great time dodging and shooting without stopping, but yes, play with plenty of space, do not go to hit a wall or some object … Not that it happened to me while preventing a piranha to eat my face, what’s up. Speaking of piranhas, I know that many have Farpoint phobia for the spider-shaped aliens that jump into your face,  because they give me goosebumps. Now, to burst them in a thousand pieces is as satisfying and somewhat therapeutic, with one thing for another.

If we still have problems with the difficulty, we can play cooperatively, having cross-play between PS4 and PC. And it’s fun to play with a friend. Unfortunately, there are several problems with this cooperative. On the one hand, the matchmaking is already quite empty, so unless you meet someone, in particular, it will cost to enter a match. On the other hand, the difficulty is greatly reduced, since the number of enemies is more or less the same, but now some jump to a player and others attack the second user, which makes everything too easy for my liking. That’s why I recommend playing  Dick Wilde 2in individual until they balance this mode a little more. It also clashes that there is no voice chat within the game, that if we play with a PS4 user, without problems, to be able to create a party from the console, but if it is a PC user, the communication options are reduced to zero. 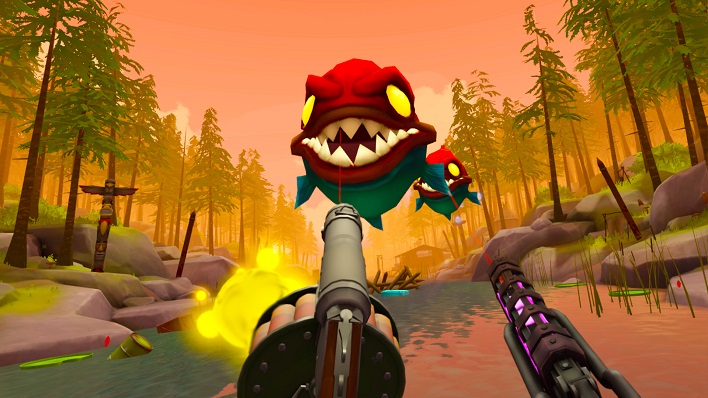 Another “problem” is that in this sequel, the weapons have seemed less original to us. In essence, we have 16 weapons divided into four categories: revolvers, submachine guns, shotguns and energy weapons. If we play with the Aim Controller, these weapons happen to have more rifle shape and some power increases to balance them better, but they all work the same regardless of whether we use the Move or the Aim. They are not so original or crazy, beyond a gracious design, but little else.

Within the visual,  Dick Wilde 2 offers simple cartoon style graphics, but that allows you to enjoy a very sharp image in PSVR. The main drawback in the graphics is that the three themes of the scenarios become somewhat repetitive after a while, despite small variations, with which for the future, more visual aspects for the levels would not be bad. With that being said, everything looks pretty good, and those piranhas that jump to your face manage to freak you!

The sound is also at a good level, thanks to some sound effects that allow us to identify which side of the barge the enemies will appear on, and some good sounds for the weapons. The melodies with the banjo manage to give personality to the game, and encourage us to shoot the air every time we complete a level releasing a good “yeeehaaaa”!

Dick Wilde 2 is a great example of how to take the good part of an entertaining first part but failed in several aspects, to offer a greater and more fun game in all its facets. Yes, we e 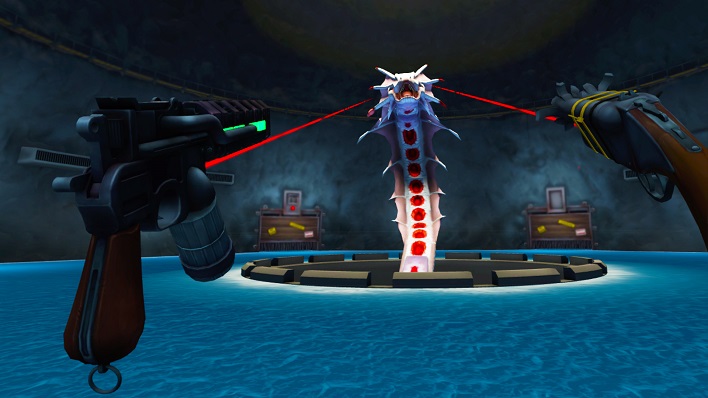 njoyed the original despite its impossible difficulty and may be missed by several users, but what this sequel offers seems much more accurate to give all kinds of users a fun and complete rails shooter.

Is it something super original or is it going to drive us crazy in Virtual Reality? Not at all, but for those of us who love track shooters, we are faced with a proposal that makes us move without stopping while dodging the damn piranhas and bursting them with various weapons, before facing the absurd but fun final bosses. Although there are certain aspects that could be balanced in future patches (the difficulty of the cooperative or a greater visual variety of the scenarios), to little that you like to shoot shots in Virtual Reality,  Dick Wilde 2 is going to offer you a lot of fun to the rhythm of banjo , because sometimes shooting like an American hustler without more pretensions than having a good time is more than enough.