Forza Horizon 3 improves in quality and offers one of the best and most complete racing experience.

Forza Horizon 3 is finally here and Forza franchise is one of the best car racing games of the last decade. Horizon 3 is also an open world racing game, almost identical to the first two Forza Horizon, but with an improvement in quality on each and every aspects. Playground Games developed the most complete and amazing racing simulator up to date.

Whether it’s a movie or game, sequels tend to have negative connotations, but Forza Horizon 3 is one of those titles that proves to be a sequel is not necessarily bad since it improves the overall quality so that the experience does not suffer. In this third installment, Playground Games brings a complete racing experience and all the goods accumulated from the previous installments, so the Forza Horizon 3 can be described with these words; largest, full, varied, spectacular and fun. Surpasses everything in Forza Horizon 2 : quantity and quality of content (with more than 350 cars ), in a world open twice as large, much more detailed, beautiful and alive , in the variety of tests, missions and collectibles, and in terms of possibilities, with interesting new features like being able to create our own events , or to play the campaign cooperatively form a team of up to four players. And the flawless gameplay remains, which can be adapted to all types of players.

Forza Horizon 3 takes place in Australia, a great decision that includes all types of racing and driving events, each more spectacular. From the usual series, competitions with sports cars on highways, towns, winding roads and dirt roads and all kinds of evidence by nature, running through forests, deserts, and beaches, with rally cars, 4×4 or one of the new features of this title, the buggies. Australia as a racing arena provides both playable and visual variety, makes a spectacularly beautiful game, Forza Horizon 3 has a  change in its structure: now we are not only participant in this festival who race cars and mixes music, but we are also the boss, and therefore our goals are slightly different.

We continue earning credits to upgrade and buy new cars, and experience points to level up and unlock new abilities and rewards, but now our most important goal is to get fans. Each time you reach a certain number of fans, the festival expands to one of the four available areas. And unlocks a whole series of tests and challenges around.

Horizon 3 is full of races and championships, but also side events, such as life experiences, radars and speed zones, and some new evidence, such as areas of skidding and dangerous jumps. Soon discover that overcoming these tests also got a large number of fans, not just winning races, so we have a more open and free than the previous installments structure, and when progress and achieve the ultimate goal, we can choose our own way freely. And not just because we always have a huge amount of testing and races to choose from, but also because this time we can edit events, changing their rules, so the game will always adapt to our tastes. For example can play for hours alone with sports cars, with 4X4 vehicles or rally, and if there is a type of driving that we do not like, we can neglect it and choose another, and continue to progress in the game without any problem. 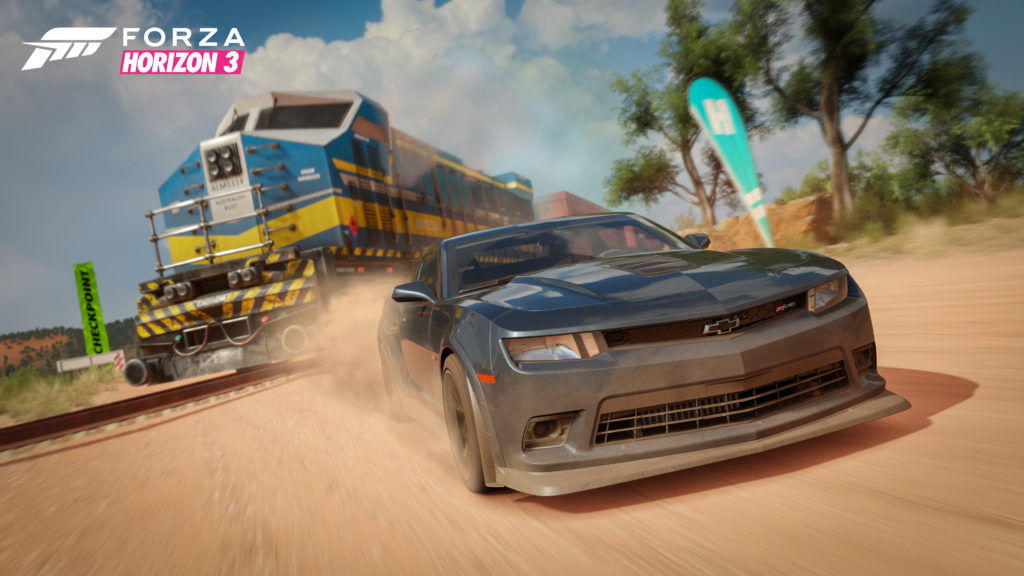 Taking as a starting point any of the races, we can create our own event, picking the type of cars we want to compete, the number of laps, the time of day and weather. Of course, you can not choose the path, it is always starting a career or already designed circuit. These designs also can share the Internet with other players, so now every time we go to compete in a race, we can choose the default settings, or choose one of the many designs that created the gaming community. We can also design championships whole, choosing the tests we want to be part of, and their conditions.

And what is even more interesting, we can design our own life experiences, such as dramatic evidence introduced Forza Horizon 2, they put us in a car to reach a very specific goal. This option is even more flexible than creating events and championships, and can choose from eight types of life experiences (speed cameras, scoring ability, set route, dangerous jumps, route of skill, mastery of skill, area of skidding, damage control), the car with which we have to play, time of day, the weather, if we want traffic or not, force play with a particular camera, enable or rewinds, and can also select the song we want to sound during the test, to choose in the extensive soundtrack.

As directors of the festival, also we can recruit Drivatar to mount a gang and lead forming a caravan, allowing us to travel with other cars discovering the different roads huge map, can activate a race at any time. The collectibles like posters that give us experience points and abandoned cars are maintained, and also the great possibilities of customization of cars, both mechanical and visual, as well as driving aids and the difficulty of rivals by offering a set of very flexible, cars suitable for any type of player.

And the catalog of vehicles is impressive, with more than 350 cars (150 more than had Forza Horizon 2 at launch), which not only many but they are also selected with exquisite taste, with many brands, times and styles, so it’s hard not to go to find you some of your fetish cars. Of course still, the option to download the designs of the community to customize vehicles, which make true works of art.

The possibilities online are also very complete and can play races with up to 12 players explore the open world in the company, and as we said before, play the campaign in co – op with friends. Returns clubs, with which you can create a community of racers and compete against the rest, and bookmarks online, all races, events, and milestones that become one of the great incentives to bite you with your contact Xbox Live.

As if there were not enough content in the base game, for dozens of hours in October arrive events Forzathon, a series of weekly challenges where you can win unique prizes, and encourage us to continue hooked to the game for months.

Rarely have we seen such a game that gives users the freedom to play as you want without that experience will suffer, em a master class design and good work by Playground Games.They say the map is twice as large compared to Forza Horizon 2 , but the size is not important, but how well designed it is, and we can cross it from end to end, either by road or field, and never find barriers or obstacles that prevent us from doing so, we note that is a true next -generation open world. 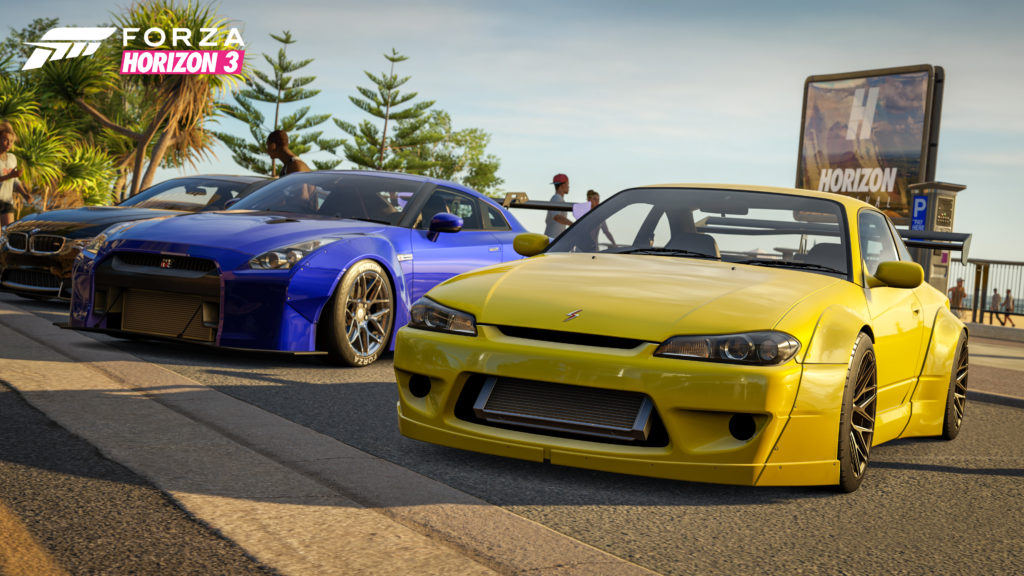 Apart from its beauty and variety of landscapes, something that could be praising for hours, the world of Forza Horizon 3 is denser, feels more alive and full of elements, and their roads are better designed. We will not realize it until we start to run all kinds of tests and check that those same roads we travel to get from one place to another, are perfectly suited to the competition, with a particular test very spectacular, over 10 minutes, that make us go from one end to another to the map, admiring its design and appearance.

Driving and move around the world of Forza Horizon 3 is a pleasure, and makes you forget about the quick trip, and either objectives or secondary searches, the beauty of the landscapes, the great soundtrack, or for the simple pleasure that gives drive vehicles each with its own personality and character. Never get tired of getting around Australia, and have fun alike both in and out of competition, which is quite an achievement.

And closely related to everything that we have said above is its graphics, possibly the best we’ve seen visually on an Xbox One. For his tremendous strength, as almost never compromised 30fps, by the absence of graphic defects, for a full scenarios details, some modeled to perfection cars, lighting can leave you with your mouth open more than one occasion, and very achieved climatic effects, with different types of rain, happening very naturally of a few drops a heavy rain, and vice versa, affecting the state of asphalt and roads.

Lots of colors and blue skies, as they should be good games arcade driving, and the technical and the artistic shake hands constantly to offer one of the most beautiful and impressive games of the current generation of consoles. They have set the bar high for a possible Forza Horizon 4, and we can’t wait to see what secrets they will revealing for the next installment to surprise us.

The sound is also up, and the cars roar as they should, forceful and varied, and the squeak of the wheels on the asphalt and other sound effects. All blended perfectly with the rich and varied soundtrack, which offers more than 150 songs , with such diverse artists as Albert Hammond Jr, Bombay Bicycle Club, Bad Religion, the Offspring, Chvrches, Cut Copy, Justice, M83, Digitalism, Skillrex, Beastie Boys and Run-DMC, and even classics of classical music. The ability to listen to our own music through Microsoft Groove, a station enabled to this end, a music service streaming we can try thanks to a 14 – day pass that included in the game.

The first two Forza Horizons were good, but with this third installment Playground Games has perfected the formula to the absolute limits and reached the heaven of arcade driving. A game that offers hours and hours of fun high quality, and an example of how the open world games should be made: A “sandbox” in which you feel totally free and even overwhelmed with so many possibilities, while fun at every second. If you’ve ever enjoyed the arcade driving, Forza Horizon 3 is a game essential for racing fans and claimed as one of the most important genres in the history of video games.

Controversy over possible theft of visual resources in the No More Heroes 3 trailer
December 15, 2019