Enjoyed playing Rollcage back in the days? Then you have to play GRIP!

In the 90s, it was lived, especially by the explosion of 3D, a golden age for the racing genre. Arcade games, simulators, and many experiments that moved away from simple pure speed thanks to the introduction of weapons. Apart from Wipeout, Psygnosys developed another lesser-known futuristic racing saga in the 32-bit PlayStation: Rollcage in 1999. A year later it received a sequel, but public interest – and the full transition of consoles – buried the games definitely.

Now comes Grip: Combat Racing, a spiritual sequel developed by the studio Caged Element Inc., and like other independent projects that are inspired by classic games, seeks to maintain a balance between the original gameplay, add their own improvements and update the classic section. Grip has good additions and it plays nicely in several aspects, but it is somewhat lacking in most areas.


What differentiates Rollcage and therefore Grip from other titles that promise us to go at absurd speeds? Well, this time we control vehicles with four large wheels, not ships that float, and therefore their control is more conventional. Neither is a game of cars to use, because we have a great grip to brake with precision, and it is not about skidding as if it were a Ridge Racer. Grip imitates pretty well the peculiar physics of Rollcage, perhaps with more weight in the vehicles, so feeling when running is very satisfying.

However, these games stood out for another curiosity: their ability to run on walls and ceilings, provided they have enough speed. Most circuits have long tunnels or steep slopes that will put us even backwards, and thanks to the bulky tires, it does not matter to fall on your back. We will give more than one turn of the bell and the worst thing that can happen to us is to fall in the opposite direction. 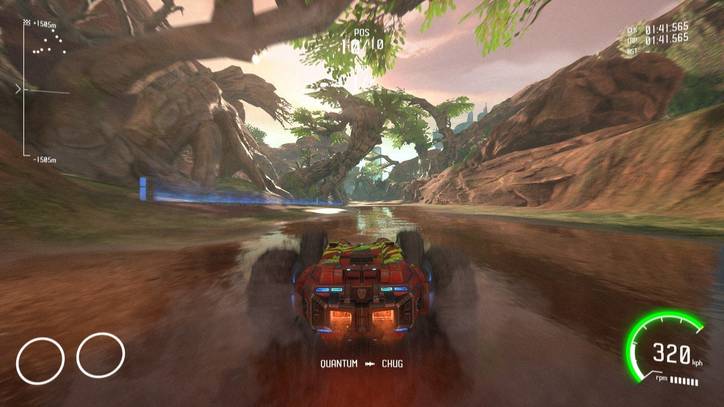 Grip manages to maintain the atmosphere of dirty and chaotic races of Rollcage, a much more pronounced aspect than in Wipeout or F-Zero, something that has its pros and cons. Added to this are speed panels and power-ups, a series of offensive, defensive and helpful objects: missiles of various types, protective shields or turbo. We can accumulate several and perhaps decant a race that we gave for lost – or instead, lose just at the last minute. Artificial intelligence is quite aggressive so it is good to make a few mistakes almost from the beginning.

We also have the usual selection of vehicles to choose from, each with different parameters in speed, control or acceleration. Most are blocked at the start and it will be necessary to level up – get experience in careers – to access them. There is a fairly basic editor to configure colours, pre-defined vinyl or tires, which at least will make us different from other players during online games. 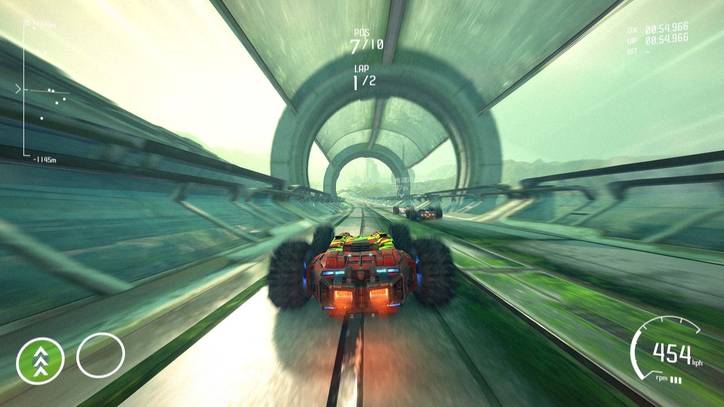 Speaking of ways, Grip includes a campaign consisting of the typical tournaments of increasing difficulty, a single player mode -select track, type of race, number of competitors and other parameters- to practice and memorize the route. There is local multiplayer for four users and online. As for the rules of the race, we find three categories: race, sand and parkour. The first category includes speed-oriented modes, such as classic race -with weapons-, definitive race -with points for destroying enemies-, elimination race -every 30 seconds loses the last-, infernal speed -without weapons- and time trial.

The arena consists of modes more focused on action and weapons, and does not always win the fastest: game to death – bumpers, steal the stash – similar to steal the flag -, and time bomb – the expansive waves convert the vehicles in mobile pumps. Parkours are special tracks to put into practice our precision at the wheel.

We could say that Grip complies with all the points that could be expected from a modern revision of Rollcage: very similar gameplay, multiplayer and a campaign that ensures many hours of racing. These

ingredients depend on another aspect to take into account, and it is the one that seemed to cloud the experience a bit: the circuits.

We have more than 20 tracks set in four thematic planets, and their quality varies a lot, both in design and in purely graphic aspects. On the positive side, we see that most have bifurcations or shortcuts, there are ramps for spectacular jumps and tend to favour competition by climbing walls -for the placement of power-ups, for example; The most linear circuits are good in general, but in the negative, there are tracks with many lethal drops, such as those that occur in urban settings, where the limits of the stage are not well signalled.

In a game at high speeds where rebounding and climbing walls are common -and often directly lose control-, it is uncomfortable to see so many unprotected areas near places where control or the impulse of vertical races is easily lost. It cuts the rhythm, and although it forces to be more careful -in short, better players- it does not fit well with a philosophy that invites chaos. 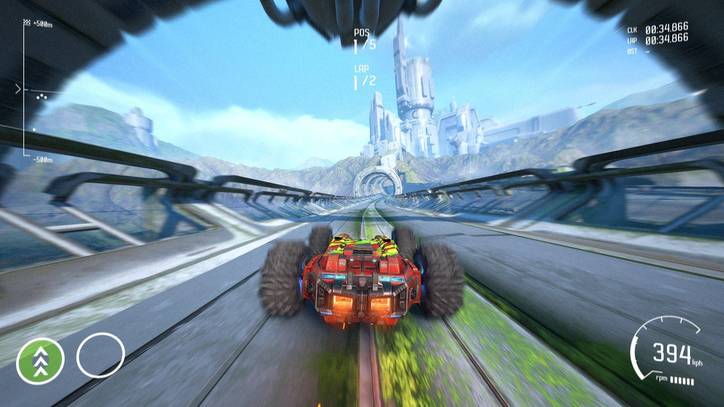 Other circuits usually have large open areas, for example, those with post-apocalyptic themes in deserts. There are confusing sections, where it is difficult to know the correct direction or even enter prohibited areas with the consequent destruction of your vehicle. They are not very fun sections for speed competition, much less for combat – players are more dispersed in their width.

In short, we would say that the Grip tracks are the weakest aspect of the game and where the inexperience of the developer team is most noticeable. This is a major problem when we talk about a game of this type, and although when the best conditions are given it is a very fun, fast and spectacular game, it is also capable of falling into boring competition, too unpredictable and with pauses that hinder the race – there are many obstacles in the decoration so as not to collide with them, or get bounced out of bounds. 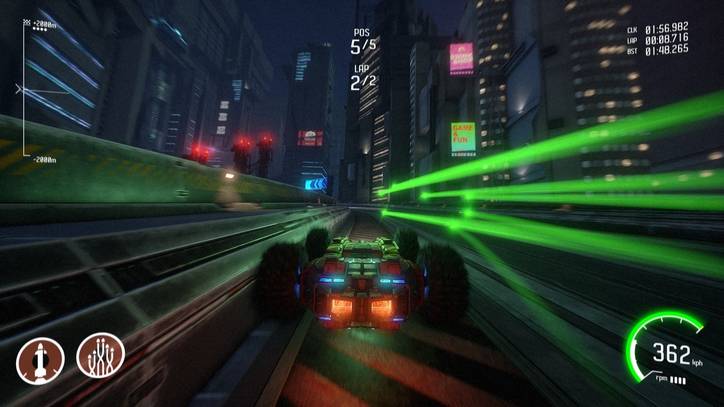 This irregular quality also has its reflection in the artistic aspect. The natural scenarios with vegetation are the most striking, but it falls into monotony in the dirtiest, futuristic and rusty environments of other tracks. And it lacks an inspiration in the architecture, games of lights or colours that give more charm to the game. The music is also aimed at this quality with ups and downs: there is completely generic Drum n Bass, but some electronic theme raises the level. At least on PC, there is the option to use our own playlist. 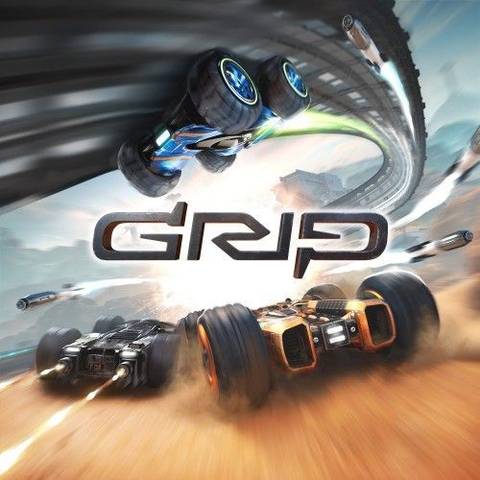 Grip: Combat Racing feels half done. As a tribute, it is a good reminder of what Rollcage was, and the truth is that it is still quite fresh. If there are not many arcades of speed, much less the titles of this type that allow us to run at full speed through the roof of the tunnels and eliminate the rivals. Of course, it takes some time to get used to some vehicles, with a tendency to go around – and sometimes fall in the opposite direction.

Aside from GRIP not having its own personality, the design of many circuits is a bit clumsy and does not always favour the strong points of the game. We’ve seen better games that tributes to Psygnosys’ Rollcage and although Grip becomes frantic and fun,  it suffers some visible problems in its gameplay.

We have made this review with a PS4 code given us by Wired Productions.