The studio behind the successful Goat Simulator try to replicate a similar formula by changing the animal into older people.

Just Die Already is a crazy open-world video game in which you control older people, a small title that could have gone unnoticed if it were not for the fact that the designers of Goat Simulator developed the same formula. DoubleMoose, an independent Swedish studio led by Armin Ibrisagic, game designer at Goat Simulator, has tried to replicate the formula of the game of the goat changing it for older people but keeping the rest of the characteristics practically identical.

What you will find in this title is a grotesque sandbox in which you will be able to control an older person to choose between four characters. However, it is only an aesthetic decision because nothing is modified playable: the Just Die Already map is completely open once you overcome the initial tutorial. We can explore it as we want, interacting with the objects, vehicles and people that you find on the streets of this dangerous city. The grace of this game lies in the fact that practically everything on the stage can kill us, from anti-personnel mines to fish tanks of electric eels. However, the grandfathers you handle are quite resistant and can continue walking even if they have lost practically all their limbs.

We begin our adventure in a precarious residence from which we have to flee, something that will serve as a kind of tutorial to get hold of the controls and mechanics of the game: you can grab things, hit with certain objects, become rag dolls and roll… All these actions are carried out with a somewhat rough execution, typical of physics-based games in which somewhat absurd situations sometimes occur that can frustrate or make us laugh depending on the context. Just Die Already has a solution designed for moments of traffic jam: with the push of a button, you will return to a nearby checkpoint that will restart our physical form, allowing us to return to the arena in one piece. 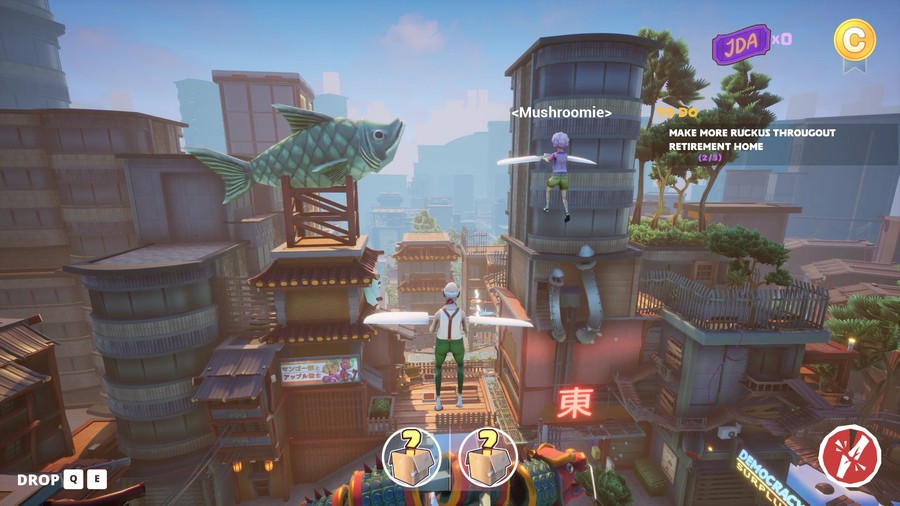 And it is that one of the main claims of this video game is that the characters can be dismembered in surreal ways so that sometimes you will not control a complete person, but simply a torso or ahead. In most cases, our elderly end up with their legs or arms severed, or they can even lose their entire trunk. Nothing happens; As long as the life indicator doesn’t run out, our character won’t be completely dead, and the game over screen won’t appear, so you can continue playing in the form of a bloody meatball. 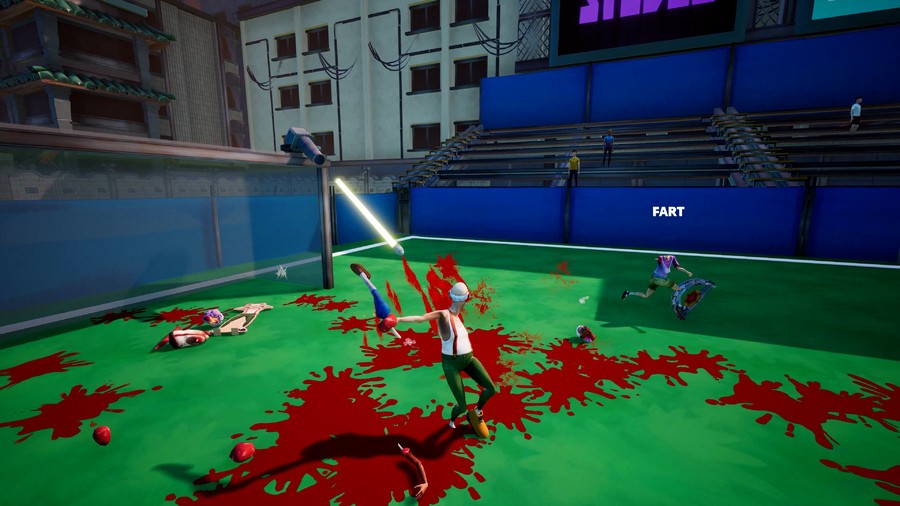 The representation of this dismemberment is quite grotesque, but not for the better: Die Already moves in a strange aesthetic where the cute and cartoonish is combined with gore, so there is no real sense of horror before what you see (the blood, explosions or beheadings are not realistic), but it is somewhat unpleasant to see how all these tragedies happen to what are ultimately older people. The authors have wanted to give this work a kind of hooligan humour that does not end up curdling well and remains a coarse adolescent comedy that, perhaps, an audience interested in this can find on streaming platforms. Completely outdated tawdry humour. In this sense, Goat Simulator understood physical and absurd comedy much better, and it did so without the need to blow the goat up in the air or show its head rolling on the ground while you could control it. 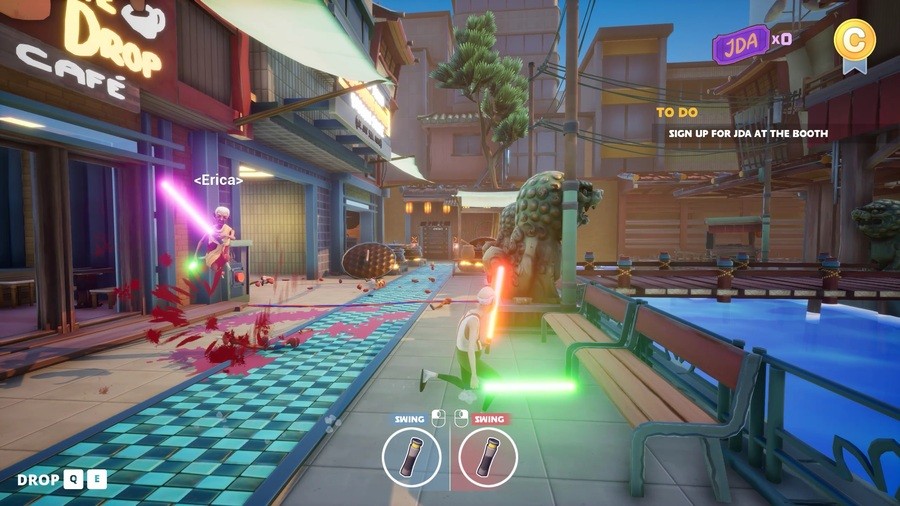 In addition, the graphic section of this game leaves much to be desired. The drawing distance is very short, and there are a few other graphical problems besides the low quality there are many bugs that make it difficult to have a smooth experience.

Although you can explore the city of Just Die Already with total freedom, the game offers us a series of objectives marked in a diary that serves as a guide and guideline so as not to end up lost in the middle of the stage without knowing what to do. Just like in Goat Simulator, here there are a huge number of secrets that are hidden in the most unexpected corners of the city: only by letting ourselves be carried away by madness will be able to discover new forms of movement that will allow us to access these secret places, something that It adds a touch of interest to the game. For example, there are narrow places that you can only reach by being a torso., so before accessing them, we will have to lose our limbs and our heads, for example. 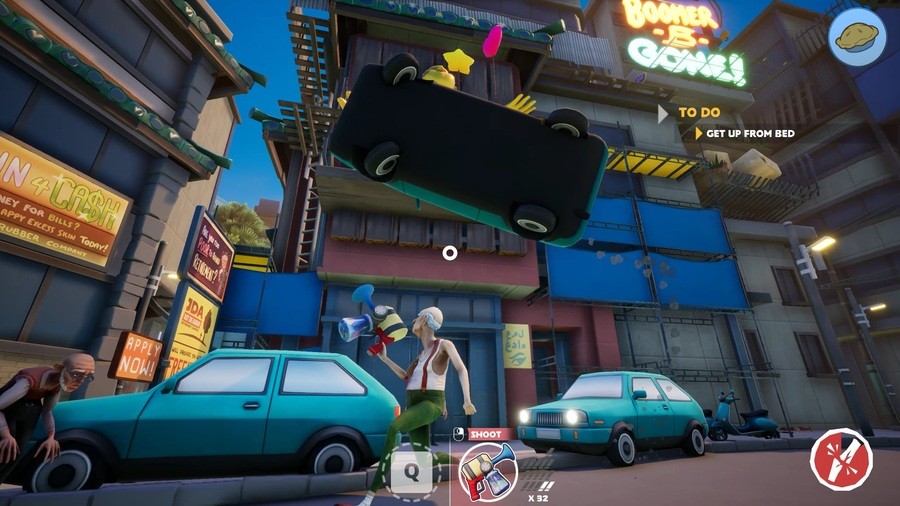 The best thing about this game is how it allows us to discover new corners of the stage thanks to its level design that does not invent anything but gives the occasional interesting situation that keeps the flame of curiosity alive. Being able to interact with practically everything is also worth mentioning about Just Die Already, especially for that sandbox aspect taken to the extreme that allows us to get creative with the objects that we find out there. The pity is that not all of them work as well as they should. The physics are not as well simulated as a game of this style might require: there is freedom for us to do what we want, although, on more than one occasion, the technical limitations of the game serve as a buffer to carry out the crazy things that were promised to us at the beginning. 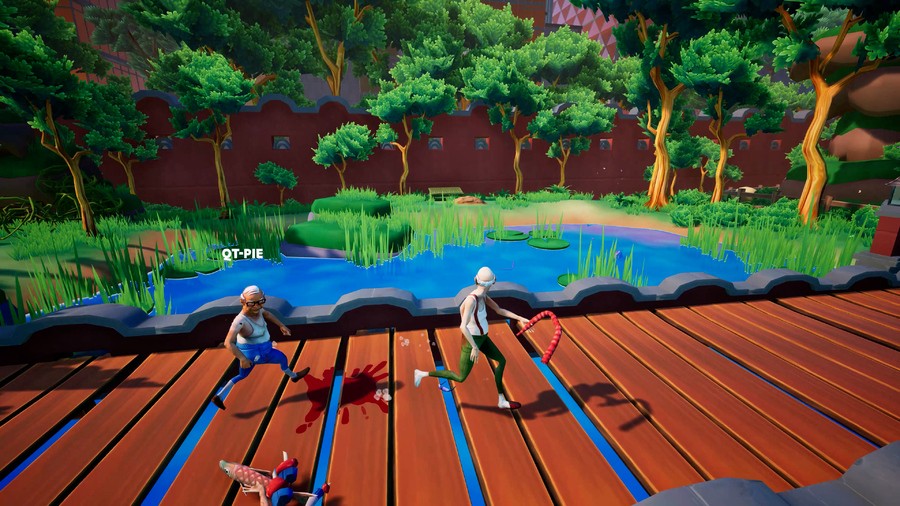 The balance of the virtues and defects of Just Die Already leans in general towards the negative side. Still, it does so, even more, when we decide on the cooperative multiplayer mode that the title has: today it is practically impossible to find a game in which to try this online game format for up to four players, or at least it is challenging if you do not have other friends who also have the game to be able to create a joint room. When we have tried to create a public game, after a long wait no one has joined to our room. However, they have always been driven by chaos, which has practically made coordination with the other players impossible. In addition, the game’s performance is highly compromised in its online mode, even when there is no player in the game. In my opinion, that it doesn’t have a local co-op is a big missed opportunity, it could have been much fun to do crazy things against another player, but it is tedious and unfeasible to play with strangers. 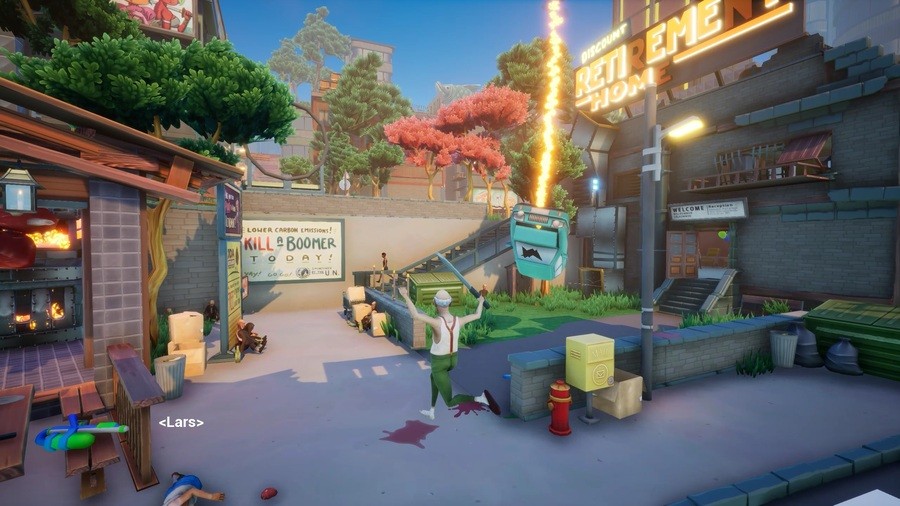 Just Die Already takes inspiration from Goat Simulator by taking some of its best aspects, such as free exploration riddled with secrets and wacky physical humour, but failing to understand the virtues of that unique and successful video game. The comedy of this title is much more vulgar than that of the goat game, in part because it changes the animal for older people whom, moreover, it does not hesitate to mutilate; in fact, it makes this action the main mechanic that helps us to access secret areas, forcing us to damage our character even if you don’t want to. If the coarse humour in itself was not enough to not be able to recommend this title, its low graphic quality, the inconvenience of the controls and the multiple bugs of those who show off manage to subtract points from a proposal that, carried out in another way, could have become fun. Not recommended, not even because of its difficult-to-access online cooperative mode, although it will surely give streamers and YouTubers a good time.

We prepared this review with a code digital copy of the title for the PS4 version of the game provided by the PressEngine.