Story of a beautiful friendship and solving puzzles

Juggler Games invites us to see the war through the eyes of two friends who want to play and be together.  My Memory of Us is a game where you realize that the horror of the battle can also be told from children’s perspective, which is truly rare to be seen in video games. Developers at Juggler have managed to mix friendship, action and stealth with many puzzles; either of the types finds the object or with mini-games. A story that anyone regardless of their differences will enjoy.

My Memory of Us begins with the subway ride of a girl whose passion for books never ends. So much so that she reaches a small hidden bookstore, where she finds a small book, she shows the bookseller at the end of a corridor. He is surprised and excited to see a piece of a photo fall, the illustration of which reminds him of the story of friendship in the middle of a cruel war. And so, as if it were a book character, we meet our first protagonist. A rogue who is being chased by the police is forced to jump from the top of the roof to fall into a container and become unconscious. Who wakes it up? It is not a mystery: our second protagonist, a kind and affectionate girl who helps him out and, taking his hand, takes him to spend a fantastic day. 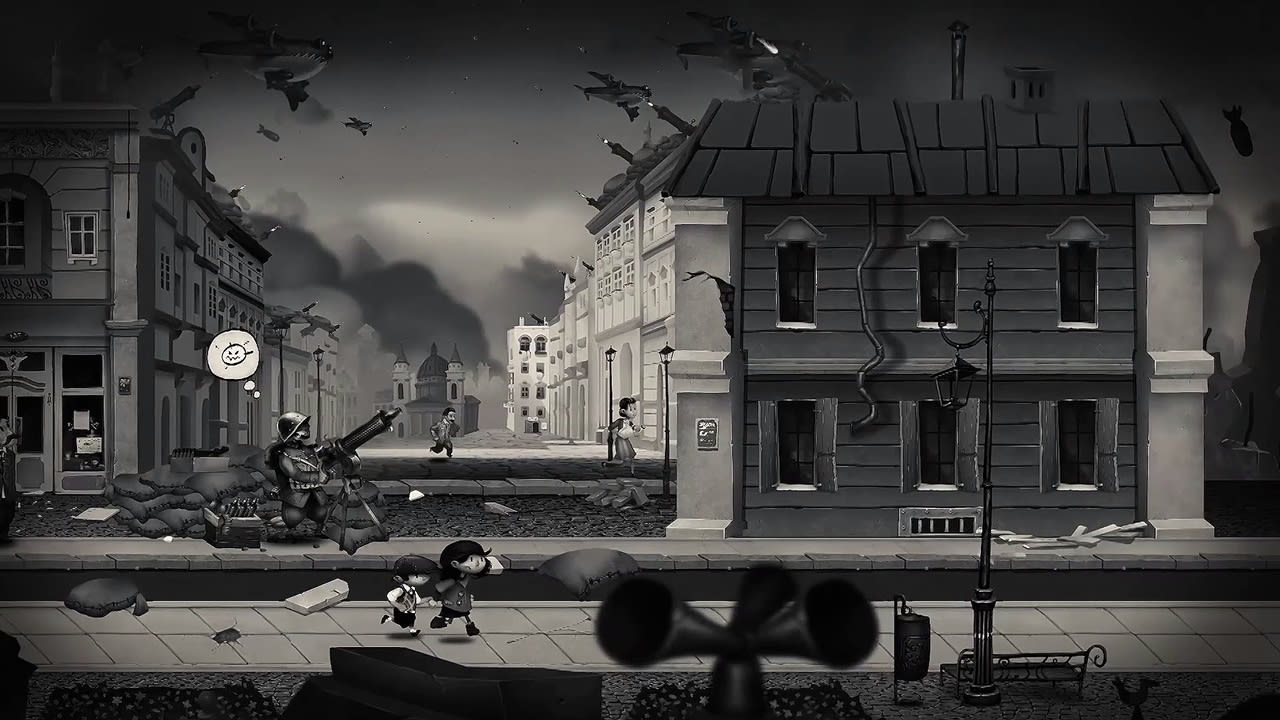 Everything was not going to be a normal life living with her grandfather, playing in the park with the slingshot or dancing to the rhythm of the piano in a bar. We will also get in trouble when we want to get a cake to celebrate our friend’s birthday, for which stealing a cake will send us to jail. Our partner will free us, but when we leave, we find that the sirens do not stop sounding, and thousands of bombs begin to fall from the sky. The two friends will run to the bunker to save us from the horror that lies ahead. Once safe and without hearing the noise of the bombs, they will decide to leave and what they will find is a city subjected to the army of the Robot King.

The gameplay of My Memory of Us is simple since we only have to go forward or follow the signs that show us the way. Nothing will make us lose our way except the colour red. In this game of gray colours, seeing something red indicates that we have an object to interact with or an area to be very careful of. 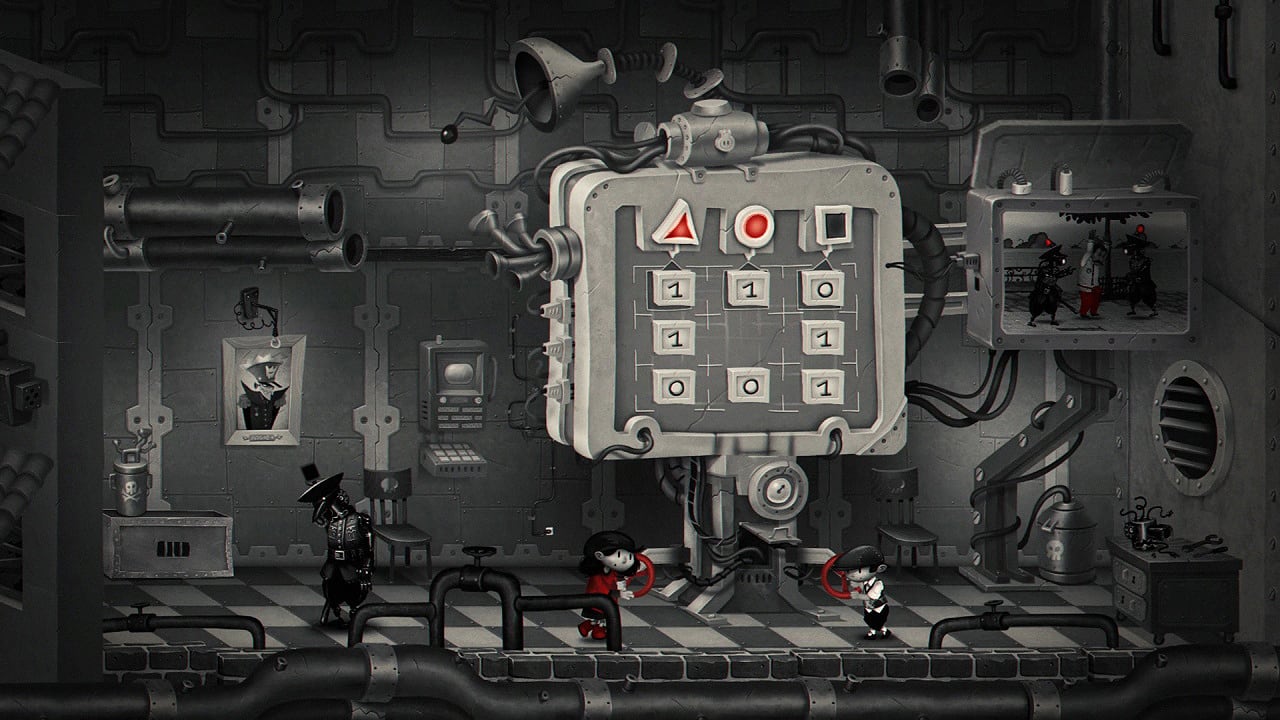 Each character has their own abilities. This makes us go, on many occasions, hand in hand with our partners. Being smaller, the boy can get into narrow places and be more stealthy, while the older girl runs more and has great aim with her slingshot. Their main skills (running and stealth) are shared by holding hands, being especially useful at specific moments in the game. Considering that our protagonists, robots and other characters with whom we interact do not speak, their voices appear like speech bubbles from a comic with gestures and drawings. 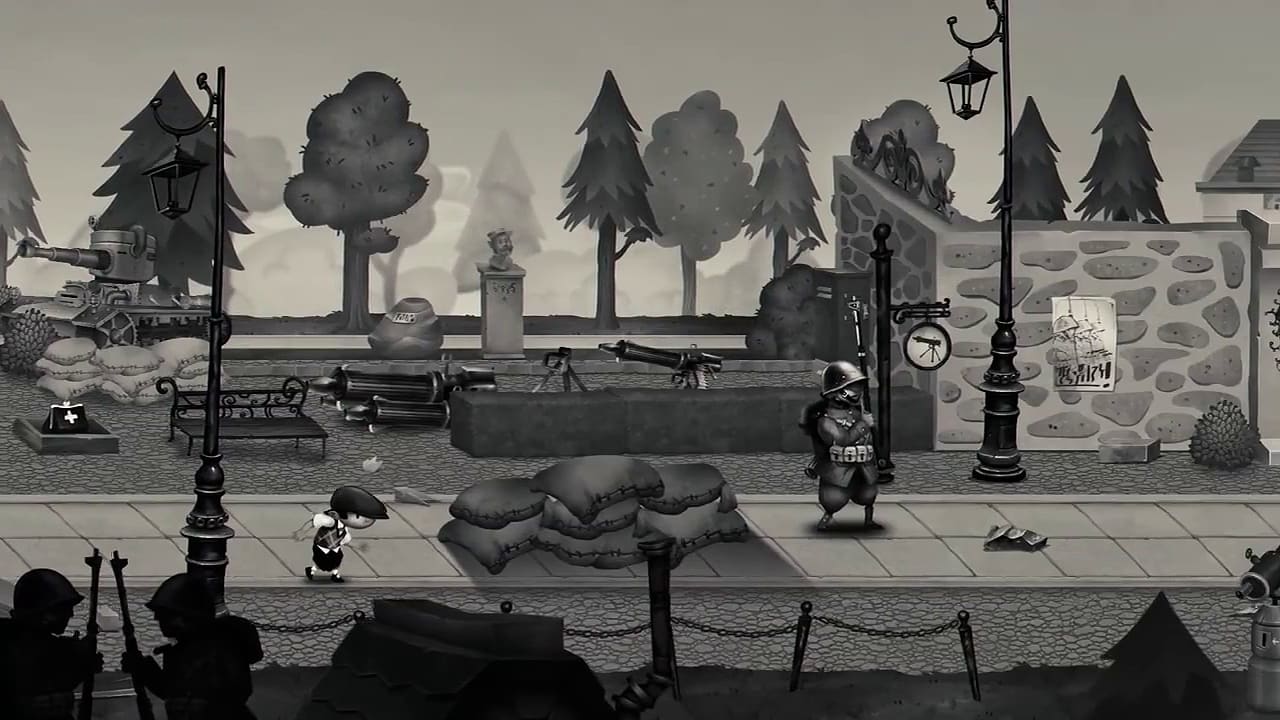 Going up and down boxes and roofs, moving objects or playing hide and seek will be some of the things you do the most. All this without losing sight of the puzzles, ranging from painting a picture by placing the missing pieces, directing pipes so that the enemy does not catch us, deciphering passwords to open doors, or getting a tool from inside a robot. 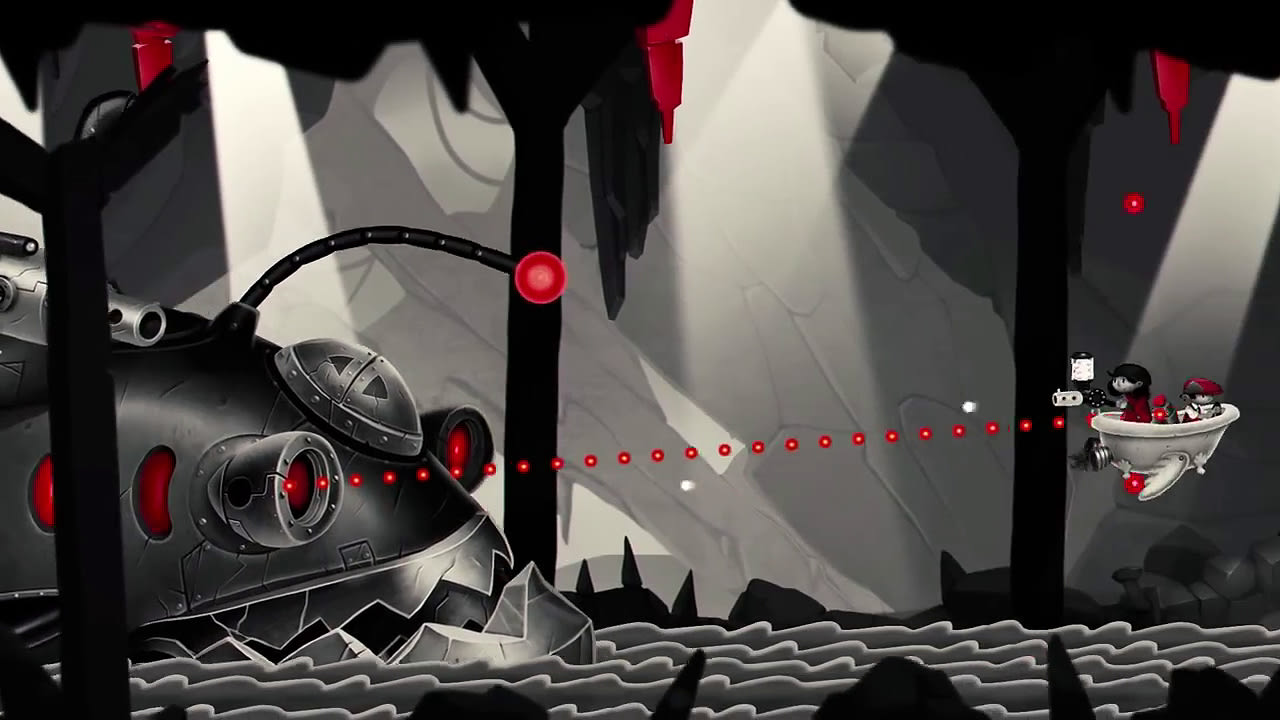 Graphically the developers have done really nice and detailed work. Its gray hue collides with the red of objects, no-entry signs, or our protagonist’s jacket and boots. All mixed with animations that, without being violent, make you get a fairly clear impression of the war being fought. What is most striking even graphically is how they have captured the affection that our two characters process. Simply by holding hands and pulling each other forward without either being left behind. 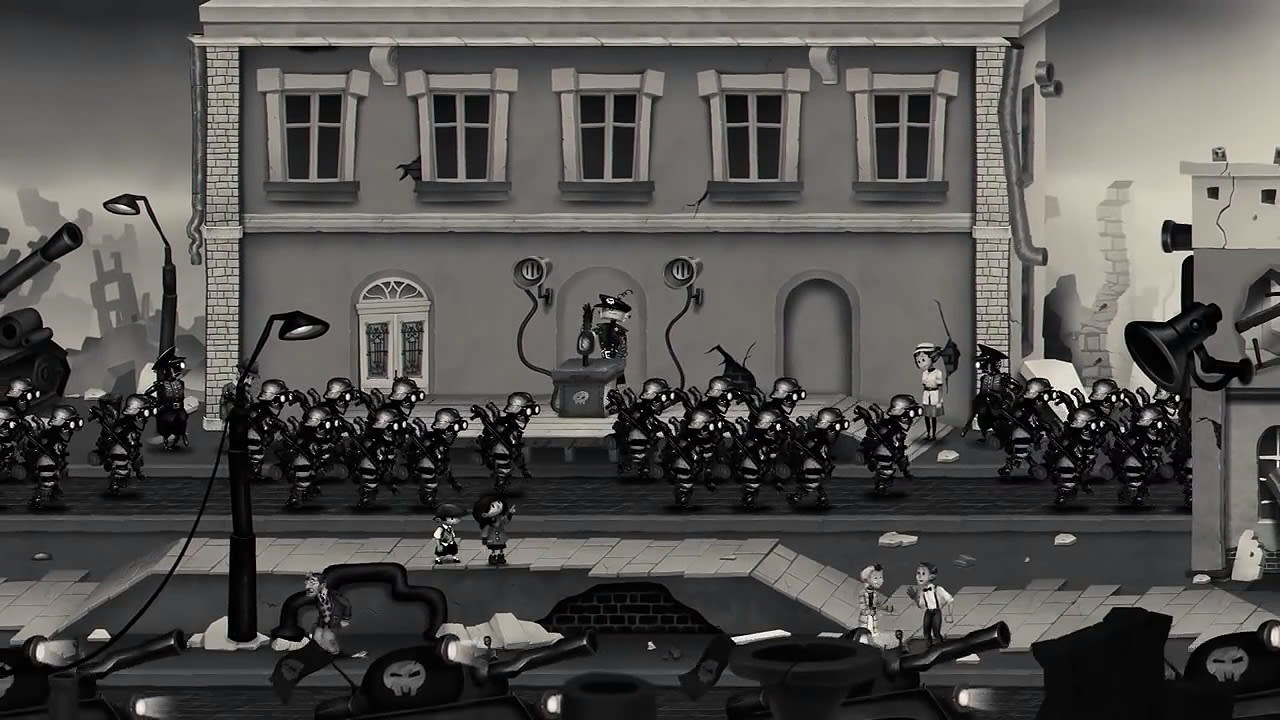 The music that accompanies us is the game has many notes of melancholy, uncertainty and strong as well as delicacy. We cannot pass up the voiceover that appears in the prologue and at the end of each chapter (18 in total) since it is about  Patrick Steward, for many familiar for starring  Professor Xavier in the movie the X-Men. 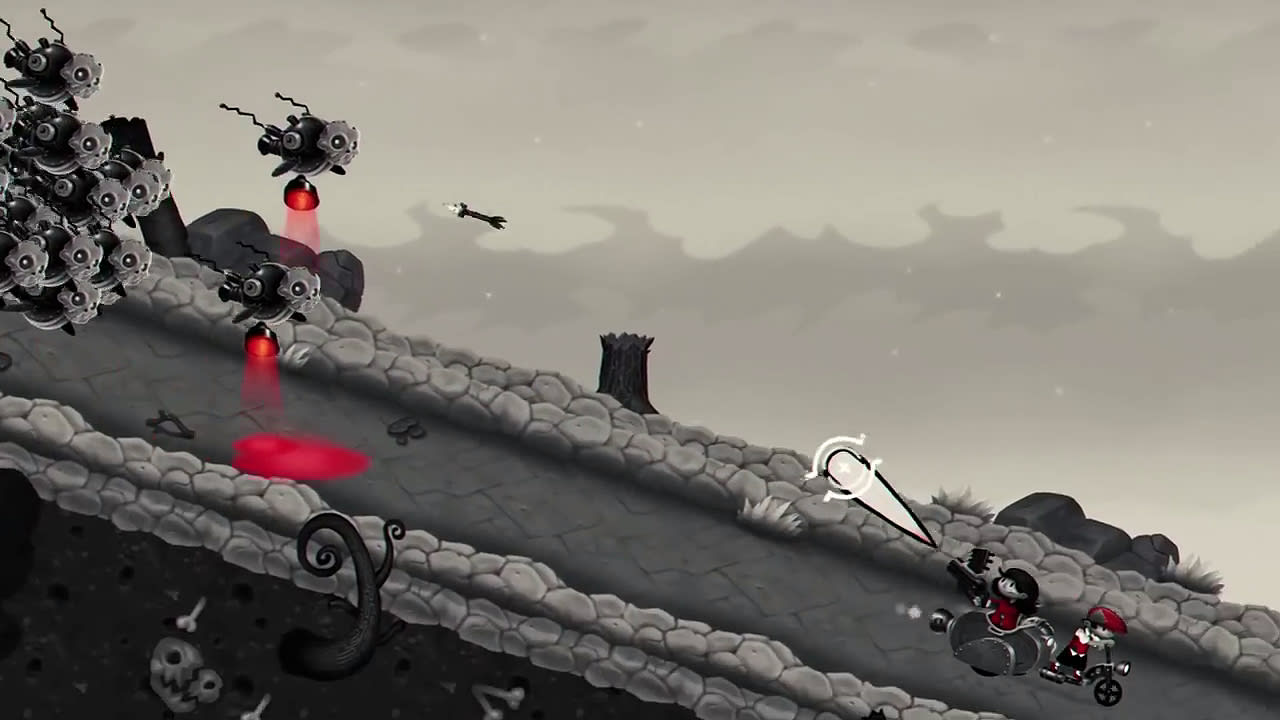 My Memory of Us proposes a wonderful experience. The sensitivity and affection that Juggler Games has embodied in this game, even in a war and not wielding a single weapon, is incredible. The graphics, the story and everything that accompanies this game is well thought and designed. A title that I recommended to gamers of all ages.