The Netflix series becomes a videogame in a basic tactical RPG with an emphasis on the action that allows us to follow the rise and fall of Pablo Escobar and his drug empire.

Netflix was able to find success in certain countries with the television series Narcos. The streaming platform was able to expand its market share in multiple territories by offering entertaining production and for the mass audience, which narrated the beginning, expansion and fall of the drug king, Colombian Pablo Escobar. With a cast full of familiar faces and new faces that became popular thanks to the popularity of the series.

Now, with several seasons behind she  Tv series – the last one focused on the rise of Mexican cartels and their current hegemony – Curve Digital and Kuju have decided to step forward and develop a video game with Narcos: Rise of the Cartels focused on  a tremendous historical ground, emphasizing the point of view of the Medellin cartel and the relentless struggle of the DEA and proposes us a fun turn-based tactical action game..

Making a Narcos videogame may seem like a somewhat strange or impossible company, but Kuju wanted to strengthen the idea based on a concept that we thought was very intelligent. Without leaving the usual canons of the strategy in turns, and let’s not forget the excellent XCOM mechanics, the developer wanted to create an idea of ​​tactical combat from an area perspective. In Narcos: Rise of the Cartels we can plan our games with some peace of mind, choosing the best possible plan to face the different missions, arming our soldiers and team members and adjusting their role and hope this leads us to success, although as we will see later, everything is an illusion, and we will only want to take action to impart justice or raise reputation . So far, everything more or less ordinary, but it will be when things get ripped apart at the moment when Narcos takes another playable course, at least for a fraction of a second, allowing us to even shoot in the third person as if we were involved in a typical shooting game. 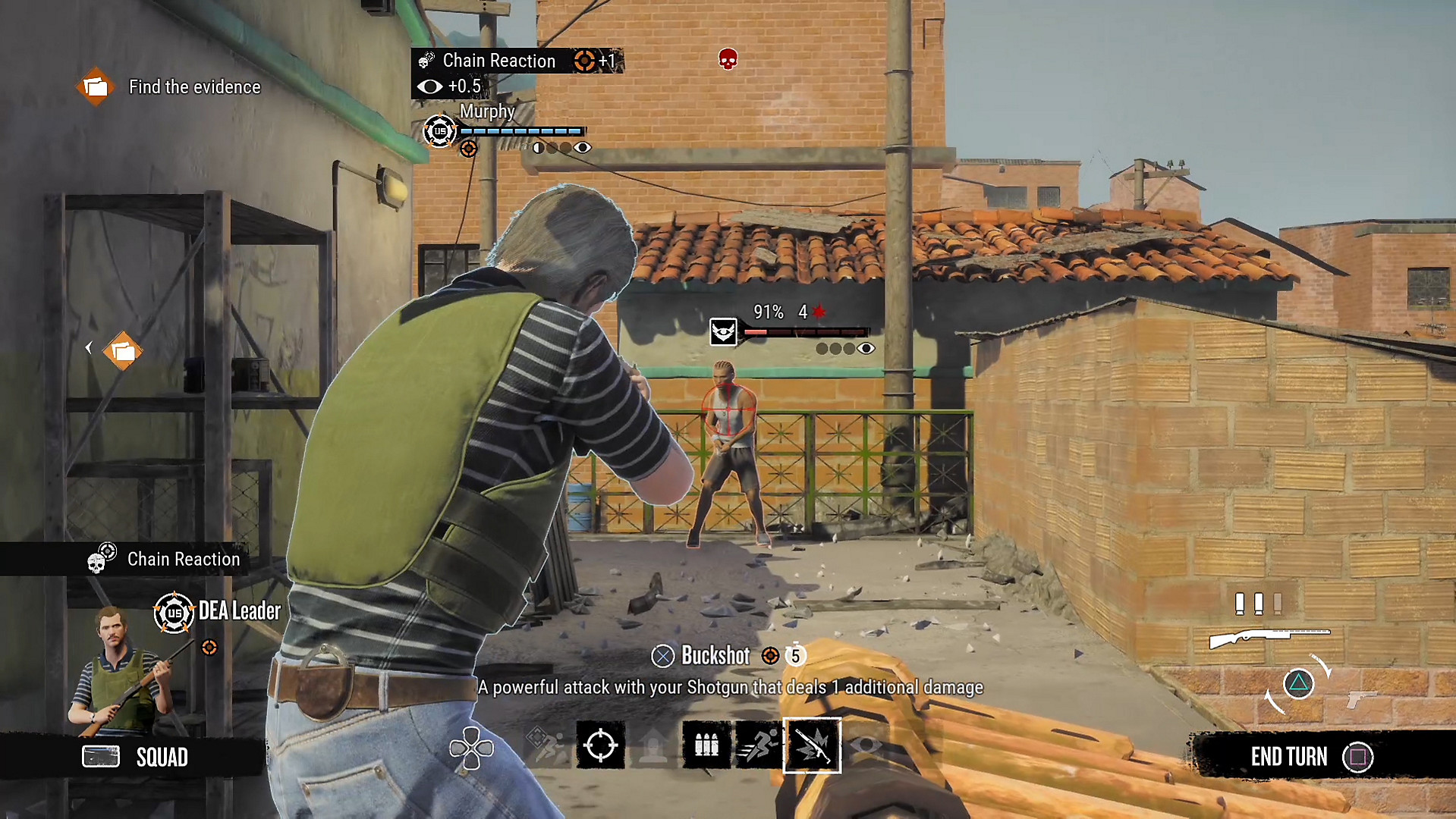 Narcos: Rise of the Cartels allows us to relive on our own, and with high fidelity, several of the capital or mythical events of the first season of the series, as well as expanding some others and incorporating historical ingredients or real events. Kuju’s idea as a developer has always been to expand the story seen in Netflix’s production, contributing her events to make her even more attractive. Therefore, we talk about an almost literal adaptation of the locations of the television show, with 3D recreated scenarios based on their real counterparts and with environments, key sequences and characters identical to those that both enthusiasm and passion raised a few years ago. Yes, The Mexican, Murphy, Peña, Primo and many more will have their presence and will even be playable characters, each of them with special abilities, improvements and unique characteristics. 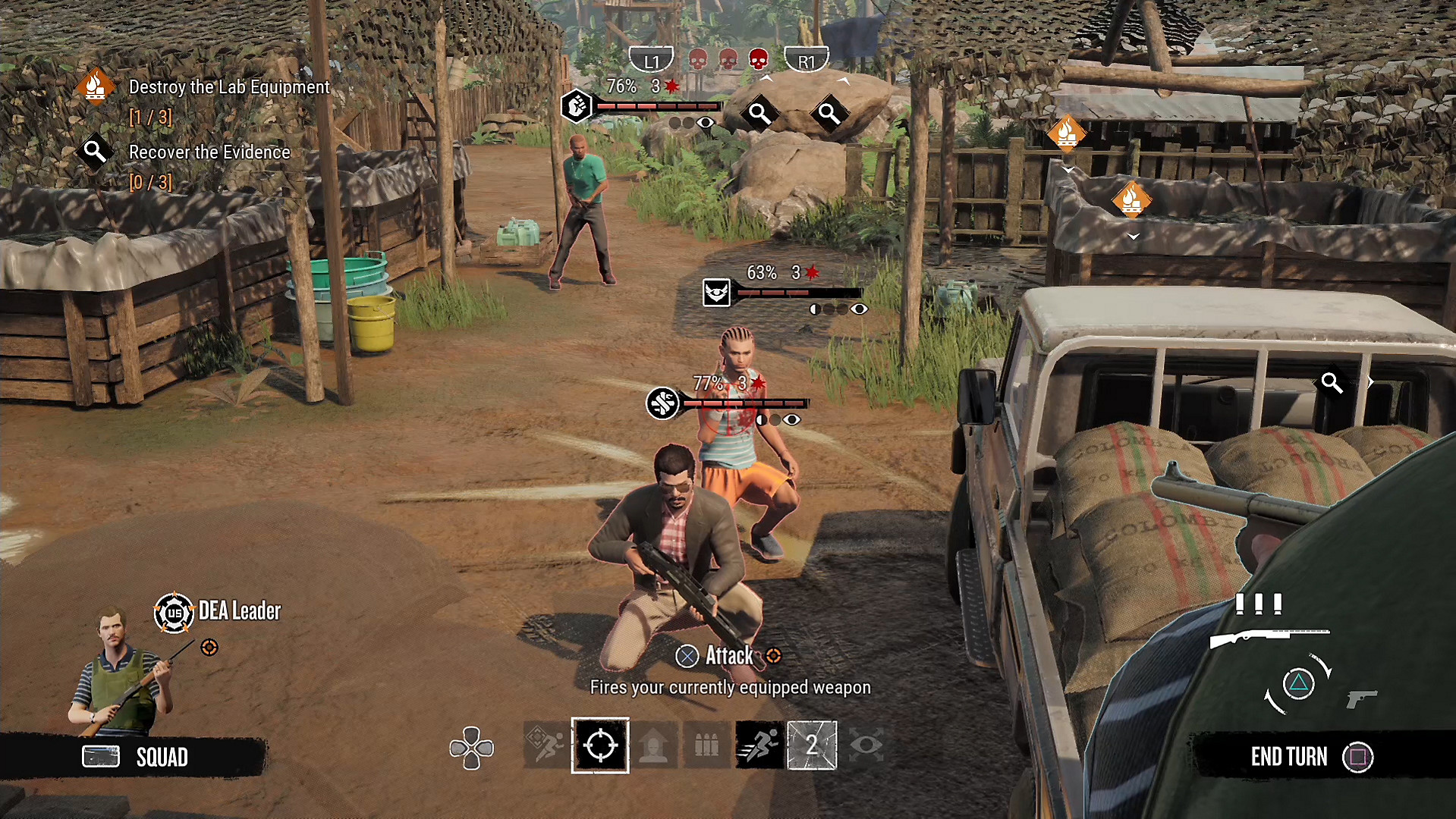 The title allows us to control both sides of the conflict, helping drug traffickers build and build their drug empire under Escobar’s orders or fight the growing crime alongside the DEA and Steve Murphy’s men. They are two differentiated campaigns, different from each other, although, with similar facts and shared moments, that will allow us to live the war against drug trafficking from the two possible points of view. They are two relatively lasting stories and entertaining that will allow us to spend several hours hooked and preparing our incursions and missions, and that will vary relatively our way of dealing with them due to the equipment and the adjacent elements in each of the sides, which have different handicaps and bonuses. Both Steve Murphy and Pablo Escobar will send us missions and help us to count progress, although the former does have an outstanding in-game role, being fundamental as a battle leader in the missions thanks to the skills and inspiring presence.

It should be noted that, as a turn-based 3D tactical action video game, Narcos is more direct and combative than usual. The units move around the map and the scenarios – very intricate and well designed, with multiple recesses and heights – and shoot alternately, offering us some more dynamism. For example, instead of moving our entire squad in a single turn, we will have to move from unit to unit, giving us straightforward meetings within a few seconds, and inviting us to adapt our strategy constantly, avoiding long periods in which it breaks the pace of the game. However, and although the first minutes are satisfactory, Narcos: Rise of the Cartels gives the feeling that it contains too much, showing us some first missions that serve as undercover tutorials under the protection of the DEA – it will not be until a point is reached when the possibility of playing like Pablo’s narcos is unlocked -, explaining the mechanics and continuously launching new ideas and opportunity. 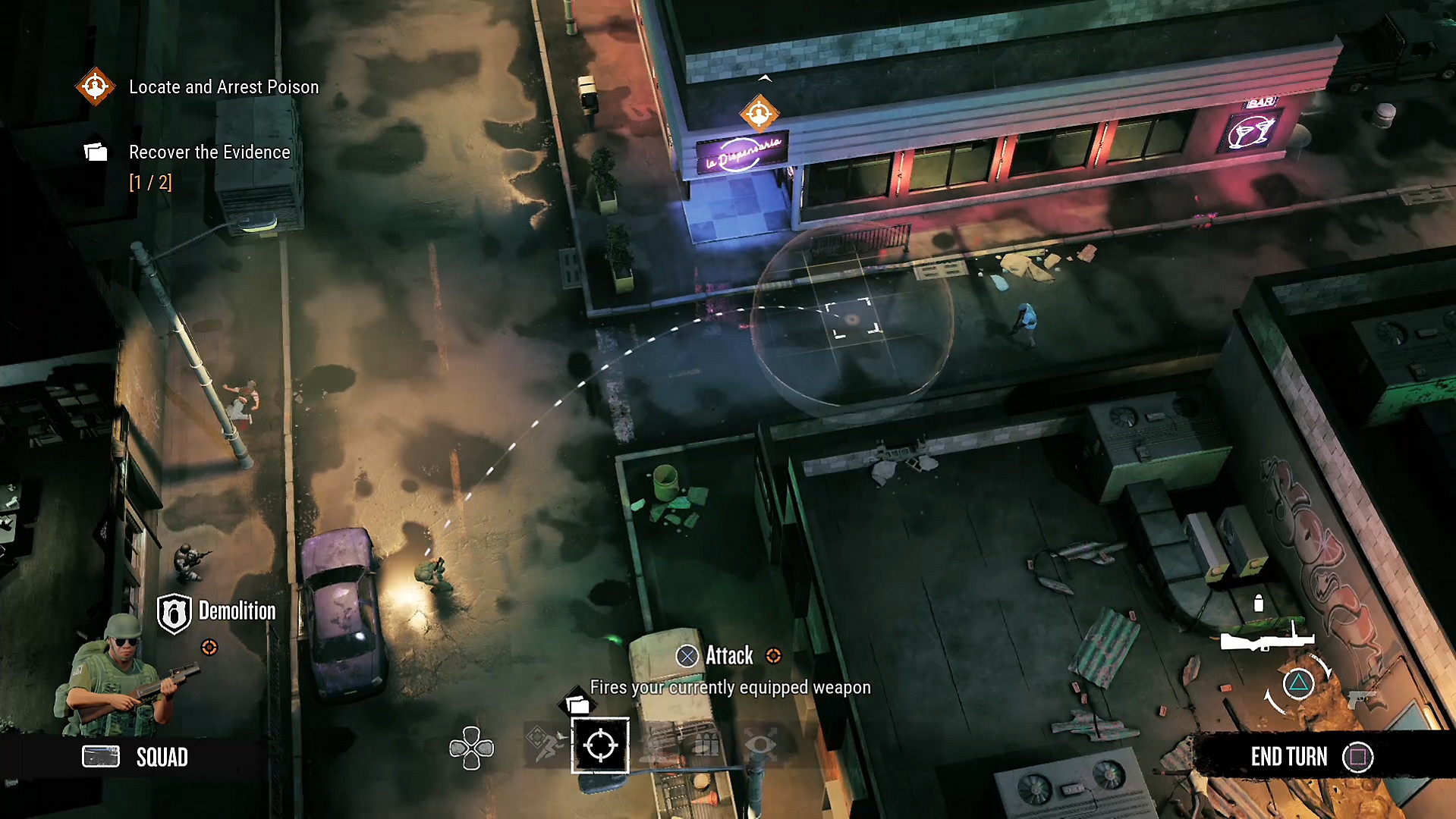 We speak of a straightforward title, which, although it collects ingredients from other titles, makes them quite simple and straightforward, and as we mentioned, always focusing on a frantic and direct rhythm in the fighting. During our turn, we must execute one or several necessary actions, taking into account that everything has consumption and a cost and that we cannot always do several things at the same time. In this way, we can move, attack – if we have the enemy in the line of fire or is not covered -, rest to recover life and reload ammunition for our weapon. To this dynamic, we must add that there are up to five categories of combatants, exceptionally diversified and specific in the case of the DEA, each with a particular role in combat. We will find experts in demolition and grenades, special forces soldiers, unspecified Colombian police, US agents and army recruits. Equip and hire them will not be cheap, since the video game includes an individual element of management -very poor-, which will force us to take care of our precious units, avoiding the tedium of having to re-recruit them and spend the money we get with each mission

However, the title betrays itself, because the tactics and strategies that will best serve against an aggressive and clumsy AI turn into the bait, sacrificing basic units of the team so that the strongest can enter the rag and crush the first exchange. Sometimes coverage or plans have little importance. The title is frantic and wants a lead exchange. Still, any tactical element fades within a few minutes when we realize the type of combat or rules of confrontation that prioritizes enemy artificial intelligence. For example, at levels with various heights – such as those set in cities and urban settings – the rival will decide to get out of his best position quickly. We have surpassed challenging a priori levels by taking out the pawns – generally, the Colombian police – insight so that Paul’s thugs are thrown for them and discovered or shot. Although we usually talk about a simple and easy video game, we appreciate the game continually looking to surprise us with varied missions, with a collection of tracks and documents, elimination tasks, resistance to several rounds or destruction of laboratories and cocaine stores. 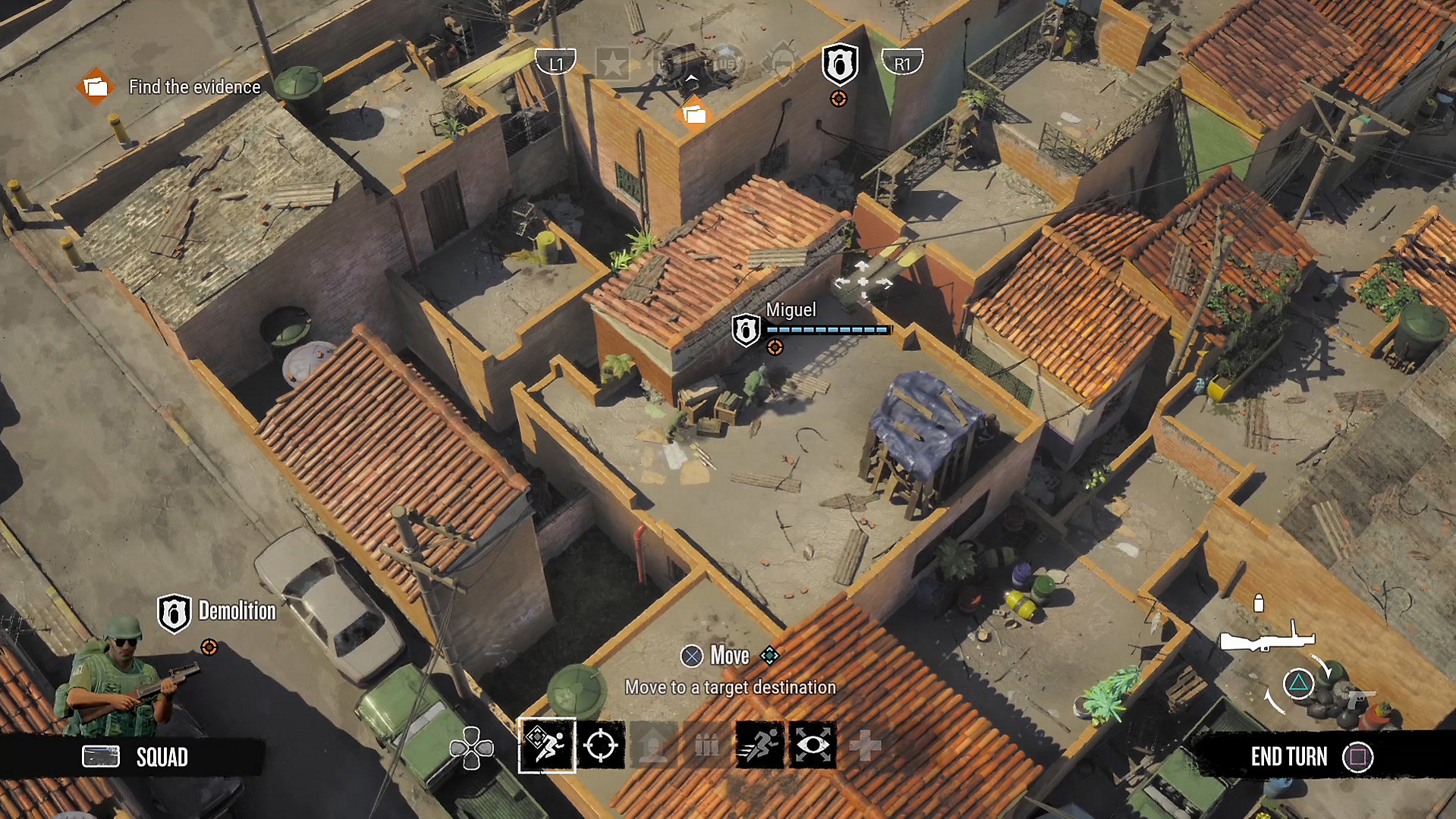 It should be noted that, although the two campaigns can be finished in a dozen hours, the creators of the title have confirmed that they would love to add new chapters and missions based on the second season of the series or even go further, offering us a title that goes growing over time based on new difficulties, challenges, downloadable missions or expansion campaigns. Kuju has not specified more, but it would not be surprising if we saw a Narcos 2 or a  DLC in the digital stores in a few months.

Narcos: Rise of the Cartels, surprisingly, is visually pleasing. We have analyzed the video game on PlayStation 4 – it is planned for Nintendo Switch, Xbox One and also on PC -, and sometimes, we must emphasize that we have found it very good in terms such as the design of the scenarios and maps of the battles, looking to be varied and consistent with the aesthetics of the Netflix series. We will experience confrontation in the streets of Colombia, in its jungles and some luxurious mansions, and we will always have the feeling of visiting something different, whether at night, during the day or in the rain. The modelling is based on the real actors and actresses of the production of the aforementioned streaming platform. Although they are not bad, it would not have been too much to offer them with a touch of detail in textures or animations – their faces are hieratic. Of course, the dubbing does have the voices of the cast, as well as the original music is used -including that of the emblematic introduction-. 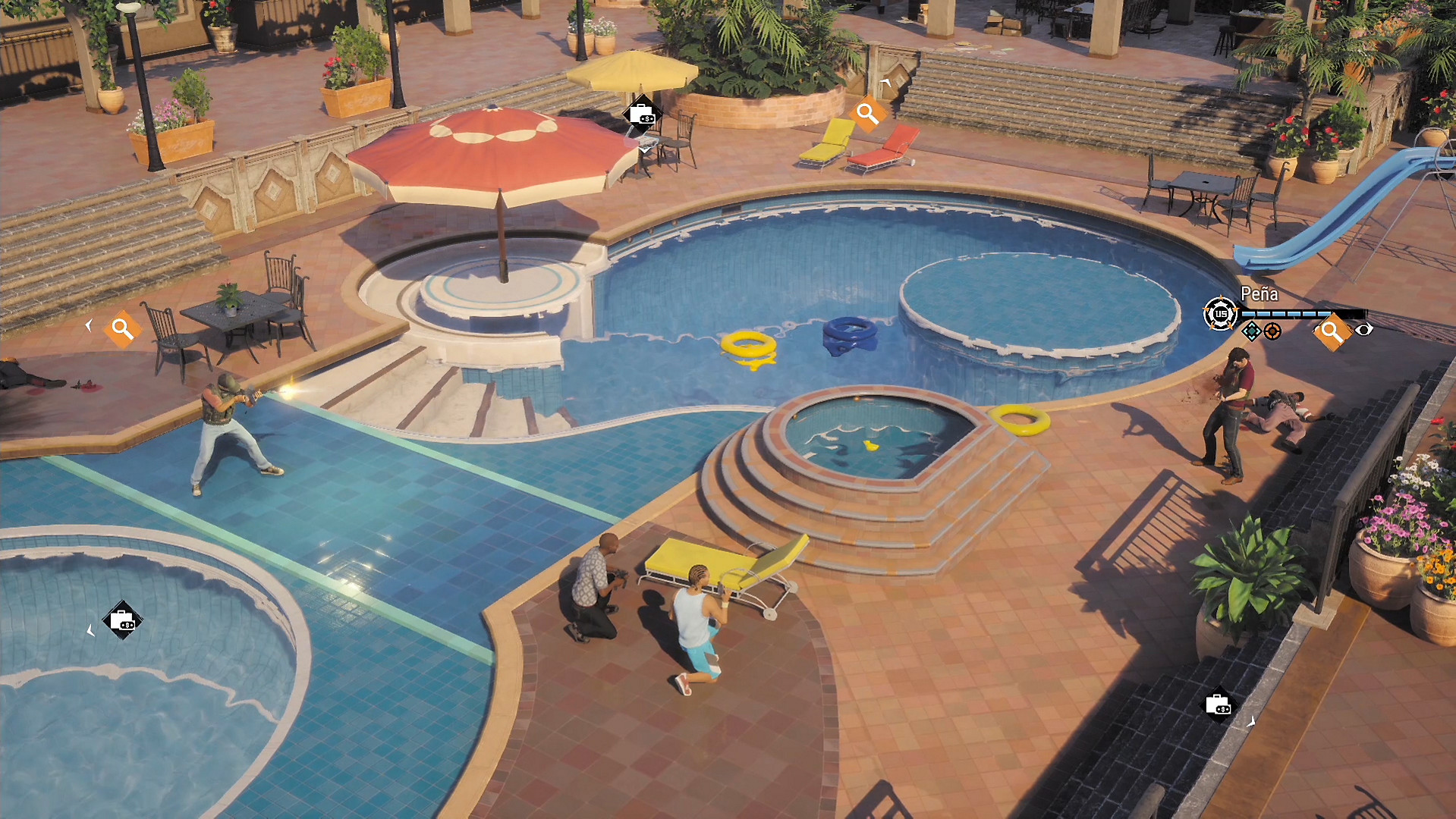 But there the good ends. Narcos does not take advantage of its technical strengths developed thanks to Unreal Engine 4, and the scenarios end up being mere cardboard-stone environments. There is no destruction of coverage, even the simplest, such as when we throw grenades or explosive elements at things like gas barrels or cars, a component that could broaden the sense of strategy and tactics. Again, all playable gaps are demonstrated, and in the end, the visual impact that we could treasure disappears quickly. 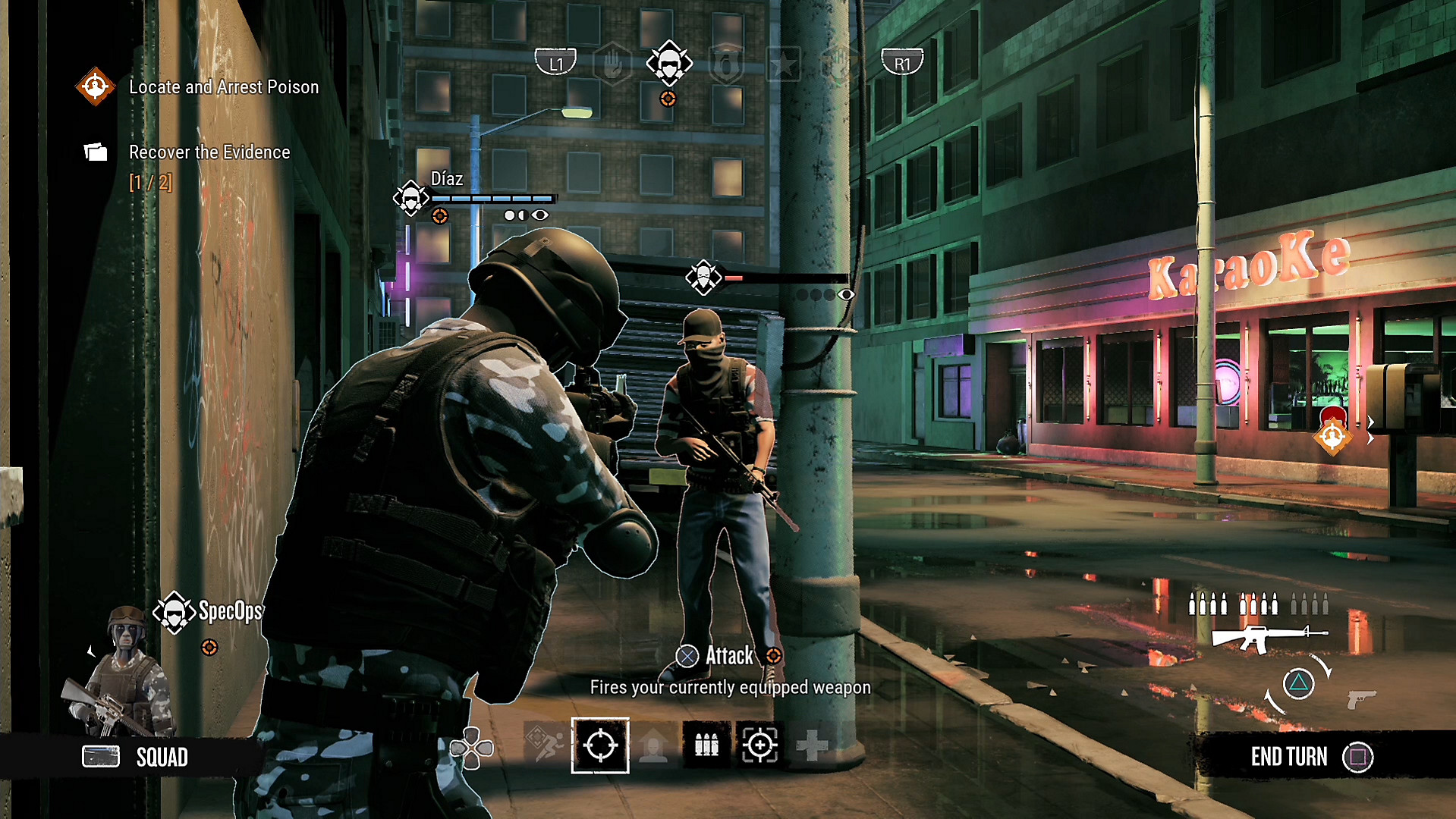 Rise of the Cartels treasures a decent technical title, a fascinating idea such as focusing the tactic on a succession of fast and straightforward turns in playable terms and even has the official license of the Netflix show, something that allows developers to use actors, actresses and elements extracted from the television series. However, that’s all there is to it. The strategy ends up being reduced to the ridiculous, continually inviting us into combat without too many views, and forcing us to repeat the most basic tactics, sacrificing low-cost units and waiting for the typical ‘duck hunting.’ With a weak side of team management and contracting , and with little replayability, Narcos: Rise of the Cartels is not too recommendable unless you are a true fan of the  series or turn-based tactics games, regardless of their origin or quality “When  you  get too close to the sun, your  dreams may   melt  away.“ Pablo Escobar said in one of his most memorable monologues and that’s exactly what happened to this video game.

We have prepared this review with a PS4 code provided by Curve Digital.