The Onion Soup studio presents its first game which mixes a marathon through Japan with a group of extravagant characters as participants.

In the past, there were several titles of Japanese court that left the players speechless watching the mechanics and styles they developed in a context that, in certain cases, dislocated to reach the absurd or the surreal. Games like LSD Dream Emulator, Super Galdelic Hour, WTF: Work Time Fun or Cho Aniki are some examples of this.

In this case, Nippon Marathon aims to follow the wake of these games by mixing a somewhat surreal plot and somewhat quirky characters at the same time extravagant with a gameplay that the main premise lies in winning a marathon by stages in which the course is plagued by obstacles and travels through different locations throughout the prefectures of Japan.


The game has different modes at the beginning. The first is the story mode that allows you to choose between four possible characters between Darwin, a mysterious guy who dresses as a lobster, Nishibori, a girl who adores unicorns and dresses as one, Zenbei, an old man who is dressed like a schoolgirl, and finally Snuguru, a character who has a dog’s head and leads a dating agency. Each story is developed through several sequences that narrate the plot using the game engine and that increase the percentage of completion of it. In between the various sections of the marathon are included in which you have to compete against three adversaries and try to win in order to continue advancing in the story mode. In case of not achieving it, it will be necessary to start the stage again. 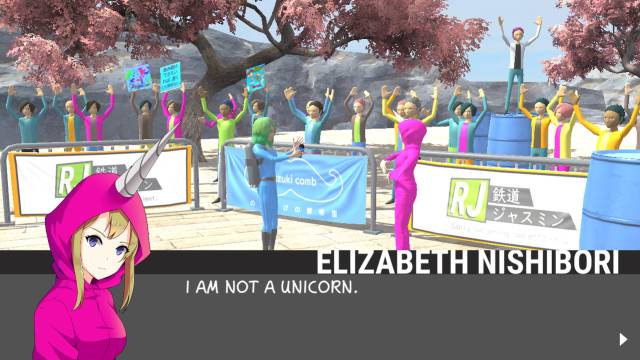 Each section of the marathon consists of routes in which to avoid obstacles while trying to get several items to get advantages or stop the opponents. There are four different types obtained at random: banana, pineapples, watermelons and mushrooms. These allow you to eat them to gain greater speed and get to increase the distance or cut it with respect to the opponents, depending on the circumstances, while if they are used different effects are obtained depending on the object. For example, bananas allow to leave the shell to make opponents slip, watermelons are thrown to try to reach the rivals and temporarily knock them out and pineapples can become balloons with which to float for a limited time. On the other hand, the mushrooms produce negative effects decreasing the level of precision of the one that takes it and reducing their energy and popularity until being exhausted, even if it is consumed. A maximum of two items can be taken, one in each hand, and can be used by pressing buttons L1 and R1 slightly to use them or hold buttons to eat them.

Each stage will tour various cities in Japan, although with altered names, and include different types of obstacles ranging from barrels and crossing bridges to having to dodge dogs that will chase the contestants, dodge bystanders, types with slats or transporting showcases. In addition to different height changes, such as climbing elevators, or jumping considerable distances from rooftops to other buildings. For these tasks, the player can use other movements such as bending over, with the circle button, or jumping, with the X button, as well as being able to jump on the grid, with the square button.

Each participant has at the beginning of the stage a total of five stars in his meter that in the development of the stage are lost or won depending on whether the character is left behind or ahead of his rivals considerably. To get a wide advantage, the character declares himself the winner of that section of the stage and wins a star, resuming later with the rest of the opponents to continue the journey. On the other hand, it is possible that at certain times the resumption of the stage is stopped by the appearance of Wedy Jones, the reporter of the marathon, or by running a mini-game of roulette with which to get items. In the case of the first circumstance, Wedy will ask a question to the participants questions with multiple choice, one for each participant, which denote the effects that will have on the public with the emoticons that accompany them. Depending on the construction of the phrase, the effect achieved will influence the reaction of the audience that will go from total disappointment to a complete cheer out that will affect the popularity of the participants, which in turn influences their score at the end of each stage. This will be determined by different conditions, such as the objects used or if the character has spent a long time equipped mushroom, and which will determine the position according to the total score accumulated at the end of it.

The Versus mode allows you to play the marathon facing other players in the same console or against opponents controlled by the AI of the game in four different modes : playing a single stage, playing half of the marathon (in two aspects) or developing the full event For its part, the Party mode of the game includes two different interesting game modes. The first of these is the Go-Go Trolley mode in which players can choose their favourite character and compete in a bowling game. However, the peculiarity lies in that to throw the bowling pins you have to throw the character up in a supermarket cart to knock them down. Yes, obstacles will be added with each throw like ramps with which to jump higher or barrels that will get in the way. 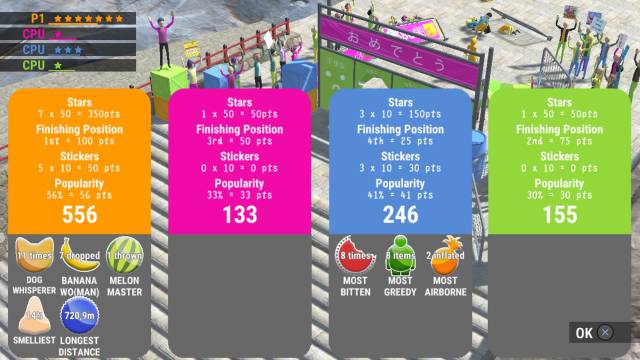 The other mode is the Lobster mode and its development is based on a confrontation between characters to get the greatest distance in a random tour, before the time limit is over, which can be increased by jumping on the targets that are along the stretch. After marking a limit, the opponent must beat that mark to continue fighting. If it fails, a letter of the word is obtained and the game is continued. At this point, Surfin ‘Jack Cactus, the presenter of this minigame, will spin a roulette wheel with four options which include two-time improvements, one light and the other wider, the possibility that pineapples appear on the route or that this may change to a different variant. In the end, the game ends when one of the players receives all the letters of the word, which is determined by the difficulty chosen before starting to play (being three letters the fastest and the slowest with seven).

The other game modes include the Wedy Jones travel guide, which is incomplete and requires gathering the scattered pages in each of the stages of the marathon to collect the information it offers various tips of the game, and a store that offers additional characters and extra game options , such as activating a turbo mode or disabling mini-games, for Versus and Party modes, with the money won with each stage completed or by winning in other game modes. Finally, a tutorial is included, through images, where Shiro Hideko explains the essential fundamentals when playing.

The game does not stand out especially. Its graphical section is quite deficient so much for the design of the modelled ones, poor in the case of the main ones and much more in the case of the NPCs, as for the animations and several details of the same ones. At the same time highlight that the game suffers from specific bugs in the AI behaviours, in addition to framerate problems and also load times somewhat considerable. As for the playable section, the game is where it gets to have some charm, especially playing with friends or family in the same console, as it is somewhat entertaining.

Regarding the sound section, the game includes voice selector in English and Japanese for comments while the game only includes dialogues but small phrases in Japanese for certain moments of the plot that are repeated on different occasions, even when they do not correspond or have no context within the dialogue. As for the music, different musical tracks are included that accompany each tour but do not stand out especially when it comes to playing, passing quite unnoticed. 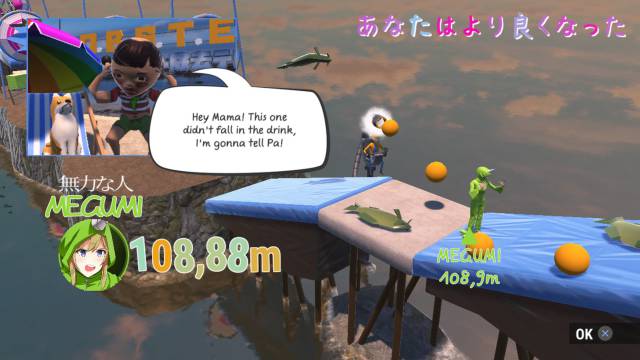 Nippon Marathon is as a whole a title that pretends to draw attention more for its Japanese court setting, its absurd style and its multiplayer facet. However, in the other aspects is where it fails mainly by offering a quite deficient graphic section that is mixed with a very basic menu design and an unattractive character design that results in an insubstantial title.