This year’s Kirby and the Forgotten Land was the first main installment of Nintendo’s veteran action-platformer series in a three-dimensional setting. Now, the developers of HAL Laboratory released a new spin-off of the pink ball. Kirby’s Dream Buffet, a small video game that is available for $14.99 in the Nintendo eShop and that invites players to compete in a series of arcade-style races for up to four participants in which the Kirby who crosses the finish line first does not win, but the one who gobbles up the most strawberries along the way takes the crown instead.

At first glance, one realizes that this new party game proposal by HAL Laboratory is inevitably reminiscent of other similar titles available on the market, such as the popular Fall Guys: Ultimate Knockout. The premise of overcoming certain obstacles in a three-dimensional setting while the players move forward in a straight line and try to throw their opponents off the game track is repeated in Dream Buffet, although, of course, with some original additions to differentiate it from its referents. Can you successfully combine the typical mechanics of Kirby games with elements of the previous Mediatonic game?

One of the main virtues of Dream Buffet can be seen as soon as you start the video game for the first time. It is that visually we are faced with a beautiful title, brimming with colour and with the charm that any staunch fan would expect from a title of this series. . It is inevitable that our mouths do not water by observing each one of the inspired tracks, as we could already see in their presentation trailer, in an infinity of foods, each one more delicious: cakes filled with cream, hamburgers, pancakes with syrup, sweet rolls, donuts or multi-tiered cakes, among many others. 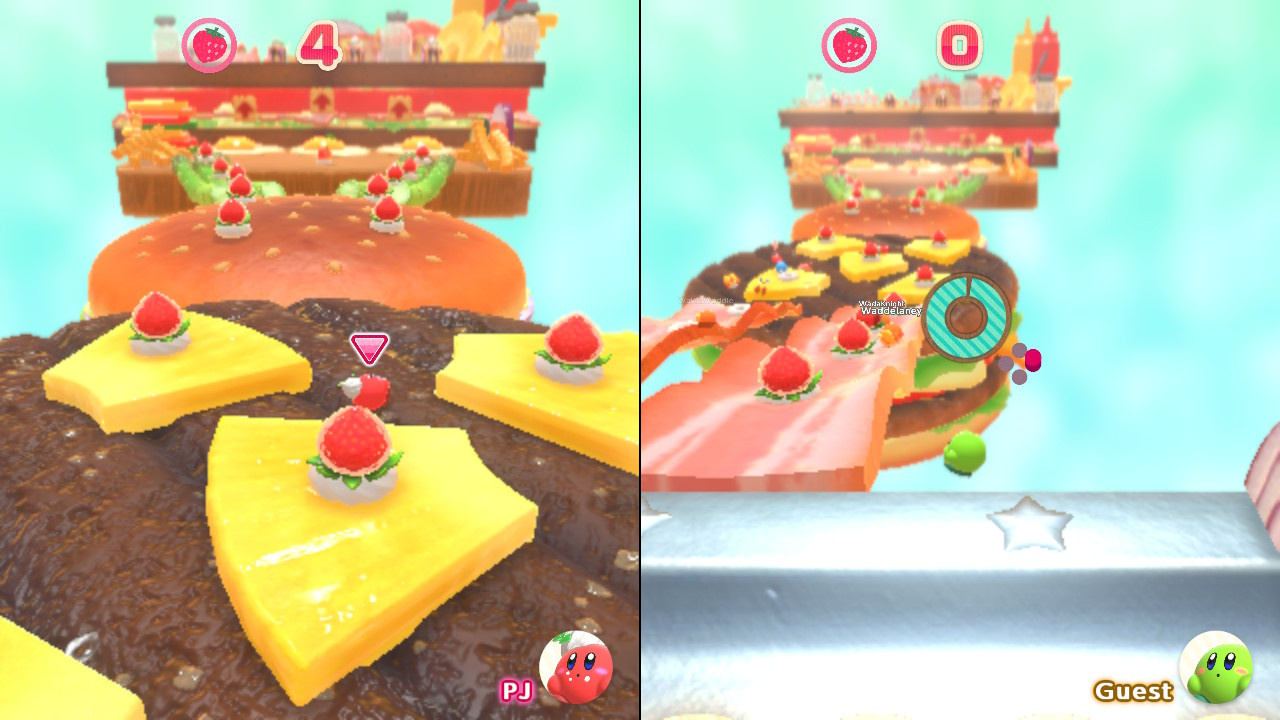 We could say that the title does its homework amply and plays in a league similar to Kirby and the Forgotten Land. On the other hand, it is essential to note that it works at 30 frames per second, a detail that a priori could make more than one think that it is insufficient for a game that requires good fluidity of movements. However, the truth is that the rate of frames is very stable except in small situations. The soundtrack is also not far behind, thanks to the fact that it has recognizable melodies from the entire series, including the catchy main theme and compositions from the last installment.

How to play Kirby’s Dream Buffet?

The major positive points of this spin-off lie in its playability and its accessibility. Dream Buffet is a game with a few basic actions -rolling, jumping and floating-, so even those who are not so familiar with video games can master it in a few games. The control is smooth and precise, which adds to the fact that the useful buttons are very few and easy to remember, resulting in an enjoyable experience for all family members. 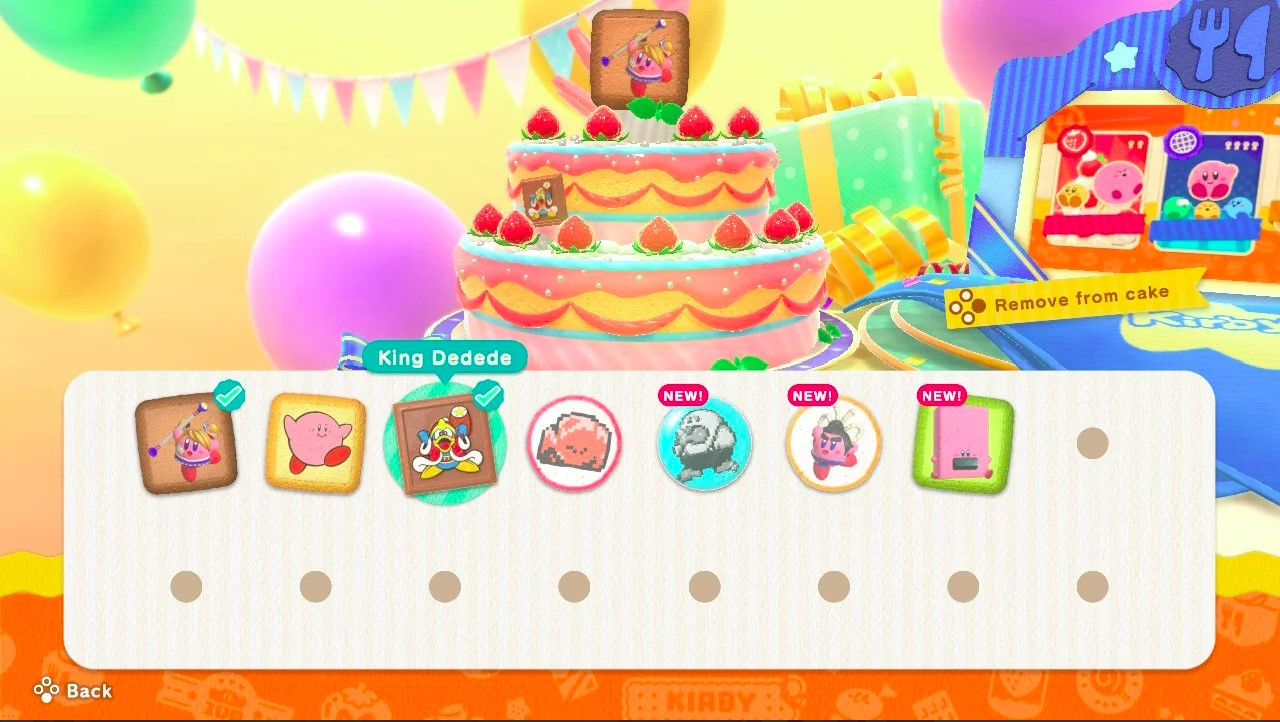 As we have highlighted at the beginning, the objective of this title is none other than to prime Kirby to the maximum to achieve victory at the end of the game. A striking aspect that affects the gameplay is that its mobility changes as the pink ball eats and grows in size. When the character is small, it is more manageable and can stay in the air longer if it is thrown out of the circuit by a rival, while when it grows, it gains speed at the cost of losing some manageability – it takes longer to change direction and jump minus- and float time.

The challenge of each game in which we compete on a circuit is that the player must find a balance between eating a sufficient number of strawberries -in addition to raspberries and other fruits- and not falling behind to reach the finish line and be able to gobble up one of the three giant cakes that grant extra strawberries. In this way, if you have a sweet tooth and focus only on eating everything you find in your path, the other players may take too much advantage of you, while if you go too fast to take the lead, you will lose many strawberries along the way.

The Grand Prix Gourmet Mode is, without a doubt, the star dish of this proposal, whether in offline mode, locally or online. In this mode, the three main minigames that make up the video game’s content offer are grouped: the Race Mode, which invites players to compete against other users in a series of circuits with different obstacles and enemies taken directly from the Kirby universe; the MMinigameMode, in which the participants must get the most strawberries in a small arena within a time limit; and Battle Royale Mode, which is presented as a chaotic fight to the death in which we must attack the rivals with power-ups -copy foods- to steal their strawberries.

At the end of a game in the Gourmet Grand Prix Mode, all the strawberries that we have obtained are accumulated in the Gourmet Rank meter to level up and unlock a good handful of rewards, such as new colours and costumes for Kirby, musical themes to listen to in the main menu or sweets to decorate a large cake. In addition, before the final result, several extra strawberries are awarded to those players who have performed specific actions, such as floating for longer or having defeated more enemies than anyone else. This final bonus injects a certain intensity into the matches because it shows that the final result can change drastically even if we become the winner. 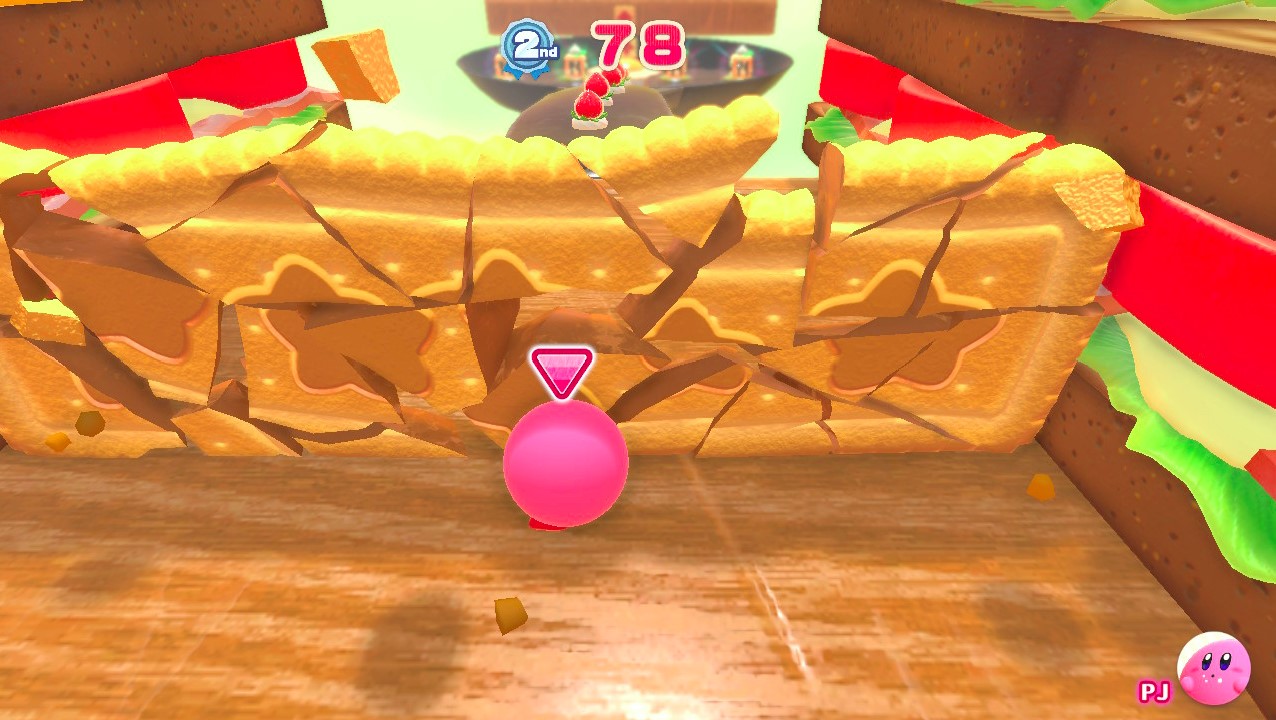 The best we can say about this mode is that, at least for the first few hours, it’s addictive. The rewards we mentioned and the brevity of the games encourage us to chain one game after another. However, as the hours go by, the lack of variety in the circuits becomes too evident: it won’t take long to memorize your entire route and best routes because they are too similar in design. The same goes for the minigames, which don’t particularly shine for their variety and aren’t too original. 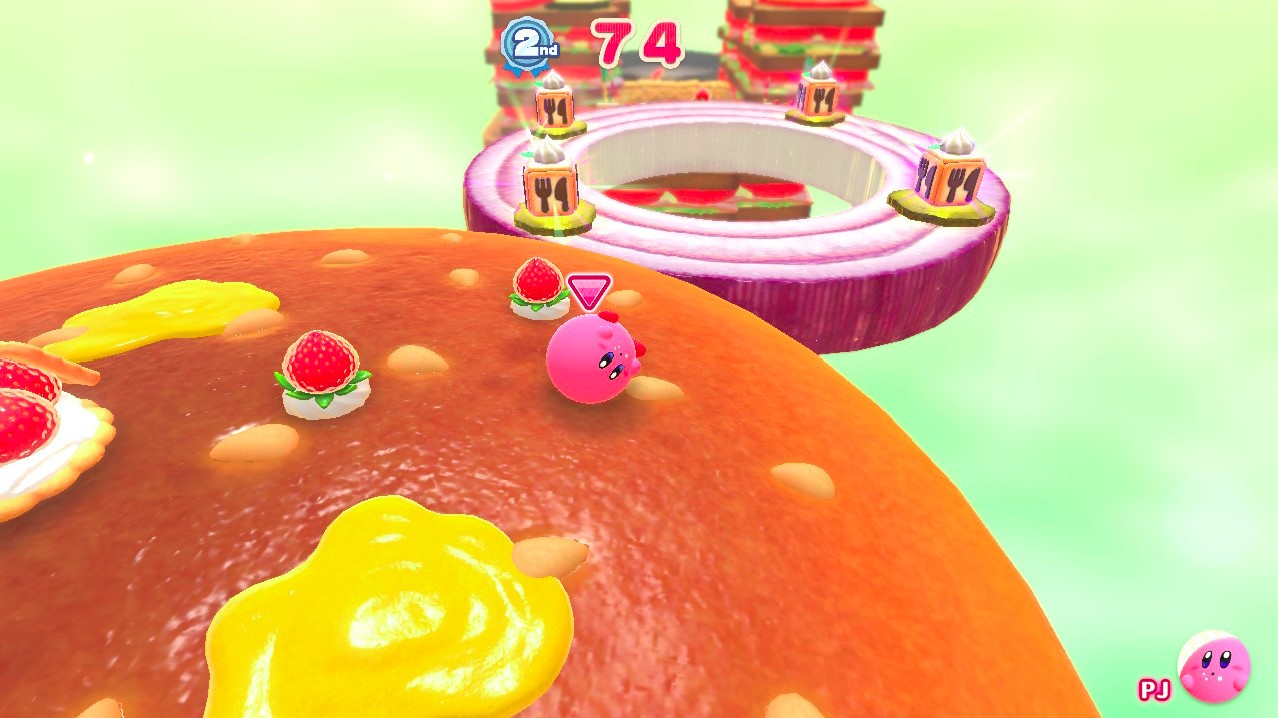 As you may have imagined, this scarcity in the variety of content generates a feeling of monotony in the player. The fact that the video game is designed for short games and not marathon gaming sessions seems to be a success, although even playing single matches, the repetition is so evident that it is impossible not to overlook it. Additionally, We should note that the title conveys a sense of zero progression since the costumes we get for Kirby offer only a cosmetic change, so they do not affect the gameplay. Even though the same thing happens in games of this style, this seems to us to be a double-edged sword: on the one hand, being offered improvements over other users favours everyone playing on equal terms and no one having an advantage competitive, while on the other hand, the player does not feel that he is improving and this causes him to get tired.

The online multiplayer mode is one of the main attractions of Dream Buffet. However, we recommend you play the Grand Prix Gourmet Mode alone and even improve your skills at the controls in the Wheel to your Ball Mode, a testing area available in the start menu, before you dive right into the online experience. We’ve been positively surprised by how quickly the game finds a match, so at least based on our expertise, we can say that you won’t have to wait too long. 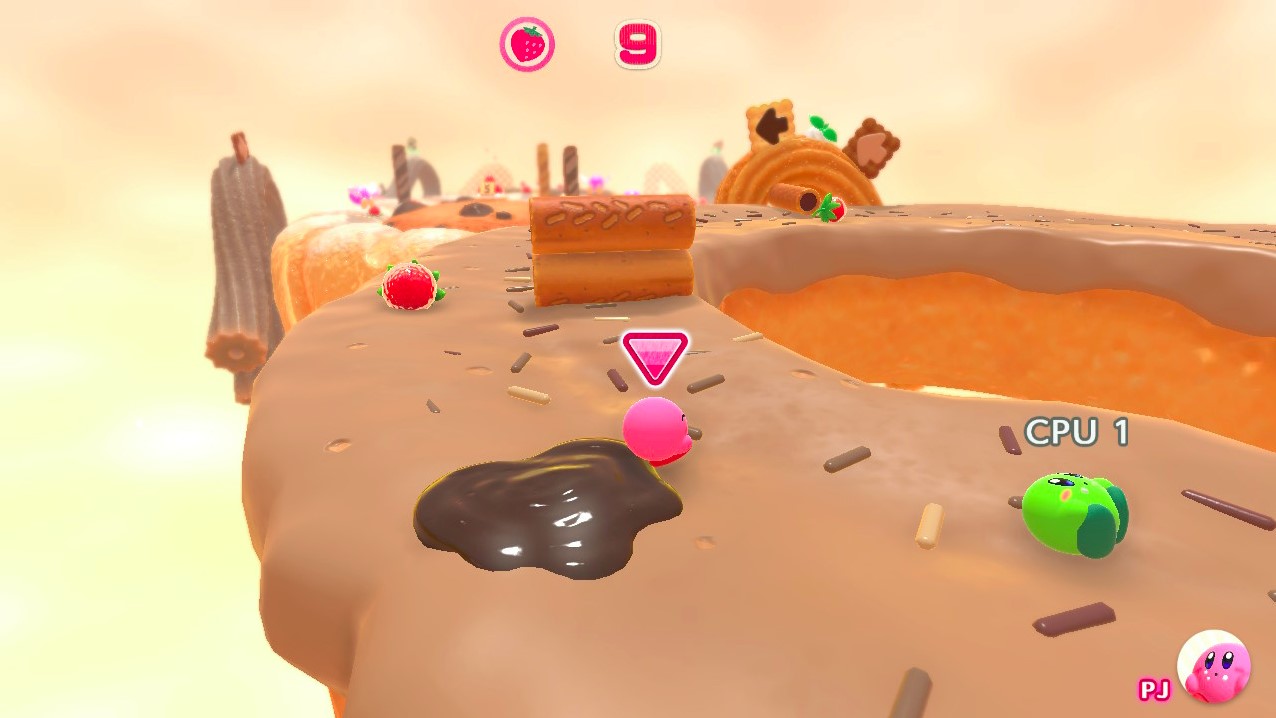 Unfortunately, the online experience is far from perfect. There are many occasions when we experience notable drops in frames per second, mainly when many elements are concentrated on the screen. The occasional hitch makes the screen freeze for a few milliseconds. The framerate is generally quite unstable due to more frequent slowdowns than we would like, and it does not come close to the fluidity that the game offers us in offline mode. To top it off, you can also see an annoying input lag that affects the precision of our jumps and movement.

It’s fair to say that despite everything we’ve discussed, multiplayer isn’t unplayable and is, in fact, enjoyable when it works as it should, though it’s far from an optimal experience. These errors are likely due to the servers’ overload after the game launch, so they could be smoothed out as the days go by.

Kirby’s Dream Buffet has left us somewhat cold. We are facing a video game whose maximum aspiration is none other than to offer simple and direct fun for the whole family, an approach that seems very successful to us. On the other hand, we believe that it successfully mixes the typical elements of Kirby titles with mminigamesand circuits full of obstacles and challenges that replicate the spirit of its inspirations. However, the title becomes repetitive after a few hours of play due to its limited variety of content and the multiplayer experience is marred by constant connection errors. Not a bad game per se since it has a good base and knows how to entertain, but it is far from becoming the new benchmark of its genre.

We prepared this review with a digital code provided by Nintendo.