The long-awaited "No More Heroes 3" by Suda51 arrives with an amazing title for Nintendo's handheld console.

No More Heroes 3 is a highly anticipated game, and until its announcement in 2019, a project seemed impossible. And after Goichi Suda having completed it, it seems he has had total creative freedom. This is his game, and that it’s clear as daylight he has done it both for him and the fans of the series. The game launched on Nintendo Switch on August 26 and without further due, let’s dive in and see if the title is worth the wait.

What Travis is up to this time?

Travis Touchdown, the magical girl anime guy who bought a laser katana from an online auction, and has repeatedly reached the top of the Assassins Association rankings, has a huge goal this time. Most ambitious: liberate the Earth from the gang of aliens that threaten to conquer the planet. And they could easily do it, but faced with the resistance of Travis, their leader, Prince FU, proposes a game: a classification of Intergalactic Superheroes that serves, after all, to structure the adventure in the same way as in previous titles.

In fact, this title takes it further: each section that occurs between one final boss and the next is a chapter like that of a Japanese animation series, with its opening and ending. At the beginning of each chapter, there is a video worthy of a YouTube let’s talk. Travis and his colleague Bishop discuss popular culture topics, dropping reference after reference to anime, B series, Takashi Miike movies and Japanese rock. This is just a small sample of Suda speaking directly and openly about his tastes, something that extends to everything: to the plot, to a script with many unexpected twists, to the design of enemies, to the minigames, to the scenarios. 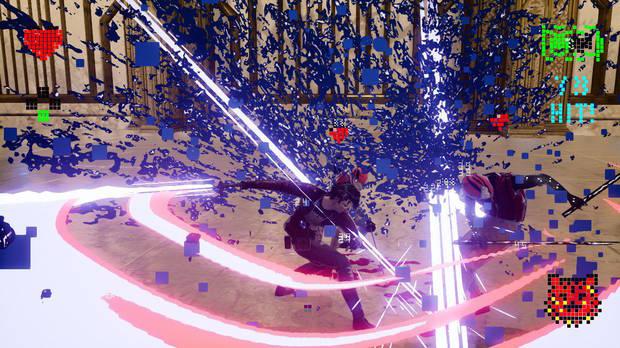 And the final bosses. As in the previous No More Heroes, they are the star of the show. They are characters with enough background to care and eccentric with great designs in most cases. Their confrontations, of course, are memorable. A brainstorming of crazy ideas that sometimes work great and sometimes worse overflow with creativity and constantly play with our expectations, both mechanically and visually.

The general plot of No More Heroes 3 is quite simple; Travis is defeating alien after alien to save the world. But that pulp, punk, humorous and extravagant tone of the previous installments is taken here to the umpteenth power. Any fan of Wii games is going to enjoy it and Suda is more aware of the times in which we live: the sexism of certain situations and some character designs here have less presence or are better managed. 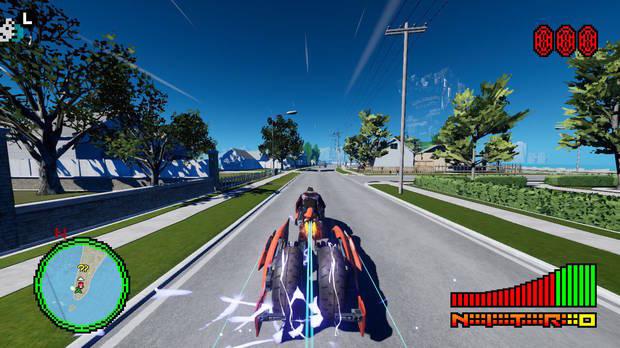 He has found the perfect tone,  after all, we’re talking about a game where we save the game by pooping, and the first time we do it here, Travis says he’s had too much beer, and his belly hurts. Of course, self-referentiality is constant and fundamental. Fret not, there is nothing complex to prevent you from enjoying this title even if you never played the previous ones.

After a more direct No More Heroes 2, the third part returns to its roots offering an open world. In total, the game offers five separate maps that are aesthetically different from one another. There are secondary missions, access battles, find parallel stories that unfold like in a comic from the 80s, and participate in many mini-games. Still, they are so desolate, so lifeless, like the Santa Destroy from the original game.

The structure of each chapter forces us, before facing the final boss, to participate in three battles scattered throughout each map. But even if we complete the minimum required, sometimes we will not get out of them with enough money to pay to face the boss. To fill our portfolio, we can participate in more optional combats, go-to defence missions (waves of combats and battles in space against huge aliens) and sign up for the minigames. 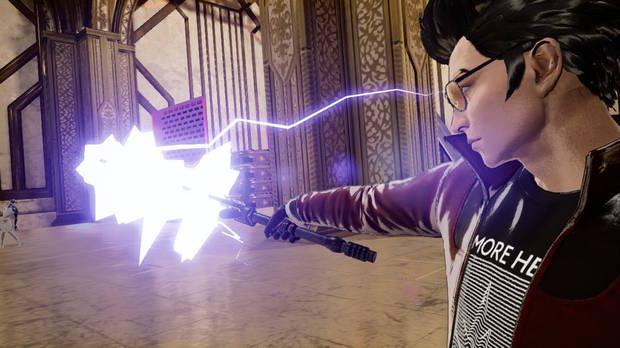 Of course, the minigames are as stupid as they are varied from unclogging toilets that we can later use to save the game from defending the coast from an attack by giant crocodiles shooting with a tank to mowing the lawn, collecting garbage, collecting minerals and more. They are not a great display of game design, of course, but the truth is that they sting to beat the scores in each of the three levels of difficulty. Again, if they are here, it is for the same reason that No More Heroes 3 exists: for grace.

Beyond the minigames, there are other commissions and secondary missions to fulfill throughout the open world. Of course, the absurd are their hallmark: collecting scorpions, destroying moai statues, repopulating all five trees. Zones and reach certain milestones in combat and collecting (we can get figures and other items for Travis’s house) to buy t-shirts for friendly aliens.

Obviously, do not expect a Bayonetta, a Devil May Cry or anything similar in-depth, but the combats are more fun, complex and spectacular battles than ever. Of course, in most final bosses, but above all, in the fights, we have to play before and in the more advanced defence missions.

The design of the enemies are well done. Some bosses can be taken down easily, and others will require more dodging their blows. Still, the range is wide: humanoid lizards that jump and become invisible, robots that drop bombs and shield themselves, aliens that fill the stage with energy balls and teleport, swordsmen that move at the speed of light… Also, some mini-bosses have various abilities and are tough. Although in the beginning, it is straightforward, little by little, the game mixes the enemies that appear in combat with finesse, and things get a bit complicated. 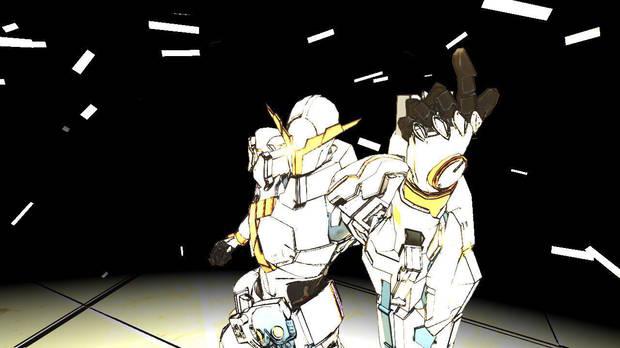 Travis has new aces up his sleeve. His laser katana, which has a battery we should be mindful of, and Travis’ wrestling movements (less varied than before, of course) are his main arsenal, and he once again has the roulette system that can grant us different power-ups and a lucky fury mechanic. But to this, we must add the Death Glove, an unprecedented system of abilities with which we can pounce on an enemy, create areas of slowdown or damage, and launch an unprotected enemy.

They are a handful of extra skills that, without revolutionizing the formula, give more depth to a satisfactory combat system and that is controlled very well: by the way, we recommend playing with a Joy-Con in each hand to make the movements of executions, fight free and so on, but it is also well controlled with the Pro controller or in handheld mode. 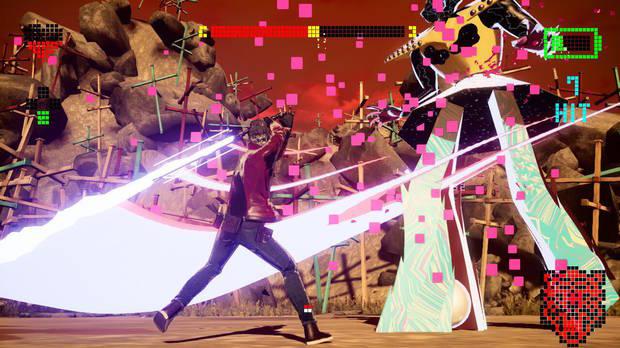 From the laboratory (where we can also replay the boss fights), Travis can create chips to equip himself to obtain passive statistical abilities; and access a recreational with which to increase your life or get a few new moves, among other things. As for the chips, as we can only equip three, they do not give enough customization to affect the gameplay except for some specific combinations. And as for the improvements, when we finished our game after 12 hours without being particularly complete, we had almost all of them unlocked, so more than a way of shaping Travis, it is perceived as an empty system.

No More Heroes 3 takes its eccentricity to the visual as well. We are not just talking about characters with crazy designs or scenarios. We talk about how he is constantly playing with his style, with the art shown to us on screen. It is very original, also in the soundtrack, to the point that it is rarely seen in a video game. 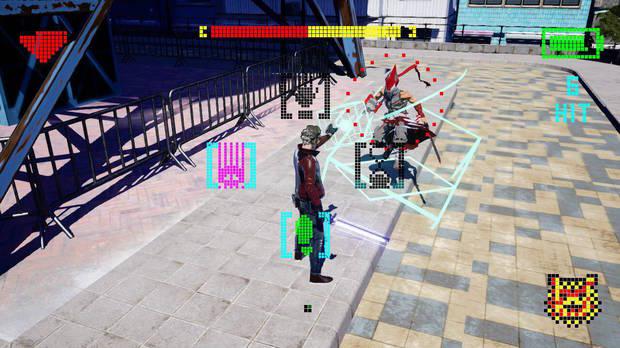 But that contrasts with the technical. The least painful, but without diminishing it, is in the visual detail: the textures of the enemies, the characters that are not important and the environment, in general, are very poor, not so different from those of the Wii games. What really matters is performance. Moving through the open world is dramatic: to the uncontrollable motorbike and hallmark of the saga, the very low frame rate is added. 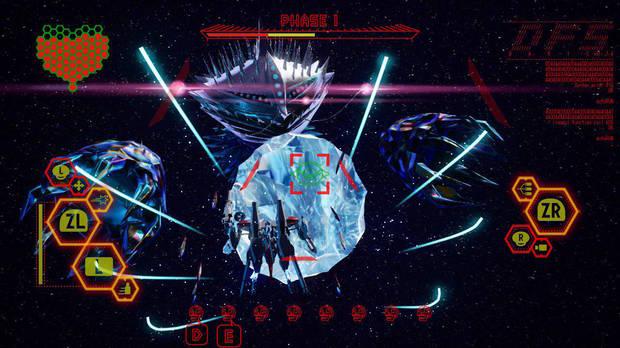 That does not affect the gameplay too much because nothing requires us to be precise and fast driving beyond our time. What does affect is the popping of textures and objects, which in addition to making us look ugly, prevents us from seeing items in far distance because they have not loaded. What does affect us is that bugs forced us to restart the game and have prevented us from trying a racing minigame. What does affect is that the collision system with the motorcycle is chaotic. Luckily, in the most important thing, it works perfectly: the combats are fluid and at no time have they given us problems.

No More Heroes 3 is a game made by and for the fan. Suda 51 is recreated as a title that exudes creativity, referentiality, self-referentiality, and a particular sense of humour. Fans of the series will cherish this new game and a must-have title for the Switch. Expect to be stunned, although positively or negatively, depending on the case. There will be those who will look out for bugs and glitches. In contrast, others will be able to ignore them, allowing themselves to be completely immersed in Suda51’s world.

We prepared this review with a digital review copy for the game provided by Nintendo.