Pixel Ripped 1989 is a title that’s wanting to recover the essence of Game Boy games, and above all, the feeling of playing anywhere. The ultimate question is, how could you create an outstanding experience that recreates that feeling of never leaving our games? With Virtual Reality, developers aim to mix the latest technology with the nostalgia of this mythical handheld console. Ready to go back to 1989 for an unforgettable adventure, we then fasten your seatbelts!


Pixel Ripped 1989 lets you pick one of two characters; Dot and Nicola. Dot is the heroine of the game that gives the title its name, and after recovering the Pixel Stone, she has restored peace to her kingdom. Unfortunately, the bad guy on duty has taken the stone, with which he can summon an entire army of enemies, and worse, travel between dimensions. The only way to stop his feet is with the help of Nicola, a young woman who has the highest score in the title. Nicole will have to complete the game, and otherwise, the evil one will begin to affect our reality to take control of it too. Yes, the story sounds silly, but trust us, it is tremendously fun, full of ingenious dialogues, references to the video game era of the late 80s and early 90s, etc. We have a Gameboy like a handheld console in our hands called Gear Kid, which is a DualShock in the case of PS4, we can move next to the control, which gives a very immersive feeling of actually holding a Gameboy in our hand. The situation proposed by  Pixel Ripped 1989 is quite urgent, so Nicola will have to complete the game now … Although we are currently in a classroom. So, our task will be to help Dot defeat evil without the evil teacher catching us and punishing us by taking our Gameboy, aka Gear Kid away. Still, sounds silly? Yeah, it may, but it’s also beautiful. 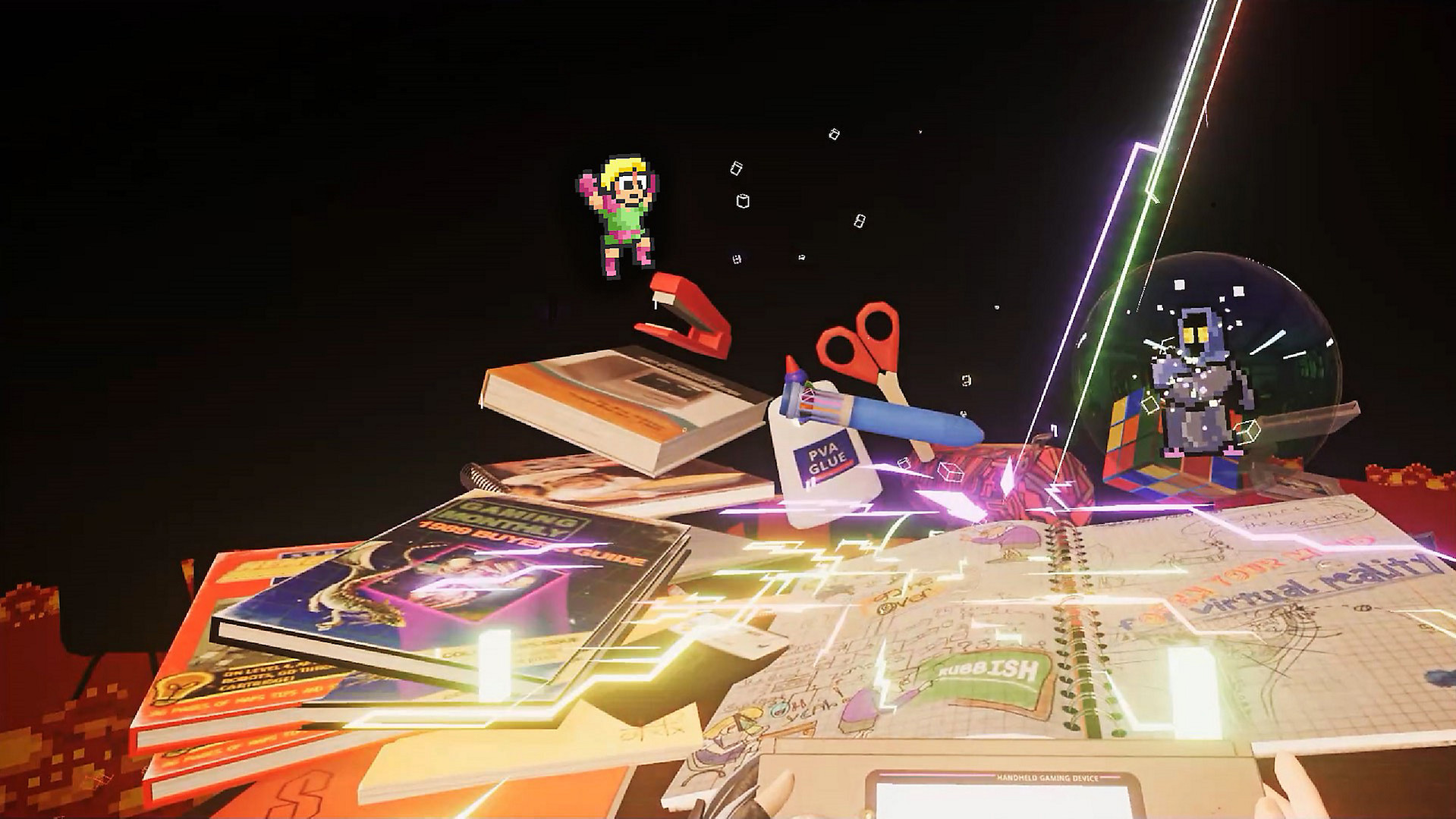 The Gear Kid game could be considered a kind of Mega Man, with touches of the X saga, since we can run to increase our speed while we shoot. There are several sections that are apparent tributes, as with cubes that appear and disappear at specific intervals, and should be used as platforms. However, our health is similar to that of Sonic since, upon receiving an impact, we will lose all the pixels we have obtained. This will return us to an utterly square shape, while if we get more pixels, we will gain definition. The game as such is pretty cool, offering four varied levels with super fun challenges, and tons of secret ways to find the cartridges, the collectibles of the adventure. If  Pixel Ripped 1989 were just this, we would be looking at an excellent and fun platform title, but what elevates it is when combined with Nicola’s experience. The teacher will try to teach her lesson, so we will have to play when she is writing something on the board while we are bored with the story of Henry VIII. When he turns, it will be time to stop playing and look at the teacher, so that it seems that we are attending. The game does not end, so if we have left Dot on a platform that disappears, when we look at the Gear Kid again, we will see how we have returned to the last control point. In class, we can use a straw to throw paper balls and cause distractions. 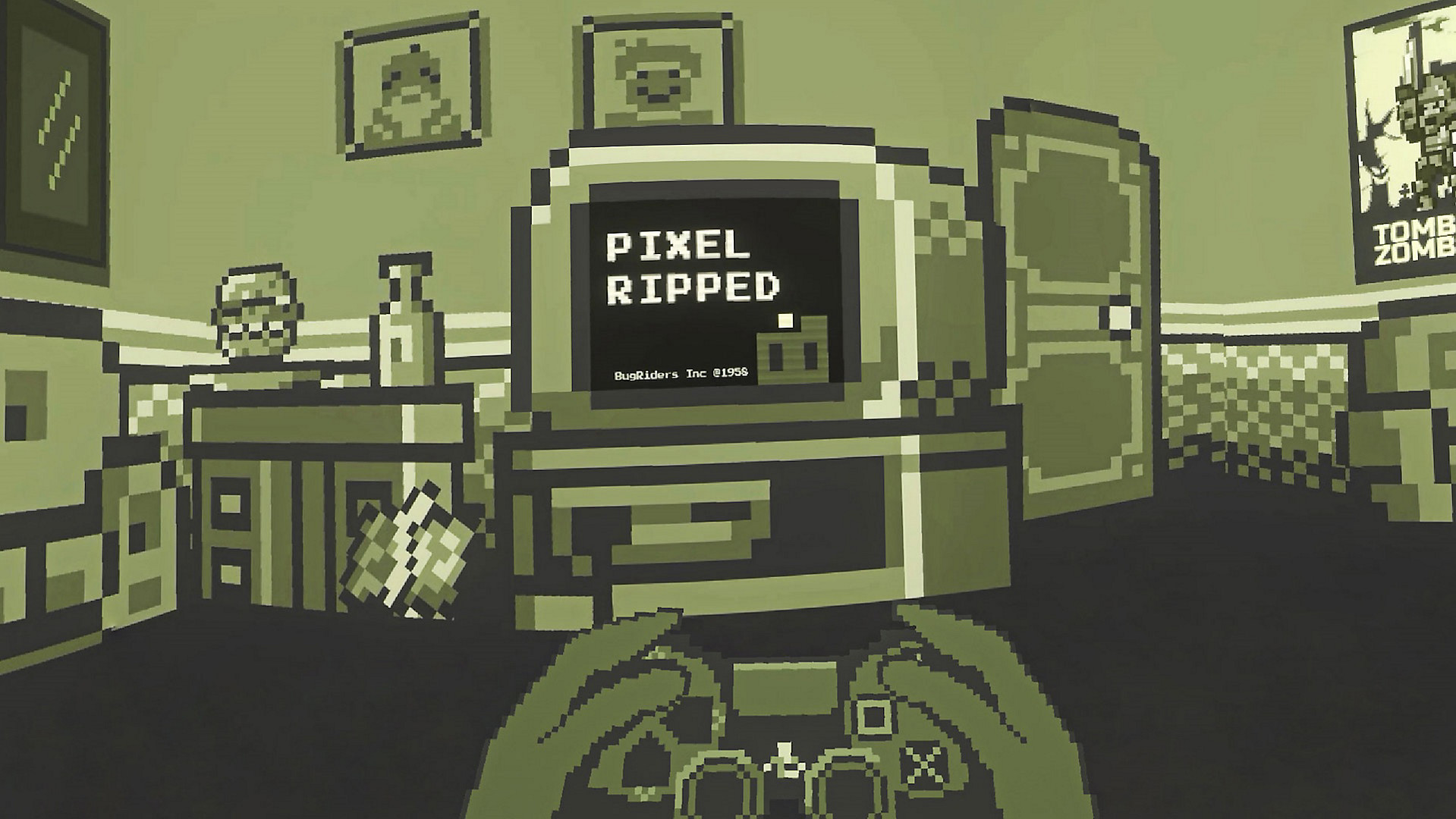 We can also throw the lunch boxes of the students, turn on the radio so that music starts playing, activate the projector with a mocking image of the teacher and many others that you should discover. The good thing is that they are incredibly absurd distractions that make you laugh out loud the first time you activate them and keep you smiling from ear to ear at all times. This dynamic of playing looking towards the console, while we keep an eye on the teacher not catching us, is brilliant, and works like a charm. In fact, on the Gear Kid, we do not have lives, but the game Over is achieved if the teacher catches us three times. This does not penalize us if we die to stop playing so that we are not caught, which avoids possible frustrations. As if this mix of dynamics were not enough,  Pixel Ripped 1989 combines the real world and that of the video game for the final encounters of each phase. As an example of the first level, the characters will come out of the Gear Kid, so now they will have colour, and the stage will be formed by the elements that we had on the table. Now the staplers will be the springboards, while the scissors are the spikes. This is fun, but on top, we have to use the straw to throw balls and destroy bubbles, so both interactive mechanics are combined in a brilliant way.

I do not want to tell much more, since in each phase  Pixel Ripped 1989 manages to give a twist to the mechanics seen both in the game and in the real world, and above all, in these final encounters. The game does not stop surprising us, offering imaginative and very, very fun encounters. The feeling of immersion is very successful since if we look at the scenarios, we can find lots of clues to find secrets, jokes and/or references, etc. Again, it is a pity that everything is in English since if the language is not controlled, we will miss many interesting things, which makes the game a little less enjoyable. 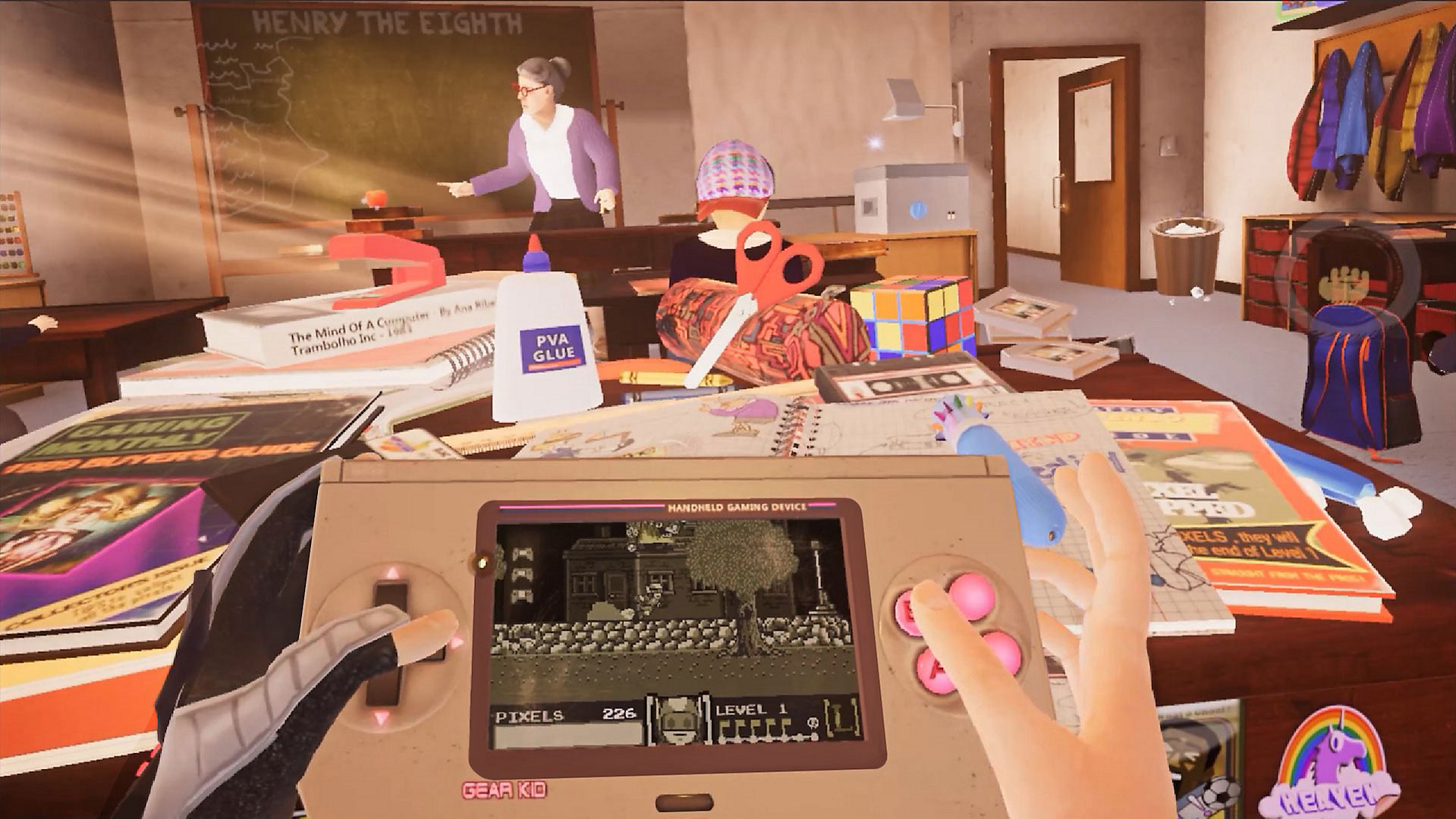 The truth is that  Pixel Ripped 1989 is simply great, but it has an aspect that does not convince more than one: its four levels have lasted approximately 3-4 hours. We are not facing a very long game, but it is quite replayable while we look for all the hidden cartridges (some are very well hidden), and the truth is that this ensures that we have an adventure that takes advantage until the last minute. Even the credits are brilliant, giving rise to possible installments that will continue to explore more times of video games. If you look at the technical section,  Pixel Ripped 1989 works wonders. On the one hand, the work of pixel art is very successful, offering an aesthetic very typical of the time, but with a resolution and animation work more typical of today. What is most striking is the part of the real world, offering worked graphics, but with improvable aspects. For example, the saw teeth are quite noticeable in the PS4 version, in addition to missing shadows and presenting some somewhat flat textures. Still, the dive is very, very accomplished, with just fantastic details. I love that when we on the controller press the crosshead, Nicola does it too, and the same with the action buttons. This makes us forget these little graphic problems, especially because of how visually striking the final bosses are. 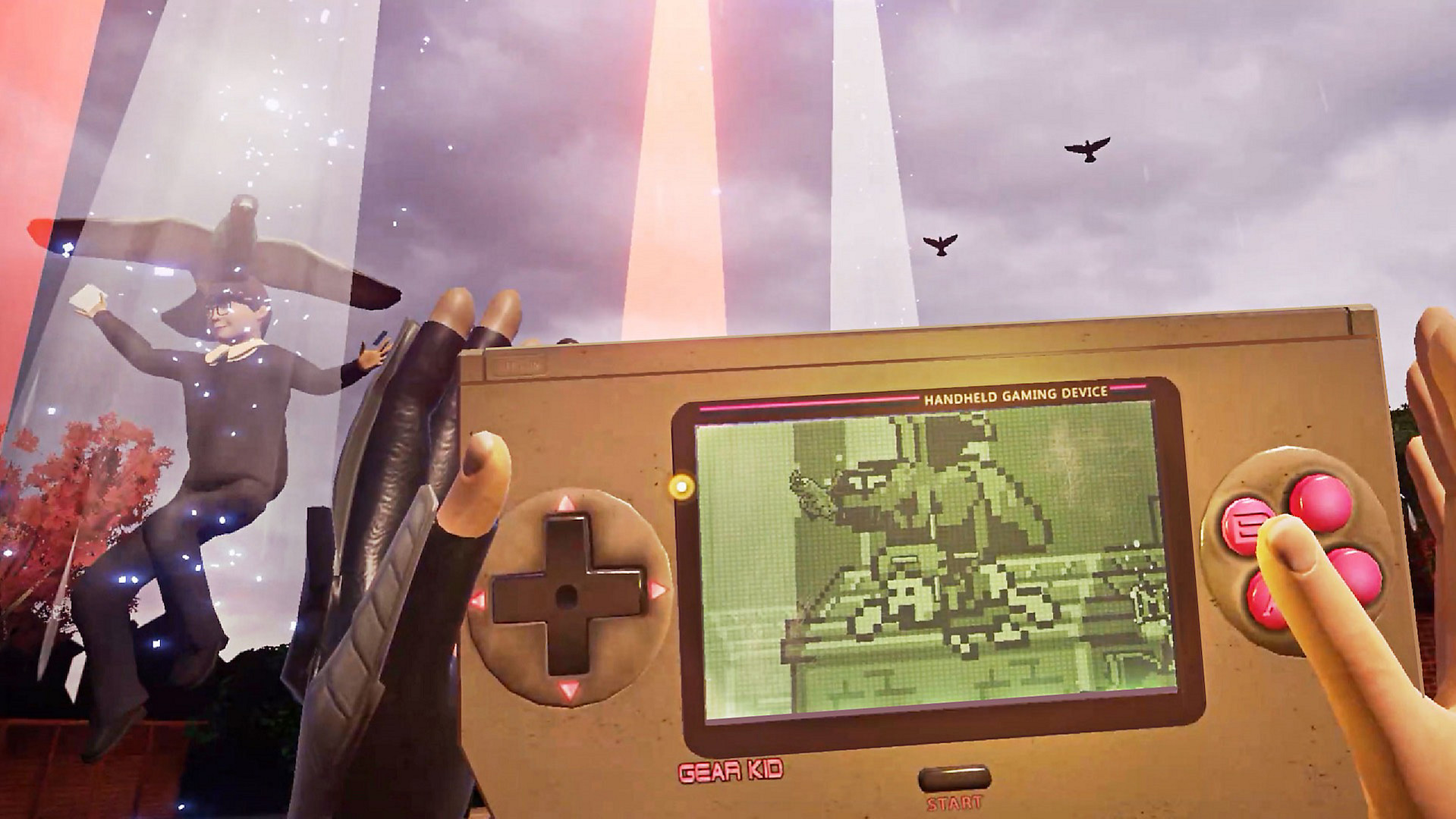 Sound is even better than graphics, combining both in-game and real-world audio. This has been done very effectively to increase immersion, and it is most noticeable when we look at the Gear Kid or the class. Depending on what we focus on, that audio gains volume, but without completely cancelling the other one. This can help us to listen to the blows that the teacher hits with a ruler on the table to give us a warning, and thus stop playing and not lose a “life.” The music of the game is great, and the voices of the humans work very well, with exaggerations that marry this world so absurd and crazy that they propose to us. 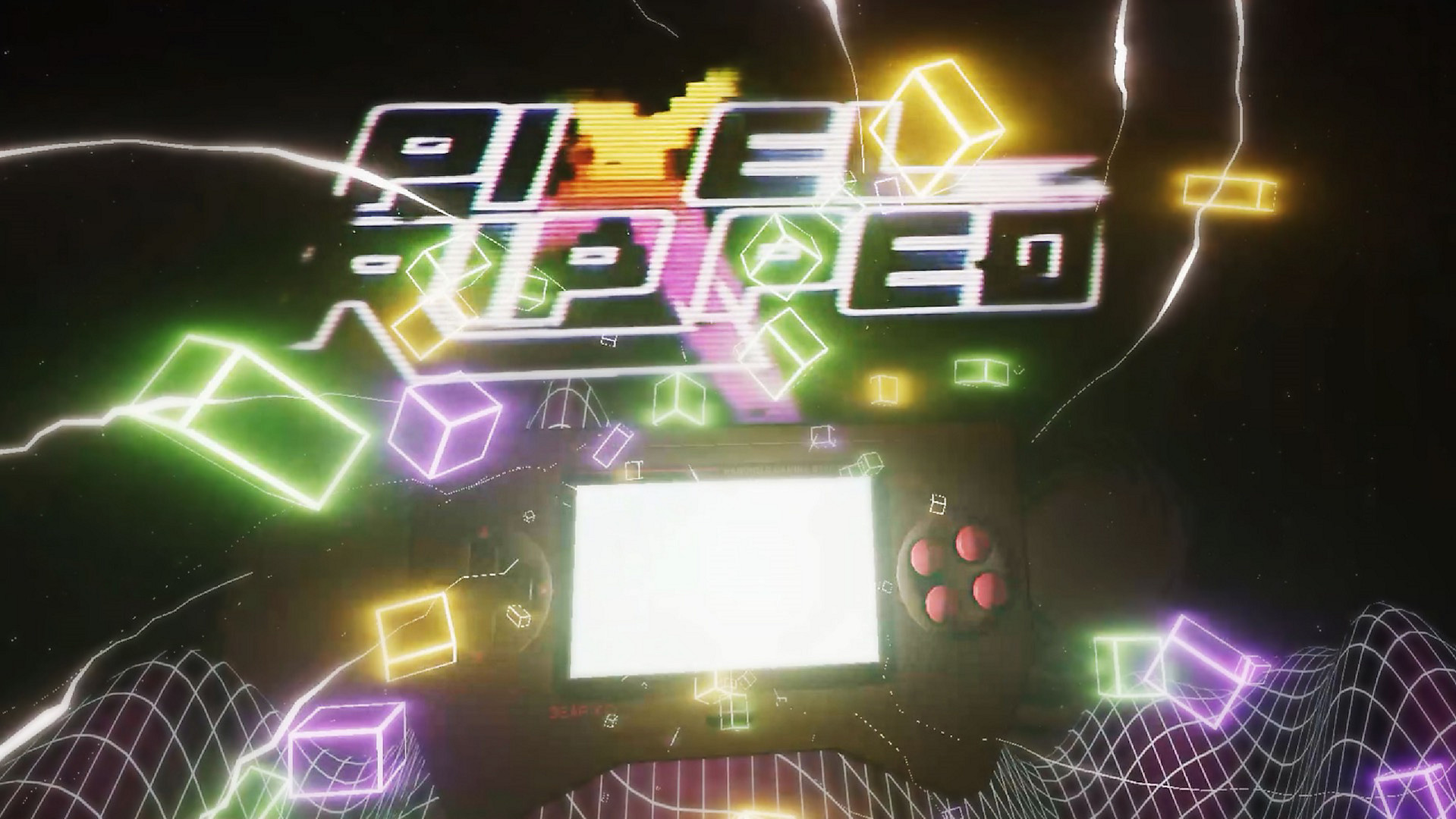 Pixel Ripped 1989  is a fantastic Virtual Reality title that should be played by every owner of a VR capable system. We are facing a game that is simply brilliant in its approach since it achieves something that may seem impossible: using the latest technologies to offer a nostalgic experience within the game and the “real world” that we access through VR. The duality of controlling Nicola, who in turn controls Dot, is fantastic, offering a unique and innovative title, which demonstrates the great experiences that can only be achieved thanks to Virtual Reality.

The good thing is that it is not only the brilliant idea proposed by  Pixel Ripped 1989, but it executes it perfectly. The game Nicola plays is very good as such, but by combining this duality, reaching its maximum expression in the final levels, which are incredible. We highly recommend Pixel Ripped 1989 to any owner of a Virtual Reality device.