One of the games that I remember most from my childhood when I went to the arcade as Puzzle Bobble. That’s where I met the adorable little dragons, and not from their original game, because, for me, there was only the game where you could throw bubbles to break the others before they crush us. Much has happened since then, and if there is a way to take classic formulas and twist them and play classic 2d games in 3d, for the sake of it, just look at Mario in Mario’s Odessey.


After all, playing in 2D is not the same as moving to a first-person perspective in 3D. Will the mechanics work so well? Can the adorableness of the original game be maintained? That is what we have to find out with Puzzle Bobble 3D: Vacation Odyssey, the new Survios title takes the classic 2D experience and gives it a spin in all 3D glory. So grab your ball shooter, which plays pop bubbles like there is no tomorrow.

Unlike in Tetris Effect, here we are not adapting traditional mechanics to “only” offer a visual spectacle enhanced by 3D. Still, the entire game design has been thought to work to play in a 3D space. To start, we control the little dragon Bub, who will have to complete 100 levels with Bob to complete the story. Not that there is a plot, beyond a few images every few levels that are as adorable as the characters themselves. 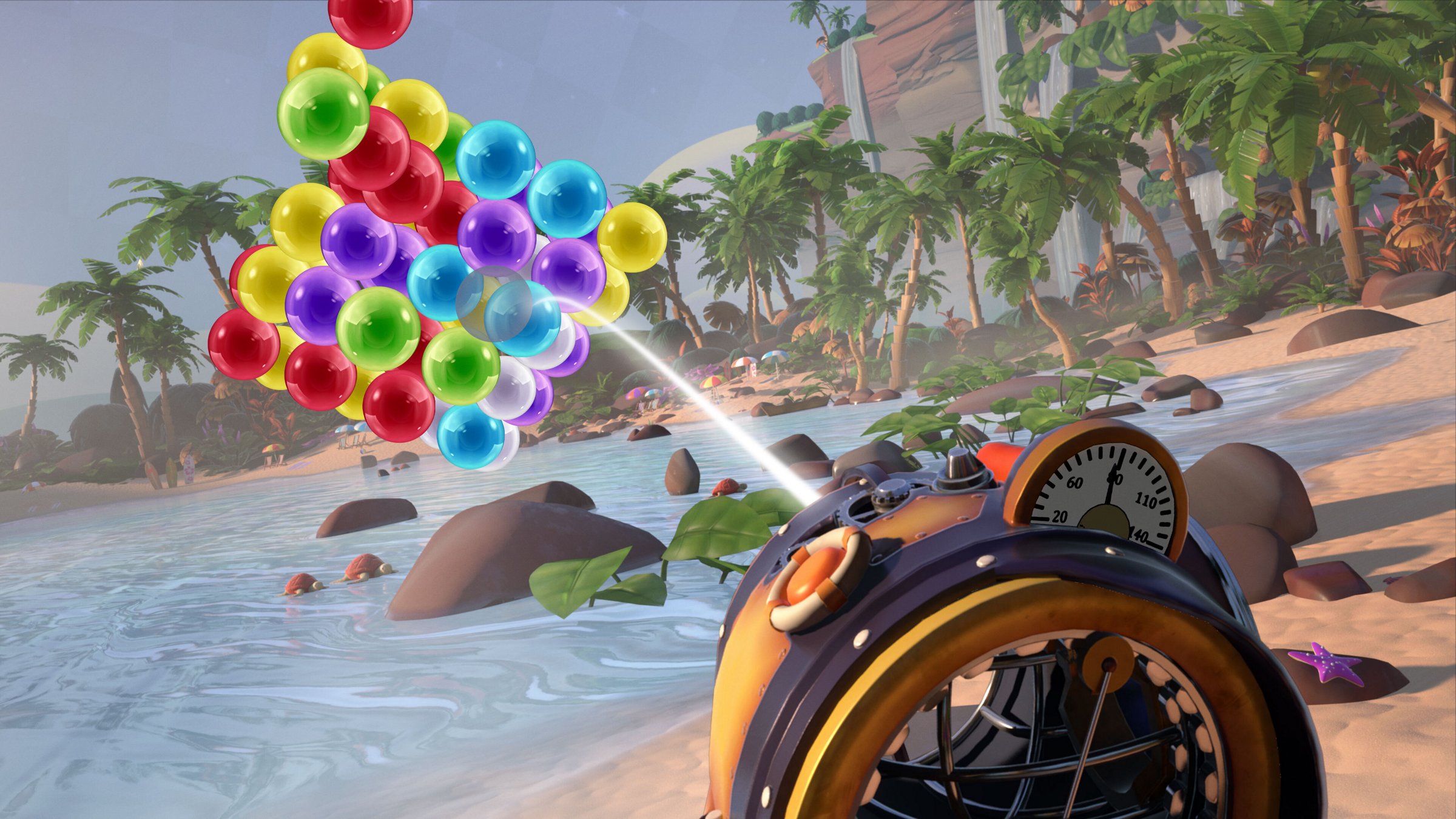 In general, the aesthetics and magic of Taito’s work have been perfectly maintained, adapting everything very well to the three dimensions and the new perspective. Saying hello to Bob is just great, as is seeing the colourful scenes we’ll be moving through.

In terms of mechanics, the idea behind Puzzle Bobble 3D: Vacation Odyssey is precisely the same as in the original game. So, our goal is to pop bubbles by launching others, something we will do with a slingshot pistol. The control works very well, seeing where each ball will land and which ones will be stuck so that it can affect them and explode or not.

So we aim directly, and the other big difference is that the set of balls to destroy is forming 3D structures. After each shot, the structure will rotate in the direction where we have shot, so to the classical mechanics, the new perspective and the involved strategy of the turn is added. It may sound simple, but it makes it work incredibly well in Virtual Reality to make it both similar and unique. 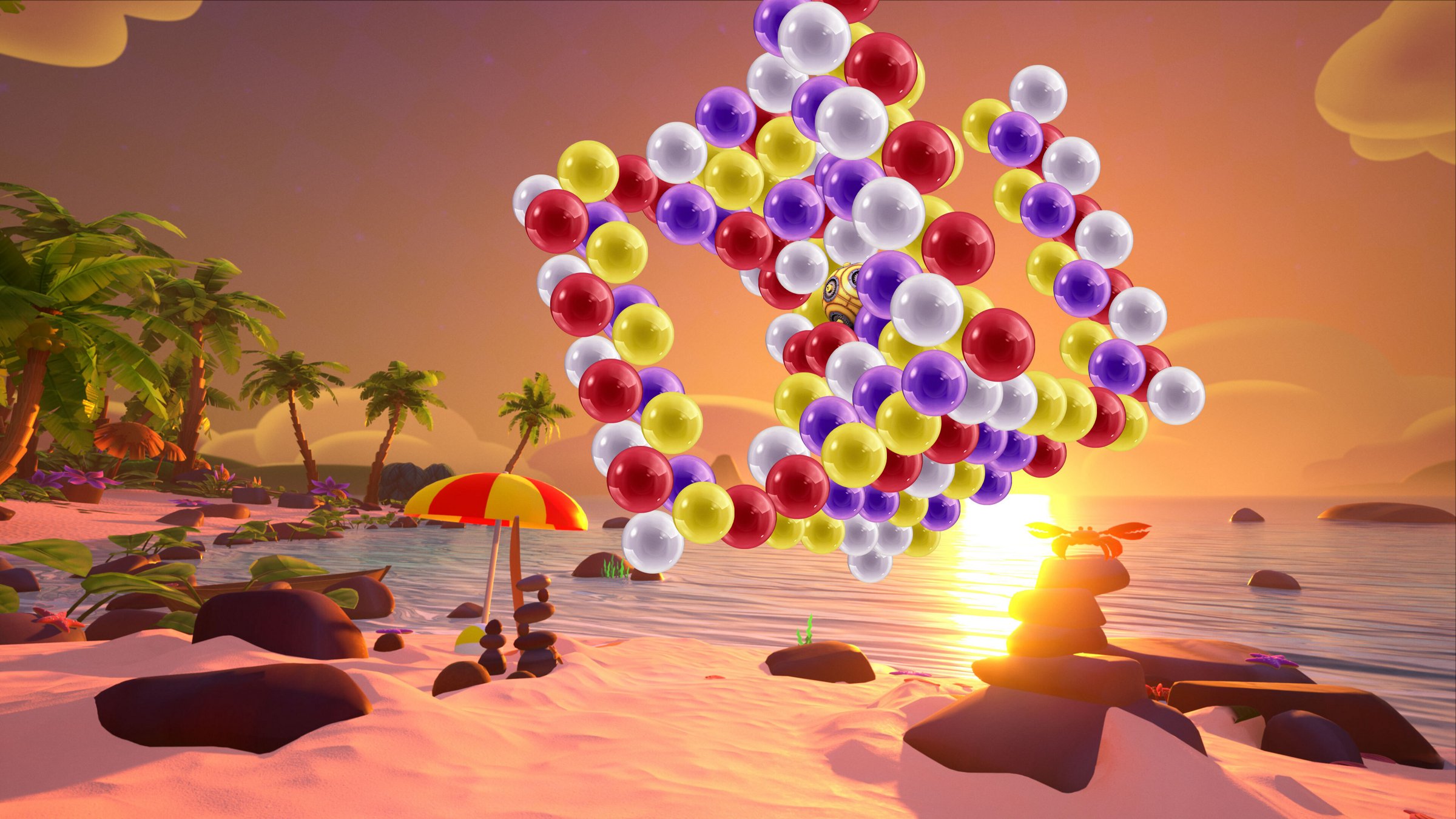 Also, Puzzle Bobble 3D: Vacation Odyssey offers a perfect learning curve. The first levels are very, very simple to get used to these twists on the classical mechanics. At first, I was shooting a little more haphazardly, but little by little, I saw better which bubbles to hit to make fall from the ones I was holding onto and how to take advantage of the turn so that the next shots would benefit me. It is a tactical and Puzzle layer that I did not expect, but that made each new level a joy.

The game often introduces new mechanics, such as unique balls that are harmful if we break them directly, others that explode all the balls of the colour with which we shoot, structures that move or rotate on their own, etc. Even alternative ways of completing the levels are added, which expands the possibilities and strategies to achieve a higher score. We can even use power-ups that we buy with the coins (won at an almost laughable rate, yes), such as a bomb or something to change the colour of the balls, which can save us in a puzzle that resists us. 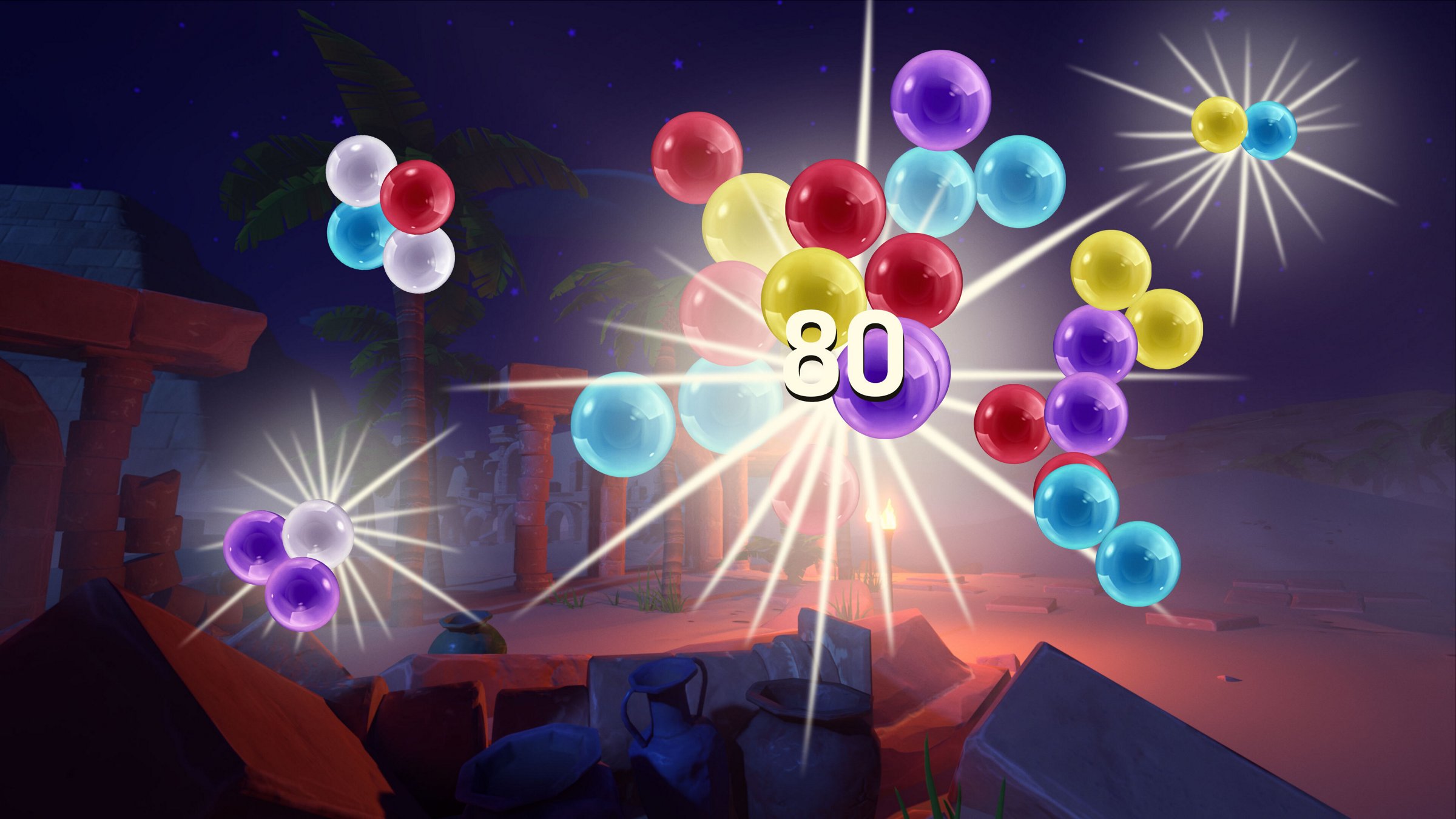 The result is a campaign mode that can easily last 4-5 hours, encouraging us to play to see what surprises the following levels hide constantly. Along with this mode, we have an Infinite way where we have to burst as many balls as possible before the platforms where they are held go through a crack. As in the campaign, the mode starts quiet, but then Puzzle Bobble 3D: Vacation Odyssey becomes incredibly frantic, having to think, aim and shoot quickly.

The third mode in discord is 1v1 multiplayer, which also works very well. As in the classic games, when we destroy bubbles, we will send “garbage” to the opponent to see who is the one who is left standing at the end. The games work well, although there is no voice chat of any kind, and it isn’t easy to find games. So, unless you find a user and meet him directly, it won’t be easy to test it. 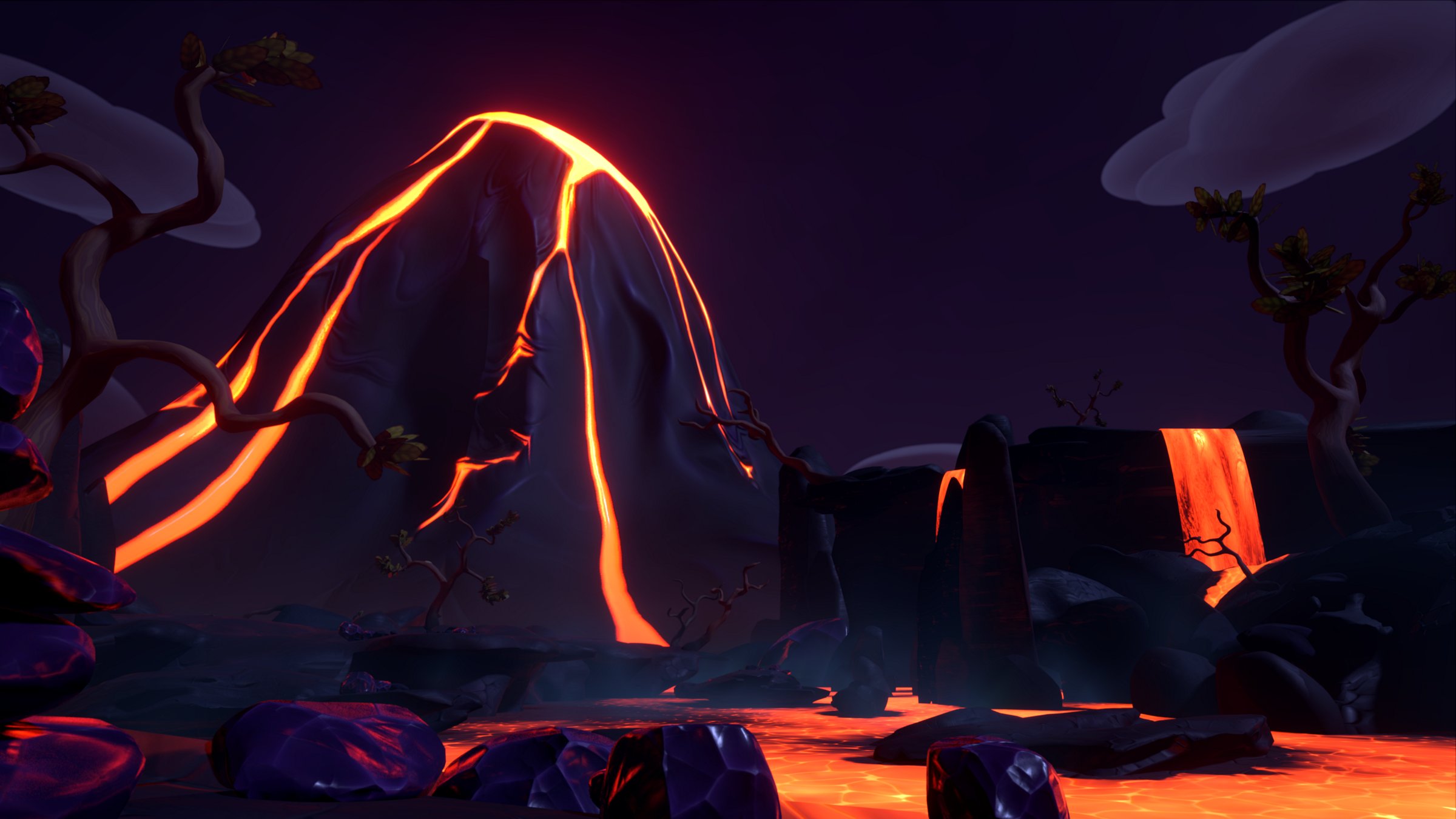 Puzzle Bobble 3D: Vacation Odyssey works very well in all its modes, but the game is indeed a bit rogue in terms of precision. A slight movement of the hand when shooting, and we will send the bubble to a different position than we wanted. If we are precise and have a good pulse, it will not happen, but it is something to keep in mind, which can be very pleasant.

Visually, Survios has done a great job bringing the colourful world of the franchise to 3D. The feeling of being in front of a gigantic mass of bubbles in the levels is excellent, as are the scenarios. We will visit tropical beaches with beautiful sunsets, ruins in deserts or even volcanoes, so there is a lot of variety in that regard. The sound is also excellent, thanks to some lovely melodies … But they can be somewhat repetitive in long sessions. More musical variety would not have hurt the game at all, without a doubt. 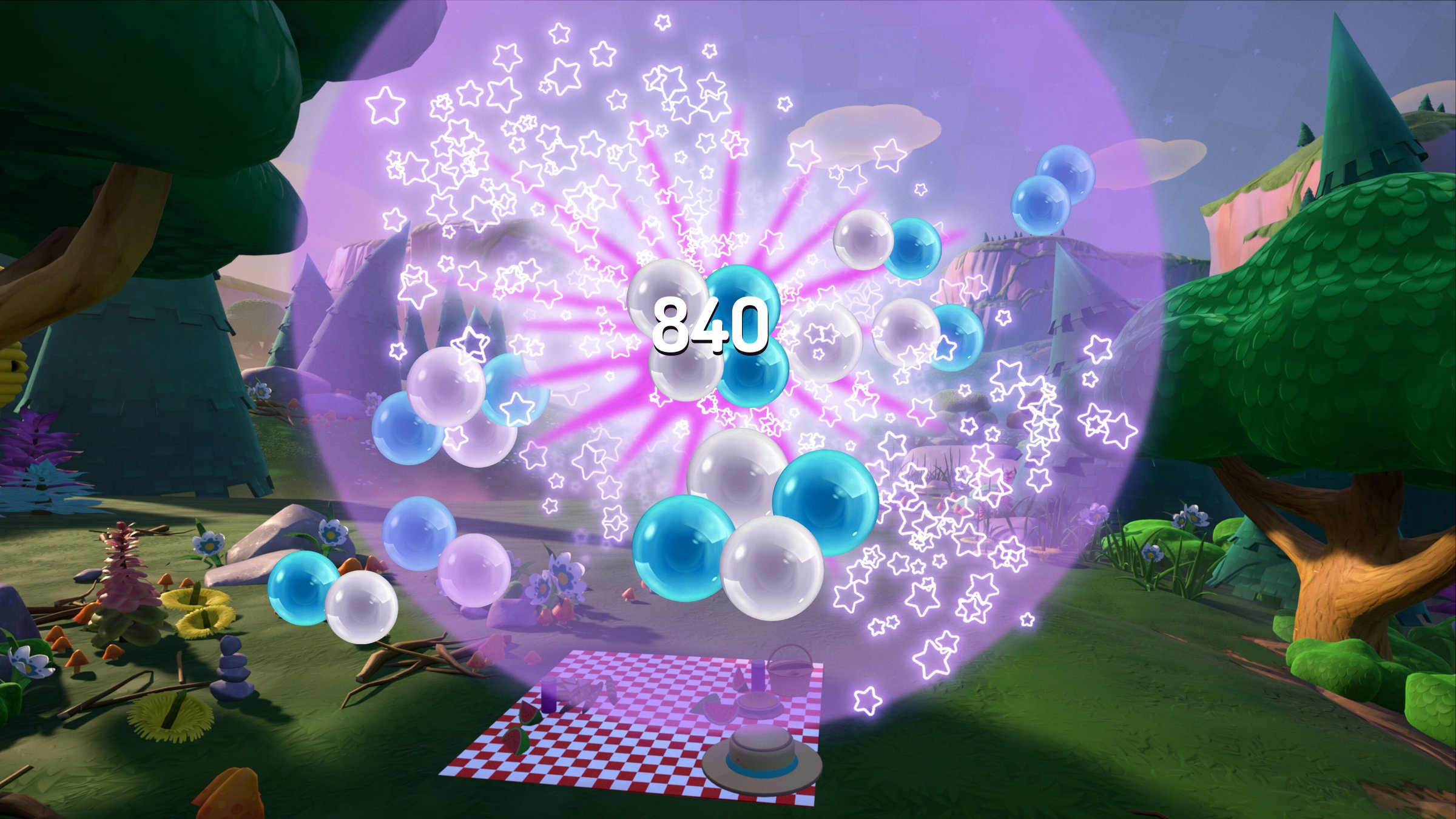 This Puzzle Bobble 3D: Vacation Odyssey is just what I wanted: a Puzzle Bobble as fun and addictive as ever. There is neither cheat nor cardboard in that sense since the game is as “simple” as it once was, but that is not bad at all.

The changes they have made to adapt the mechanics are significant, giving it an extra layer of depth between the 3D perspective and the rotation of the platforms where the bubbles are. When you add this to the excellent level design, its variety and how well everything works, it is easy to get hooked and fall asleep like in arcades more than two decades ago.

If you are looking for a more complex game or with a narrative, you will not find it, but it does not intend it either. If you want to relive this great series in a completely new way, Puzzle Bobble 3D: Vacation Odyssey is not going to disappoint you in the least.