Demonstrator or police? Pick your side in this strategy game.

The political and social landscape has changed drastically in the last decade. The economic crisis, the new movements, the ease of launching messages in networks, the parties with new demands … there are many countries all over the world that have experienced their internal tensions. Riot – Civil Unrest is a game inspired by this part of modern history, and although it is a bit short on playable aspects, it touches on a theme that may not relate to all gamers.


The origin of the project starts in 2012, when Leonard Menchiari, former editor of Valve, participated in protests in northern Italy against the construction of a highway that threatened the nature of the landscape. This experience served for the now director of Riot to experience the confrontations in the first person, from within the demonstrations. After a campaign in Indiegogo in 2014 to materialize his idea, the game has been a long season gone, until in 2017 he debuted in the Advance Access Steam, and now it is officially launched.

As can be deduced from the Riot images, this is a real-time strategy game in which two sides face a situation based on real events: the police and the demonstrators. And we must begin by pointing out a positive aspect of its creator, which is the attempt not to demonize the forces of order; Yes, an initial explanation summarizes the reasons for the revolt in each case and it is inevitable to feel inclined by the motivations of the people who have broken out, but in Riot we can also control the police in their eagerness to prevent a peaceful sit-down from arising in a chaos 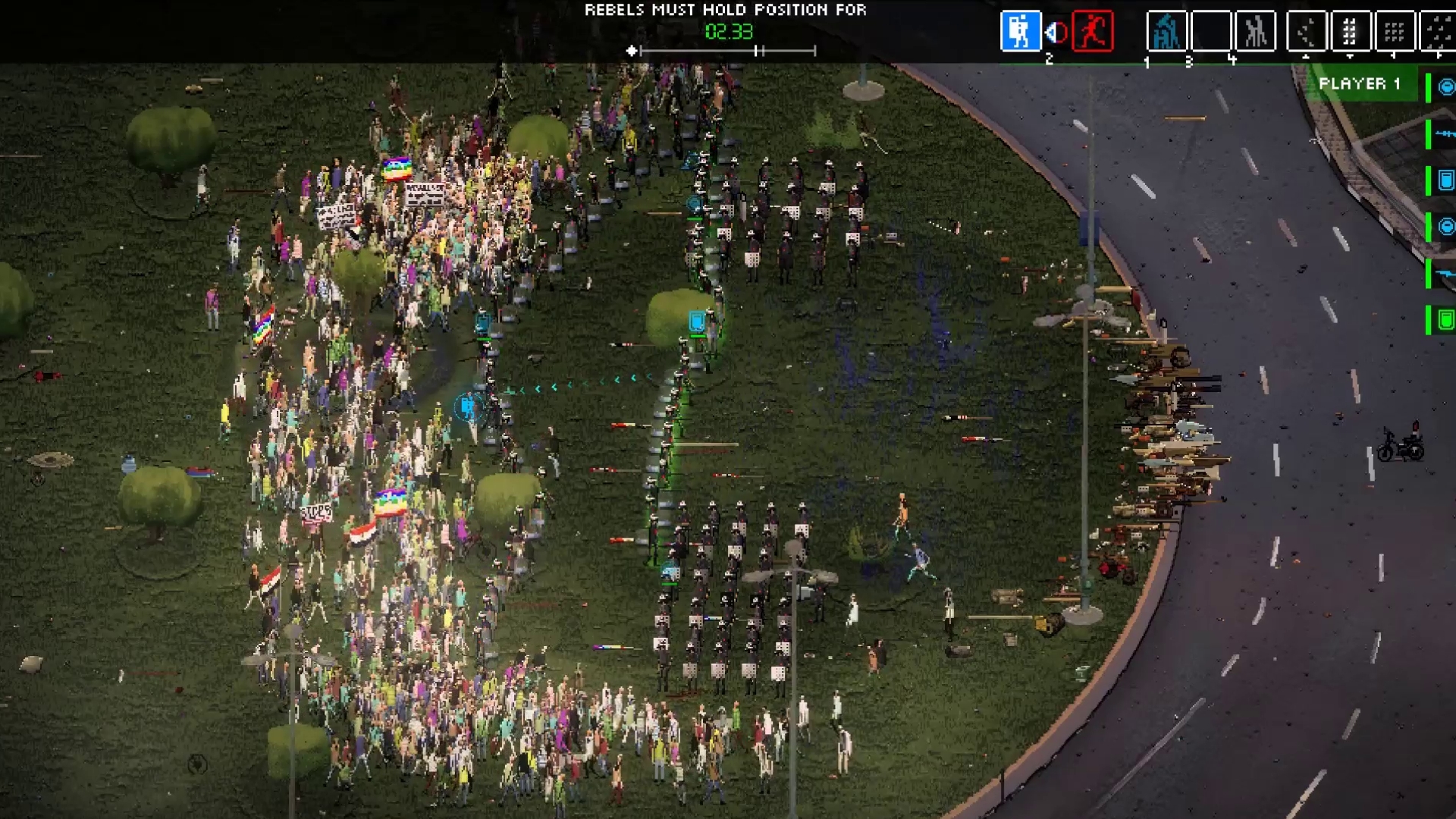 We have three main modes, a versus-versus IA or other players in the local one-one focused on global conflicts and one in the stories of each of the four countries featured in the game: Spain -The outraged-, Italy -No TAV-, Greece -Keratea- and Egypt -Primavera Arab-. Complete the four or five phases of each takes about 30 minutes, but then can be repeated from the opposite side-with opposite missions, so it is replayable. Basically, if the protesters are camped in the demonstration area their objective is to remain in the area, and the police to vacate the area; in conflicts, a series of tents must be protected, while the police must remove the camp; In other cities the protesters want to move to a certain area and the police prevent them from crossing the barrier.

More interesting is the main mode, which reviews globally these same events but connected one after the other. Instead of playing loose phases here we must take into account more factors: we can achieve a military victory but not politics, and that bad press of public opinion will give advantages to the rival side in the next event. Maybe confronting the police or firing rubber balls at the tumult is an effective and quick solution, but if the numbers of wounded are high we run the risk of suffering later because the population will see us as “the bad guys” in this story.

As for the gameplay, with both sides what we have are groups of characters divided by classes with a series of skills or different actions. In the police, it is obvious: tactical unit, assault, ballistics … Their values of defence, quantity and armament offer different strategies. There are soldiers ready to charge in groups who strike at close range with batons and are able to enter fully into a demonstration, while others fire smoke bombs or non-lethal projectiles. Before the game, we can edit some parameters of these cops. 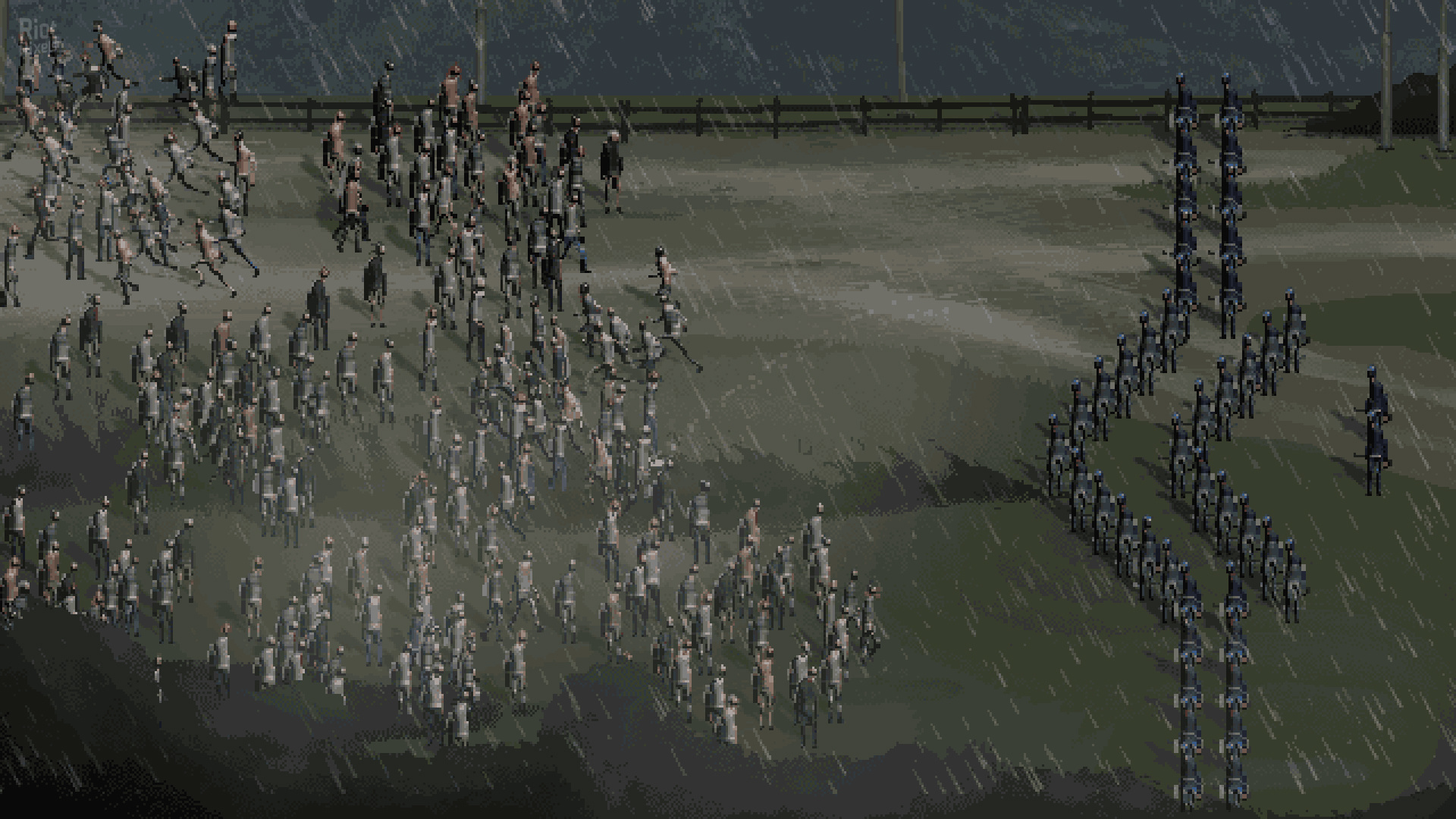 The protesters have characters that represent the most leader, with a megaphone to communicate messages that raise the spirits of their peers and perform acts of peaceful resistance, but also more violent groups that provoke or throw stones. Like the police, we can give orders to act frontally or to stay in defensive mode to protect the positions and that nobody flee in terror.

The idea of the game is, therefore, that within a time limit, each side meets its objective. The police can make arrests or displace their vehicles, the demonstrators set fire to the barricades or use social networks to tip the balance to their purpose. Our progress will unlock weapons and special characters – with characteristics of resistance and “aura” radius that influences colleagues. 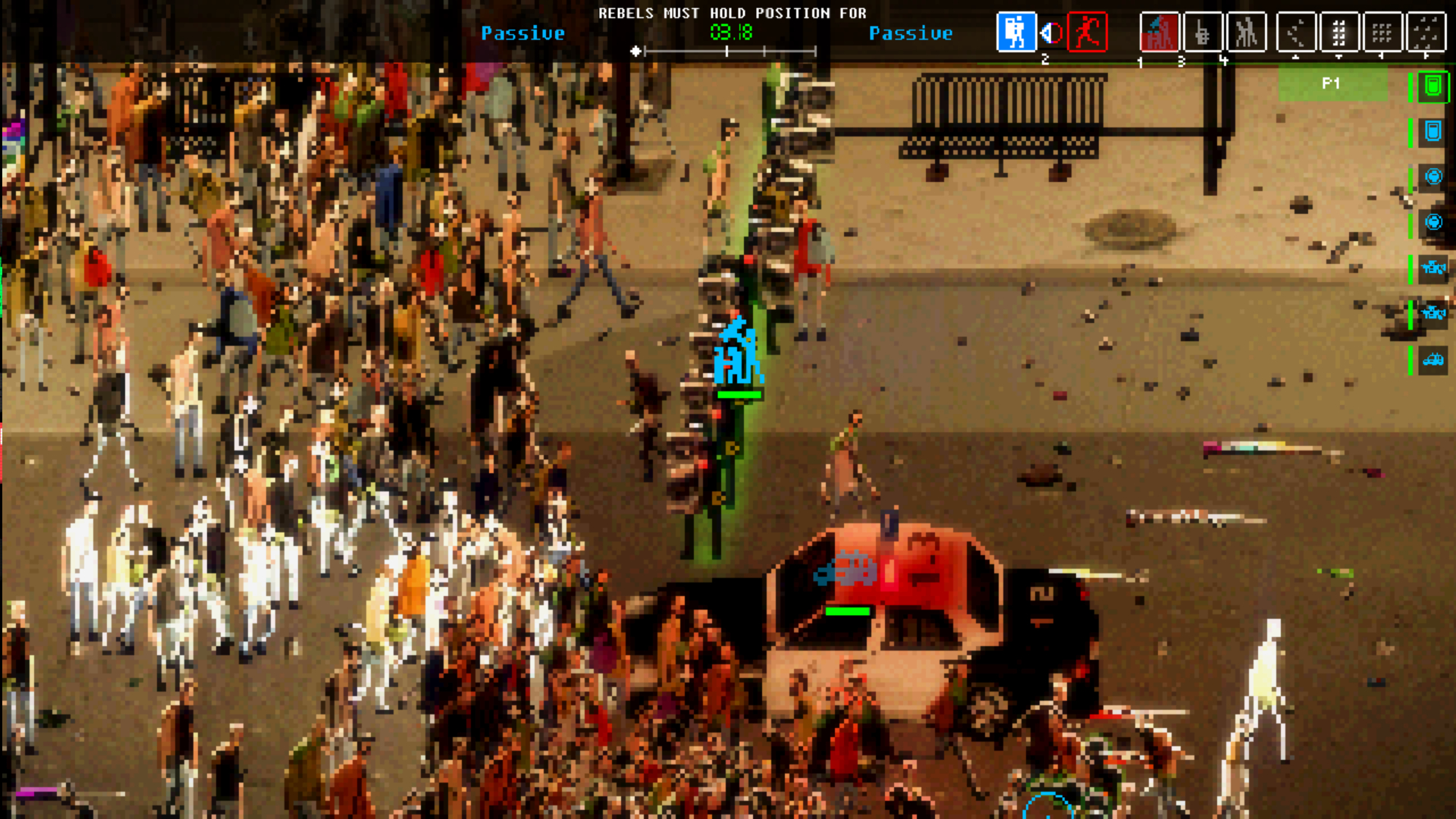 The idea of Riot must be recognized that it is quite original and adapts well to the genre of strategy. There is always a small dose of unpredictability, which is normal given that on the screen we have numerous units acting in a system of action and reaction, where a smoke bomb can cause the opposite effect to the one we want -variances of the protesters-. Choose the side you choose, you will feel the tension of the scenes as the minutes pass and you have not achieved the mission.

What’s wrong with Riot – Civil Unrest so we do not get as excited as we should? The most serious is the little intuitive that is in general, both for its interface and control and for the absence of tutorials that better explain the advantages and disadvantages of each action. In addition, the units are usually quite passive, and there are times when you have managed to take an area minutes before the limit and the opposing side will not do much to recover it; Basically, just let time pass. 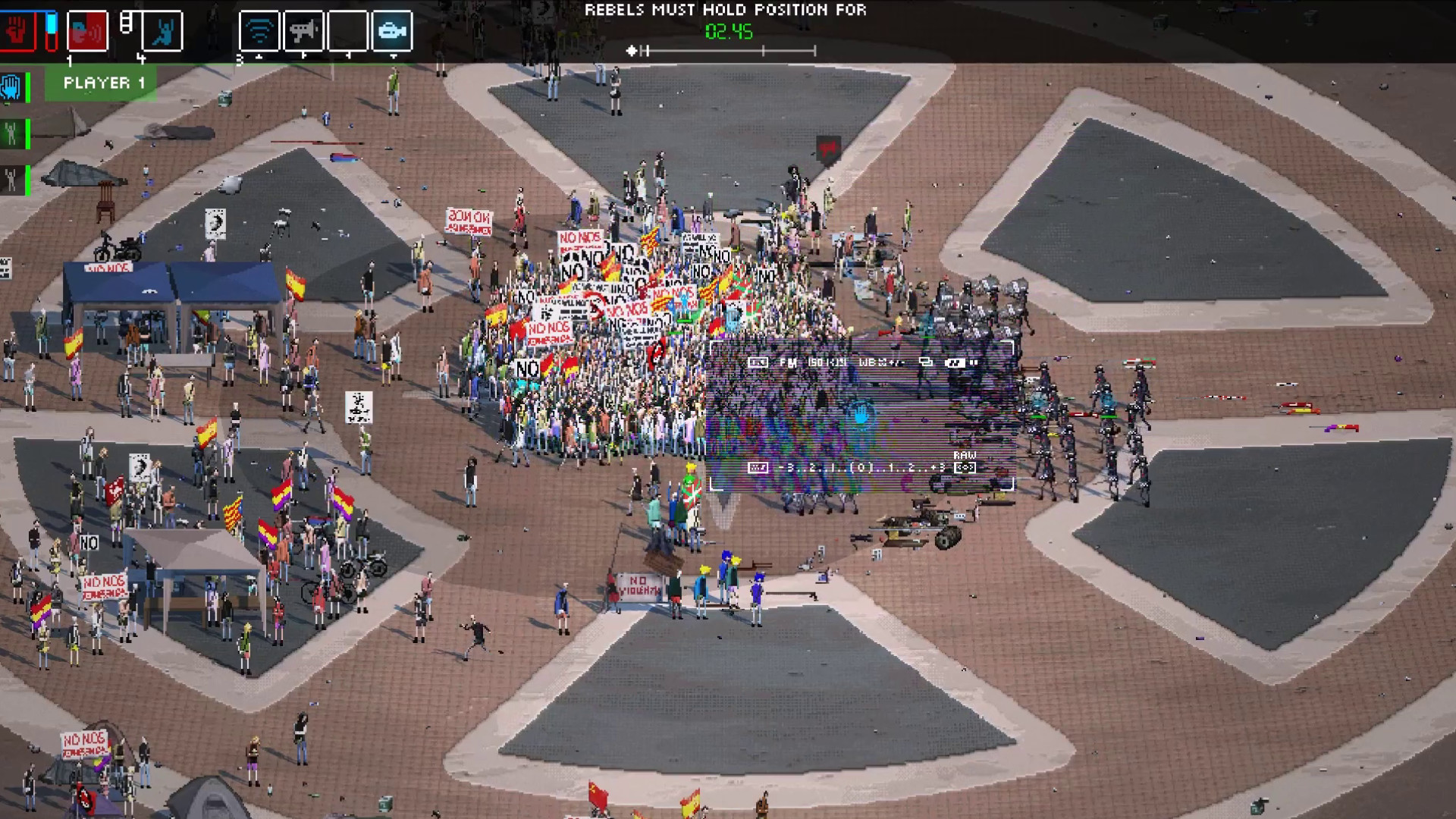 Many of the missions are practically the same – defence or capture of zones – but with different scenery, so it is inevitable that something repetitive is done. It is also a bit unbalanced – although it may be intentional – because normally playing as a police force is much easier, while there are events with protesters that almost force you to use violence – with the bad press that we will win for it – And finally, we have seen some bug that made us repeat a completed mission, and not all the texts have been translated.

Music is not abundant, although when it does it is good. During the game, we mostly listen to the sound effects, and it is very well done staying true to the nature of a real RIOT. But there is not much more in the audiovisual aspects, and except for the peculiar pixelated aspect with a generous amount of characters on the screen, the whole game takes place in a series of very small screens. 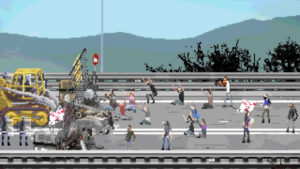 As a real-time strategy game Riot – Civil Unrest is quite modest, not very deep and somewhat repetitive. It is a pity that their defects tarnish a title that with an interesting, current and different approach to many other themes of fantasy war and science fiction, especially because it touches on some real events that are still current in Spain.

In short: RIOT is a curious title, especially if you have experienced the situations described, but somewhat short on ambition. Titles concept gave much more of itself, should delve into more strategic aspects and be more polished in the gameplay.

We have prepared this review on PS4 and Switch with a digital code provided by Terminals PR and Merge Games.