Sega's famous hedgehog brings back full of nostalgia that will delight fans of the series.

Many years ago, the jump from 2D to 3D practically forced the developers to transform their best-known series to move from 2D to 3D development. Some did well and others not so much. For Sonic, it took a long time to find the desired place in 3D, and even then, there are many fans, who couldn’t find the entertainment values of classic Sonic in Sonic 3D.


After testing different mergers, such as the Sonic Unleashed or Sonic Generations, even after returning to the side development with a Sonic the Hedgehog 4 that did not finish deserving the 4, now Sega will bet on two different games. One of them, in three dimensions and “modern,” Sonic Forces, and another classic to 100%, Sonic Mania.

Sonic Mania is a platform game in two dimensions, which follows the wake of the original titles of the series. This means that if you played on Mega Drive or Mega CD to any Sonic, you would find a sort of direct sequel. It is not only a sequel but could also be considered a tribute, with much content to get the smiley to the fans of the hedgehog.

We playfully have jumps, ramps, loopings, secrets, special phases and fights against bosses: everything that represents the saga. We have some new details, such as the appearance of a mid-boss in each world, or a new single movement for Sonic, called “drop dash”, which allows us to accelerate left or right when jumping, something quite simple But that when we get used to it we use to move us with more agility the scenarios.

With this, we want to make it clear that the essence of the series remains intact, and it is almost a journey in the past. We have three controllable characters (Sonic, Tails, and Knuckles) and 12 worlds, many recovered from Sonic 1, Sonic 2, Sonic 3, Sonic & Knuckles or Sonic CD, as well as completely new ones. The classics are not introduced as such, but are “remixed,” and in many cases, the only thing left of the originals is the aesthetic and some iconic stages. That is, we are not going to play through completely known levels, but we are going to revisit them. 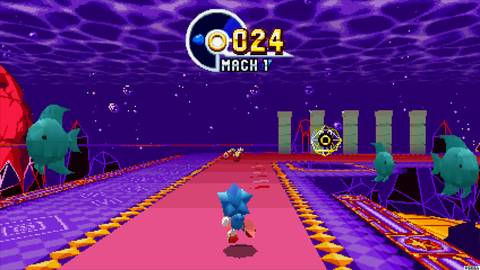 The new scenarios could be created perfectly by any of the original members of the series, both in the artistic and in the design. They are complicated and convoluted, but they always have that way of showing you the way to the end. Of course, the easiest way does not usually lead to monitors with lives or inputs to bonus levels, for example, so we always have to look for the less straightforward route.

This level design, as in the classics, encourages us to replay and explore to get all the emeralds or medals to unlock extras, plus there are some things that change depending on the character we use. The emeralds are achieved in the special phases to which we access when finding the secret rings. These are very similar (if not identical) to those of Sonic CD, and in them, we have to collect balls to increase our speed, rings to add time and to reach to the UFO that has stolen the emerald one before the end of the weather. 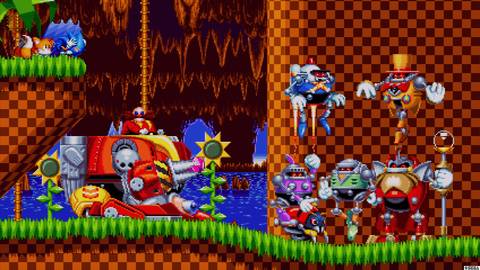 The medals for the extras are achieved by entering the portals that open the checkpoints if we cross them with more than 25 rings, and recreate the secret phases of Sonic 3 and Sonic 3 & Knuckles, and encourage us to get a series of blue balls And rings. If we get only the blue balls, they will give us a silver medal, and if we get the balls and the rings, they will give us one of gold. Speaking of extras, we can not forget the time trial mode and competitive mode, which without being revolutionaries, are always appreciated.

Point and separate for the final bosses and the heads of half of each world. Many of them are some of the most original and funny bosses of the series, although they are also terribly easy. That, extended to the adventure in general, is perhaps our biggest hit about it. We have passed the game without ever being without lives, something unthinkable for the first time that you play a classic Sonic. In battles with bosses, also, it is fairly easy to get at least the last ring if you get hit, which makes you almost invincible. We understand that we are in 2017 and the level of challenge is usually lower, but being able to save the game, we would have preferred something more difficult.

A wonderful trip to the past

Audiovisualally, Sonic Mania is a wonderful journey into the past. It is a game that we could have played on Sega Saturn, if not for that imperious need to make the jump to the 3D we mentioned before. Several stages take advantage of effects that would have been almost impossible in Mega Drive or Mega CD, including polygonal elements, more animation pictures, more detailed sprites or simply more resolution. 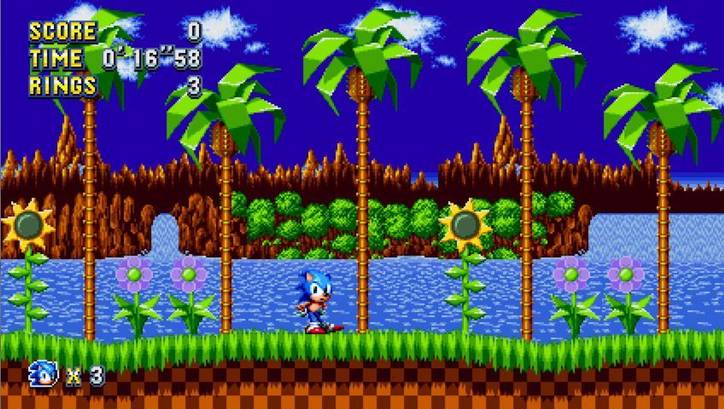 Everything is very careful to maintain authenticity, and there are also dozens of references to other games; Some more obvious, and some darker. From effects of sounds reused in different places to classic enemies, passing by cameos of characters not too popular. Sonic Mania not only knows how to recover the aesthetics of last year but above all it completes a lot of quality service.

On music, we can only say the same thing. It captures the sensations left by the melodies of the time, with some great compositions and all the repertoire of sound effects that we know of heart. From the jump of Sonic to the breath when catching air under water, everything transports us to those who, by far, are the best games of the hedgehog.

The Sonic that many expected

Sonic the Hedgehog and its immediate aftermath have defined a lot of players back in the 90’s. Many of them have been waiting since then for Sonic to return to his origins, and now he has done so by the big door. A game that transports you to another era, and that constantly pulls you a smile if you are a fan of the first adventures of the hedgehog. 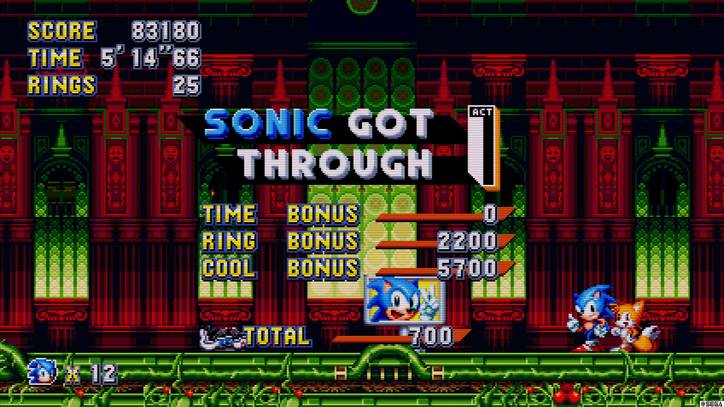 And is that, after all, Sonic Mania is, more than ever, a game made by fans for fans, where the passion for a series goes ahead of money. If you have never played Sonic, you will find a fun classic platform game, but if you remember them fondly, the experience is multiplied, extended with extras to extend its duration. For us, Sonic Mania is the perfect blend of gameplay, charm, fan service and, for what to deny, nostalgia.

First unboxing of the DualSense, the PS5 controller
October 23, 2020