Post Apocalyptic games are always been around and there seems to be a special resurgence in the past few years. Final Station is yet, another indie game set in the bleak future. Although this one has a premise Very Reminiscent of the movie Snowpiercer, a world devastated by the unknown and a train that has to keep moving. The final station has one of the more intriguing stories we’ve actually witnessed in an indie game, especially of the post-apocalyptic variety, which is a genre that we tend to feel is a bit overdone and predictable these days. the final station is the classic case of a zombie outbreak of not zombies. Which again is very predictable but we feel that this game really tells it very well.


The story follows an everyday train driver tasked with completing the mysterious governmental task of transporting precious cargo. This is during the time after what is called the first visitation, a catastrophe that decimated the world. Although it is never fully clear exactly what happened. You quickly become enlightened when during the transportation of your important package the second visitation commences and the population begin to be infected and transformed into shadowy zombie-like creatures. it’s then the conductor’s job to find survivors and transport vital items to fight for the cause, and ultimately save the world. The story tells a very tragic story and you really feel for the people involved. We especially found moments on the train to be the most telling as us and the other survivors witnessed things from afar show the dialogue presented here may not be all that but the sense of feeling you get from seeing things visually is very strong. Surprisingly how invested we became with the struggle against the second visitation. 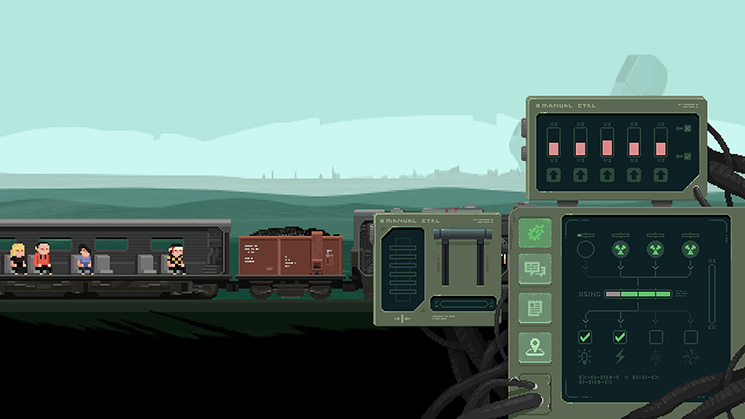 The audio is a bit of weak point, this is mainly because of the lack of music as you’re playing the game. There is almost no music in the final station, especially during the gameplay. We suppose this is a stylistic choice from the development team to make the world seem more desolate and empty, but nonetheless, we like music, there is a bit of music in the safe zones and is nice enough but wish there would be more of it. Maybe some creepy ambient music during the exploration sections. 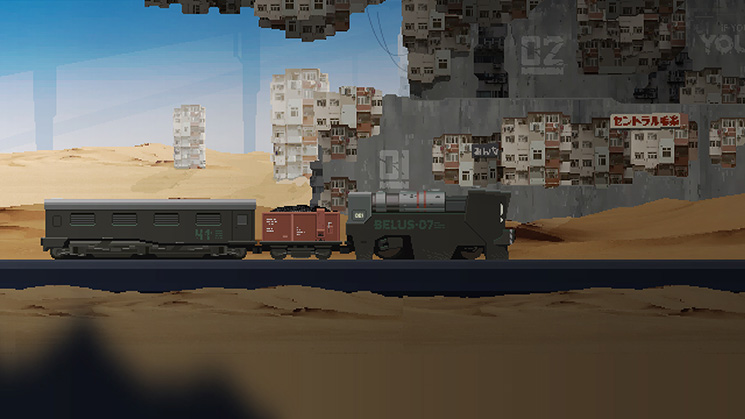 The visuals are decent and really good. The characters, environments and the environments are pretty good. You get some really interesting visual pieces on occasions, such as favourite visual parts are by far the backgrounds you pass by while travelling on the train, they are hugely varied and often quite spectacular looking. The pixelated art-style really fits the game, while the performance was fine for the most part. We experienced several stutters when you reach checkpoints in the game and is quite noticeable, but it didn’t really affect gameplay overall. 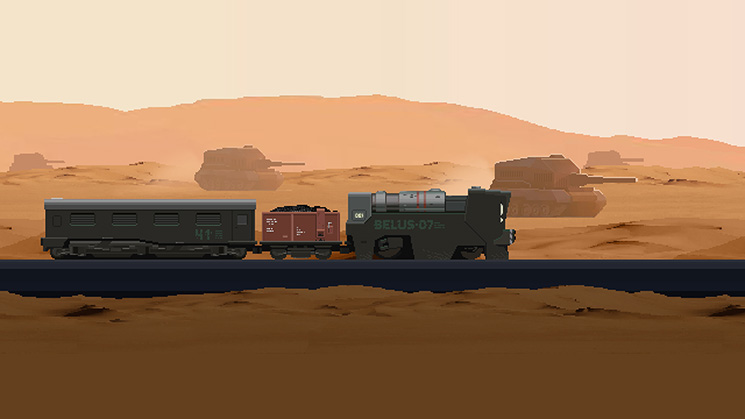 The gameplay is divided into two parts; the side-scrolling exploration adventure part and is the train riding part. These parts have a different pace but complement each other very well. Starting with the action sections, your train will arrive at one of the many stations in the world. Every time it arrives, it is automatically locked into place for security reasons with the code. While you exploring the environment, picking up supplies of food and med packs you may come across survivors who can be persuaded to go on your train. The main goal of these exploration parts is to find the code to release your train and these are strategically placed to be discovered right to the end of your wondering. In the meantime, you’ll be fighting off a small variety of enemies that want to kill you, there are enemies of differnt type, standard shufflers, the small, fast ones, and the ones that blow up after being shot and even some in armour that have to be dealt in different ways. Walking around with the left analog stick and you aim your gun with the right stick. You don’t get full 360 aiming coverage, but it’s pretty generous. Your fire with the ZR button and keep in mind that you really going to want to choose your shots carefully. Ammo can be very scarce in the final station so many times we found ourselves desperate for it. You can always craft more back on the train, but when you out in the wild. you need to wish you find some in the cupboards, boxes and containers in regards to ammo. Your best bet is to use the melee attack as much as possible, as well as going to headshots. We found this aspect made the final station a very tense game. 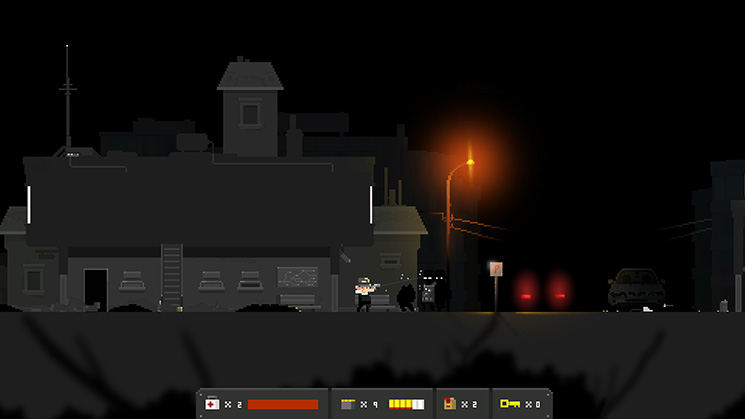 The Final Station is not particularly difficult. There are some awkward sections where you may perish at the hands of the monsters which outnumber you if you’re not prepared, but the game is generous enough with checkpoints so you never severely punished for dying and you can quickly retry from where you just died. Some people may find it too lenient, but we were happy and didn’t lose a lot of progress. You will find variety survivors that will hitch a ride on the train. It is your job to keep them alive. This is partly where the train management side of the game comes in while riding between stations you have to juggle between keeping your passengers healthy while also keeping the train running while performing maintenance in the form of pseudo-mini games. All passengers have 2 needs that you need to keep an eye on; the health and the hunger. If either of those reaches zero they die. You have to give them med-packs or food boxes, both of which are very scarce. One issue we had early on, is that the game isn’t very good at explaining things at the beginning. When we started the first time our assistant engineer died because he starved to death, and we had no idea that could happen. We didn’t know about managing the train systems, we did not know we have to provide food for the passengers. Supposedly this first death did make us learn very quickly though, him dying taught us a lesson. It still would’ve been nice if there was a brief explanation at the beginning. The survivors are a risk versus reward feature you want to pick them up because dropping them off safely as surviving refuges will give you cash on items, on the other hand, they can be a massive waste of resources, especially in the medkit department. Some survivors will be badly wounded and need treatment, fairly often, using medkits on them will leave you with less for yourself on your adventures. Our main gripe with the transaction is that this seems to be only one problem with the train at the time; either the ventilation is dodgy or the suspension of the precious cargo needs monitoring. It’s always one thing but not multiple things at a time, which we found a little on the boring side. It is also difficult to keep a track of the dialogue said by the passengers. We were really interested in what they have to say but when you’re busy making sure people aren’t dying and taking care of the train. It is impossible to follow their conversations. 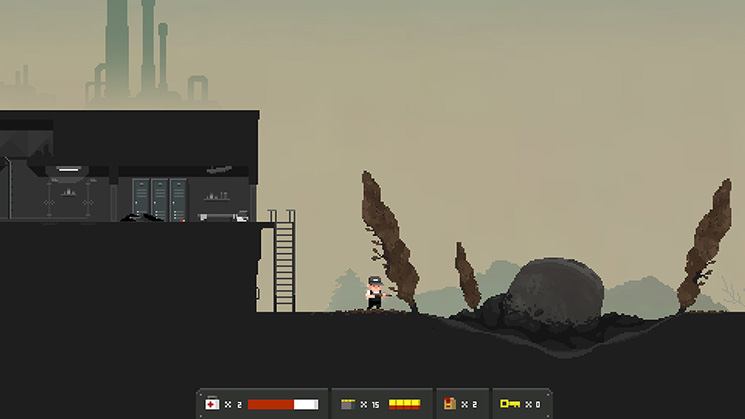 The two separate gameplay sections are actually fairly basic and taken out of the context of this game may be considered a little too simple for some. However, with the world building, the story and combining the two styles together makes The Final Station a unique experience. Some may not enjoy the linearity of it and the predictability of exploring and then train journey repetitive cycle, but we enjoyed it for $19.99 is a good deal for what you get. It’s a great little indie game that will probably last about five hours is not much room for replaying it to which you probably need to take into account. 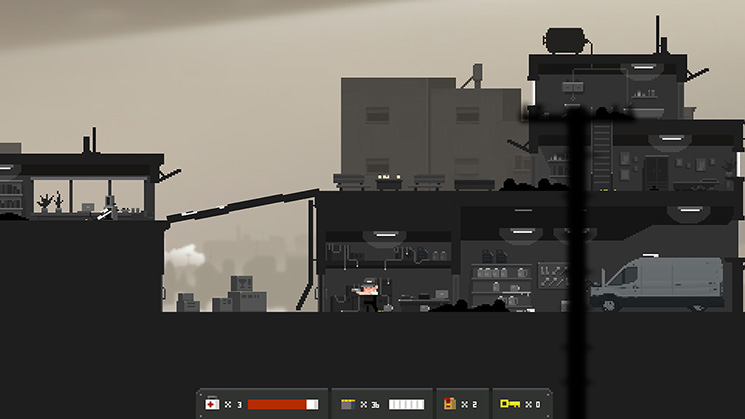 Overall we think the final station is an excellent game. As far as survival games go is one of the more playable in our opinion. It keeps its gameplay fairly simple, and the predictable gameplay loop really had us hooked; always switching between riding the train first, then going out exploring. The story and atmosphere provided really add a lot to it as well. It’s an interesting concept and hope to see more like this from the developers in the future.