Touring Karts has already been in Early Access for a season, finally brings its final version for PC VR front and PSVR. Although it does not end there, since this is the most ambitious title of  Ivanovich Games, they will eventually port it to mobile and Switch to create a crossplay environment for all to enjoy. Although this will come later, and we haven’t been given an exact date. We have reviewed the PS VR version on the Playstation 4 Pro. All versions are the same at the content level ( without forgetting the online crossplay), but obviously, there are differences when playing. For starters, you can play  Touring Karts in non-VR more and in VR, something that also supported on PC. When playing on the TV, we have to use the Dualshock to control the car, although unfortunately, there is no split-screen option to have some good old couch co-op a dearly missed opportunity.


We would recommend you to play it in Virtual Reality, and here we have several ways to play, as it happened in the PC version. The title already marks the two recommended options: play with the Dualshock, or the + Move steering wheel pack. We have the following ways to control  Touring Karts on PSVR. Dualshock with the possibility that the controller works at the same time as our right hand to use the objects (one of the recommended modes), Dualshock without using the remote control motion sensor, Steering wheel without any additional control, Steering wheel next to Move, to simulate the right hand (the other recommended way), Two Playstation Move but we do not recommend this mode at all especially if you’re new to VR you may get motion sickness, and lastly 3dRudder with a PS Move. Although we don’t have the 3dRudder so can’t comment on the experience.

Along with these options, there are a couple more, where you can activate the tunnel vision, in case we want, or make collisions less physical, and work almost like the teleportation movement of most VR games. In turn, we have three possible cameras to avoid dizziness as much as possible: one that is as if we were piloting a kart in an arcade machine (the one with the least tide), a third-person camera from within the game, and another in first-person, which is the most immersive and our favourite.

That said,  Touring Karts is a rather arcade karting game, where the use of skidding to get turbo around corners and defensive/offensive items are crucial to achieving victory. However, do not expect circuits as large or wide as those similar to Mario Kart, the developers created tracks similar to Formula 1, with circuits of small size and somewhat narrow, so that we have to take the corners well. , and the beginnings are somewhat bumpy. This is not a simulation, and it’s an arcade game, so zero worries about crashing since your car won’t get totalled from crashing, say even if you go off the track, you will respawn in a few moments.

We would prefer more crazy circuits full of shortcuts, but that’s not to say this title is bad, it’s a missed opportunity. On the bright side, there are more than 20 tracks available that are well done, and some have undergone a major overhaul (the opening circuit is now a mix of all the others and much more fun) since the launch in Early Access. Another positive point about the Touring Karts tracks is how dynamic they are. In all of them, there will be areas where the track can rise to cause unevenness (and add verticality, which never hurts), there will be obstacles of different kinds, or representative animals of the region in which the circuit is set (whether real or mythological ) to throw objects at us or make the ground shake, which will make us jump.

This, together with the various ramps along the road, makes the tracks, although mostly short, intense and fun. Not as much as, say, in  Crash Team Racing, but that would be a lot to ask for an independent study. Ok, the circuit design is still not revolutionary, but at least they work quite well, which is more than can be said for other karting games. Where the game does stand out the most is in the way of using the objects. As in most kart titles, they are random, but once we have an item, we can see the ones in the next batch of boxes. Why? Because we can combine the one we have with the next one we take. Almost all combinations are possible, increasing the power of the turn buff. For example, a bazooka or a block of ice is always useful, but if we combine them with the smoothie that makes us gigantic, we will make the projectiles also gigantic. 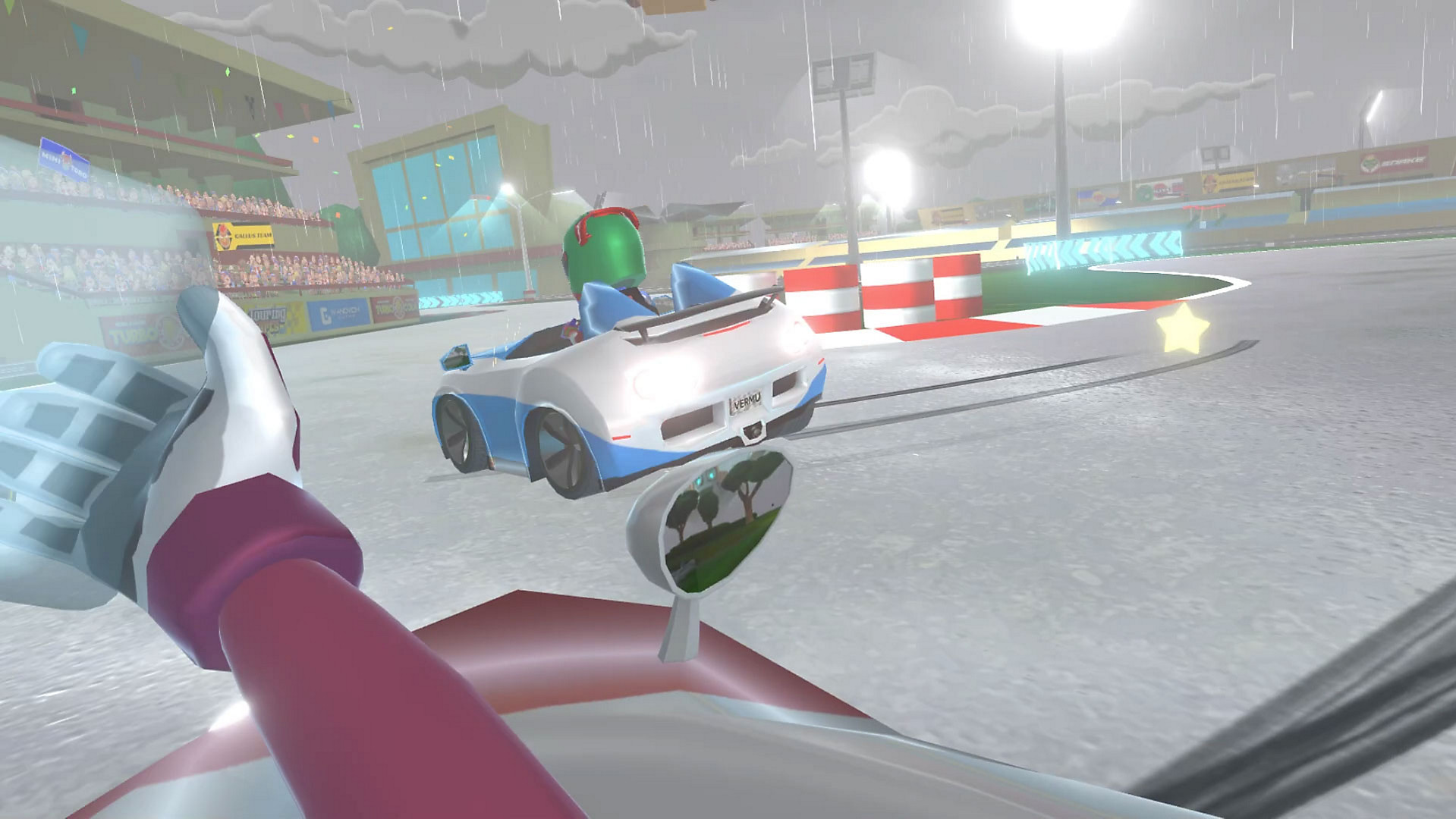 There are some very crazy combinations, like launching a giant hen that goes with a super turbo or invoking a UFO that will land all the rivals that are close to us for a short time. This madness makes it possible to shoot and be fired at almost any time, so that we win on the last straight, or they overtake us just two meters from the finish line. It is something typical of karting games, which can be frustrating or give enormous satisfaction, with which, in that sense,  Touring Karts works very well. If all this sounds very similar to what I said in the trailer, it is because the essence of the game has not changed in the least. Yes, now everything is more polished, but the strengths of the game are still at full capacity. We are happy to see that using the Dualshock 4 together with its motion sensor works quite well. As for the progression, there will be several levels. First, all tracks except the initial one will be locked. We will have to access them little by little, completing races from Easy to Hard in each of the circuits that we unlock. Depending on our position, we will earn experience points and money. 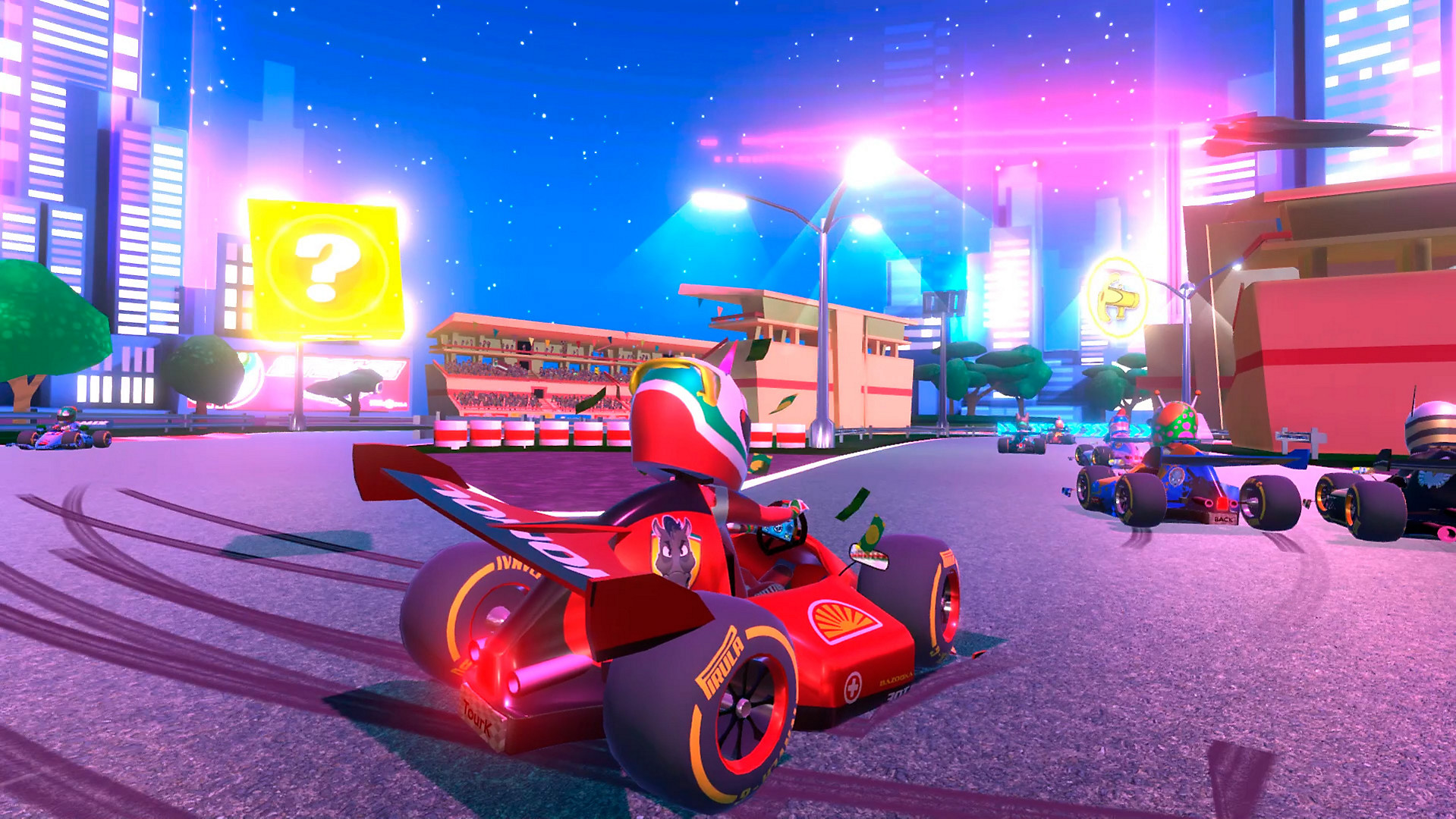 By reaching certain experience points, and completing one of the two objectives marked on the slot machine, we will be able to access one or two rewards, which will be new circuits, cars, customization accessories or more money. If we want to go directly to a track or buy a car, we can do it with the money, which is given to us at a very good pace so that we never feel that we are without white or we have to farm, something that is appreciated in these times. To compete, we can belong to different teams in  Touring Karts, each having a different visual style (clearly inspired by real Formula One teams) and three cars to choose from. Although there is no statistics screen as such, it can be easily noticed that one of the three vehicles is the fast but light one, another is the slowest but heavy, and the third is the balanced one. It is not that it affects excessively, but what we will notice is when we make mechanical improvements (up to 20) to each vehicle since we will significantly reduce our times if we test a circuit with the series car, and then with the same but at the same time. Maximum improvements.

Along with the individual mode (which has no more chic than gradually unlocking the circuits), we have the option of playing online against the users of the other platforms. The online is functional, with the possibility of participating in temporary challenges to increase the rewards obtained. Still, it is not that it is hugely populated at the moment, something normal when the game is in Early Access and without being offered for sale on consoles. At least, the races I’ve done worked quite well, without any lag or notable problems. Where there are problems is in the overall stability of this version. I have suffered several crashes while playing  Touring Karts at random times, such as after claiming the rewards, or just loading after celebrating a hard-fought victory, for example. I did not lose progress thanks to the automatic saving, but it is annoying, especially when the application does not close you, but the image stops you. It seems that you are in an infinite mirror, with the edges repeating to the beyond. It is something that can always be solved with patches, but annoying, especially when you are in Virtual Reality. 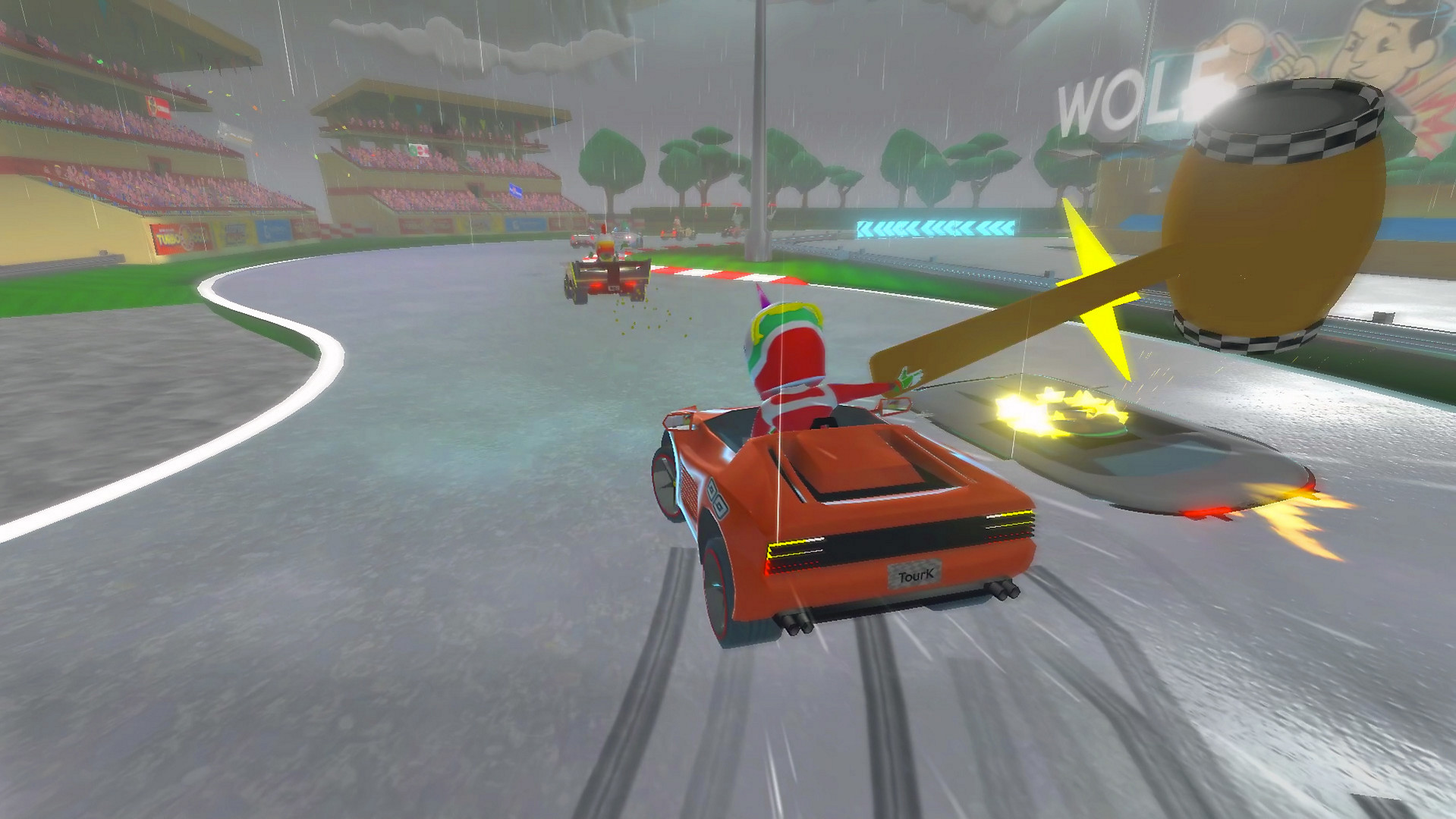 Moving on to the technical aspects, this version of PSVR gives us one of lime and another of sand. On the positive side, the game is really colourful, full of striking figures and effects, which help the dynamism of the tracks that I mentioned before so that they are easily differentiated from each other. However, there is one important catch: saw teeth. I do not know how cars are not punctured with all that there are since they are very noticeable. I don’t know if they haven’t implemented AA to keep the image sharp, but I think an intermediate point would have been fine since this problem is really obvious even on PS4 Pro. Also, the textures aren’t great things either, noting how they fade depending on where we look, which we will notice, especially in the start point. At least the loading times are very short, something that is always appreciated. 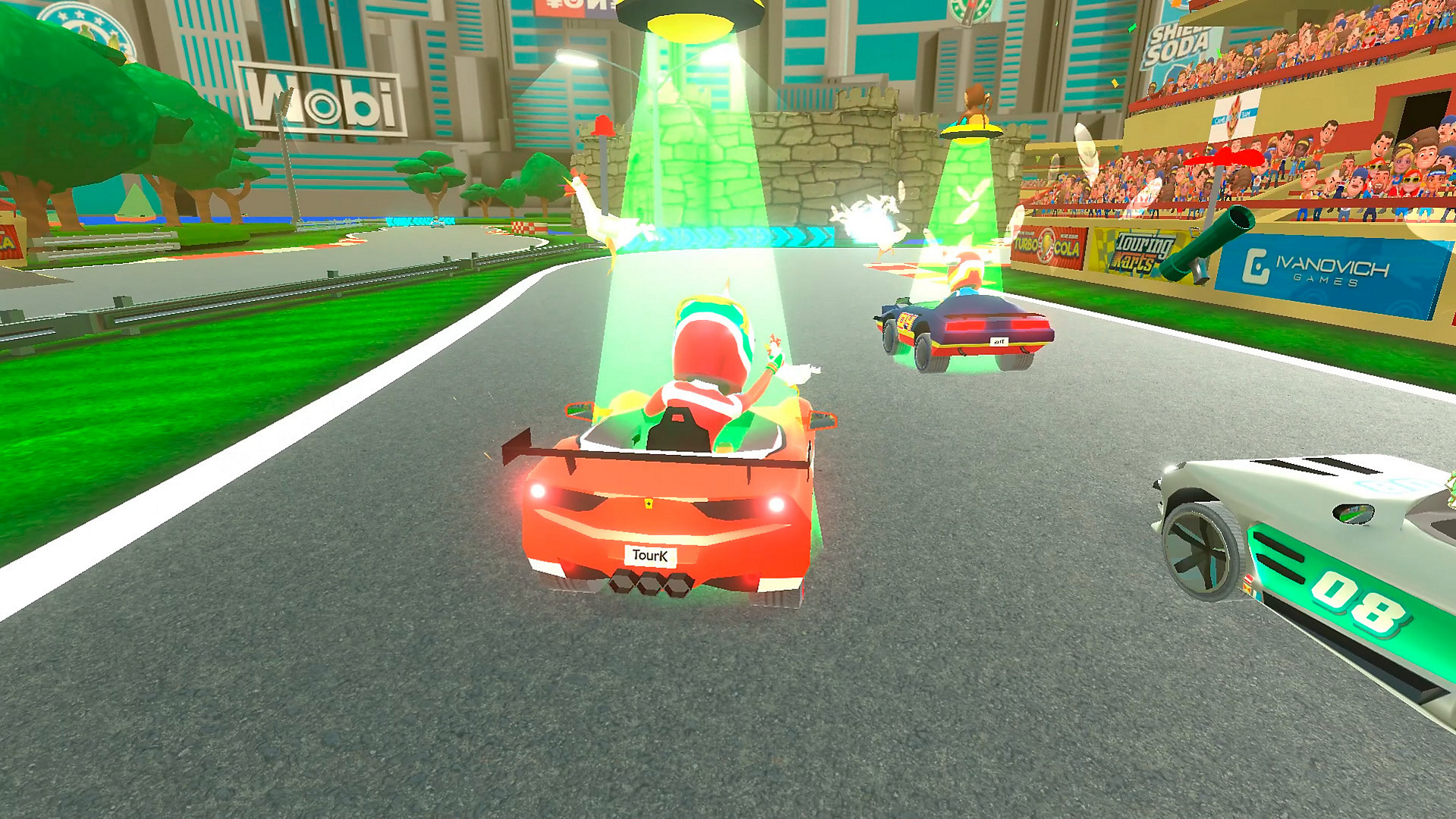 In the sound, tunes are fine but not very memorable. The themes do not seem very different from each other and end up being somewhat repetitive. At least, the sound effects are up to the task, working well so that we know what they are shooting at us if we have hit an opponent, and ultimately, let us know what is happening around us. 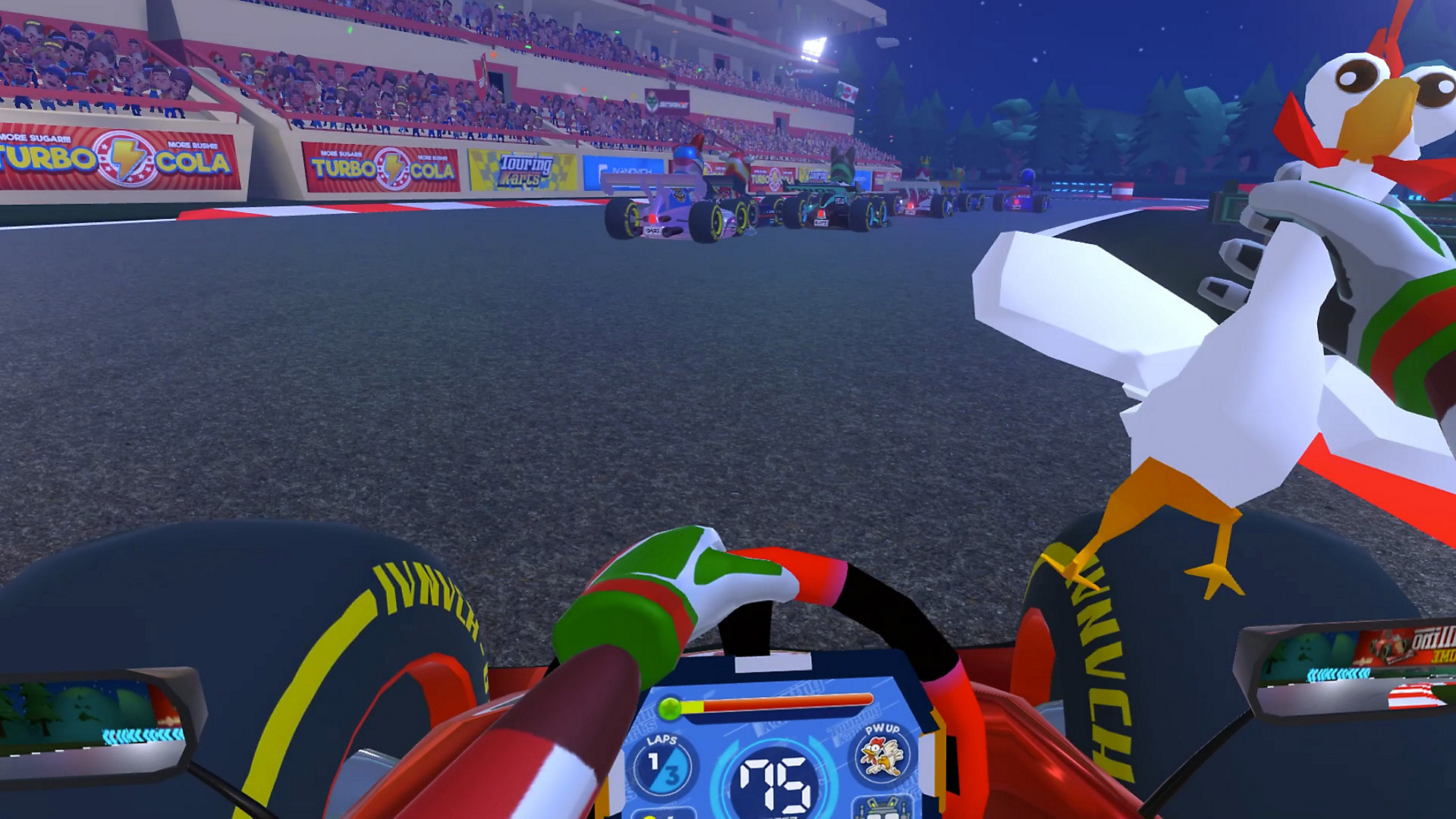 Ivanovich Games bring us the best kart game in Virtual Reality. It is not offering much given the “competition”, but that does not detract Touring Karts from being simply fun, accessible and addictive. It has its problems, such as a control that does not work very well or some other bug to crush with the wheels, but we had a great time aking down our rivals with fun weapons.

It is not the craziest karting on the market, and in fact, all the good that can be attributed to it, comes from the VR side, since despite the possibility of playing flat, there are infinitely better options on the market, and it is where I have a hard time recommending the game. Now, if you have VR and want a frenetic karting experience, with its moments of madness to enjoy alone or with friends, and with plenty of content, then Touring Karts will keep you entertained although for how long it remains to be seen since the competition that is coming is fierce, that is still great news so that, finally, arcade-style karting takes off in Virtual Reality.