The spiritual successor of Theme Hospital comes to consoles with a remarkable adaptation, very entertaining and many hours of health care management.

The ’90s brought us very different genres and video games, some unforgettable classics. Who would have told us that a simulator, as particular as Theme Hospital, was going to entertain us gamers in such a profound way? Bullfrog’s hospital management title enjoyed and remembered decades after its launch, had no sequel or successor to match. Until now. In 2018, Two Point Studios, a studio formed by seasoned veterans both Bullfrog and Lionhead Studios-two of the key teams in the rise of this genre,  so they decided to try to adapt that magic, with a certain nostalgic feeling, to  Two Point Hospital. And it’s a success!

Thus Two Point Hospital was born, a title that collected the most notable characteristics of Theme Hospital, adapting all the goods to this new title and adding certain elements to make it more attractive, profound and fun. After passing through PC, and with some delay to improve its quality, Two Point Hospital now comes to consoles such as Xbox One, PS4 and Nintendo Switch, being more than just a simple remake.

Taking charge of a hospital

We will begin our coverage with the basics: Two Point Hospital is a hospital management and construction video game. So far, little doubt. The title is gradually showing us, perhaps with an excessively low difficulty at the beginning, inviting us to understand the mechanics of building, contracting and expanding the health center, always seeking to give us confidence in the direction we decide to take. During its first hours performs the functions of an extended tutorial, yes, but without being annoying or boring. We will soon understand how to create a solid structure of rooms and services in the hospital, intelligently locate each unit, train the professionals we need or even prioritize according to what treatments and diagnoses in order to avoid long lines of patients in the triage. 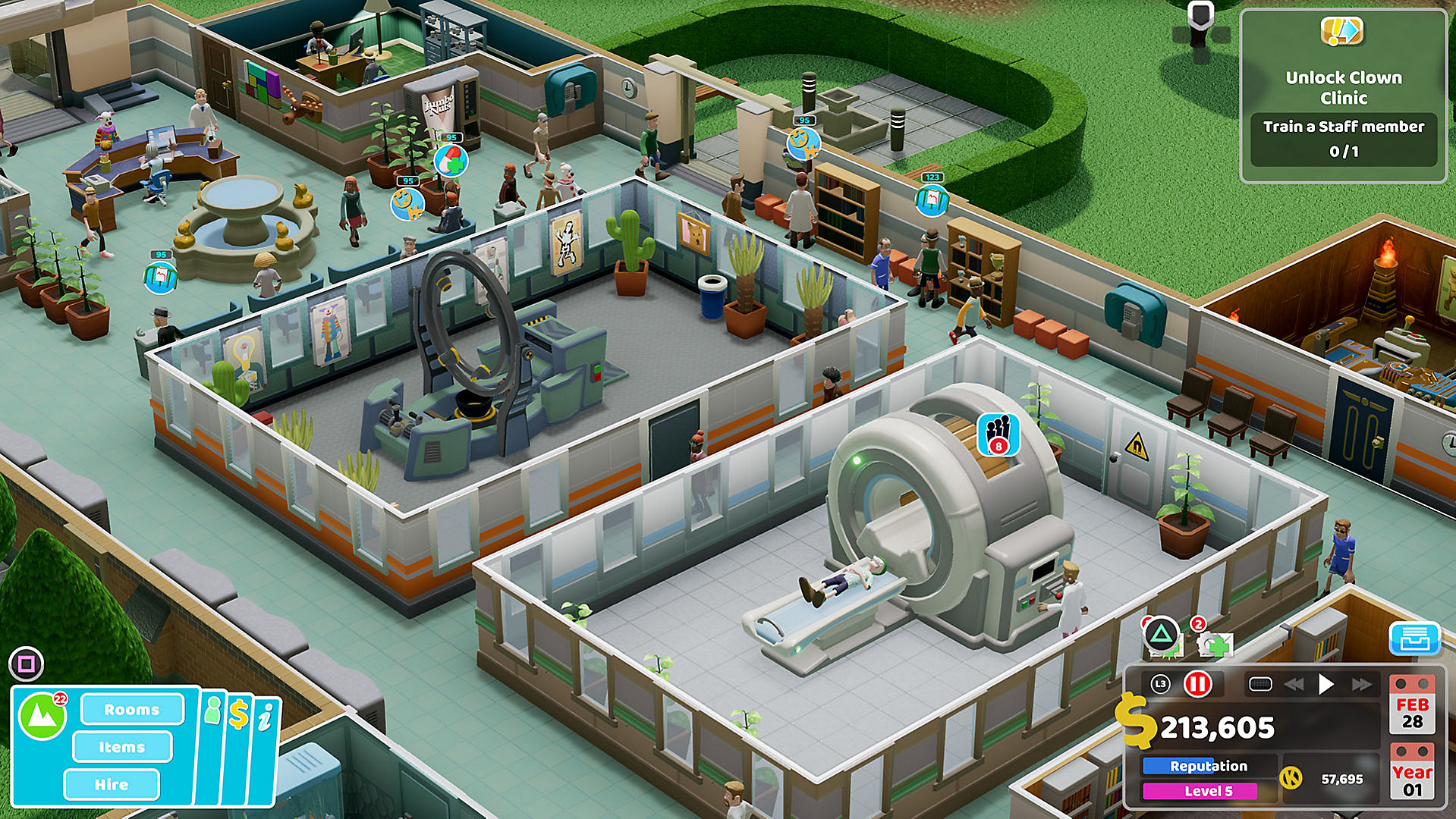 One of the fears that all the most novice or neophyte players in this type of video game is related to the difficulty curve. Two Point Hospital is leading us by the hand, very little by little, at least during its first six or seven hours. Once we unlock other hospitals, and begin to glimpse the truth behind this management game, we will face the real challenge. The title edited by SEGA hides a challenging complexity, sometimes somewhat artificial, that will lead us to fight against the greater forces of nature, viral crises and even strange diseases capable of collapsing our primary care service at the first change. In short, it keeps us alert, tests us and helps us to use those tricks, shortcuts and assimilated knowledge during the early stages of our journey.

So it should be noted that whatever strategy we decide to follow, we will have fun. Everything is well designed, calibrated and adjusted in the video game because picking up the baton from the original Theme Hospital. Whenever we start a game, we will have the feeling that everything, or almost everything, maybe under our control. Each decision, act or element in which we decide to intervene, will have a direct or indirect impact on future events. Everything is well explained and hierarchical, and almost anything we see or have at our fingertips in the game menus has its meaning in the big picture of the video game. Trust us when we tell you that, if you are looking for an experience similar to that of the classic Bullfrog, you will find it.

A complete game and full of ironic humour with a moral

However, Two Point Hospital is something else. The title invites us to advance and follow a series of objectives, which are based, in most cases, on the success we obtain in the tests and treatments we offer to our patients, and of which, following the example of American healthcare, we will get money. Do not worry, nor do you think that the game is frivolous with the situation, on the contrary, Two Point Studios has a certain ironic point in its health approaches, as well as in the illnesses of the patients we must treat – crazy, mostly fun-, giving us a lesson on a silver platter that is not intended to be moralizing or proselytizing in the narrative discourse of the game and that it will be the user himself who must distill it over the hours. 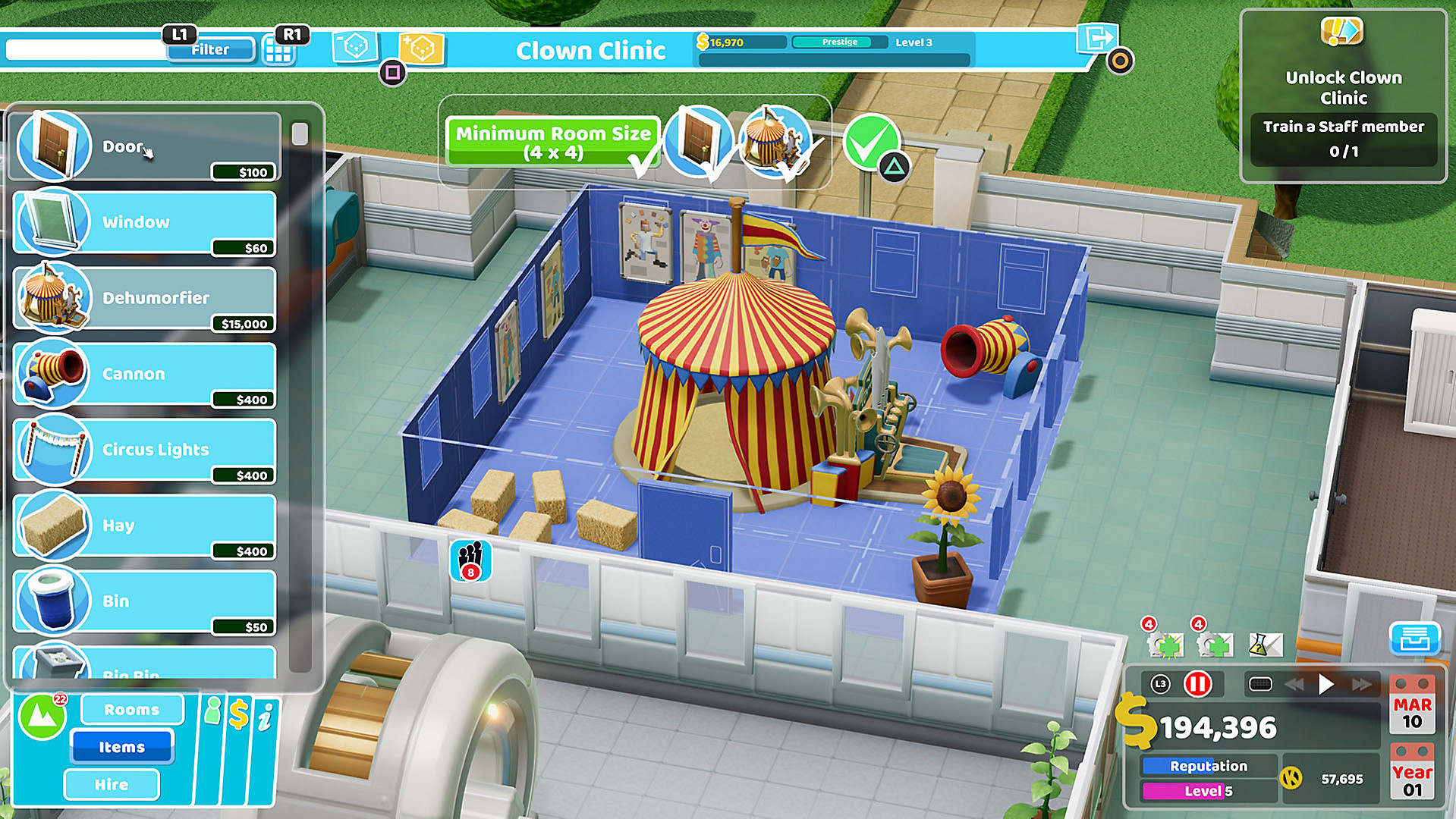 What type of manager do you want to be? Are we looking for worthy and expensive professionals, or do we hire and settle for the cheapest? Do we prefer to get fast and easy money or offer quality healthcare to patients? It is true that, even though we want to give you a more in-depth analysis, Two Point Hospital is a video game, and as such, we have objectives to solve, and predefined scenarios to solve with the pre-determined tools. Each hospital has its own challenges, with specific and unique conditions that will offer us various peculiarities in the games. Those located in ski areas will have a more significant influx of fractures and require heating. At the same time, those who receive people with psychological problems -there is a pathology that makes everyone go like Freddie Mercury through the waiting rooms-, will need couches and consultations from mental treatment. Mainly we talk about money and other monetary objectives. Still, the game will try that, beyond being successful in health inspections, we can raise the quality or the stars of our hospital center, an aspect that also enters the kudos, some special points with which we can unlock decorative objects or improvements to facilities.

This additional sublayer is very interesting, as it leads us to tastefully decorate and personalize our hospital, adding from soda machines to plants, drawings, gift shops and the like, which will give more wealth to the services provided and help the patients of the center to have a more pleasant stay. It is fun and special, as it will directly remind us of Theme Hospital, with hundreds of small elements that will give our hospital a special and unique look. During our review, we became especially obsessed with this aspect, looking for our facilities to be well presented, with pictures, drawings of young children, bookstores, quality vending machines, souvenir shops, magazines and countless others. Belongings that offered patients more welcoming places. What prize do you have? Reputation. It’s all a matter of reputation, essential resource management, and speed of response. 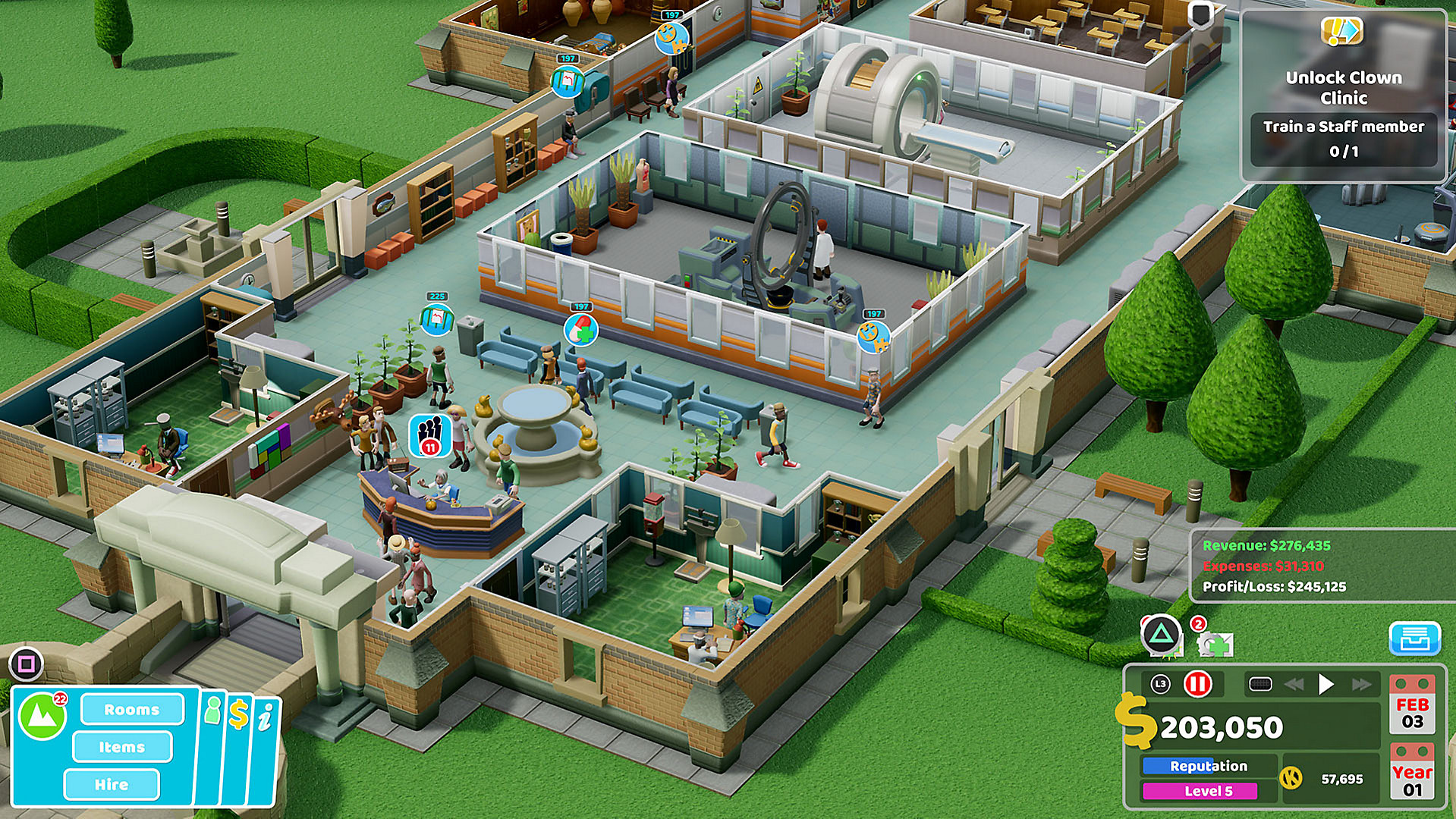 Two Point Hospital, therefore, being somewhat simplistic, we could say that it all comes down to the quality of service and global appearances. We must build many rooms, as many as we are able, depending on the scenario, paying special attention to queues, patient satisfaction and diagnoses. Once we have them, and the infrastructure is correct, we must move on to improvements. X-ray rooms, cardiology rooms or even general diagnostic rooms are always the most used so that after prior consultation, it is ideal to have them well equipped and attended. And of course, for that we need personnel. Here we already enter the preferences of each one – we can choose a lot and of low quality or little and with a perfect resume – and in the situation that touches us, because as we mentioned, in emergencies sometimes everything can go wrong. In any case, we reiterate Two Point Hospital each action and way of attending will vary greatly from the perception of the player and how you decide to face emergencies and routine care.

An excellent management game that is loaded with content

Everything said to date could be a trivial matter if we were talking about a bad port or an inadvisable conversion of the PC game to consoles: this is not the case. The video game is very well adapted to each of the systems, with special attention to the Nintendo Switch, a version that we also have reviewed. The menus are almost a carbon copy of those seen on PC but taken to navigation with a pad or controls and controls. Nintendo console, it is easy to jump from one menu to another by pressing just one button, something that is much appreciated and prevents us from hanging around when the situation is a priority. Two Point Hospital is a game in which the reaction is essential, both to build and manage and thanks to the distribution of the menu, and we believe that experience similar to that of PC is achieved. We also liked the font, both in portable mode and on the big screen through the dock. 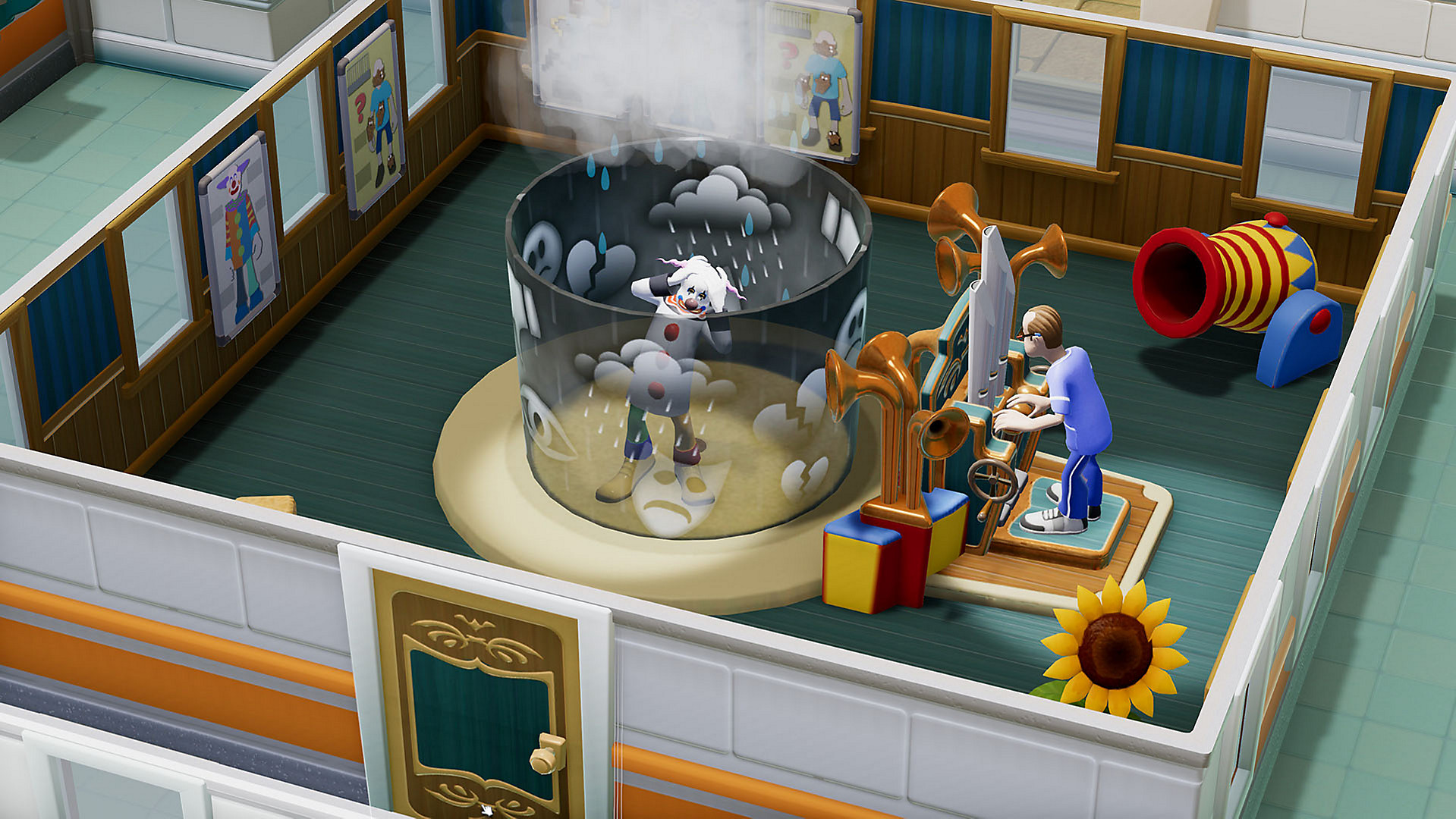 Plagued with humour, and more than that eschatological and led to the absolute outbreak, we must highlight how well it is at a graphic and technical level, with a port that respects the particular artistic section seen a few years ago on PC -entirely in 3D, with a camera that can zoom in or out-, and which also gives the stage an unusual solidity in this type of games and genres. In its jump to consoles, Two Point Studios has added a new global camera that offers us a simple aerial perspective, ideal for locating a bird’s eye view of those facilities that we are looking for without too many problems. Two Point Hospital It also achieves this based on an excellent soundtrack, a great sound design at the level of effects and some dialogues in the form of radio locution that, incidentally, are cutting.

We have to throw, despite everything, two hits. One of them is the loading times, sometimes a bit uncomfortable on the Nintendo Switch, and the other, the performance in the portable mode, which suffers when we put the system to sleep and return to the game. They are not irreversible failures, many of them have confirmed by the studio that will be solved with a patch on day one.

In any case, Two Point Hospital comes to consoles with hundreds of hours of fun, 119 different diseases and a troubled county, Two Point, full of health problems. It should be noted that, on the day of the launch of the console version, the video game arrives with its first two expansions Bigfoot and Pebberley Island, offering the user a total of 21 different regions to explore. Finally, we remind you that the Superbug Initiative expansion and the Sandbox Mode relief will be added for free at the end of March 2020 on all platforms. 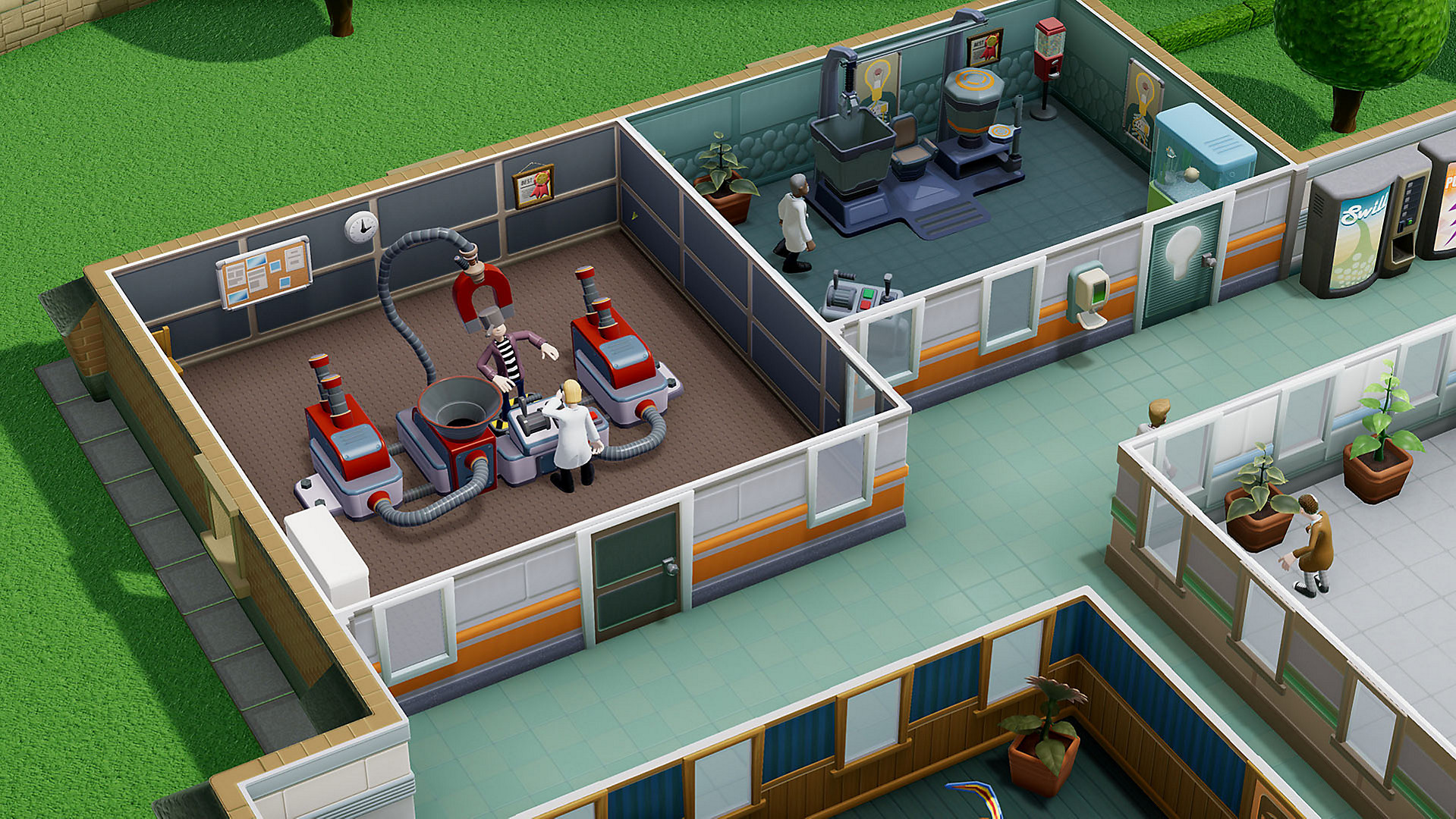 Two Point Hospital is a great video game on consoles, as was its version for PC. The delay has suited well, as the studio has been able to wisely adapt the title to the different platforms, customizing each of their menus and interfaces and maintaining the identity of the original product without obvious cuts of any kind. We are talking about an absorbing game that inherits all the right things from the legendary Theme Hospital, with classic and new mechanics, elements that suit the proposal. Emphasizing humour, and makes it very fun. Rewarding and solid, it is a unique video game, which reflects a way of conceiving entertainment in the past, and which now, over the years, returns to us. A must-buy if you love the genre.

We have reviewed Two Point Hospital on PS4 Pro and Nintendo  Switch with digital review codes provided by SEGA.