Unrailed! is a chaotic multiplayer game with one objective in mind: to create train tracks so that the train does not derail!

Lately, co-op games and casual competitive titles are getting revitalize. Titles such as Among Us, which is basically a board game translated into a spaceship, and with Fall Guys: Ultimate Knockout, a friendly battle royale in which the fun is not limited to victory, but to the clumsiness of the little characters.


And now we get Unrailed! , a video game developed by Indoor Astronaut and published by Daedalic Entertainment. It has appeared out of nowhere, actually, since it began its journey in the early access of Steam back in September 2019. A little more than a year later its version 1.0 has been released on PS4, PC, Xbox One and Switch, and became one of the most popular games among streamers.

The premise of Unrailed! It is truly eye-catching: players have to build a train track so that the locomotive can get to the next station, and they will have to do it while the train is moving slowly but unstoppably. We have a couple of tools, to begin with, mainly a pick and an axe, with which we will be able to collect the necessary resources to build roads that will later have to be placed on the stage. It will not be easy, because each level will be plagued with dangers that will hinder the construction of the railway. 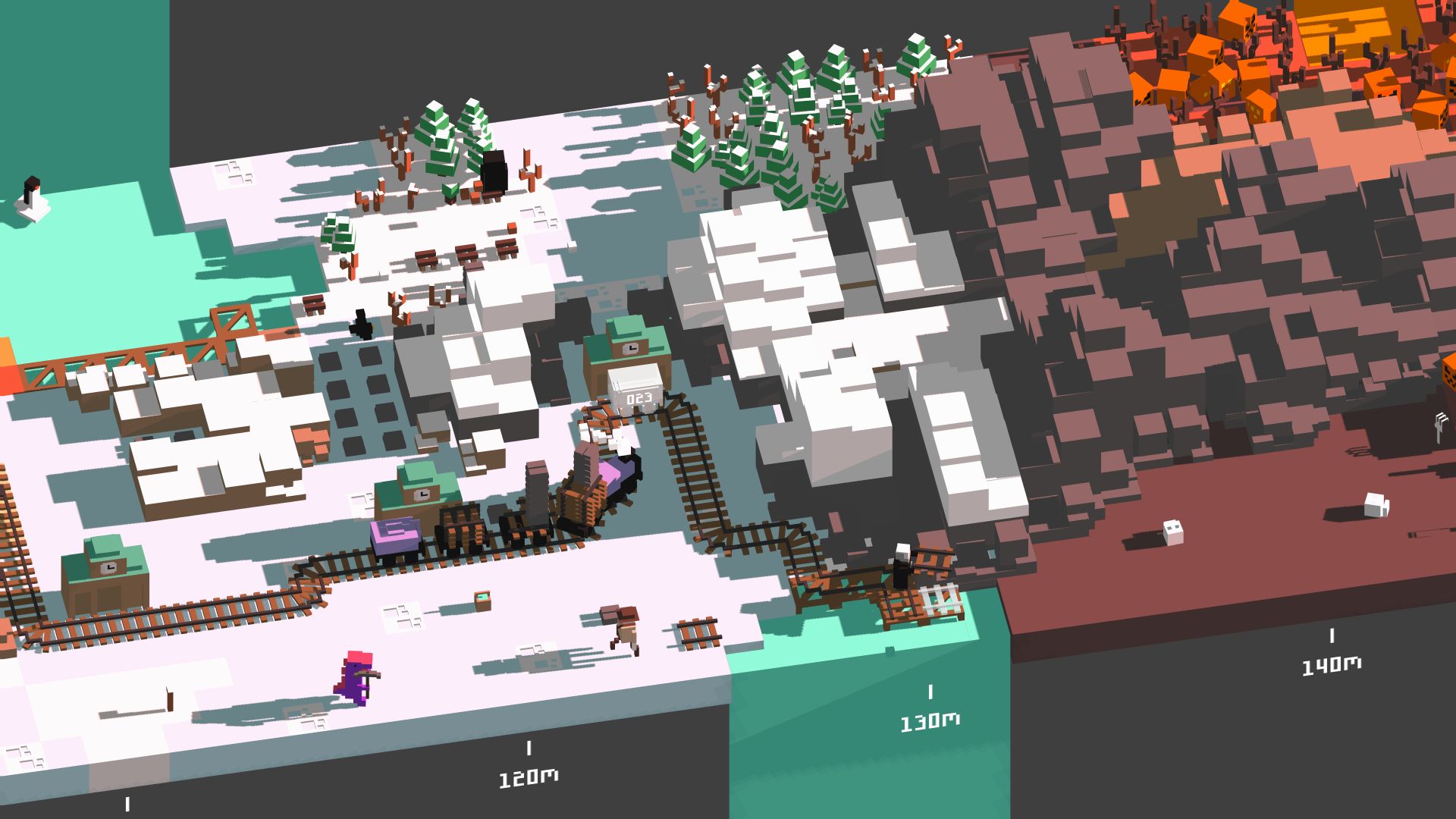 Unrailed! is part of that particular genre established by Overcooked!, one that poses chaotic multiplayer games based on collaboration between team members to overcome the accidents that are happening; same as in Overcooked! Not only do we have to be aware of preparing the dishes that they ask of us, here we cannot focus only on building the track: from time to time the train will catch fire, thieves will appear who will take away the materials or it will simply be night.

All these setbacks add to the already tense task of building the road. There is a simple control system that allows us to cut trees, break stones and place these materials on the train itself, in a special wagon that combines them to produce tracks. We have to play fast so that the train does not reach the end of the road before we can place another piece; otherwise, it will break and we will lose the game.

Variety of game modes and settings

Although there are several game modes (versus, free, fast and unlimited) the most common, unlimited, which works as standard, allows us to progress infinitely through different types of scenarios (more than five different biomes), always represented in dioramas with a voxel art not too original that reminds of certain clone mobile games. 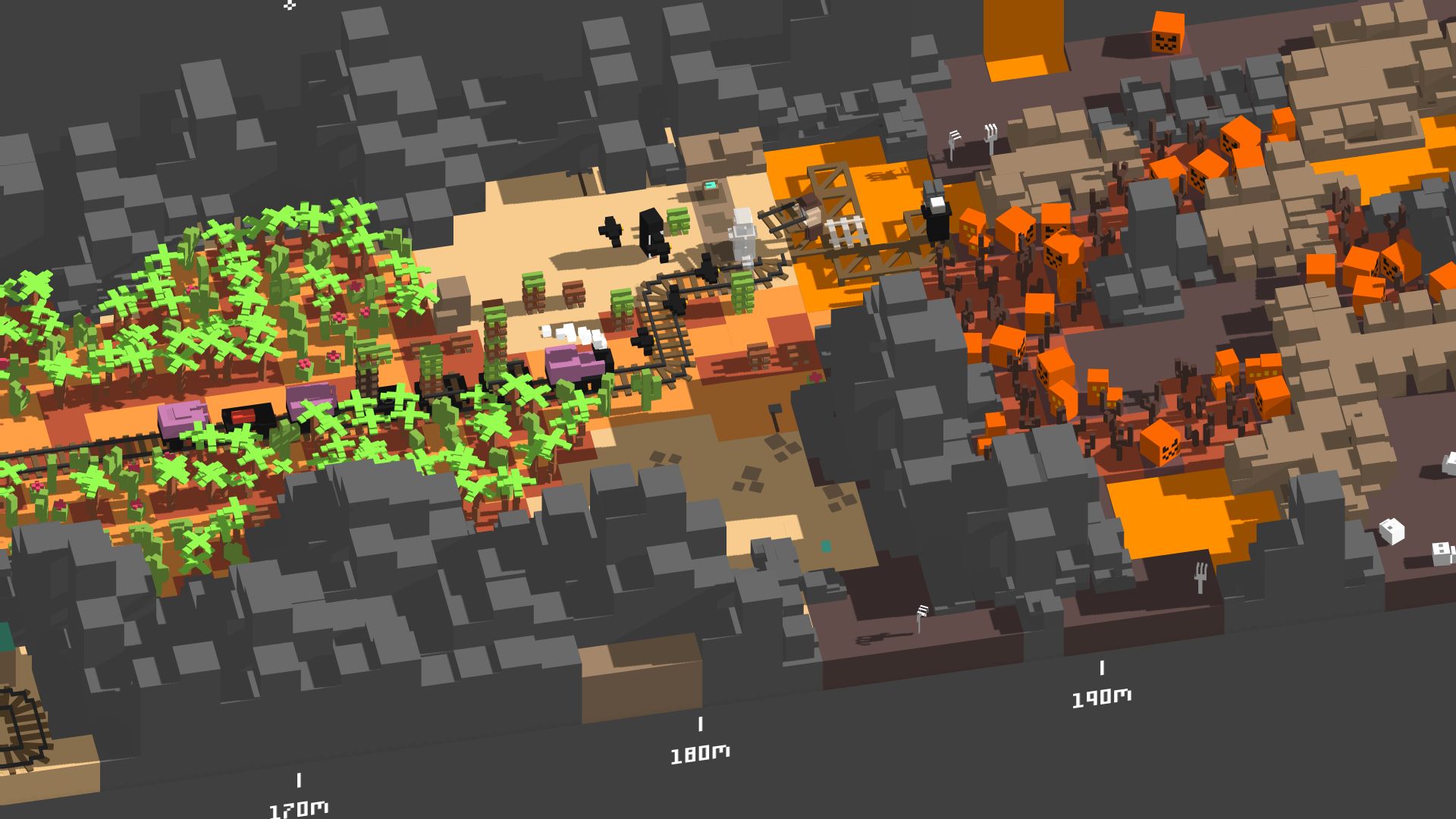 Each level has its peculiarities and the grace is to advance as far as possible in a single game. As we reach stations, we will be able to improve our train with more wagons (more than 10 types) and new improvements, such as greater load capacity or faster creation speed, in addition to unblocking new character models. 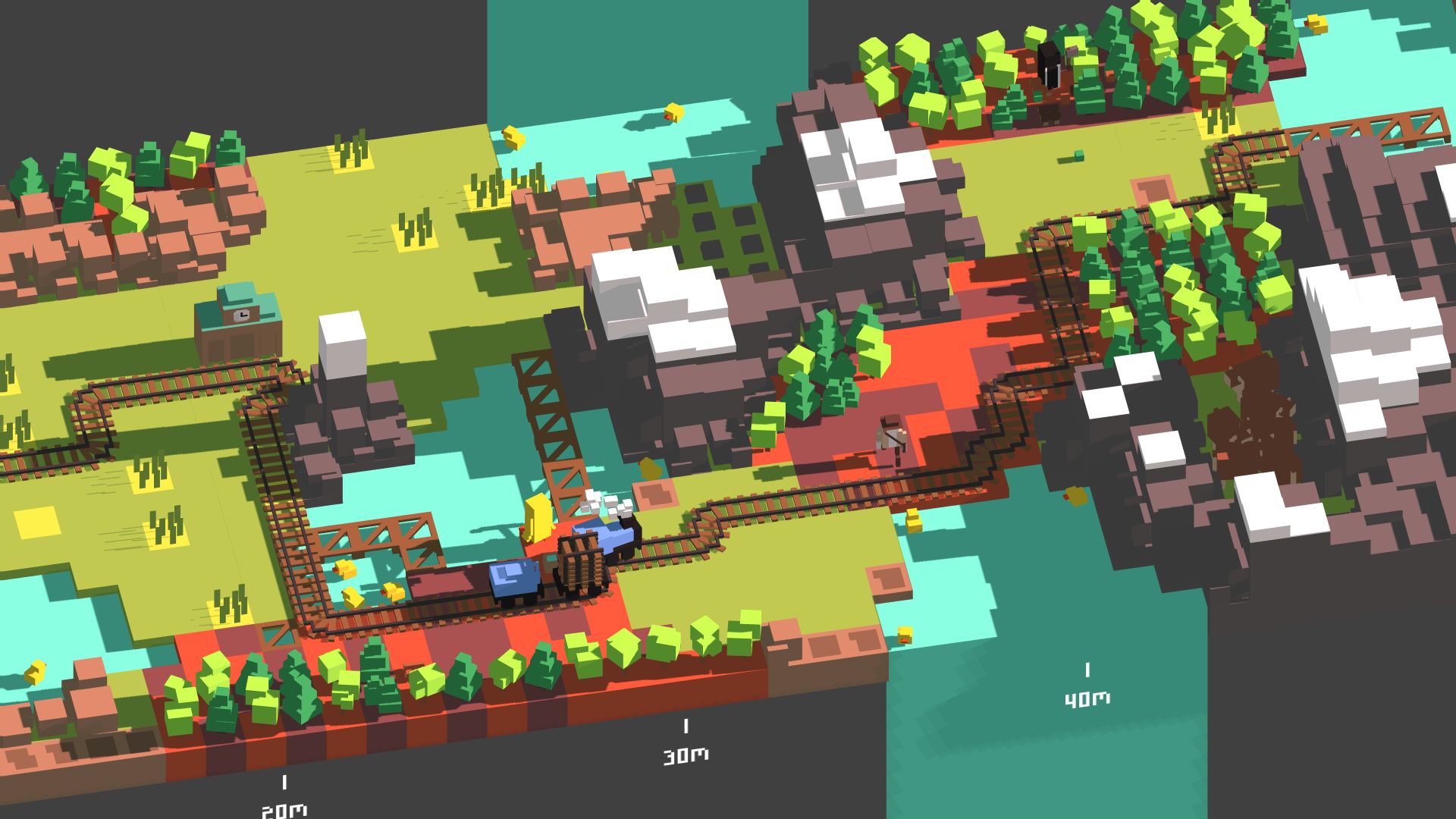 In fast mode, we are faced with a temporary challenge, to get to the station in the shortest time possible, and in versus, a competition is established between two or four players, each with their own scenario and with the possibility of further hindering the game. path of the opponent. Finally, as its name suggests, free mode leaves us free to build the train the way we want and put it to the test in more magnanimous scenarios.

All these game modes can be experienced in various ways: in both local and online multiplayer, this latest version with friends (in private rooms) or with randoms, and also single, with a bot that will act as a partner and whom we can give orders based on what we need at any given time. Our progress in any of the modes will be recorded in a large score table displaying the world rankings full of incredible records of players who have undoubtedly spent many hours to achieve. 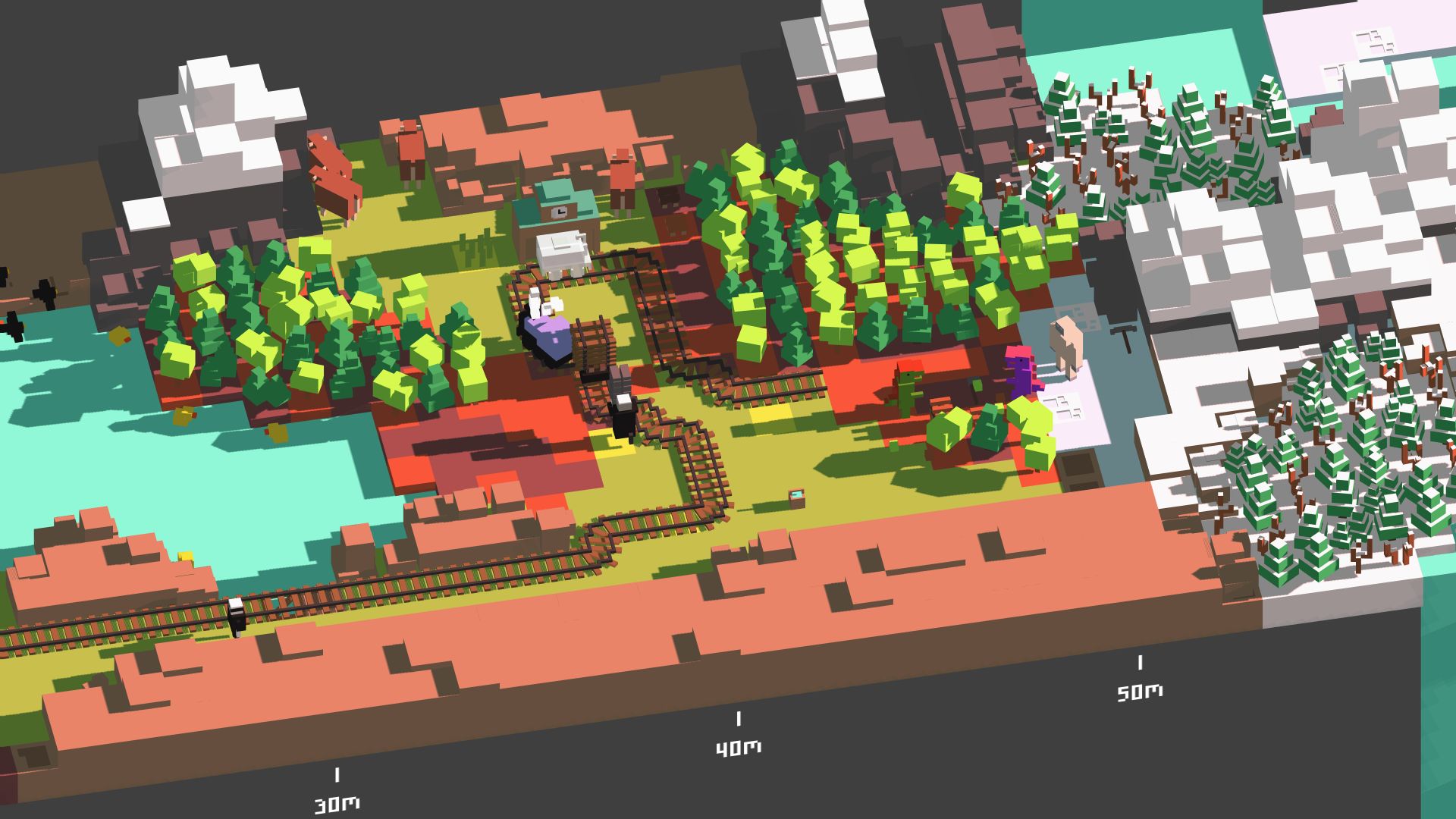 The truth is that the best way to experience Unrailed! It is cooperative, whether local or online because it is the collaboration between players where the main attraction of the game arises. Does this mean that the playable premise of Unrailed! It is insufficient? To a certain extent, yes: as soon as you play a couple of times alone and control the three or four dynamics it has, the game ends up becoming a bit boring and soon requires the incentive of cooperation with real people to gain extra fun. 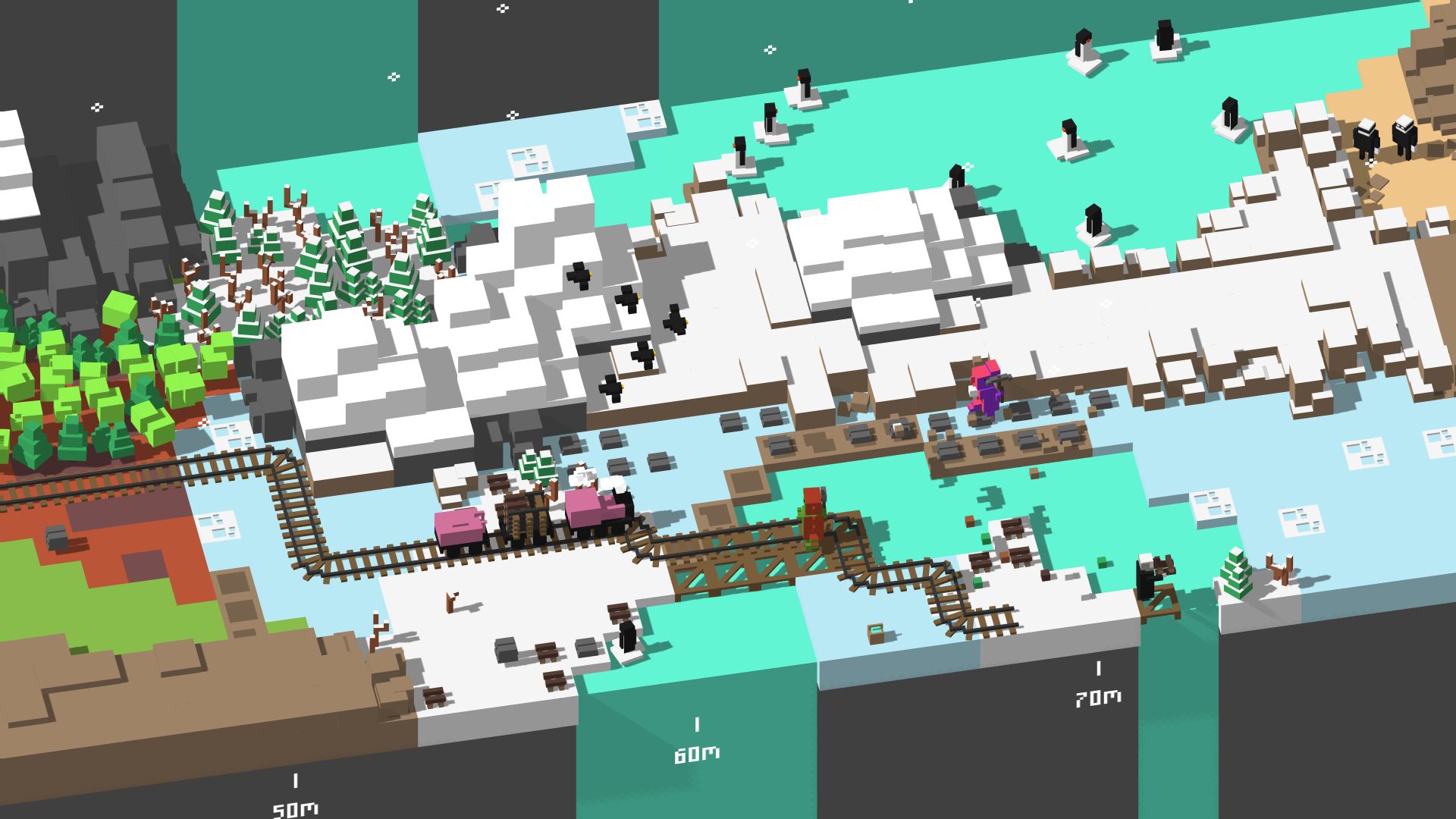 In fact, it also loses steam the more games you play in collaboration with someone. The procedural generation card works against it because its levels are not configured as pre-designed puzzles to beat, but as simple scenarios through which to advance. The fun fades even if the players themselves try to make the journey more difficult by going for the additional objectives whose reward, more coins to upgrade the train, does not make much difference compared to not taking them. 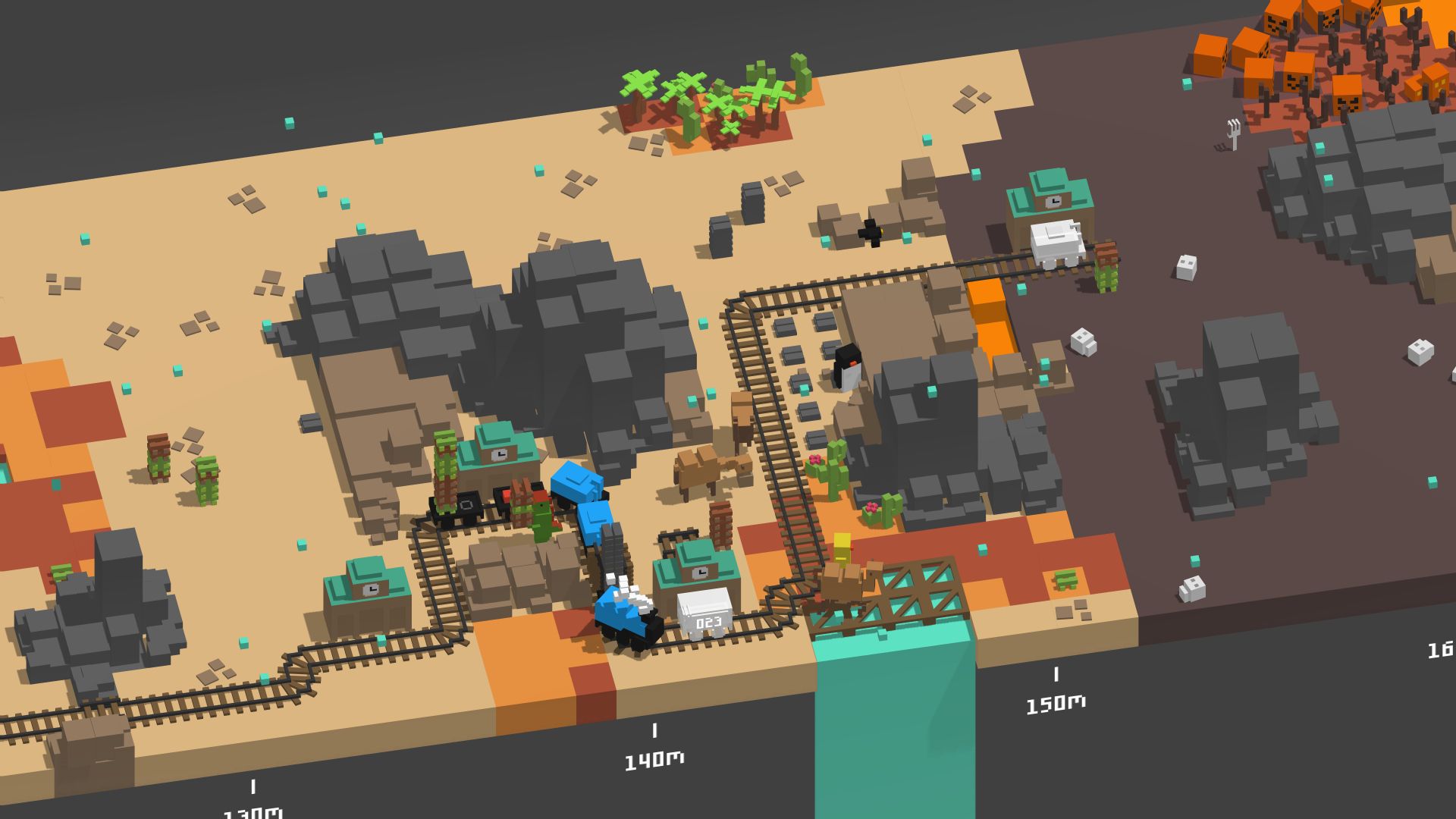 That Unrailed! Relying heavily on the social connection between players is not bad per se, although it is true that their cooperative fun is short-lived than perhaps one might expect. It is possible that its procedural nature works against it, as the challenge is repeated over and over again with the only increasing difficulty of a faster-moving train or certain random obstacles that do not hinder the gameplay too much. The experience is not so chaotic as to be extremely fun, but at the same time, it offers a good few hours of cooperative fun before exhausting all your resources. It’s a good idea that could even continue to evolve if the developers keep adding new content constantly, as they have done so far in early access.