Alekhine's Gun takes us to Cold War era with a good spy story, but there are issues such as; poor control and executing actions.

Alekhine’s Gun presenting us a superb atmosphere but offering a very poorly executed game, along with dozens of other problems that completely messes the end result. The beginning of Alekhine’s Gun is promising, with an enigmatic sequence that takes us the day after the assassination of President Kennedy in November 1963, all revolving around the starting point of a mysterious suicide. In a climate of political instability, a double agent, Semyon, who began his career as a KGB hero and ended up saturating in the ranks of the CIA, narrating milestones through flashbacks, even he infiltrates a Nazi castle in World War II.

Unfortunately, pretext and history are the only positive points of the game, when you complete mission there are sequences of static images that are very misunderstood by the respective voice actors, who seems to read and interpret their lines without any drama. All voice actors and actresses seem that they have no belief in what they are doing.

Alekhine’s Gun seems dated, among the titles of stealth and spies, with the advancement of 3d gaming and advances in artificial intelligence, lately games granted some freedom and power to the player. In this way, we were able to decide our options and infiltration routes, tricking  various targets coming out to meet us or discovering hidden secrets scenarios.

Today, these playable and technical tricks seem a little short of absurd, and empty, especially taking into account the progress we have seen in the 90’s to nowadays. What once surprised us, is become a norm at the moment and with the rise of increasingly complex gameplay mechanics and interactive worlds, it causes us a strange feeling of artificiality. 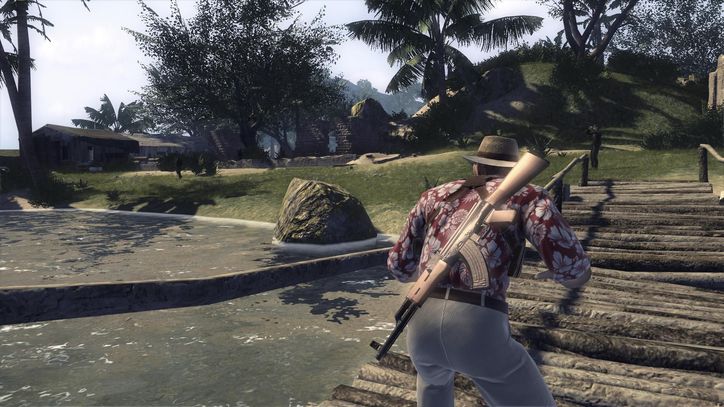 Alekhine’s Gun is precisely an artificial game, it’s poorly executed, awkward and very unpolished. It is as if a title as the first Hitman: Codename 47 trying to pass as a cool game and updated graphics. It presents a mechanical and robotics control scheme, that fails to impress us, and some unusually large maps, that are empty and riddled with enemies scenarios that seem to forget any problems and minimum to no reaction in most cases.

From the first level, which leads to that Nazi castle in the middle of World War II, which offer urban environments to the level in Texas, Maximum Games gives us a false freedom of decision in Alekhine’s Gun , something that does not fit and repelled in what should be the basic foundation of any stealth game in the third person. Yes, the scenarios are literally designed to make us wander around for two separate minutes, dodging guards, passersby and other enemies in our pursuit of goals, but we never believe that we have absolute control, in order to proceed level you need to play just like how the developer built, and by that what we mean there are no multiple routes to success.

Furthermore, we find repetitive routes and that are marked by the soldiers or guards whom you need to dodge or kill, so it will be very easy to hide from them and infiltrate the various locations and assassinate targets without triggering the alarm, in addition, we have a special vision that marks the enemies. Here, Maximum Games again inspire much in the first Hitman from IO Interactive, offering costumes and various camouflages, which will facilitate the game ‘s missions, especially if you decided to play in the recommended default difficulty.

Resident Evil 4 Remake is already underway and will arrive in 2022, according to rumors
April 12, 2020

This Silent Hill Remake made in UE4 looks amazing, but we never get to play it
January 10, 2020
Average User Rating
0
0 votes
Rate
Submit
Your Rating
0