Step into a-6-stories tall mech to become more than a simple warrior and become the savior of the humans while manning the best weapon of destruction; Archangel!

Archangel is the Pacific Rim game we always wanted

Fans of the big robots, with exponents like the film Pacífic rim and series like Evangelion we are in luck since the Skydance Interactive brings us a game that did not yet have anything similar in VR, although many gamers saw it as something that would fit perfectly into the concept of virtual reality.


All this comes packaged in the form of an on-rails shooter in a similar style that we have already enjoy in virtual reality, like Until Dawn: Rush of blood.

From the first moment Archangel shows high-quality production, after an introduction of more than 5 minutes that put us in situation and where we begin to glimpse that it is not another game more than just takes a few seconds to explain to us how to shoot and we Releases directly on the battlefield , but in this case we are before a shooter that gives a remarkable importance to a story in which sequences happen, flashbacks and conversations with our comrades during the battle, helping to put us in the situation of why Our struggle with the resistance against the tyrannical corporation HUMNX to try to save what is left of the United States, as well as empathize with our comrades,Know more about our past and ultimately get more involved in our role of savior within the Mecha we handle. 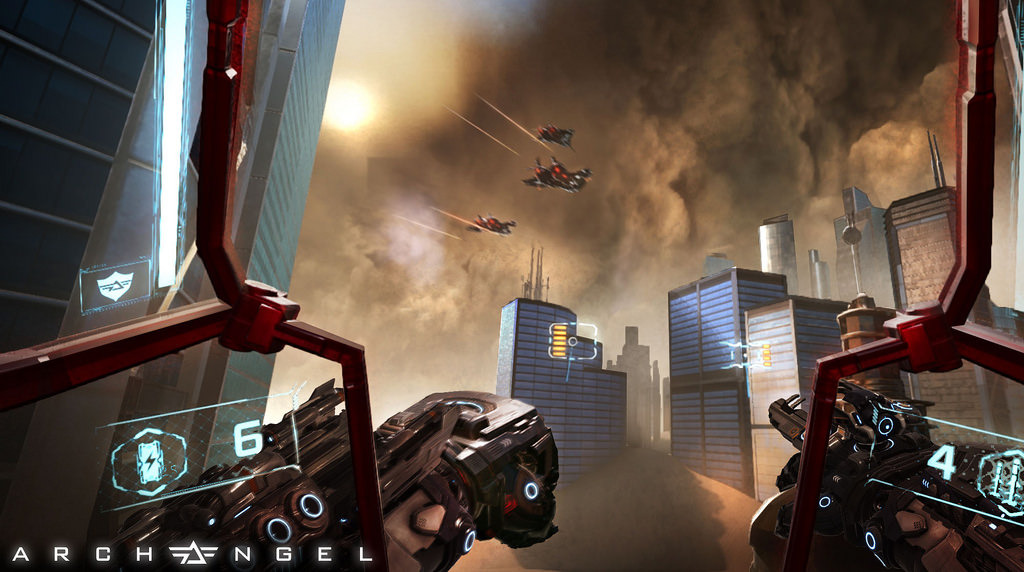 Even though the story is a generic one, it is satisfactory and well acted by the protagonist and his companions, so everything in relation to the story that is used as a guide to advance through the campaign. which is good news.

The mechanics of the game is simple, very complete and satisfactory, driving with the “PlayStation Move” controllers for each mechanical arm of our Mecha independently. 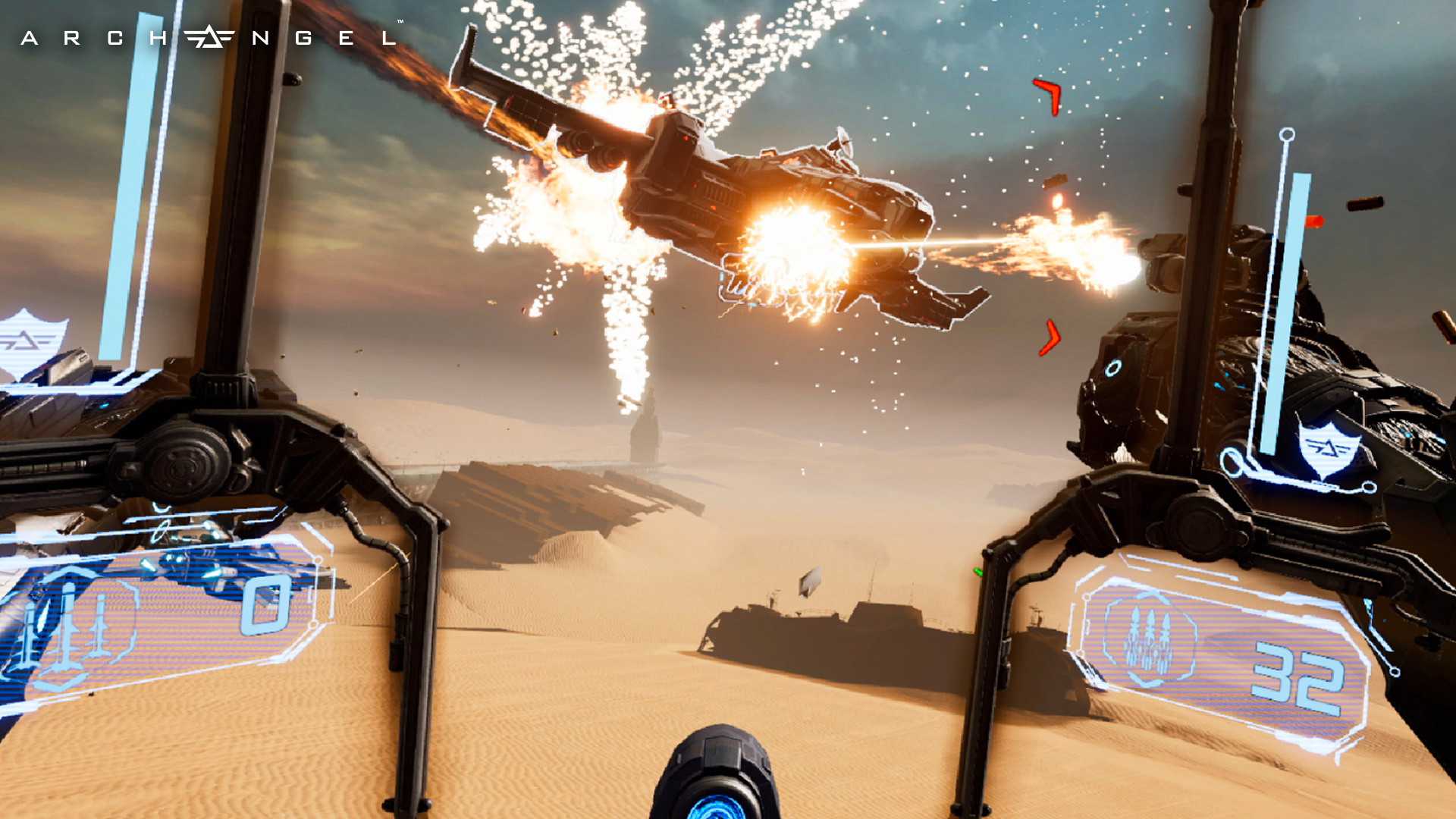 In each hand we get to handle a maximum of 2 different weapons, besides the shield that we can activate in each arm, being able to even use our own fists like a weapon. This game mechanic forces us to have a great coordination when enemies happen by land and air to both sides of our Mecha, reason why in few occasions (mainly at the beginning) we will find the crossed sights of each weapon, using a shield already Spent on one side and firing with the other hand almost without knowing where they attack us, which will lead us to die sometimes without knowing who to blame for our death. We could say that it is something like the psycho-technical examination that we do as part of the driving test.

This is not to say that it is a tremendously difficult game, especially because we have 4 difficulty modes available from the beginning, which take us from an easy way in which we will advance without big problems, although still some hard sections we fall before our enemies, overall Archangel presents a great challenge and that will make you sweat to advance in the campaign.

During our fight we will have to face humans, tanks, turrets, ships, and some other enemy that we prefer not to reveal, although what we can unveil is that the last 20-30 minutes of the game have seemed a real pleasure and a New example of how great this is of virtual reality in video games.

We can eliminate all these enemies with various types of shots such as submachine guns, missiles, and missiles, can move from one to another with the simple press of a single button at any time, there is no reload button, as all weapons are recharged Automatically after a short period once all the projectiles available in each of them have been unloaded, as well as the shields that also need a few seconds of recharge to use them for a very short period, so you will have to choose carefully when to use them not to become an easy open target at the worst time.

At the end of each chapter, we can spend the score that we have accumulated in every level, then spend it to choose different improvements for each weapon, shield or ability of integrity of our armor;  Improvements that will facilitate the subsequent tasks, with some such as higher recharge speed, greater damage, number of projectiles …

On the technical side, we are faced with a title that especially stands out as one of the games PS VR for it’s better visual aspects, being above what we are normally used to see, with very defined scenarios and good visual distance, environments are not a great variety of places, although this may acquire some sense due to being located in post-apocalyptic landscapes full of sand, forming a kind of immense desert full of abandoned old buildings without life. 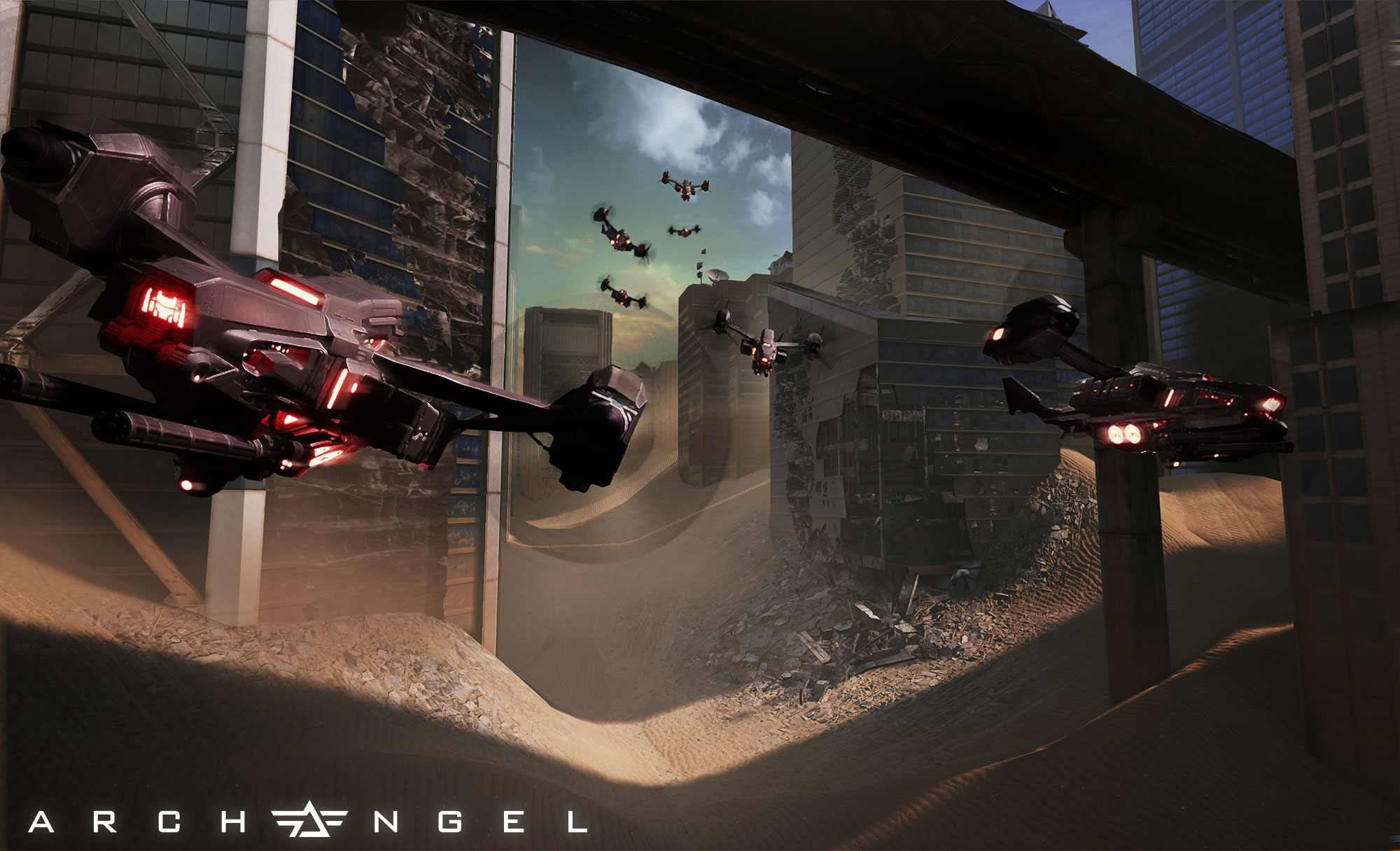 All our way will be accompanied by good sound effects and a correct music and epic enough sometimes to “believe” us even more and live the battles of this entertaining title.

On the opposite side of all the virtues commented is the fact of suffering from a certain limitation in the variety of situations , something otherwise expected when dealing with a certainly limited genre such as on-rails shooter, and that still does not come to become heavy in no time, possibly by another of the problems of the title that is the story can be completed in barely 3-4 hours and once completed  replayability , beyond the desire to overcome the game again with another difficulty or try to achieve Improve the whole wick, since there are not even just trophies that can push us to achieve some milestone to those who enjoy it, limiting in an incomprehensible way to only 6 trophies for the whole game.

Archangel is a very good game, with high-quality visuals but short duration, we always imagined how it could have been if they implemented a variety of modes to extends its playability, so we could recommend it more strongly as a remarkable game within the PSVR catalog.

The game was analyzed on a PS4 PRO, with the PSVR launch kit, it has also been launched on the other platforms on August 2.