Armello is the excellent debut of League of Geeks , an Australian developer that every gamer who like RPG should follow closely. With this launch they have shown that no mainstream media can still do a remarkable game in quite deep and complex genre , which undoubtedly will become a pleasant surprise for anyone who dares to try.

His initial presentation reminiscent of a mix of hidden power to Game of Thrones and Disney world by designing their anthropomorphic animals. You might think that this is a children’s game, but nothing is further from reality. That design for characters, besides being pretty good, hides an adventure that mixes traditional role, strategy, card game and a fantasy story with different views depending on the selected clan. A terrible threat hangs over Armello and King is cursed, who will face his follies?

There are four clans / races they intend to overthrow the corrupt lion: rats, rabbits, wolves and bears. An extensive preface allows us to play with them and learn the avalanche of information from this game, but with enough calm and practical examples so that the newcomer will not be intimidated . Overcome stage tutorial, choose one of the clans for their motivation or profile-the wolf is more prepared for combat while using more letters. 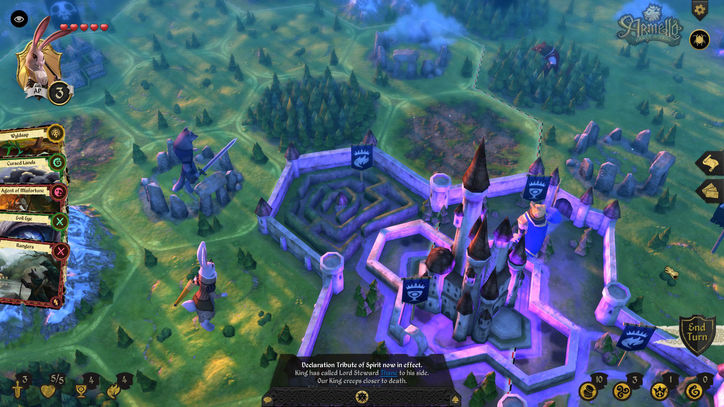 The map is small but has a variety of boxes and many possibilities.

One of the most important factors in Armello is the valuation of prestige , a score we get to overcome missions found in the map of hexagonal cells-our movement is limited by a quantity-, control cities or kill the other three heroes acting on their own.The King takes into account the prestige of the clan’s worth at the start of each day and this allows us to choose between two decrees, such as the payment of a sum of money, enable attacks on villages or other event in general negative.It is always better that this decision remains in our hands with the intention of torpedoing rivals that of a human opponent or artificial intelligence.

Many are the rules of game Armello, but we will summarize the most important. The aim is to defeat the King, and there are many ways to get the victory . The most obvious-more power to accumulate enough letters of a different-hundred and weapons to confront him directly in combat. Or you can pick a number of special stones randomly appearance and take the castle, or endure until the disease runs with the monarch to rise as new successor for having the highest accumulated prestige. The duration for the latter depends on shifts and would be around the time starting.

At the beginning of each day will elect the new director of the King.

In the center of the map is the castle, usually guarded by guards, and around the game world. It is not a too wide area, developers have preferred the action elapses in a controlled space where death which makes you restart from your base- not penalize too. However, with the pressure of a deadline and the reduced number of steps boxes may cause the missions that interest you stay away, so there is some pressure to reach a particular point or chase a character-for example, by acting leader in prestige.

What will be the price of PS5 according to its specifications and components?
October 11, 2019