The Assassin’s Creed is probably most popular series from Ubisoft that everyone knows. It is normal that with another installment releasing every year series began to show too many signs of exhaustion, then Ubisoft gave it a break. After this break comes the new installment of the series, which shows that Ubisoft has a lot under their sleeves.

Assassin’s Creed Origins is a third-person action-adventure game, in an open world environment. New game continues on the basis laid by the franchise in the past but updated with some additions. These additions are practically in all similar open world games like CD Projekt’s Witcher, Horizon: Zero Dawn and I‘m sure we’ll also see similarities in Red Dead Redemption 2 when it comes out. 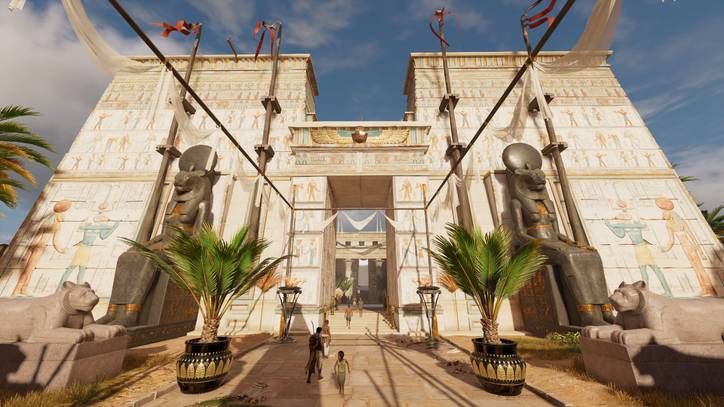 If you’re wondering what are these novelties, that didn’t appear in the previous installments are RPG elements such as leveling up, getting new weapons, improving them, which is not groundbreaking, although now more depth has been added to this system. Perhaps the most important new addition is the design of missions and combat, one better resolved than the other. 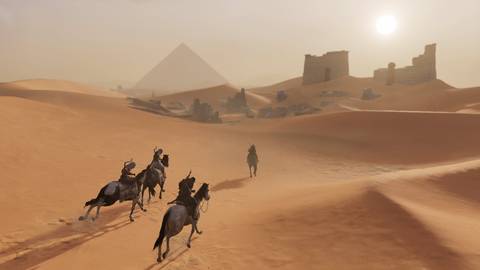 The missions have seemed to us more like The Witcher, with situations that take us from one place to another, and things get entangled so what ended up doing in the end usually had little to do with what we were doing at the beginning. It’s a good way to the missions interesting and entertaining, although they are not as original and fun as The Witcher 3: Wild Hunt.

Ubisoft has made a great effort to brought us a game that has a variety of missions which was a repetitive issue in previous installments. There is a lot of “expendable” content, and the game rewards us for absolutely everything. In this ancient Egyptian setting, some of these missions ask us to explore areas to find papyri, and these papyri have a riddle about a map place where a treasure awaits us. Much more dynamic and interesting than “rescuing the children that are forced to work at a factory for the twentieth time” if you got what we mean.

Secondary missions are not so secondary because there will come a time in the game where we will have to do some of them to level up. These missions are also, more original and more entertaining than usual.

The other aspect that we mentioned earlier was the new combat mechanics which has left us a bit down. On one hand, we like the idea of a less rigid system, that offers very well differentiated weapons, and a dodge button plus a shield to block. On the other hand, we think that the implementation of this combat system is a bit clumsy, and it has taken us a long time to get used to it. 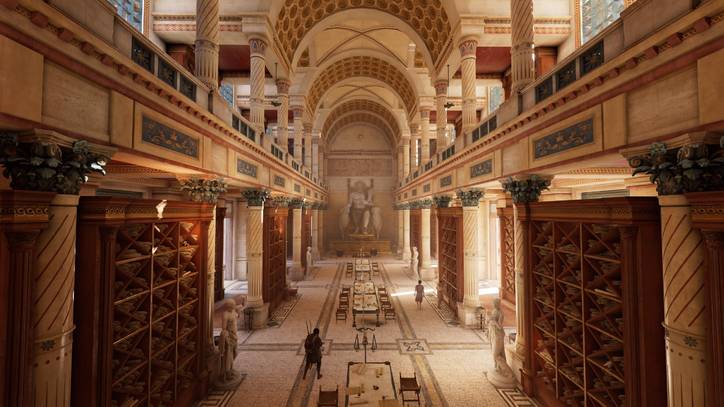 Perhaps, the “problem” is that our character does not seem to go for the enemy to hit, even if we have him locked to the enemy, sometimes we see ourselves swinging thin air than the enemy and it’s frustrating at the beginning. Once we get the hang of the system we have been able to enjoy the combats, although we can not avoid the feeling that the execution has been a bit clumsy, especially for one of the most important elements of the gameplay.


Luckily, we have the infiltration as plan B (or even as plan A), which works much better, as is usual in the series. We have many options and routes to deal with each situation using stealth approach, and only the artificial intelligence of the enemies prevents it from being even more interesting. We can whistle to drag them out to our location and kill them, and they will come kindly to receive their execution. It is also easy to mislead them, so if we fail, we can always “get lost” and start over. 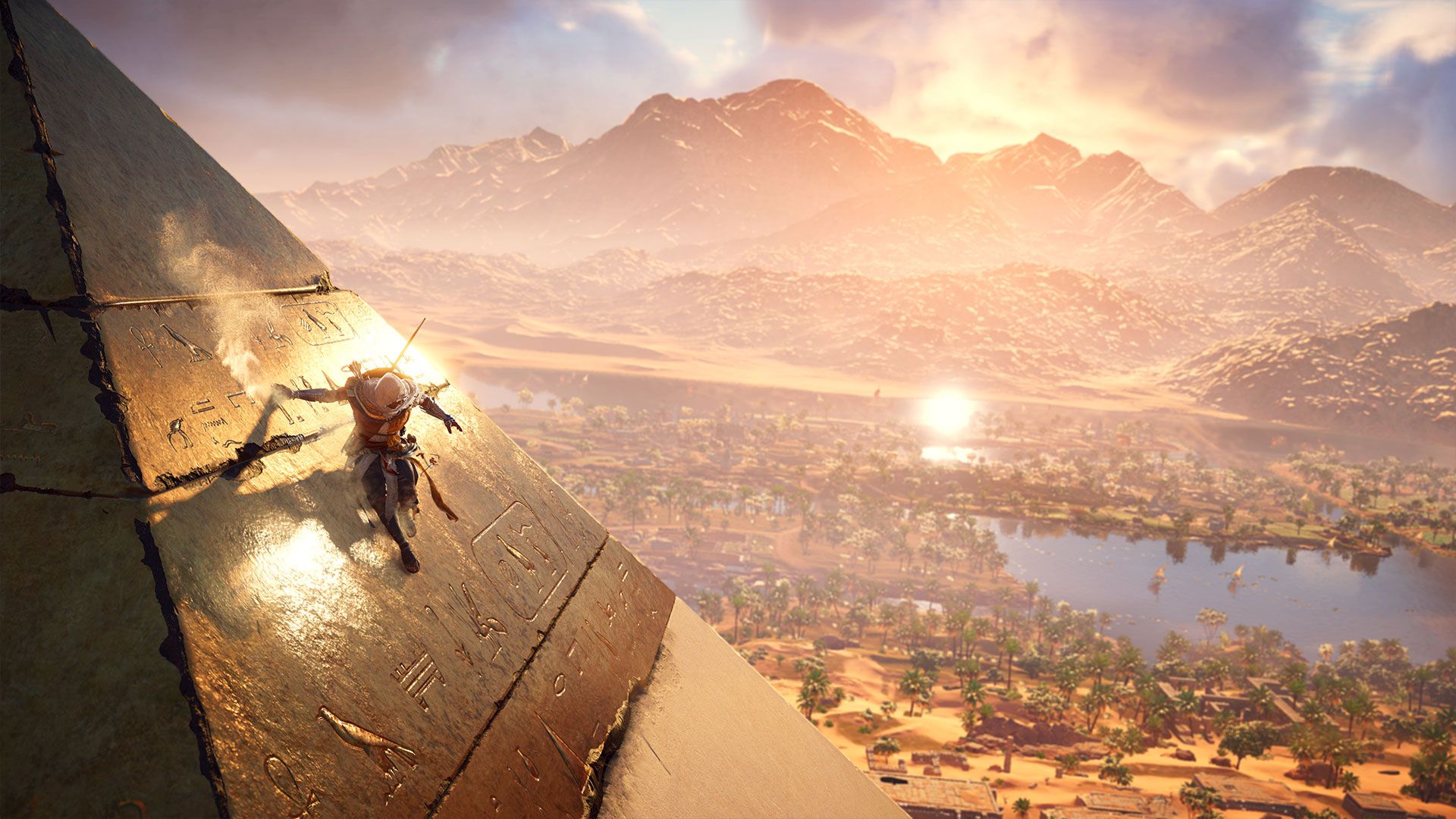 Obviously, this installment comes under the idea of change, of renewal. Many people may think that it is not an Assassin’s Creed, but we believe that it knows how to maintain all the pillars of the series. There are the watchtowers, there is free parkour, there is infiltration, there is combat, there are hidden collectibles … Ubisoft has simply made it something more agile, dynamic and current, something that feels pretty good and overall very much entertaining. 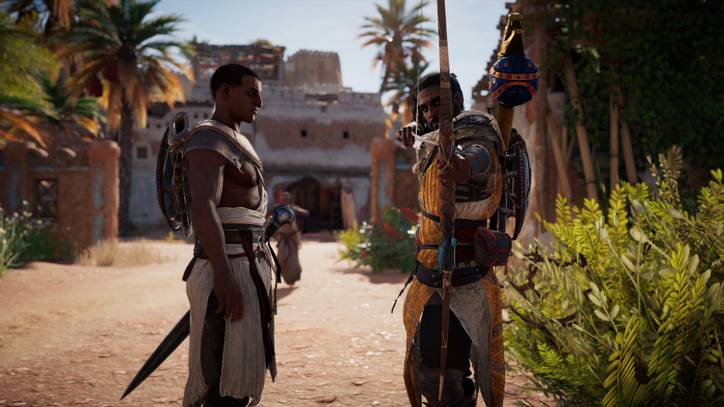 It has new additions that are related to this ancient setting, as is the exploration of tombs. These are part of both primary and secondary missions, and although they are not a particularly difficult to complete, they offer us a fresh experience. We believe that Ubisoft has managed to give us that feeling of being in an era where treasures were more or less usual, and enhance that exploration we mentioned before.

Senu, the eagle that accompanies us at all times. The “eagle vision” was already present in other games from Ubisoft, and in this delivery it simply becomes literal. We can summon Senu at almost any moment, which will help us locate enemies or points of interest on the map. It works a bit like the Watch Dogs 2 drone. 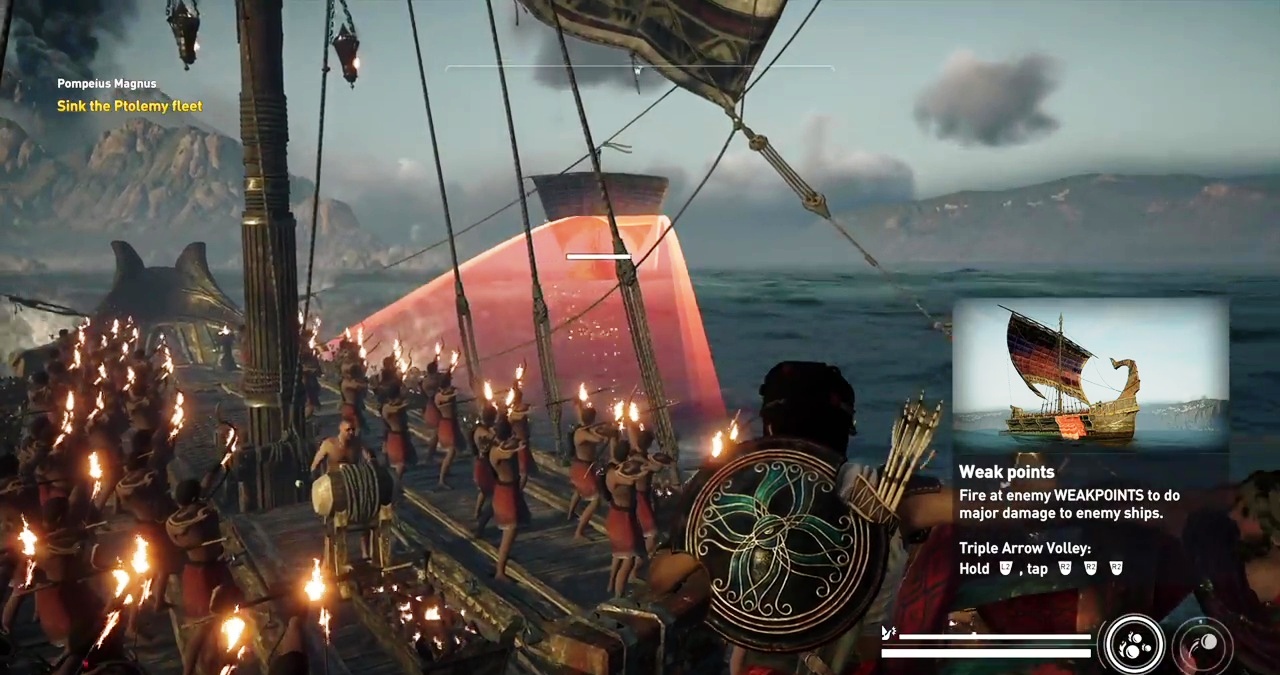 There are more elements of the series that carried over such as horses and camels, the sequences in the present … and other things that we are not going to spoil.  About the story, it is clear how the team has tried to do something deeper, although we believe that in the general story(main quests only) you do not get too much, it does seem to work better in the(side quests) story of our protagonist. In main quest line, we have a bit of everything. Some secondary missions have an interesting argument behind, and others are just an excuse to take us to certain areas to do something.

A Giant World to Explore

If anything, Assassin’s Creed Origins stands out because of the world in which it develops. Like many people we are also passionate about Ancient Egypt as well, so you can imagine how much we enjoyed this adventure. The level of detail and art they put to recreate the ancient Egypt, the realism, and life with which the scenarios have been offered with Origins has left us simply mesmerized.


Being able to recognize such iconic locations as Alexandria, even the littlest details that tell us about life in Ancient Egypt, or being able to see what some of the most recognizable points of today looked like thousands of years ago is priceless. The task of recreating this era has had to be gigantic, and we are already looking forward to the launch of the virtual museum that will arrive next year.

On a technical level – to say that we have played it on PS4 Pro, with HDR, with gigantic scenarios that become very complex and this game looks just beautiful. Cutscenes are deliberately blocked at 24 frames per second – they always go that way, regardless of the complexity of the cutscenes – the game clocked at 30fps with a fairly stable rate. 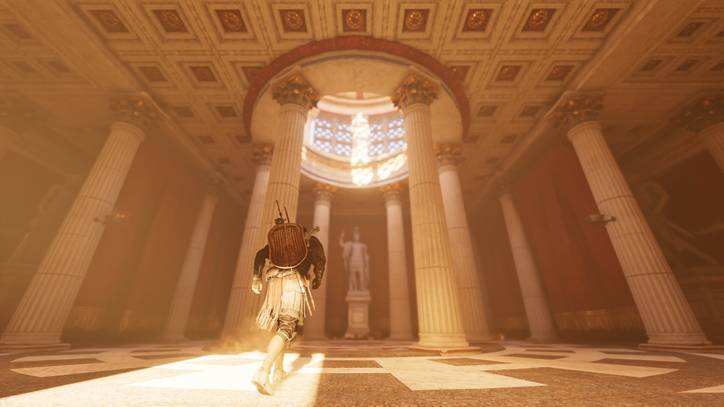 Also, we do not know exactly what resolution it will have in PS4 Pro, but the image is sharp and clear on a 4K screen, without any jagged edges. You can see some popping on time, but nothing serious considering the scale of the scenarios. And speaking of the scenarios, the map is gigantic, and mostly we are going to find a lot of desert, although there are more settlements, caves, camps, and cities than you can imagine. 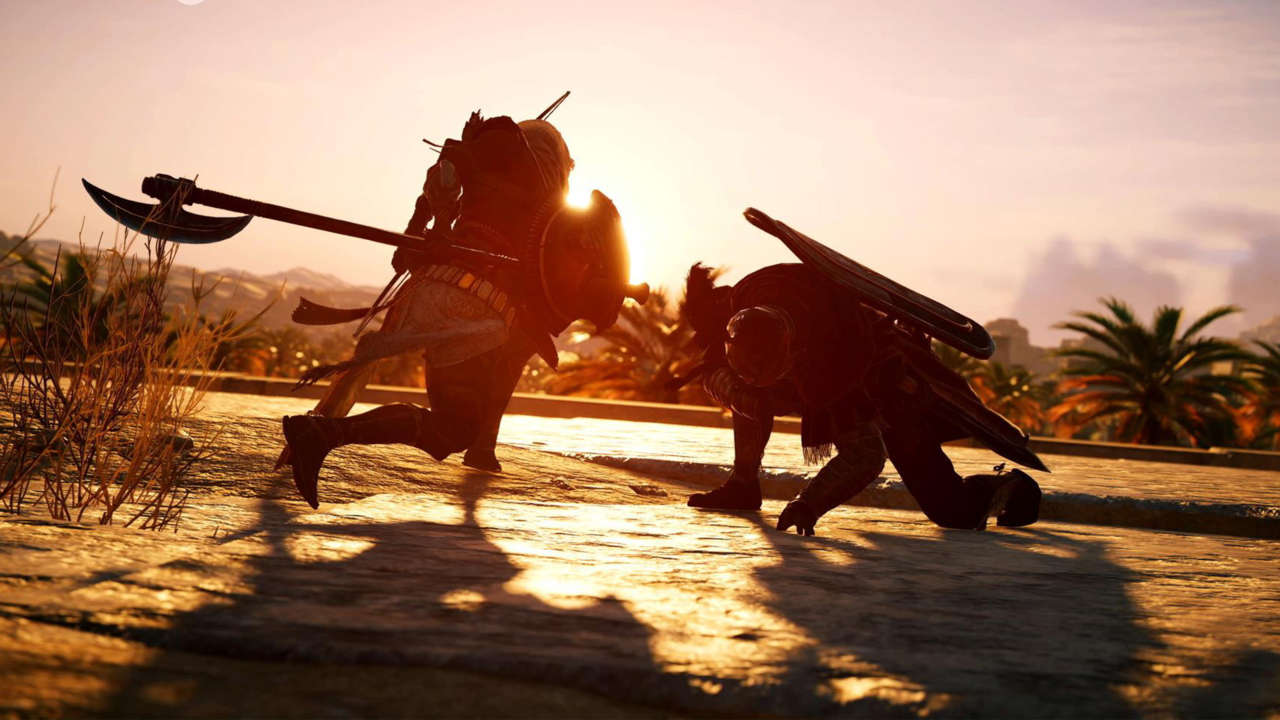 Although the main analysis we have done in PS4 Pro, we have also been able to test it in a normal PS4, and the results are equally positive. The game plays very well, and the draw distance looks and the effects are still surprising. It seems, however, that loading times are longer on this platform. 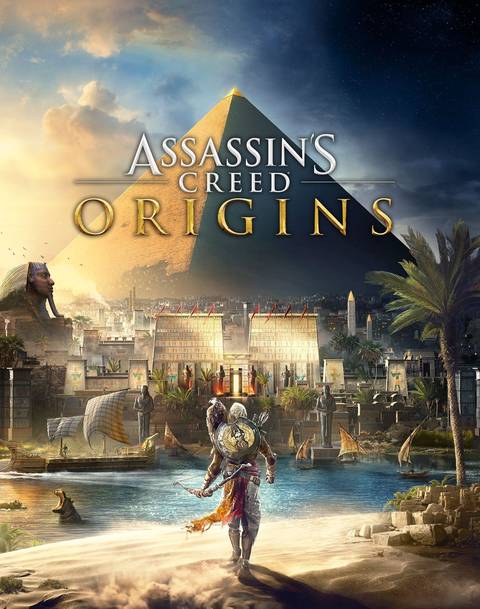 Assassin’s Creed Origins shows that Ubisoft is the master of their craft. It maintains the essence of the series while updating it, and tries -generally successfully- to solve some of its problems, offering secondary missions and more interesting optional challenges, and a protagonist with a greater personal background. And best of all, he does it with a world where we like to get lost, in which we enjoy simply walking through the streets.

We still wish to see something more innovative, maybe even a unique feature that would take the series beyond, but it is undeniable that Assassin’s Creed Origins is a step in the right direction. If you were ever interested in the series, we believe that you have to give this one a chance, and if you love Ancient Egypt, you will enjoy immersing yourself in the world that Ubisoft created in Assassin’s Creed Origins.

We have prepared this review on a PS4 Pro with a download code provided us by Ubisoft.