The war of the future brings fresh air to the series , nothing revolutionary yet improvement in all aspects comparing to previous installments.

If for ordinary mortals television commercials of toys and perfumes or decoration malls warn them of the impending arrival of Christmas, for us players that makes us recall the Call of Duty shift, which always comes at this time. Since the show gave the real pitch with Call of Duty 4: Modern Warfare in 2007, its popularity did not stop growing, with an unstoppable rise in sales, reaching its peak in 2011 with Call of Duty: Modern Warfare 3 . Since then neither Call of Duty: Black Ops II (2012) and Call of Duty: Ghosts (2013) have managed to overcome the sales of this, and the signs of exhaustion in the series are obvious, having lost any capacity for surprise, but thanks to its addictive multiplayer remain great games.


What most disappointed last year’s delivery is not exploited at all the arrival of the new consoles, PlayStation 4 and Xbox One, to give a true leap in quality, and actually got quite the contrary, one of the Call of Duty worst rated, both by the press and by the players. This year, with the new consoles already established, comes Call of Duty: Advanced Warfare , created bySledgehammer Games , which are released in the series after collaborating on the development of Call of Duty: Modern Warfare 3 . With a new development cycle three years , something we take pride in Activision and seems a good idea, this time it looks like we expected him to do a set of new generation , at least the minimum required, and the multiplayer has received a few new that give freshness , without spoiling too much that has always worked so well.

For several years Call of Duty is based on three pillars, although one is the largest, robust and vital. A player campaign linear peliculera and spectacular, and it’s not surprising that although more or less entertains; a way cooperative multiplayer , which either against soldiers, zombies or aliens company provides good fun, and the cornerstone, the competitive multiplayer , the reason for the product that millions of players around the world spend dozens of hours each year, and although many have tried to imitate games, almost none, doing something, it has managed to overcome. 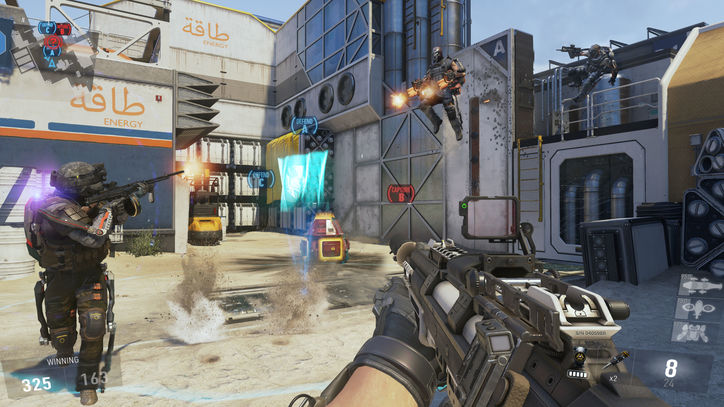 You’ll have to get used to shoot and shoot down enemy from the air.

Call of Duty: Advanced Warfare comply blindly with these three pillars, and at least two of them, far exceeds the delivery last year, what the truth was not too difficult. If you expected a revolution within the go away forgetting series or campaign, or the cooperative or competitive stray too far from what we had seen earlier, and no surprise in that regard. But if what you expect is a good Call of Duty , which has the news just so you do not feel like more of the same, and that looks graphically pretty well, we think you are going to feel satisfied with what it offers.

The war of the future

Jonathan Irons, is a complex, deep and very intelligent person, but villain or ally?

Since the beginning of the Second World War, the series has continued to move forward, and Call of Duty: Advanced Warfare gives his biggest jump, leading up to the year 2054 , in which the war using the most advanced technology, as combat drones, stealth suits and exoskeletons, a kind of armor or second skeleton that give the bearer great powers in combat, can strike with superhuman strength, glide through the air and giving huge leaps. In this context, a terrorist group decides to attack the Western world and try to bring it to the stone age, leaving him without any technology. Attacking nuclear power plants get and plunge the world into complete chaos, but private military corporation Atlas, with the charismatic Jonathan Irons command (played by the famous actor Kevin Spacey), comes to the rescue, trying to resolve the situation.