A detail that seems quite important is that not die so easily , with just the touch of a shot as Call of Duty: Ghosts , and is now much more reasonable, we can get a few shots and reverse the situation. He had gotten out of hand in the latest installment, and turned a game that was always fun, in at times frustrating. This may sound anecdotal, but those who have played a lot of different multiplayer modes of the series, you know that is really important. 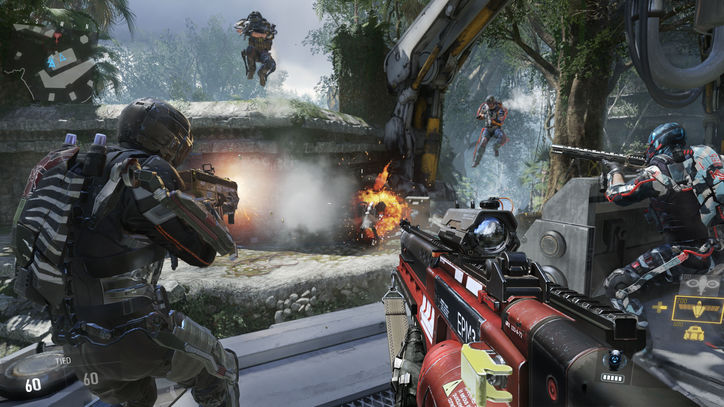 Exoskeletons well as to move more dynamically and perform double jump, the most important action, also have a special ability called exo fitness . Coupled deploy a portable shield to protect us from the shooting, silence footsteps, generate health above normal levels, make us invisible, glide through the air, or watch for a few seconds to enemies through walls. And though it might have been easy for these skills are out of hand, measures are fine, not unbalance the fighting.

The design of the 13 maps is between good and outstanding , are well suited to certain modes of play, but for now only two or three of us seem outstanding, and that will be remembered in the future. Sometimes we have some elements that we can interact, for example some barrels of acid, which can shoot so that its contents damage to enemies, and in some of the maps are special events, like a tsunami that floods the stage and the I really do not add anything substantial to the game. They have tried to do something similar to this Levolution of Battlefield 4 and has come to nothing, that’s the truth, I have not included better. 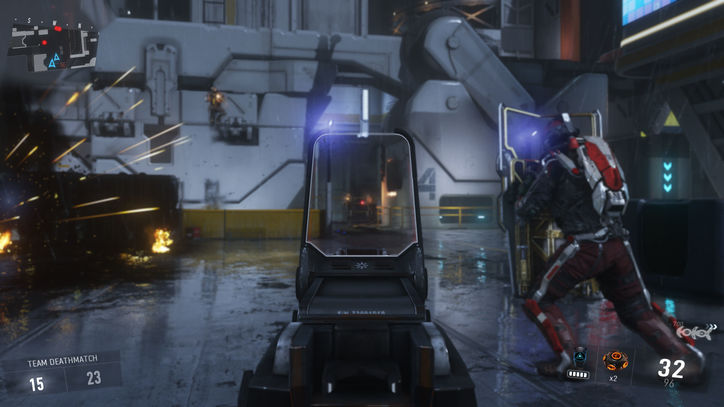 One of the special abilities allows us to deploy a shield, like you see in the image.

As for game modes, we again have a huge variety to choose from, returning some ways demanding fans as the classic Capture the Flag and the fun hot spot, which we love. As a novelty, we Link , a kind of rugby game where we have to put a spherical drone in the “goal” enemy, as if it were a ball, something like Bola Loca saga Halo , but here with the aim to score goals to win the game. The grace is that we know at all times on the map where the ball is, and the wearer can not shoot, so it is helpless, but can pass it to teammates. From our experience we felt quite original and fun way to see how the community welcomes.

These are some of the most notable developments as there are a myriad of small new details. For example gusts of points can be customized by changing its effectiveness as the damage or how long they last, but instead become more expensive, harder to get.There cooperatives streaks , when a teammate displays a drone, you can join and shoot with him. We have a new system of rewards after each game, some boxes with surprises inside, weapons, equipment, accessories and advantages, double experience, we can use temporarily.

In the customization menu is a field of virtual shooting , which we can instantly access by pressing a button, and allows us to prove that we equipped weapon without having to experience during actual combat. And it has done much emphasis on the visual character customization , choosing between different helmets, shirts, gloves, pants, boots, etc., something we think is anecdotal in an action game in first person, which also does not suit wear a dress too flashy if you want to become an attractive target with legs.

Finally is talk of cooperative multiplayer Survival Exo , equivalent to zombies or aliens mode of the last supplies, which has disappointed us a lot, we do not seem so worked like this. To begin with because we played in the same maps of competitive modes, have not created new scenarios for the occasion, and because although it is quite deep, it is still a way horde more elaborate than usual , something that is very seen by now.