An entertaining, open world action game with an interesting and original mechanical world, which becomes a remarkable first episode of a franchise that holds great future.

Watch Dogs is an ambitious and entertaining open world game that we really liked , and to which we still spend many more hours after writing this text, which can not be said of all games. Developed by Ubisoft Montreal in collaboration with other studies of the French company, the creators of the seriesAssassin’s Creed and Far Cry 3 shows its extensive experience in the genre of the sandbox, using all the virtues and avoiding almost all defects games open world tend to bring.

If his spectacular debut in the previous generation with the first Assassin’s Creed proved to be a game with a great concept that ended not jell, being repetitive and tedious, lack of variety among other things, something to be fixed with the following supplies, Watch Dogsare much better first episode of a new series to which we see great potential for the coming years . It is huge, varied, always entertaining and original touches is allowed, which is not easy at this point, giving it its own identity, personality. Its distinguishing feature, hacking, in a combined action in which, stealth and driving have equal prominence.

Watch Dogs was developed in the US city of Chicago , in the near future in which all technology and information of this great city are connected by a host operating system (FIS) , which controls everything. We are an experienced hacker, Aiden Pearce , who using a mobile phone can connect to this network, and use technology city at will. Knowing the personal information of all citizens and steal data and money from their accounts, change the color of traffic lights, turn drawbridges and move through surveillance cameras, even inside homes if at least these have a webcam, and perform as dangerous as underground steam pipe burst actions. 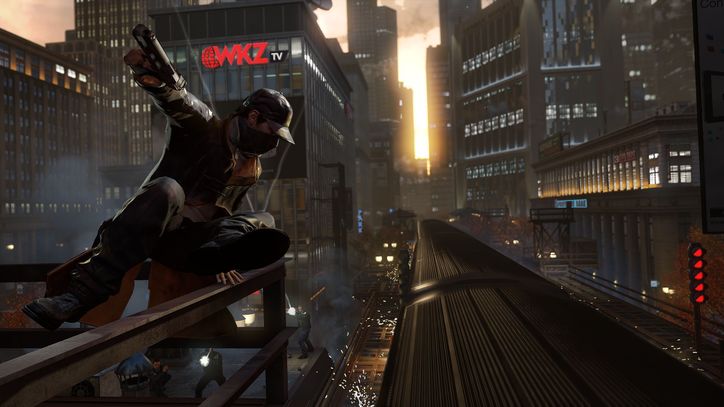 History tells us how one of his many illegal work goes wrong, and this will backfires and ends up affecting your family, losing a loved one at the hands of criminals being. From this point it will seek revenge, trying to find the culprits, and along the way will face all kinds of dangers and discover the darkest secrets of the city of Chicago. Too simple story for the amount of hours it takes , that stretched a little note and could have been more ambitious, we find the most interesting topics in sub-frames or specific events. We wished for example to know more about the past of our hero, why is a hacker, since we hardly know anything about him, and neither side nor the villains are memorable, although there are some character with charisma.