While First Person shooters in recent years reaches the end of a generation and the beginning next one with a somewhat loose campaign thats without any major innovations, yet multiplayer remains as addictive as ever.

In less than a month two new consoles coming out, Xbox One and PlayStation 4, the successors of the veterans Xbox 360 and PlayStation 3, who have supported us over the past eight years, one of the longest generations of video games living memory. Lists of the best and worst games of the generation of the most influential, the most successful will be listed, and it is certain that in each of them in one way or another the name of Call of Duty will appear, which is one of the most important franchise in recent years.


As for economic success, popularization among the general public of online multiplayer, the way it has influenced all the games of first-person action with his particular way of understanding gender, guilty that today is more important one shooter multiplayer and even the campaign to fashion the use of the latter term-, prioritizing the player experience above the spectacular playable freedom, and many other things, one of those important games They are able to change the industry forever.

Today for to know as precisely as possible the popularity of a video game series, rather than seeking their sales figures, we should measure it by the amount and activity of haters or “professional haters” who do not hesitate tirelessly on each new news, video or article us know all wrong, counterproductive and even unhealthy that is the game of the day, and if we use this yardstick to measure the popularity of Call of Duty, no doubt this is a undisputed king.Among the tide of criticism in a large percentage furious and irrational, unfounded and they argued views, which often go unnoticed by the noise they make the most visceral also hide.

Activision does not seem to have heard about or others seen the results of Call of Duty: Ghosts, a game that repeats the worst tics of the series and even magnified , whose continuity and lack of ideas, something that is not new and that has made ​​several deliveries, it is more evident than ever, as it rains, it pours. The single-player campaign, despite what we were promised, a slower and less “popping” development returns to the comings and goings of scripts , extreme situations, facilities blown up, battles in which difficult to distinguish your allies from enemies and when you do not know exactly why you’re fighting, times when you catch a turret or a vehicle of war curiously handle all alike, either a helicopter or a tank, scenes in slow motion after knocking down a door, and ultimately everything that you can expect from a Call of Duty. 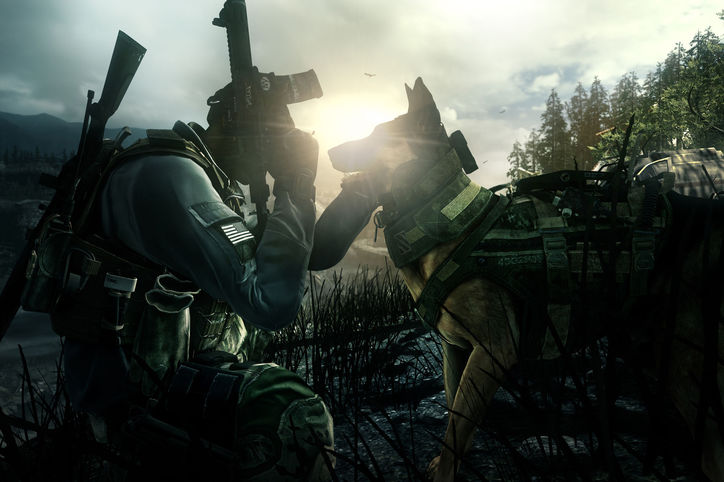 Ghosts are supposed to tell us a new story, more intimate smaller scale, starring two brothers struggling to survive in the near future in which the United States has been invaded by a federation of enemy countries , in a situation inferiority conditions, having to act in the shadows and unnoticed. But this argument context, interestingly used many time before so this is not to first time we are facing it , with massive and spectacular battle, with a couple of missions and stealth elements used partially, the curious use of the dog at the beginning of the adventure which then disappears and it has only served to make jokes on the Internet, and Modern Warfare 4 could well have been called, and we do not see any difference with the previous titles.