Time management is our biggest challenge in this unique police simulator game.

There is something special about Beat Cop, an interesting police game, different from what we used to see in video games, which almost always focus on action or at best, detective investigation. In Beat Cop the shots -never better said- do not go around, since it proposes to interpret a neighbourhood policeman in his ordinary routine. Precisely the most realistic aspect is that it consists of making fun – at least, at times – let’s get into more depth.


We play as a detective who is offered one last chance after being accused of a murder of which he is not guilty. Although, we have no choice but accepting this new position that is very challenging because we have to deal with three fronts: the work we do, with a boss who imposes a very demanding series of tasks, the opinion of the citizens and the mafia. And it’s not always a quiet day, on the streets of Brooklyn, anything can happen, from small thieves to confronting shop robbers or the report of giant cockroach that’s closing premises. Can you solve the mystery of your cases while surviving the harsh streets?

Beat Cop uses a proprietary development of point’n click adventures with a time management system. It is not about looking for clues with calm, thinking and collecting items, but about carrying out the commissions of our new position. At the beginning of each day, our bosses will give us a series of tasks to fulfill that are usually related to a minimum of fines to be placed within our schedule. In this way, a large part of our work is dedicated to monitoring cars parked in front of a street.

There are a number of problems with these vehicles that require our attention. Some stop in prohibited areas, your ticket expires, one of your headlights is broken or the tires are very worn. Sometimes we even look for a suspicious car with a very specific license plate. So there is no choice but to look at the cars that are parked and in case of finding a violation, put the fine and call the tow truck. This part does not have more complexity, but our work is far from simple as the hour’s pass. 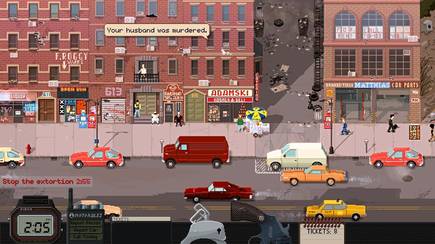 Beat Cop works with a time limit, a little reduced we would dare to say, in which we must fulfill our duties and many others that arise on the fly. The game is designed so that you can hardly do everything available in that period, something that will force you to make decisions. A call informs you of an altercation, make a call – you must find the nearest telephone booth – and many other objectives that change depending on the situation. And on many occasions, you yourself will see a criminal fleeing through the streets that you must stop.

These are just some of the many examples of tasks that will keep you busy constantly. You need to comply with your police order, but citizens will also be asked to go to one of the stores on the other corner of the street. You have to control time without obsessing to the limit because it is allowed to fail. Yes, this affects your salary, but it is almost always impossible to satisfy everyone.

A curious aspect is the moral decisions that haunt our police. There will be a few occasions that just at the moment of putting the fine the owner of the car tries to bribe us so that we forget the matter. Here you can choose to be a good or bad cop, extra money never hurts to pay off debts – and almost always is the best once you have complied with your work quota – but you will also stop fulfilling your duty. Do you participate in timba? Are you going against the mafia? What are you doing with the drug dealer around the corner? Not that these stories have a huge weight in the game, but with different endings and flexibility to deal with certain situations, we can say that it is more replayable than expected – in fact, there is an option to repeat days if we wish. 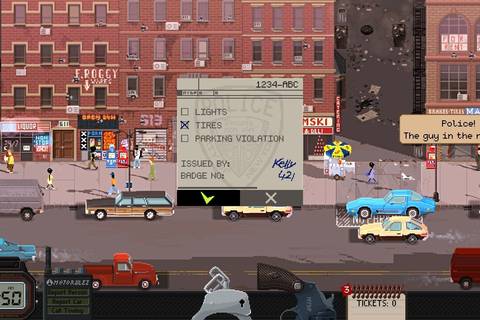 Since the last beta, the study has made some changes in the right direction. Exhaustion from running is more permissive, and it will not be so easy to lose your breath to run after a thief. However, the resistance system remains, which will be exhausted with the passage of hours and actions; a hot dog – after payment – will replenish our strength. The office screen has also been remade by another much more consistent with the pixel art style of the rest of the game. The streets give a feeling of being much more animated, especially by the increase of pigeons fluttering through the houses.

As it seemed to us in our impressions, Beat Cop does not delve too deeply into any of the aspects that it touches. It is not a graphic adventure in the classical sense and mechanics becomes very repetitive in a long game session. The developers have strived with dialogues full of humour – sometimes with grace, sometimes not so much – and a variety of situations. One day we have to be aware of a character with a tendency to enter liquor stores or the sex shop, random thieves appear, we must warn of a murder, look for a suspicious vehicle or character, fine every vehicle that parks or start a shootout against robbers. And always in the background is the issue of progress in our research.

However, it is no less true that most of the time, and due to the strict system of objectives that they impose on us, every day we must be aware of vehicles and a series of monotonous events. Checking defects or faults in cars is as little entertaining as it sounds. Once the theme loses its grace – because it is true that the approach is original for a videogame – we fall into the routine of checking tickets and entering premises, stressed by balancing the constant problems of people with the requests of your superiors. A very stifling rhythm that does not help to enjoy the atmosphere and this peculiar -although not very broad- the neighbourhood of a lower middle class.

Beat Cop is committed to a pixel art aspect without its own personality, although it does transmit a lot of activity. We did not expect less: traffic, pedestrians, bands of pigeons and details like the noisy neighbour that goes out to the window to play very loud music. This is accompanied by sound effects that recreate this city with great success. A pity for the lack of music, because when it sounds – the main theme is very eighties – it’s good, but during the game, it hardly has a presence. 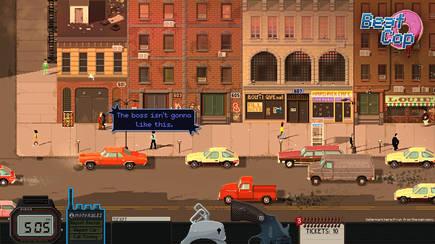 Although it does not manage to exploit its full potential, Beat Cop is an original proposal that deserves our attention. Its biggest flaw: time management ends up shadowing its successes. Too many simultaneous tasks and the main one being the vehicle revision later becomes a very mechanical job that prevents us from enjoying the small stories of the neighbourhood. Well, nobody said that the life of a policeman was like in the movies.

We reviewed the title on both PS4 and Switch with digital codes provided by Terminal PR.

This is the fan project that wants to recreate the original Mortal Kombat at 4K and 60 fps
November 29, 2021
Average User Rating
0
0 votes
Rate
Submit
Your Rating
0