A game that the creators of Wonder Boy never finished finally finds a physical release, much to the delight of old-school arcade gamers. Let’s see if this laborious pixelated restoration project has been worth it.


Beyond the final result that a game like this may have, the mere fact that we are commenting on the arrival of Clockwork Aquario in 2021 should be a joy for retro lovers. For those of you who don’t know its history, Clockwork Aquario was a project for arcade machines that Westone, the company responsible for the Wonder Boys, had to cancel in 1994. Decades later, Inin Games has restored and finished it, under the distribution of Strictly Limited Games . And finally, after suffering its delays, Clockwork Aquario arrives on PS4 and Switch so that we can see and enjoy this project that has been in limbo for 27 years. As the legendary Ryuichi Nishizawa and the restorers told us in an interview, the game was incomplete when it was abandoned. It was working with tools that no longer exist, so a good part of the game had to be rebuilt. Graphics and sound. But they succeeded, and, before us, we have an action arcade platformer, which is somewhat reminiscent of games like Wonder Boy: Monster Lair. We must choose between 3 heroes: Huck, Elle and Gush, to overcome platformer levels plagued by windup enemies.

Aside from their fun animations, the heroes have the same moves (although the Gush robot is more enormous), and the goal is simple. We can stun enemies by jumping from them, hitting them from below or hitting them head-on. If we approach them after that, we will catch them and launch them to eliminate other enemies from a distance. We can keep them in hand for as long as we need, so while the dynamic is simple, we have some “strategy” to reserve that shot. We can also take a “warning” hit before losing a life, and if we find a potion, we can heal ourselves. There is also a star that makes us invulnerable and more aggressive for a few seconds or a few diamonds. Those diamonds fill up an extra life meter that, when filled… Well, you know what it gives us. We can also earn lives by accumulating points, either by eliminating enemies or executing combos to explode the balloons that we find. The five levels that we see usually have a “mini-boss” in the middle of the route, and a gigantic and bizarre final boss always awaits us, which is a kind of mecha controlled by the villain of the game.

As you can see, the rules are simple, although sometimes the challenges are complicated to the point that we almost lose several lives in a row without realizing it. Well, after all, this is an arcade, and it has to be a challenge… Still, the difficulty curve doesn’t seem well smoothed out, and sometimes it reaches excessive peaks, which mixes with unnecessarily easy challenges. In any case, and although it is possible to play solo, the natural grace of Clockwork Aquario is in playing doubles cooperatively since the game was conceived for multiplayer. In this mode, we can jump on the other player to get higher or pick him up as a projectile without getting hurt. In addition, only in multiplayer can we access bonus phases in which we have to shoot the balloons that our partner has behind him before he does the same. Whoever pops other people’s balloons first wins.

As you can imagine, all these multiplayer dynamics give rise to very crazy and fun moments. However, it is true that, since the game is so colourful, sometimes we can lose sight of the character between so many tiny stars and explosions. And it is that, if there is a sensation that the game conceived by Westone wants to convey, that is joy, seasoned with a great sense of humour. The characters don’t stop making faces or crying when they are hit, and it is very nice to see how they make a complaining face when they receive a hit. Everything has that uninhibited, colourful Wonder Boy vibe but reimagined with a steampunk twist for the game. Without a doubt, it breathes that ” Japanese charm ” that the arcades of the 80s and 90s had.

By the way, the music is by Shinichi Sakamoto (the composer of the BSO for Wonder Boy III, among others), and it’s an absolute joy. The characters have some digitized voices, but they are not of good quality and tend to repeat themselves. And, of course, since this game has so much history, the developers have packed several surprises for the fans, in addition to playing in 3 different difficulties (which differ in the number of “continues” available; basically, we can unlock Recreational mode to continue as many times as we want and even access the machine’s service menu to fiddle with its options. 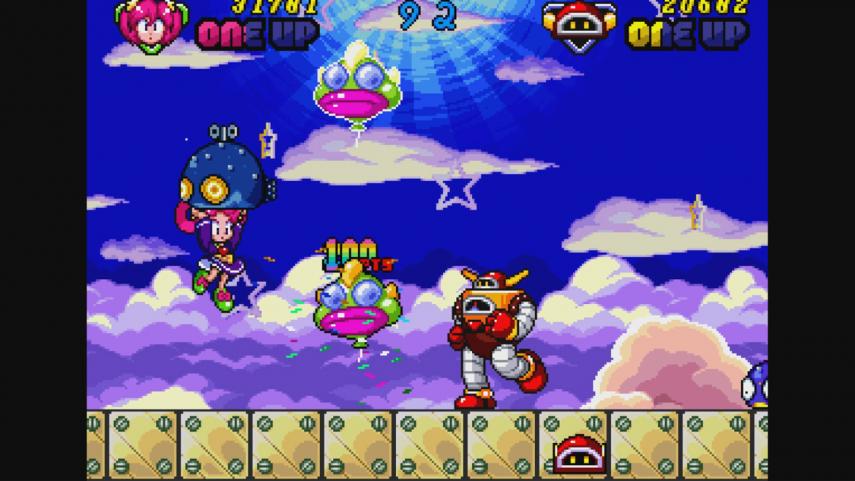 Also, before starting the game, we can choose to play in perfect proportion, 4:3 or 16:9, in addition to activating all kinds of scanlines or an image distortion effect that simulates the curvature of old tube monitors. The result is more convincing (and much more customizable) than in other similar games. For dessert, we have various conceptual artwork and a sound test that allows us to listen to both the original melodies and new remixes created for the occasion.

All in all, Clockwork Aquario is relatively inconsequential as a game itself and has a few design and gameplay flaws. Still, it’s a fun challenge for those who want something straightforward to enjoy together (needless to say, it lends itself to being played with kids, even little that they already have some gaming ability). And, above all, it is the living testimony that you should never give up on a project, no matter how many years pass, if you find people with the same love for retro as you do, who are willing to lend a pixelated hand.

Atomic Heart already has a release date and celebrates it with a new trailer
November 2, 2022
Average User Rating
0
0 votes
Rate
Submit
Your Rating
0