An adventure in an interesting cyberpunk world that tells the story of the recreation of a city on the verge of falling apart.

Cloudpunk is a narrative adventure developed by ION LANDS. The second title from the creators of Phoning Home takes us to a futuristic city on the clouds and telling us the story of a city that is on the verge of falling down due to possible consequences of our way of life, criticizing the economic, moral and social systems of today’s world. It does this with a game mechanic based on two pillars that intertwine: the conversations with the inhabitants of Nivalis and the distribution of packages. while exploring the city in the HOVA flying vehicle or on foot. But it is a game capable of piquing your interest and catching your attention with its beautiful proposal.

The story will definitely please any cyberpunk fan. As mentioned before we play as Rania, a woman who arrives in Novalis without a single credit in her pocket, after leaving her homeland for debt, and with a pinch of naivety and another of fear about what she will find in the megapolis, she works at Cloudpunk, a messaging service that operates on the margins of legality: it is better not to know what is in the package. 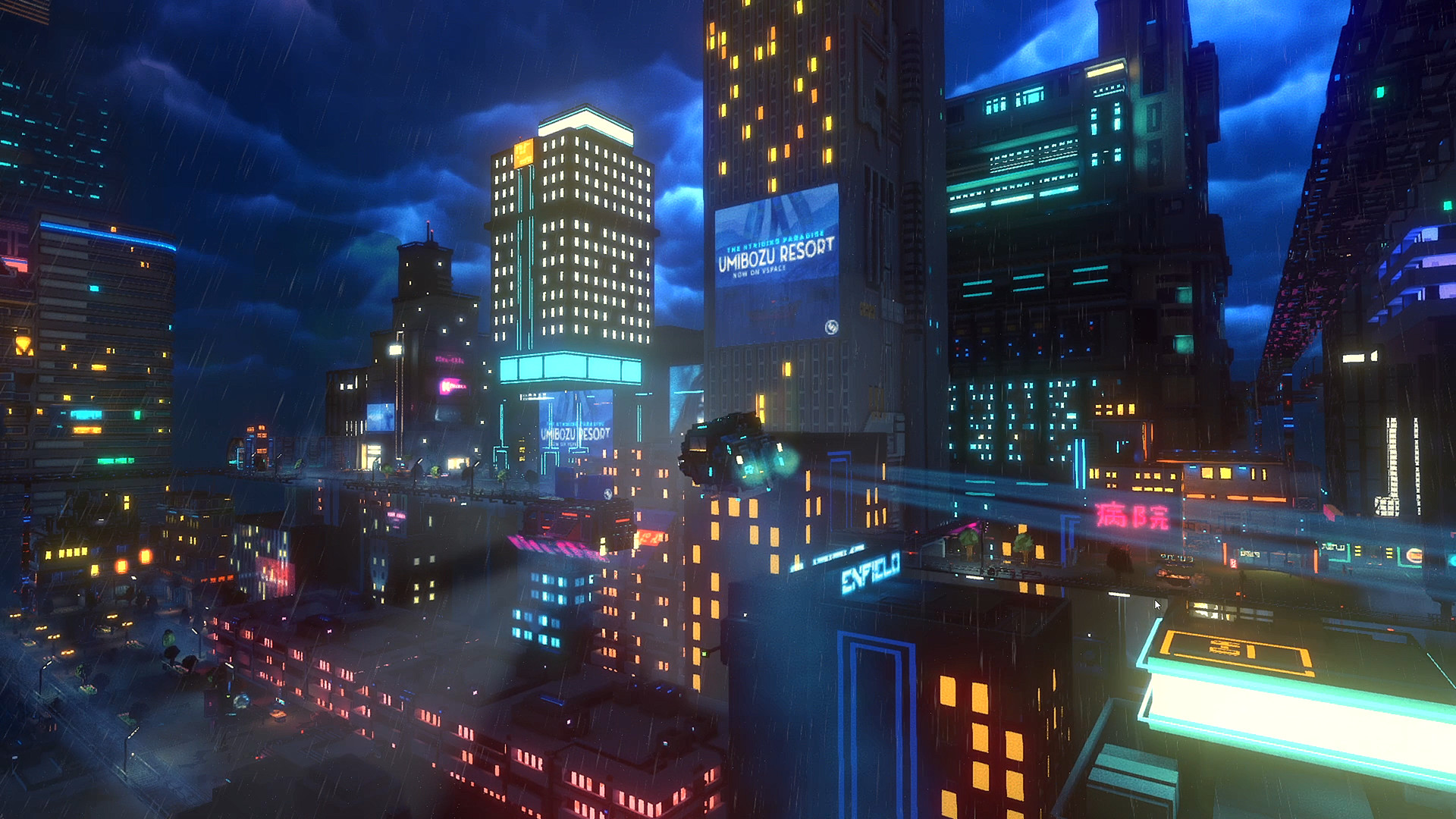 Rania is a perhaps not very credible character, whose role in the game is not so much to be the protagonist as to be a sort of a character who judges the people and the world around, which are, in fact, the interesting thing about the narrative of the game. Little by little, we are unravelling what is happening in a city in which entire neighbourhoods are crumbling before our eyes; a city in which, as the topic marks, the rich live above the poor, and under these, the poorest still: there is no middle class.

Despite the predictability of this social and economic fabric, there are many characters who catch our attention. That artificial intelligence that we take to the Summit to work as a vacuum cleaner, but that feels superior simply because it is going to live on the mob; the marriage formed by a posh with aporophobia and an android who until a few years ago had no rights; the poor android who feels human and has no money to pay for the necessary medications so that his synthetic dermis does not fall out; or the man who was expelled from his religious group after receiving a blood donation as normal as prohibited by his sect. 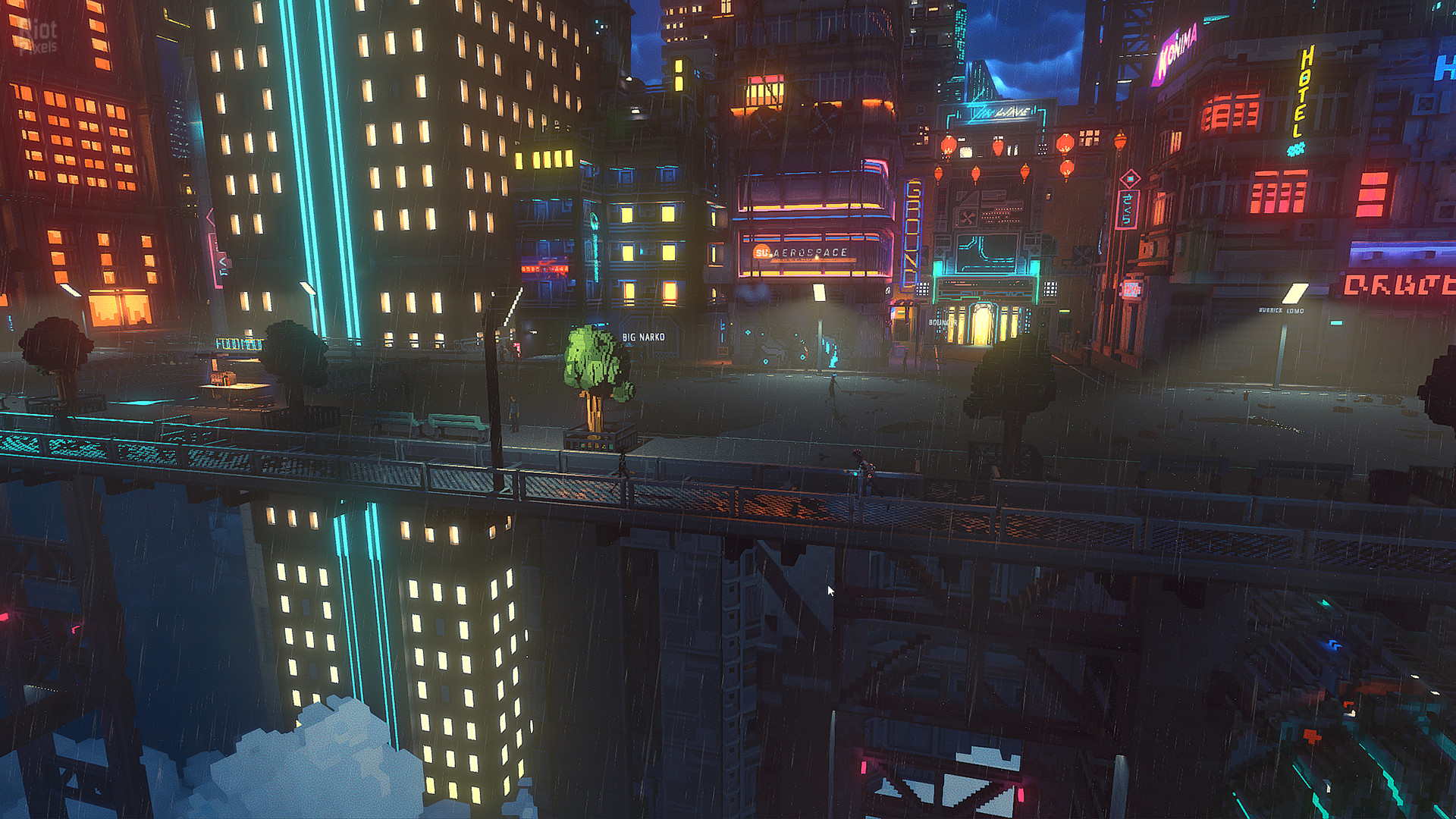 What is interesting, beyond the predictable main plot, are the stories of the people we meet in Novalis, and how through them parallels are drawn with the problems that pretty much happening in our own reality as the great futuristic city, such as xenophobia to social inequality, through transphobia or lack of privacy in the face of technology corporations. We attend situations that frustrate us because we know they are not fiction, but also moments that bring us a smile to ease the dramatic weight: the conversations between Rania and the Cloudpunk base Control employee are getting closer and closer; and Camus, the android dog stored in the HOVA processor because we can’t afford him a body, he’s so naive as friendly, faithful and loving.

Cloudpunk bets all his cards on two elements, world-building, and the visual representation of that world. Novalis is not recreated in a photorealistic as compared to the blockbuster Cyberpunk 2077, but using voxels: the square-based textures popularized by Minecraft and adapted, in different ways, by numerous games. The first orders that we fulfilled in the city left us speechless. The city rises above the clouds at an infinite height that prevents us from seeing the ground. Skyscrapers would touch the sun if it were not constantly covered by a black layer of pollution. It always rains, there is no day. As is a tradition since the first visual representations of cyberpunk, only the neon lights of shops, bars, offices and discos illuminate the place. And the vehicles. 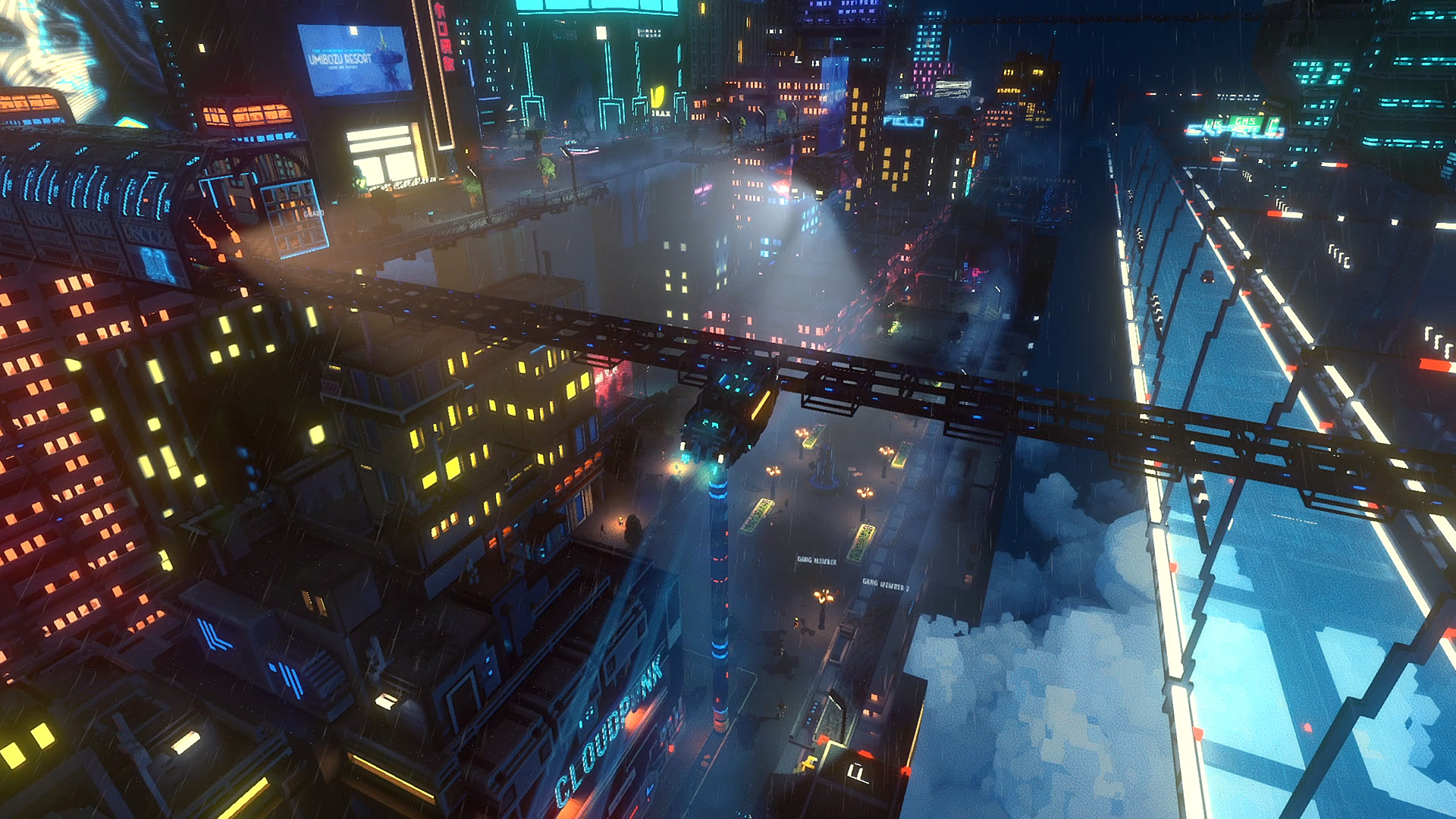 To go from point A to point B, the system that replicates each and every one of the missions (after all, we are a delivery person), we first move with our HOVA through holographic roads full of vehicles: it is not complicated, you just have to pay attention to junctions and curves; and we can even get off the road, at the cost of losing speed, and navigate at our own pace. Then we will have to park in the designated areas and walk to our destination, clearly marked on the minimap, exploring huge squares, walkways that connect blocks and narrow alleys. In the walking sections the camera, based on fixed angles, rotates to constantly offer us spectacular views: the game ensures that we do not miss any marked objects and collectibles on the map that we should collect.

The problem is that this fool-proof structure causes the game to be very repetitive after the first few hours. The city, although impressive at first, soon ceases to capture our attention because there is practically no change from one neighbourhood to another; and its limitations are made clear in the first minutes: we cannot enter buildings or explore where we please, only in places where there are parking spaces for our HOVA. The reason to explore comes down to getting those items marked on the minimap and talk with one of the characters whose name appears above your head: all the others are nothing more than a silent mass. It is almost contradictory that a cyberpunk city, always represented as gruesome places, but full of life, here feels so empty. 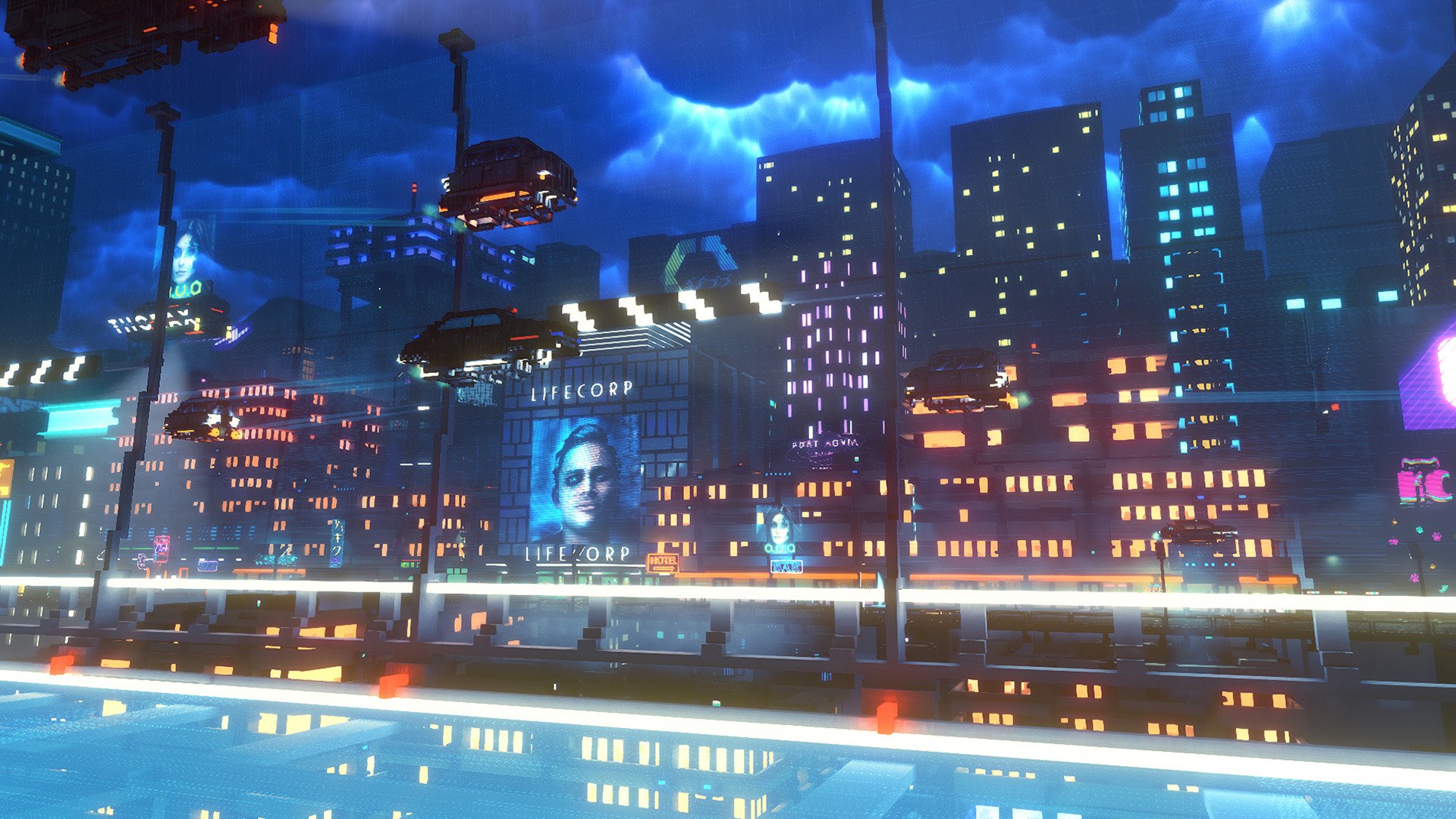 It is almost a breath of fresh air that the game focused on the narrative and not on physical violence, but both the environment, turned into a simple metallic and colourful frame; as the design of missions, always based on going from point A to B (with some modifications such as being tied to a timer or making decisions based on delivering the package in one place or another), they make the approximately 10 hours that lasts Cloudpunk.

The developers tried to save the situation by introducing a series of spurious systems that help little. There is an economy based on clone merchants that we find on the streets and that offers us different products which we can sell to others at a higher or lower price, as is the case with the items we collect. The HOVA, Rania’s apartment and herself can be customized visually with the money raised. The vehicle has to be recharged from time to time at the gas stations and taken for repair after colliding with buildings and other HOVAs several times, but in our game, there has not been a situation of being unusable. There are even some secondary missions, again, on the transport of goods or people. There is a soundtrack in the background, failed to capture our attention. As for the narration, the voice of an android, for example, is so forced and unnatural that it does not sound professional. 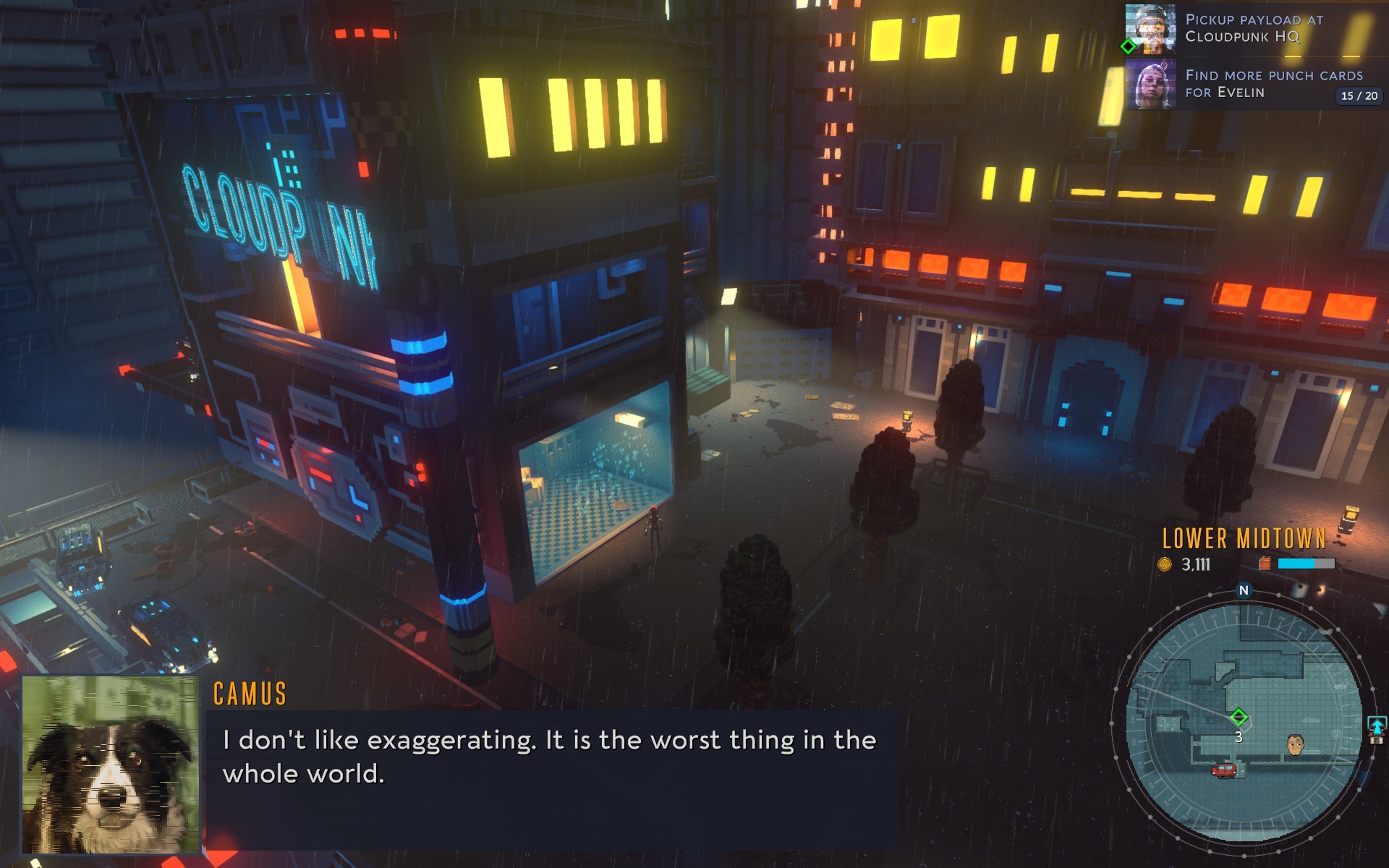 Cloudpunk does not propose anything that other video games, movies, television series or anime have not done before. That does not mean it’s a bad game, we enjoy the world they created, and become fond of some characters and, above all, Camus, that disembodied dog. But unfortunately, the proposal is focused entirely on the visual and the narrative, for a game that lasts around ten hours.

We prepared this review with a digital review key for the PS4 version provided by Evolve PR.