Ubisoft's open-world series Far Cry returns with a good action game, that recycles much of what Far Cry 5 proposed.

Assassin’s Creed has always been set as an example of a series overexploited by Ubisoft, but Far Cry is not far behind, and since the great Far Cry 3 marked a milestone back in 2012, we have had five new deliveries, three of them spin-off. The formula works like a clock and is still very fun, delighting the gamers, but it has not evolved enough to hold so many games on its back, and it is clear that it has clear signs of exhaustion.

It has been precisely in its spin-offs where we have seen more changes and freshness, as the hilarious and much celebrated Far Cry 3: Blood Dragon (2013) or the curious Far Cry Primal (2016). And maybe that’s why we expected something like this with Far Cry: New Dawn, a game that, not being a numbered delivery and having a new post-apocalyptic setting, could have proposed new and a little more risky things.


But that’s not the case, New Dawn is rather a direct continuation from Far Cry 5 that hardly introduces relevant changes in its gameplay and its structure; It is a more of the same and not necessarily better, and even waste its atmosphere in a surprising way, both playable and narratively.

Even so, it is still a very entertaining action adventure game and it plays really well and has the usual production values just like any other Ubisoft titles, which are always quite high, but you can see that it has been a short and unambitious development, and that recycles a lot of stuff we’ve seen in Far Cry 5, developer didn’t even bother to disguise it. 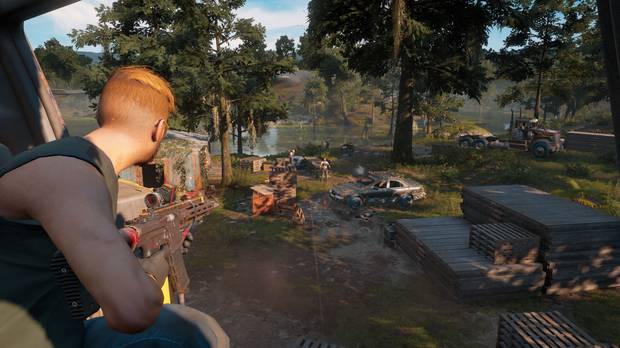 The same types of enemies, animals, companions, vehicles and weapons are practically repeated, including the development and structure of many missions , and you ask yourself more than once why they have taken the story to a post-apocalyptic world if they have not taken advantage of it to offer new and original weapons or vehicles, to tell us something minimally interesting, in one of the vaguest stories of the series, or even small touches of survival could have been added. Not even the new villains comply, whose design is very cool, but as characters are mere cartoons, and have not bothered to build a bit.

All this may sound harsh, but if you have enjoyed previous Far Cry obviously you will have a great time with this, the formula, it still works, and will depend on how recently you played Far Cry 5 or how tired you are from the series as you may enjoy it to a greater or lesser extent. 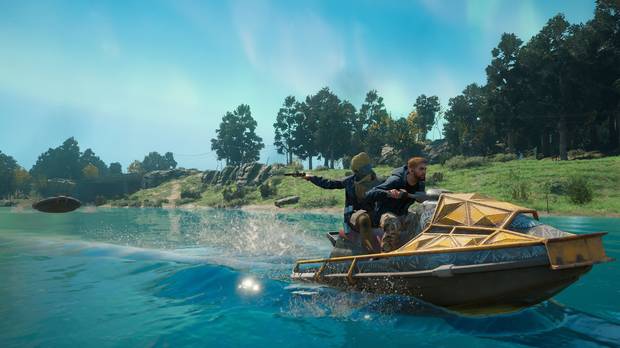 Far Cry: New Dawn is a direct continuation of Far Cry 5, and we return to the same scenario, the beautiful and dangerous Hope County in Montana, 17 years after a nuclear apocalypse, controlling a new character. Things have obviously changed a bit, and the survivors are rebuilding civilization while they have to fight a new threat, the Sailors, a “nihilist plunderers” led by a pair of psychopathic twins, Mickey and Lou, possibly the worst villains in the series. 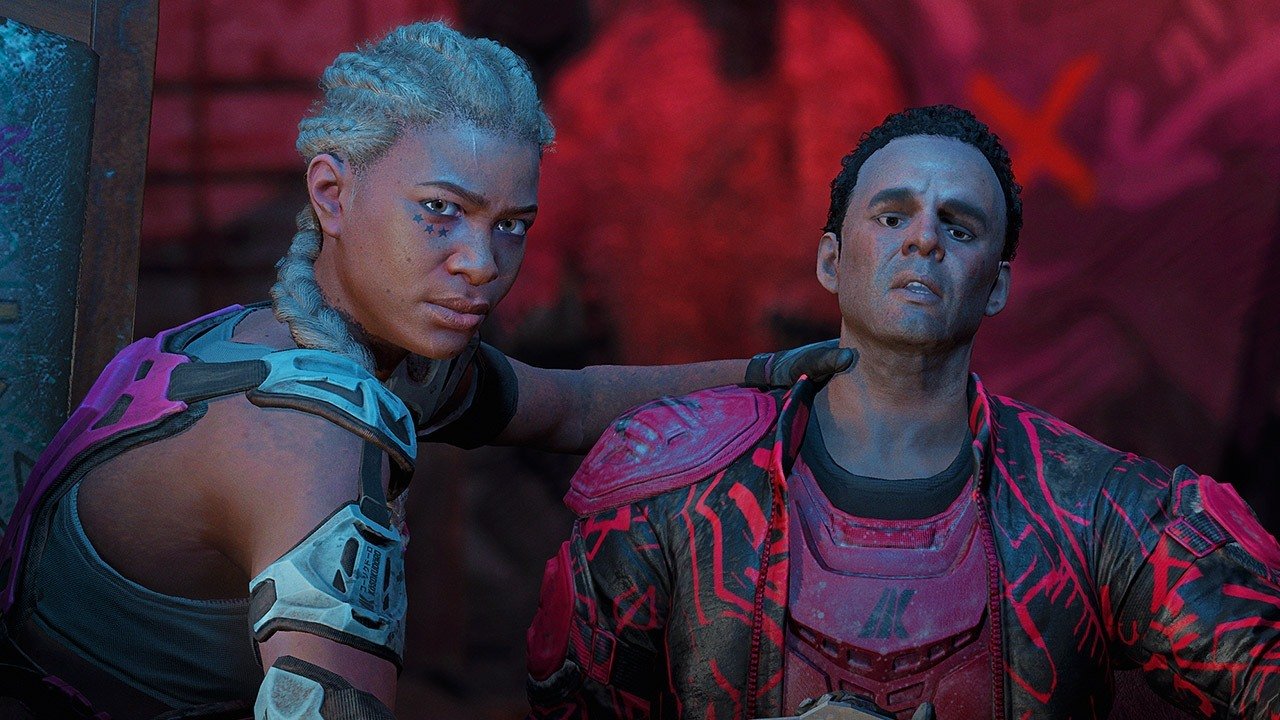 We will meet old acquaintances, full of references to the past events and what has happened in these 17 years, and of course we will move back to the same scenarios, although with aesthetic changes, now with a lush and colourful nature that has taken over everything, and with the old structures and buildings that we knew partially destroyed.

Honestly, they have recycled the map of the previous Far Cry is one of the minor problems of the game, and much of the time you do not seem to be in the same scenario, only when you reach certain iconic locations. In fact, it is not exactly the same map, it is a reduced version, and although this may sound negative to us we liked it; is a Far Cry more “collected”, and thank you, do not feel so overwhelmed by its size and the amount of content, and your story can be completed in about 12 to 15 hours . 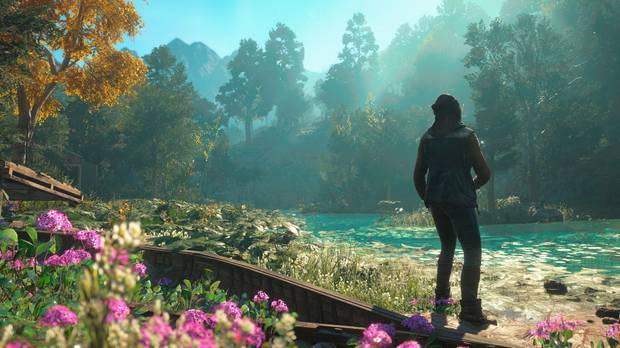 The first hours of the adventure are very enjoyable : it looks and plays great, the formula is as entertaining and solid as ever, whether, with direct action or stealth, there are some novelties in its design and structure that bring some variety, and its plot context is curious, to see humanity reborn from its ashes, with all the problems that this entails.

But after those first and satisfying hours, you begin to get “the memories of Vietnam”, the amount of time that you dedicated less than a year ago to Far Cry 5 , and you discover that you are doing exactly the same thing again, and the ennui is gradually taking over the experience, which has not known or has not wanted to incorporate real weight, as happened in previous spin-offs . 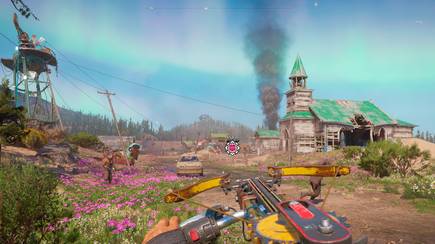 As we said at the beginning, the post-apocalyptic setting has not been taken advantage of enough, in any sense, for example, to surprise with new types of enemies or weapons, and there is hardly a new one, the spear-throwers -very funny-, and modifications of which already we knew And it does not emphasize the design of missions, that although they try to be varied sometimes they get to repeat the structure of some of the previous delivery, of almost identical way. Nor will it surprise anyone that the story is loose, even below the expectation, with a plot context that could have given much more of itself.

There are small changes in its structure and design that we liked, as a certain RPG component, but without reaching the levels of the latest Assassin’s Creed. Now both missions and enemies and weapons have a level of strength or difficulty, from 1 to 3, and a fourth called ‘elite’, and this tells us what dangers we can face, in addition to seeing the damage we cause represented in numbers At the beginning of the game and with level 1 weapons, we will not have anything to do with level 3 enemies, so it is better to upgrade the arsenal before facing certain challenges.

For them, we will have to obtain abundant resources exploring the scenarios and completing missions to build new weapons, while we complete challenges and get talent points to improve the character, in the same way as Far Cry 5. The most valuable resource without a doubt is ethanol, with which we improved and expanded our base of operations: Prosperity. 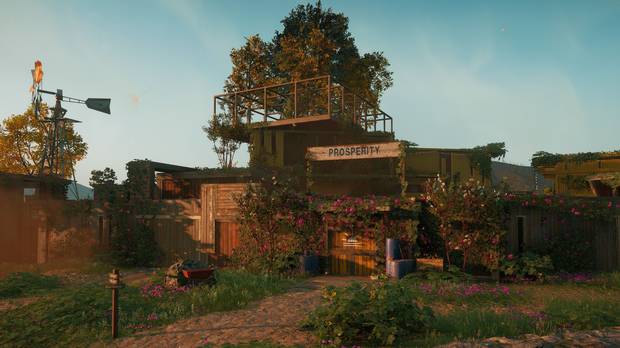 Here all our allies work and are protected, and if we improve their facilities we will unlock different advantages: more health, being able to build new weapons, explosives or vehicles, that the comrades in arms are stronger, or earning the right to be able to make different quick trips in the map.

Whenever in a game there is a castle or a base of operations that we can improve it is gratifying to see how the facilities are growing little by little, while we are talking with its inhabitants, but even that does not do too well. Far Cry New Dawn, and despite looking like one of its central elements is developed with the law of minimum effort. In addition, they use it as a barrier in the campaign a couple of times, forcing us to improve Prosperity to advance the story.

We need abundant ethanol, and although it can be achieved in various ways, such as stealing trucks or deliveries of goods, the best way is to conquer enemy positions, you know the characteristic camps of the series that can be infiltrated and captured by stealth or direct action, or almost always a mixture of both.

We have the usual main missions of the story -although not many-, the missions in which we recruit comrades who can fight by our side one at a time, and side missions are the more curious and original to include platformer and even puzzles, and different types of collectibles, such as musical themes for the car or a series of photographs. 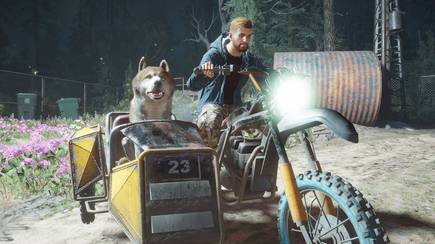 Again we can play the whole adventure in online cooperative together with a friend, something very entertaining, and especially including a new type of content, called Expeditions. These are special missions that take us to locations outside of Hope County, and where we arrive by helicopter, we steal merchandise, we have to flee, obtaining juicy rewards.

A gigantic aircraft carrier, the prison of Alcatraz, an abandoned amusement park or the Air Force One crashed in the middle of forest are some of the attractive places that we visited, in a mission that according to overcome we can go increased of difficulty. They do not pose anything differently playable, but visiting other scenarios, quite beautiful at times, gives a little touch of freshness.

Because the truth is that Far Cry: New Dawn looks absolutely great, we would even say that a little better than Far Cry 5, at least in the Ps4 Pro version, thanks to improved lighting, which offers really beautiful moments. With a framerate at 30fps very stable in all consoles, including the launch models of PS4 and Xbox One, it is noted that Ubisoft has already optimized its Dunia engine to the current generation. Of course, in details such as animations and physical seams are much seen and needs a renewal, we imagine that already facing the next generation. 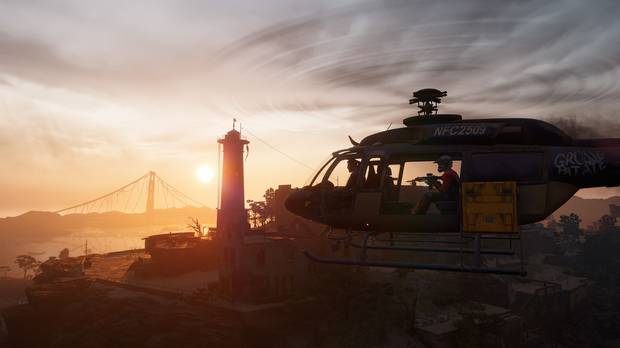 The sound section is quite good, as in all Ubisoft games,  and the soundtrack has some ups and downs. On one hand, they include the licensed music can be listened while driving or on some missions, which include classic songs, and on the other the soundtrack composed for the occasion by Tyler Bates ( Deadpool 2, John Wick ) and John Swihart ( Napoleon Dynamite ), more experimental than usual. 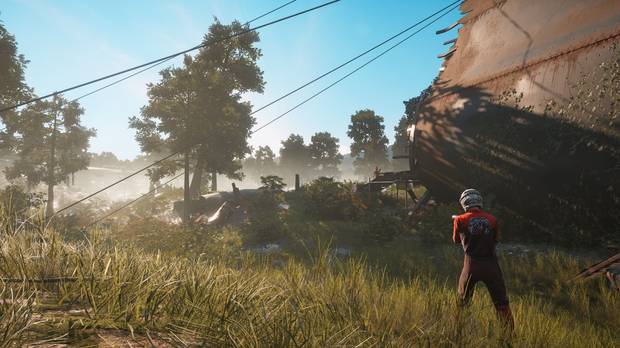 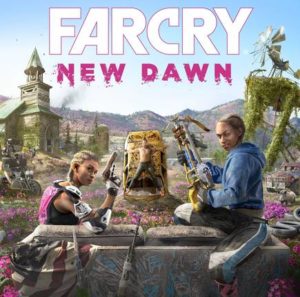 Is Far Cry: New Dawn a good game? Yes. Is it totally dispensable? As well. Although it has some interesting new features in its structure, we have too close in time to the huge Far Cry 5 so that this new release does not feel like more of the same, and also one of its great strengths, it’s post-apocalyptic setting, has finally been unused , because some jokes or references to great classics like Mad Max or winks nostalgic to the previous delivery are not enough. If you are a fan of the series you will not have too many problems to enjoy it. Again it ‘s a good action adventure game, but you have to ask much more from Ubisoft and Far Cry than a game made of recycled elements and without too much passion and dedication, just a year later.

We have prepared this review on a PS4 Pro with a digital review copy provided by Ubisoft.

The producer of the Project Zero series is open to make a new game on Switch
October 20, 2019
Average User Rating
0
0 votes
Rate
Submit
Your Rating
0