An indie cyberpunk action-adventure game where being stealthy could save your life.

Speaking of Cyberpunk Cyberpunk 2077 and Deus Ex are probably the first couple of games that come to mind, there are some independent developers who built titles full of environments, aesthetics and social criticism surrounding the cyberpunk genre. Foreclosed is developed by the Italia based Antab Studio and Foreclosed has all those elements that cyberpunk game proposes, a subgenre of science fiction: conspiracies, experimental augmentations, megacorporations and a world capable of offering its best face – the neon lights and elegant streets – with the most dangerous neighbourhoods in the city.

The highlight of Foreclosed are all those references to cyberpunk topics and the cartoonish graphics, not only during story sequences but also in the gameplay. His argument will introduce us to Evan Kapnos, apparently an ordinary citizen who, as soon as he begins, will be involved in a plot about identity and technology in the future that could be near. In short, Evan will discover that his implants have a kind of experimental firmware that makes him a target, but at the same time, they offer abilities that the rest of the population does not have.

The protagonist will soon see that some agents are being pursued but have an ally to solve his questions. With their help, you can uncover secrets, unleash the full potential of implants, and equip yourself with a symbiotic weapon that receives modifications, so while it is a single gun, the features are flexible. The story has its clichés here and there, but it does what we might expect from an action game.

Foreclosed is a fairly traditional third-person shooter, although it adds certain hacking mechanics too, such as attacking nearby enemies’ implants. Foreclosed gameplay feels reminiscent of a simplified version of Deus Ex, but it doesn’t feel like a triple-A game. And this is the main weak point of this game: the playable aspects do not measure up, and even some of its strengths are blurred in a title that inevitably becomes an inaccurate shooter with anecdotal stealth. 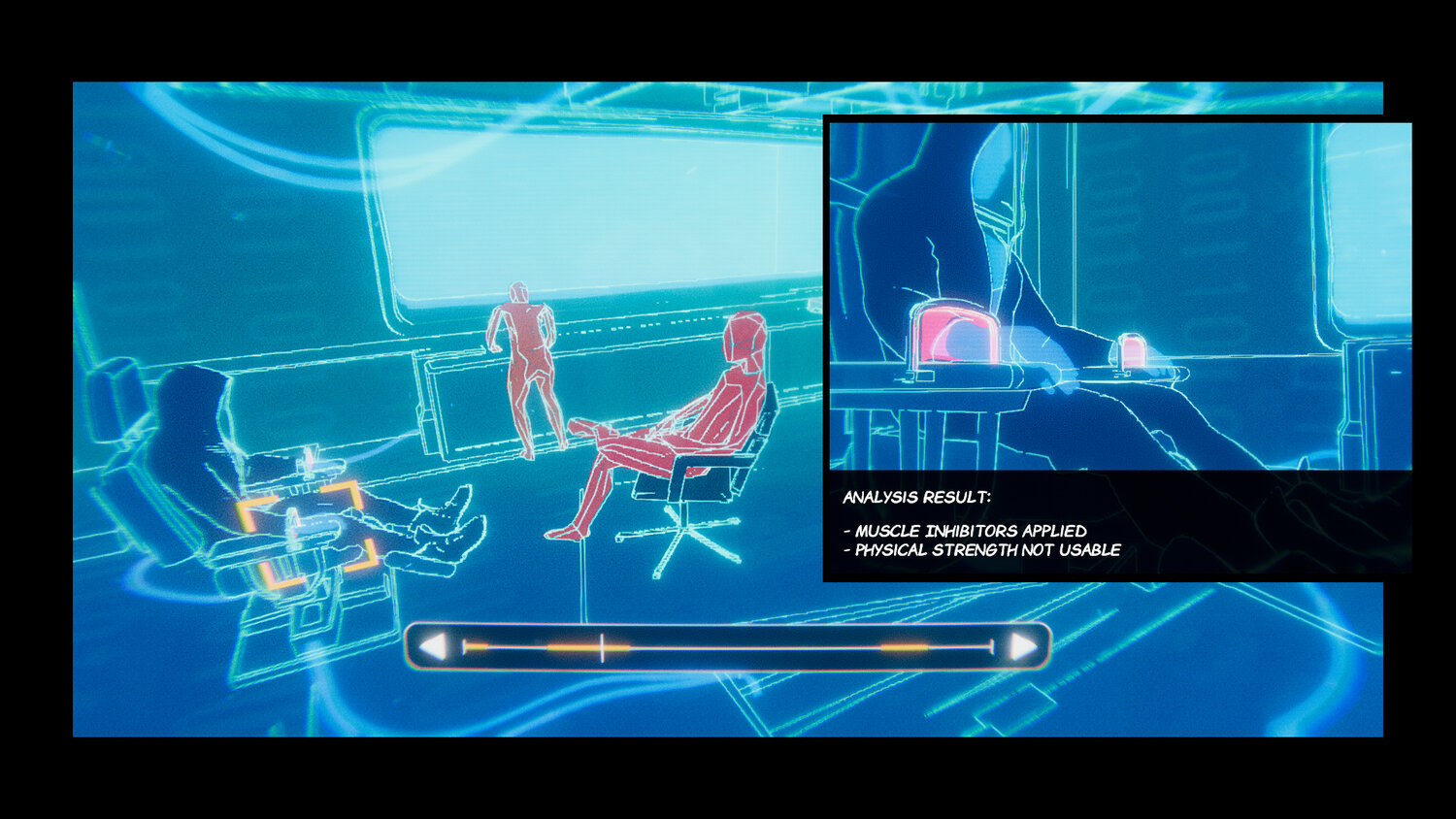 Making a good shooter action game is not easy: there is a lot of competition, and most have enjoyed dozens of proposals of all kinds, better or worse, but it is a very filmed genre. Shooting in Foreclosed is not as comfortable as we would like, and although it can adjust the speed of the control, it does not convey the fun of other third-person shooters. It is not a cover game, or at least it does not have the animation to “stick” to parapets and columns, but at the end, we will do more awkwardly with the option to crouch. 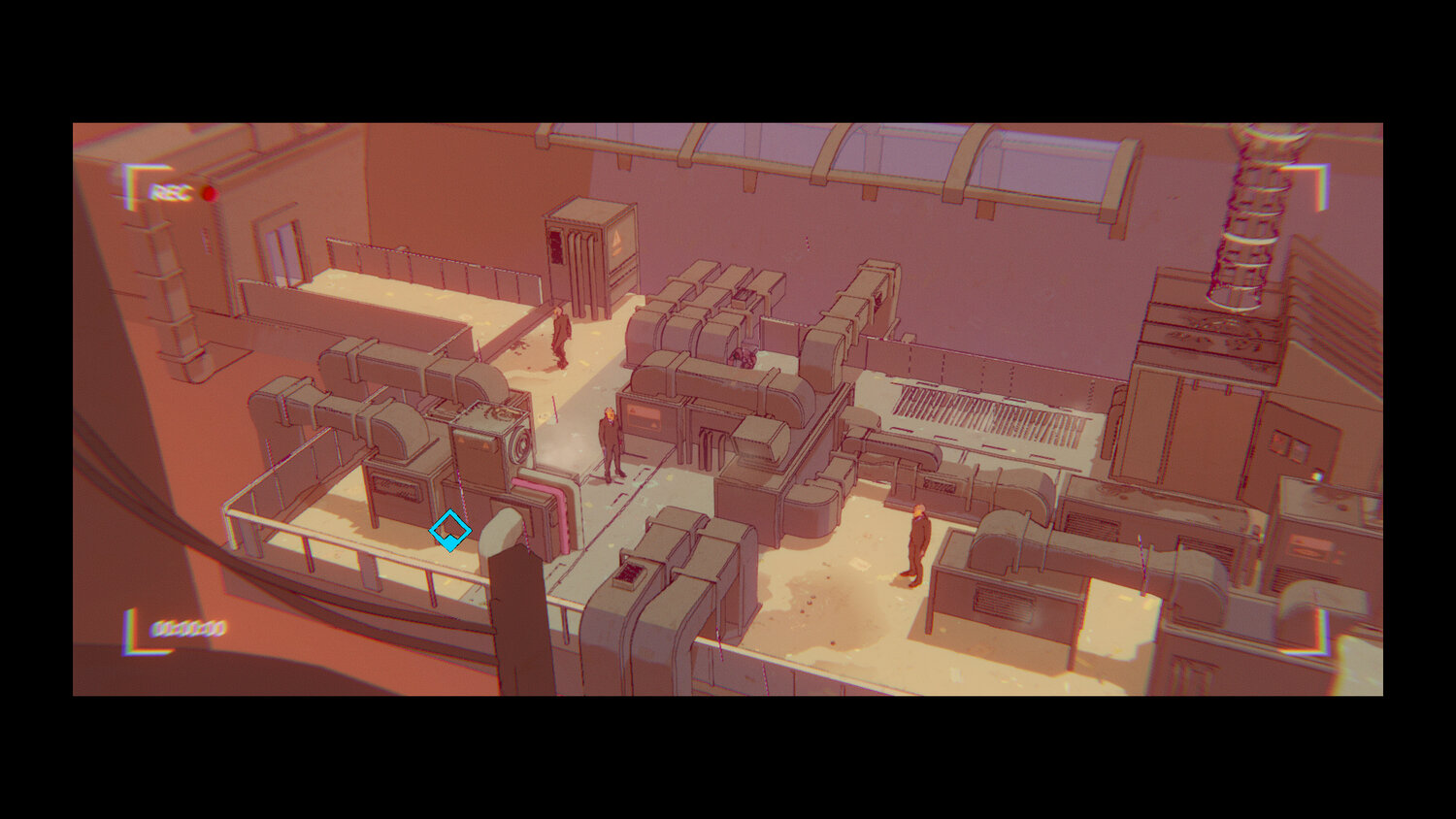 The combat has other drawbacks, such as the AI can be unresponsive. We can repeat a section, and we notice that the continuation points are sometimes too far apart, on countless occasions to verify that the soldiers almost always act in the same way: they will go to the designated point and will be shooting still, even in places that are not very logical like the center of a room with bare chest. Of course, the enemies can afford them: they are authentic bullet sponges – at least the ammunition of our weapon is infinite – and unless you hit the head, which then they do fall quickly, their body seems armoured. The difficulty is very unbalanced in its normal mode, so exposing yourself for a few seconds to three or four agents will leave your health shivering – recovery is automatic over time. Don’t be misunderstood: It is frustrating. It is not a difficult problem because the easy option will make the game easier, but it is not better. 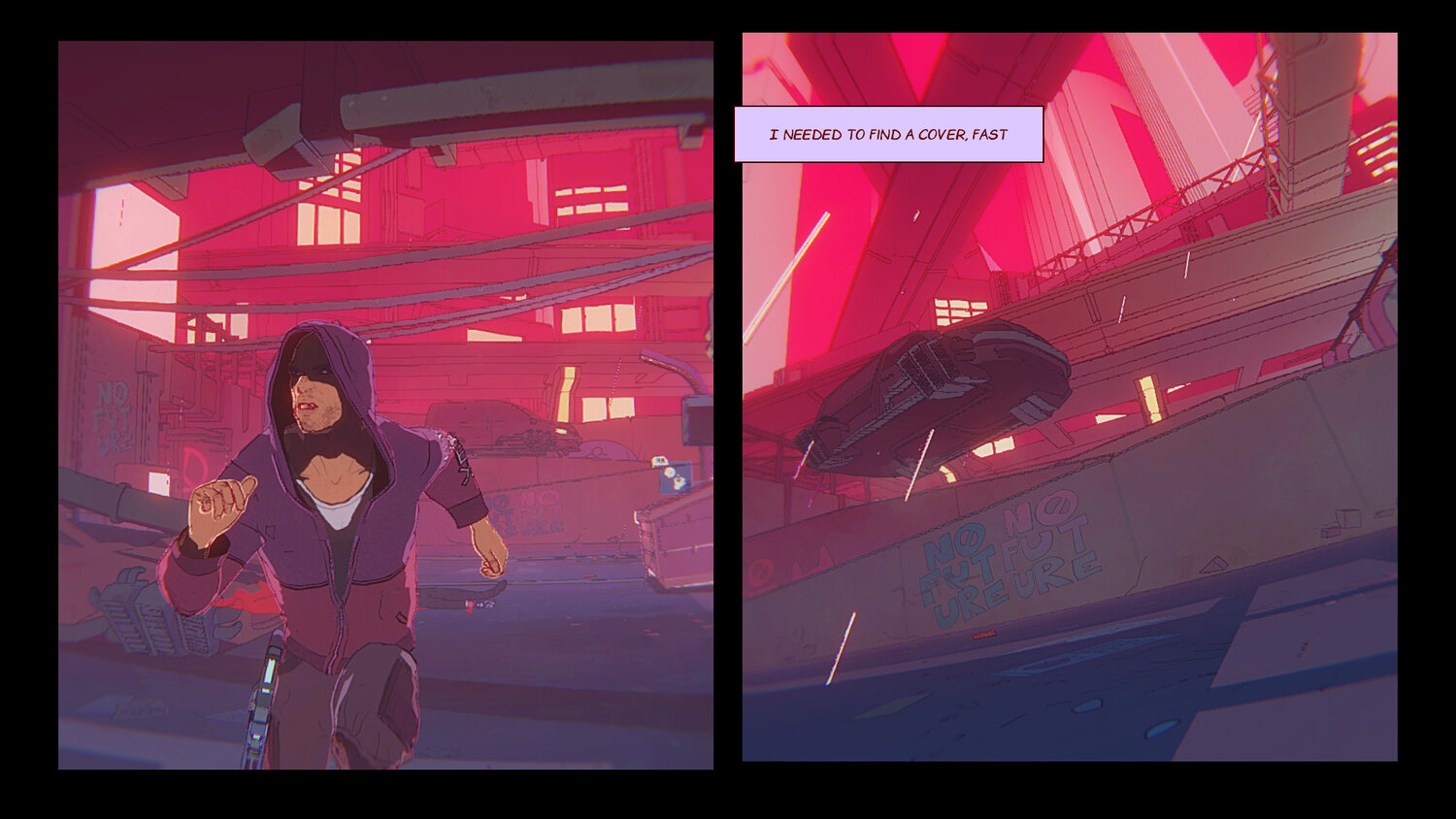 Nor does it help that stealth is very seldom effective except for the sections expressly designed for it; that is, unlike those other cyberpunk classics that provide an alternative to play with stealth or action, here the scenarios are designed to be played in a single way, which usually involves shooting waves of enemies. As we progress, agents with shields and protections will appear that requires learning a specific skill, but Foreclosed is a straightforward version of what we have seen in the references of the genre and on countless occasions. 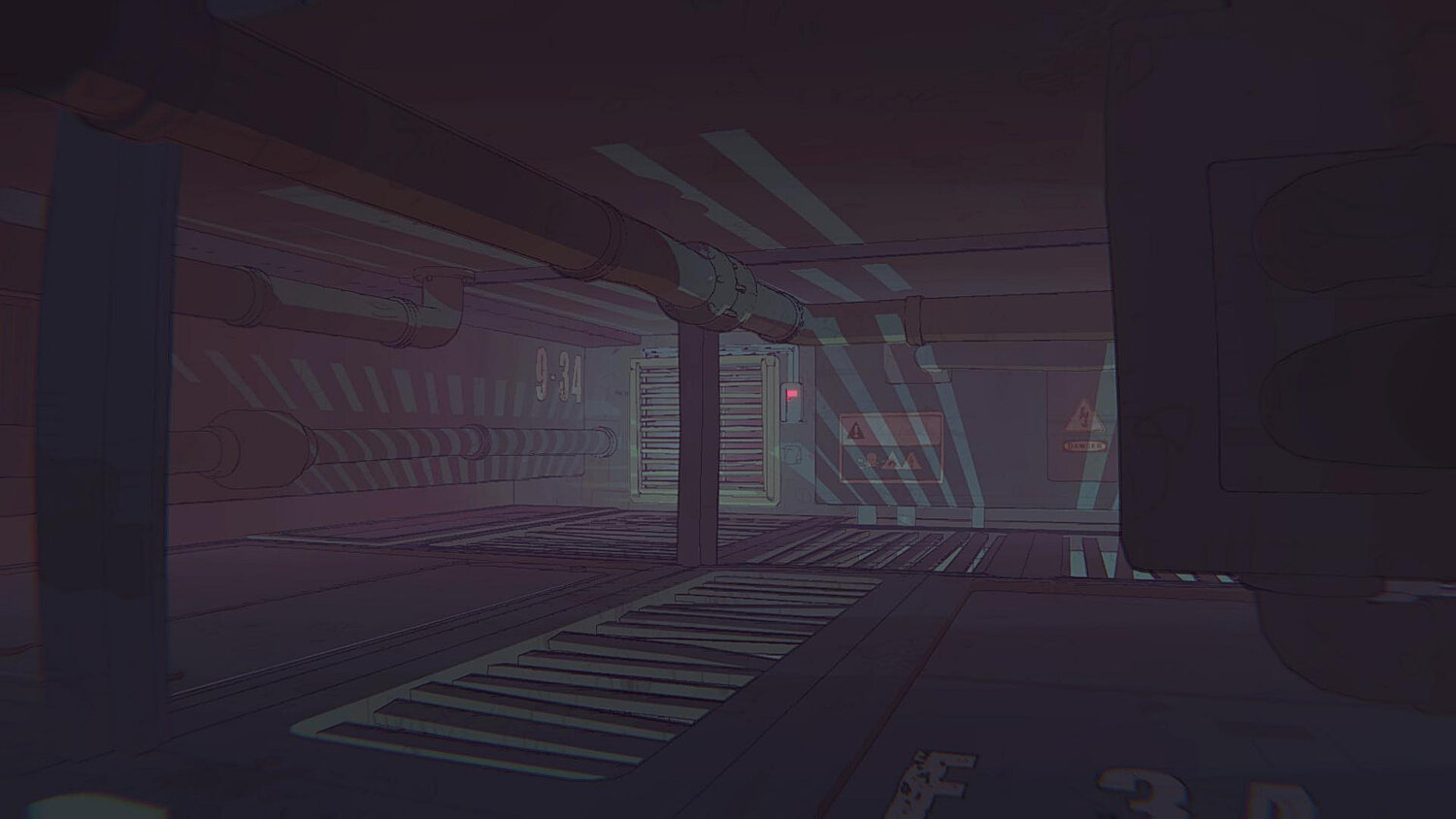 The increases or modifications, both of the character and of his weapon, help to make up the gameplay a bit so that from time to time you have a special shot, such as curved bullets or telekinesis abilities – think Control, but more basic and restricted to the points where there is a box or fire extinguisher-; Although you were far from entertaining, at least it helps that not all combat is resolved with bullets. To get an improvement point, you need to gain experience obtained with normal shots or, for example, by locating a series of hidden artifacts on the scene – a radar signal will indicate proximity. The only incentive to explore each room is not a design show either: forget about alternative routes to plan your route; they are combat arenas with several boxes and columns to protect yourself. 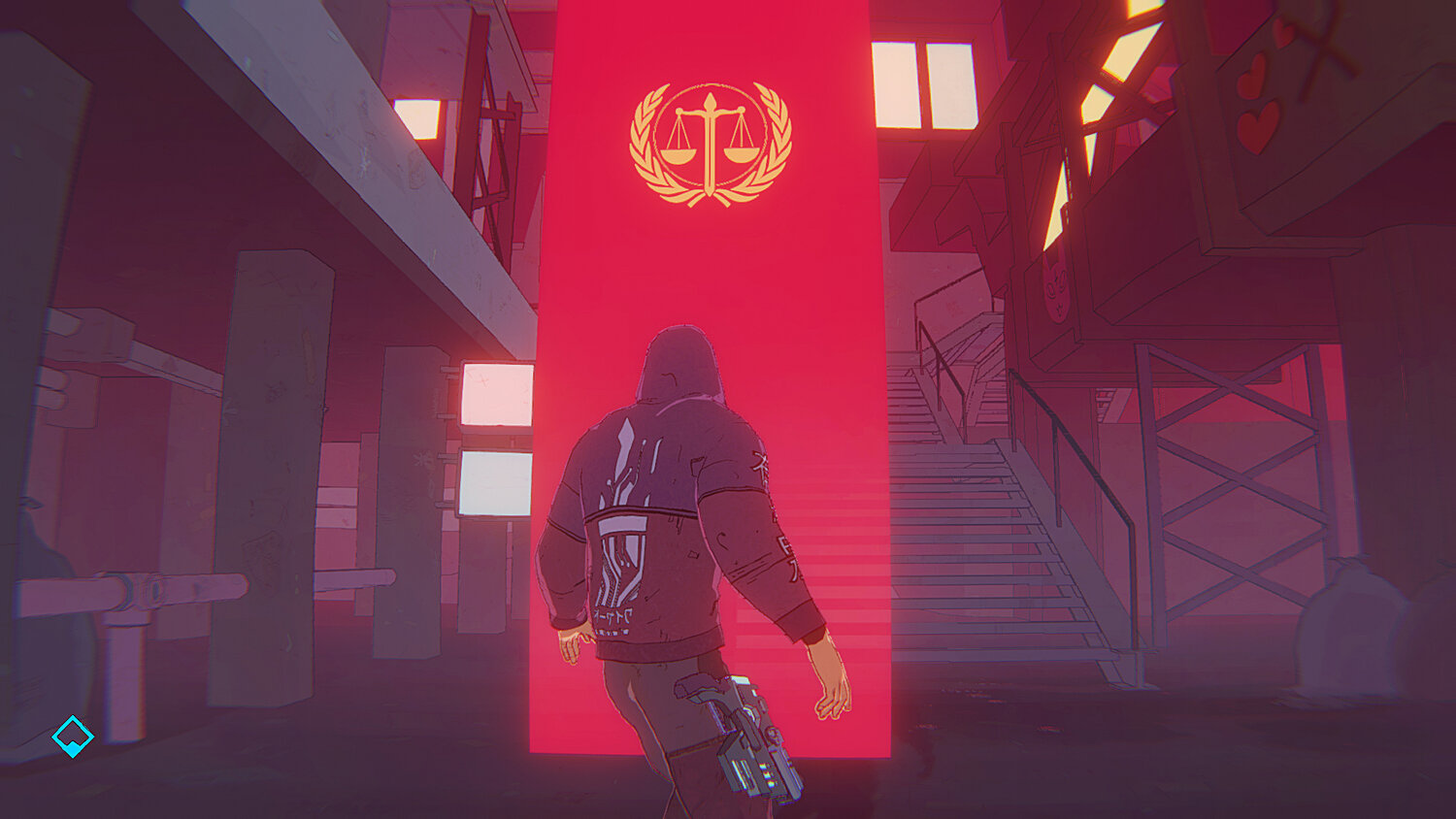 Foreclosed means well and draws inspiration from classics but fails to put into practice. The armed turret or panel hacking minigame consists of pressing a series of directions in a fairly generous amount of time. What happens if you fail? Nothing, you can try again. There are also other tests such as connecting cables, moving containers with a crane, or looking for hidden objects in the walls to power devices. Foreclosed works best when it gives a breathing space to pose puzzles, although they are not challenging or a display of originality, which does not speak highly of action or stealth.

Cyberpunk is usually associated with stories in nightscapes, probably due to the great influence of Blade Runner, which chooses Foreclosed for a very clean cel-shading quite atypical. But it looks good, and although not all locations are equally well cared for – there are many areas poor in detail – when you notice the work, you get a world with personality: this is not Cyberpunk 2077, Ghostrunner or Cloudpunk. The shots show their onomatopoeia, the dialogues appear in the form of a speech bubble, and the game constantly frames the action in vignettes. The few animations or the less inspired sections prevent it from shining more, but it is certainly one of the most positive sections. 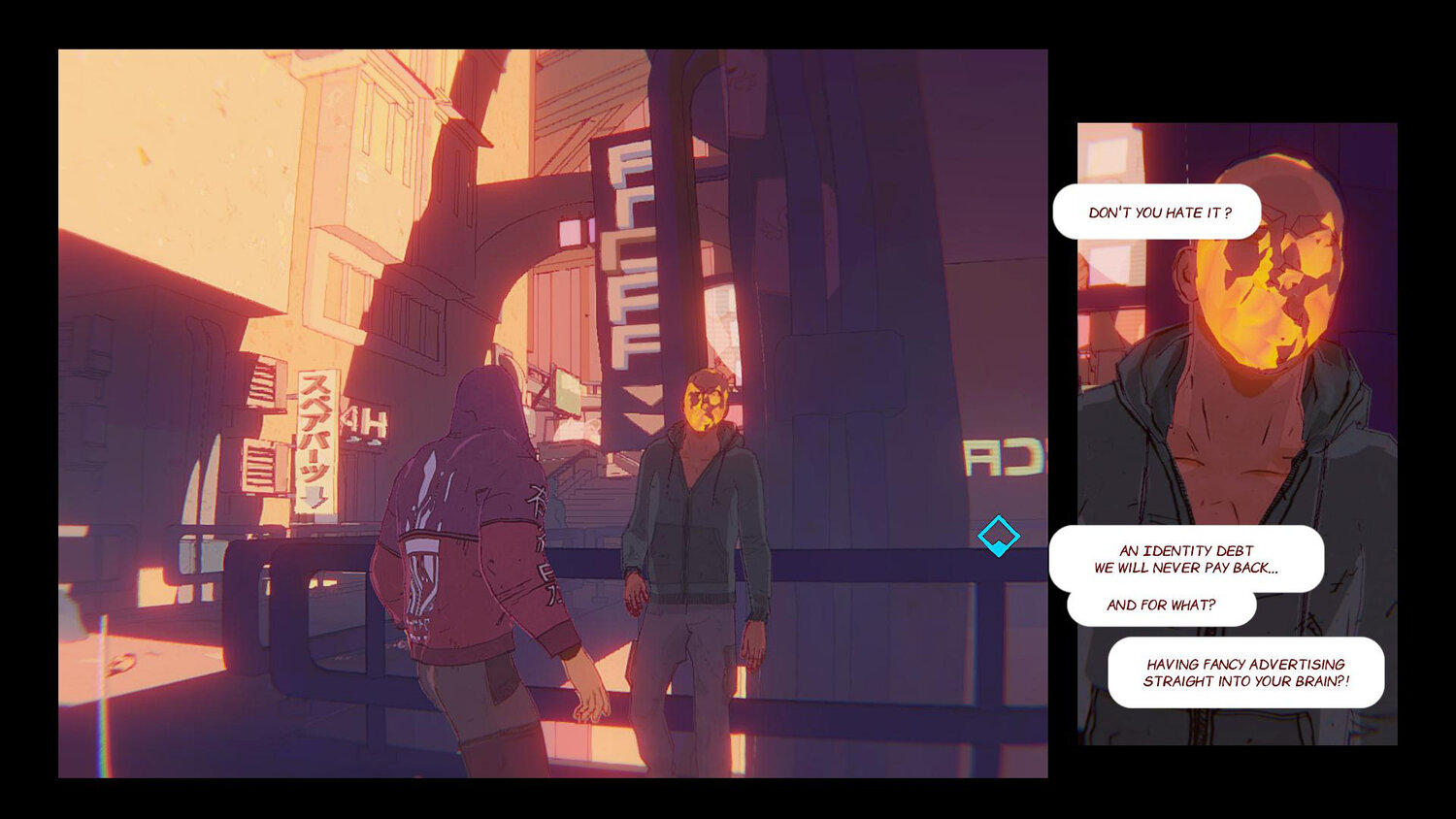 The music can be repetitive due to the lack of variety, but at least it sets the action. Lastly, the PS5 version takes advantage of the DualSense to give a different feel to the adaptive triggers, in addition to using the controller speaker for calls. 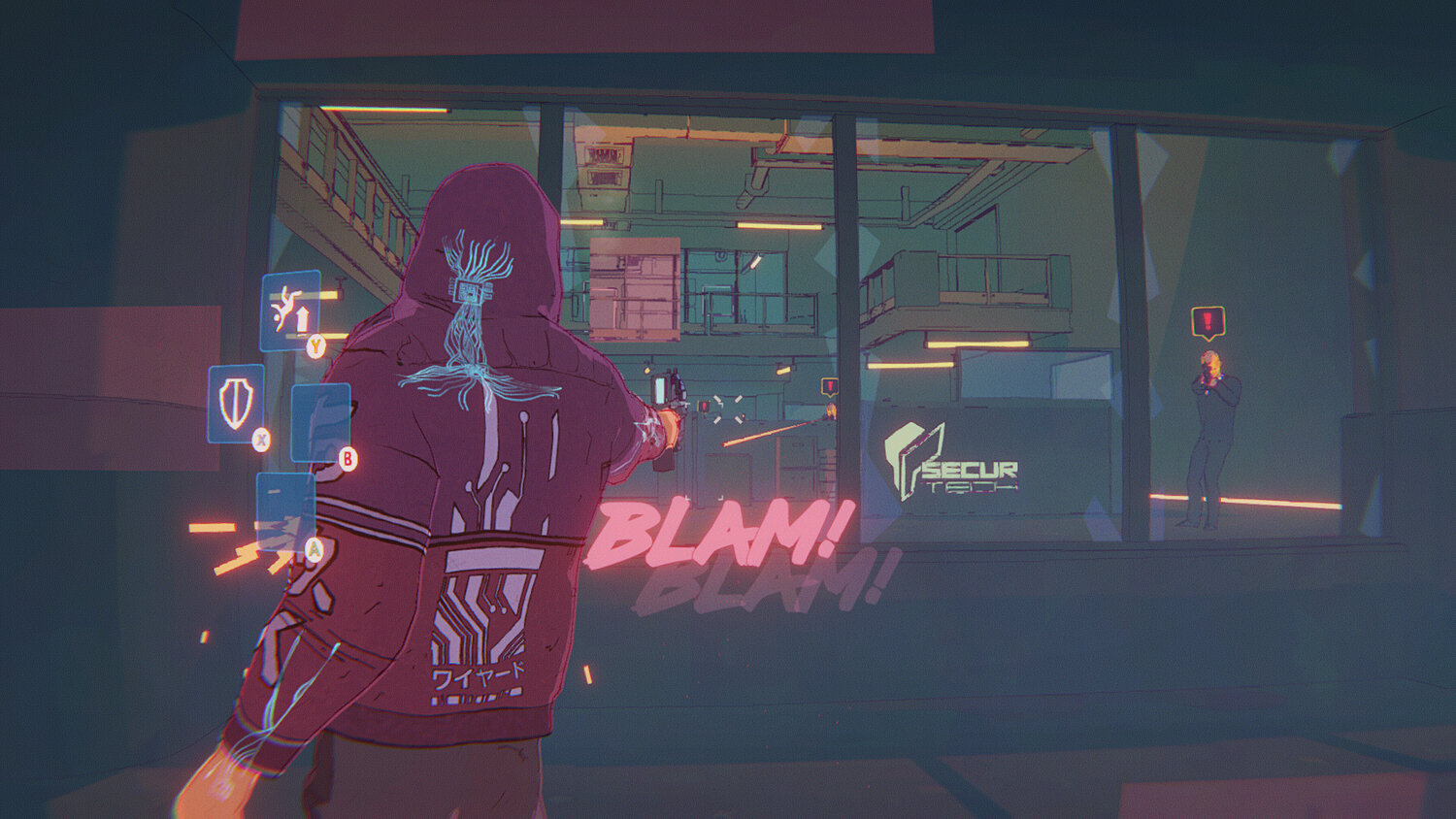 Foreclosed finds itself a spot between Deus Ex and Control as an action-adventure title? The game definitely needs more work on the stages and other sections. The first-person shooting mechanics feel like the shooters from 20 years ago, and the stealth aspect is not well implemented, only needed at some levels. Overall the game has some good ideas but also lacks other major components, it could be an amazing title, still look forward to see what the studio will release next.

We prepared this review with a digital review key for the PS5 version of the title provided by Evolve PR.

Ghost of Tsushima has one of the best completion rates on PlayStation
March 14, 2021