The more technology advances, the easier it is for developers to be able to offer players freedom. Some sagas, such as Just Cause, have turned freedom into their hallmark, and others, like The Legend of Zelda, have begun experimenting with it to redefine its formula. After a third installment that already put the current consoles to the limit, Avalanche has decided to go a step further and offer an even more ambitious and spectacular adventure.

Just Cause 4 repeats the formula of his predecessors offering us an open world in which, hook in hand, we can do all kinds of crazy things. It continues to combine exploration, shooting, driving and creativity to put us in a multitude of situations in which to unleash our imagination. All this, now seasoned with tornadoes, thunderstorms and sandstorms, which are not only spectacular but also affect the gameplay. 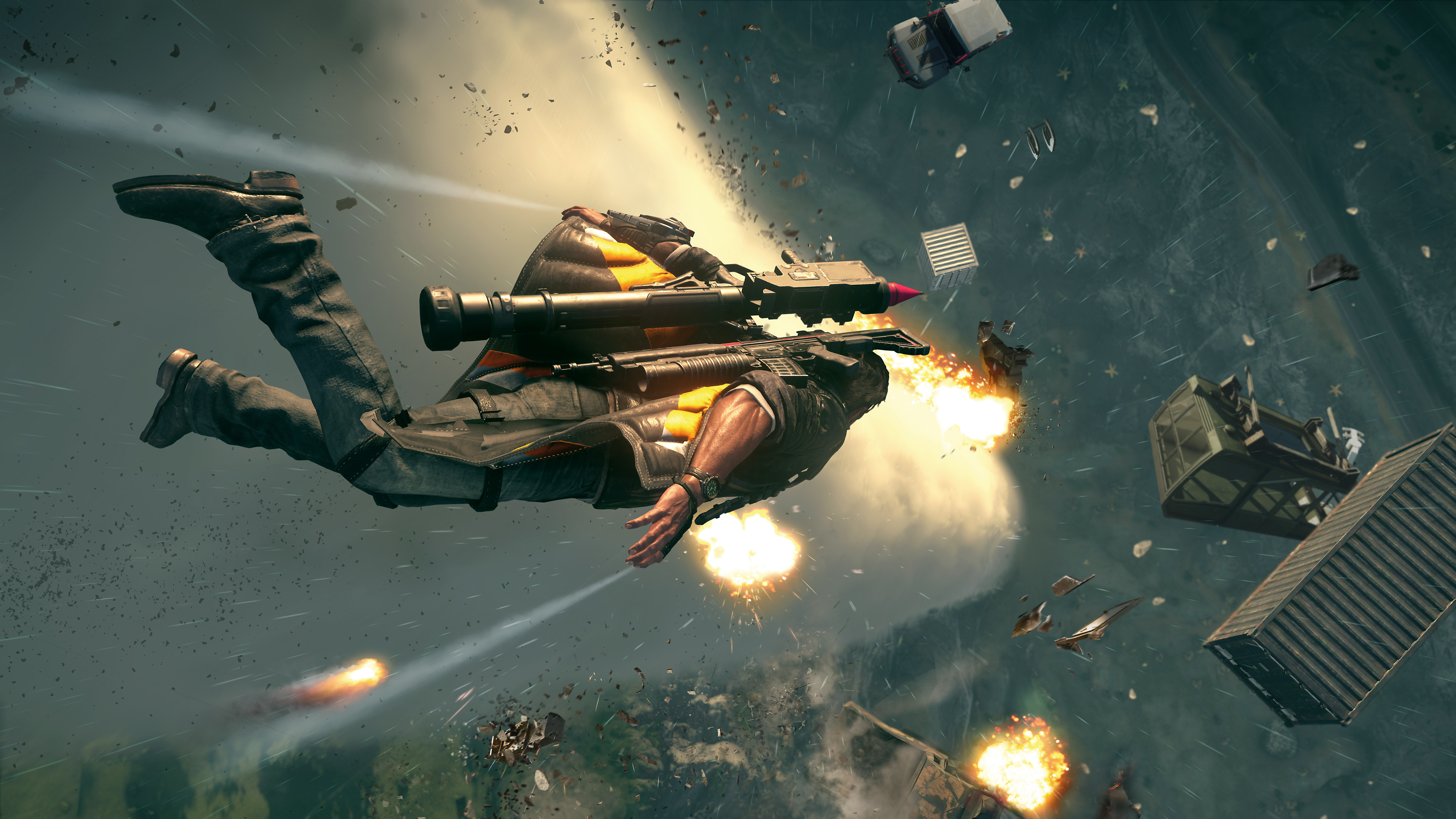 One of the great novelties is the hook’s abilities and its customization. Through this device, we can use the grappling gun, the propulsion and some balloons in the style of Metal Gear Solid V, as well as adapt them to our tastes and ideas. From making them react automatically to do so by pressing a button, to choose how strongly they are activated, as well as the detailed behaviour of them. 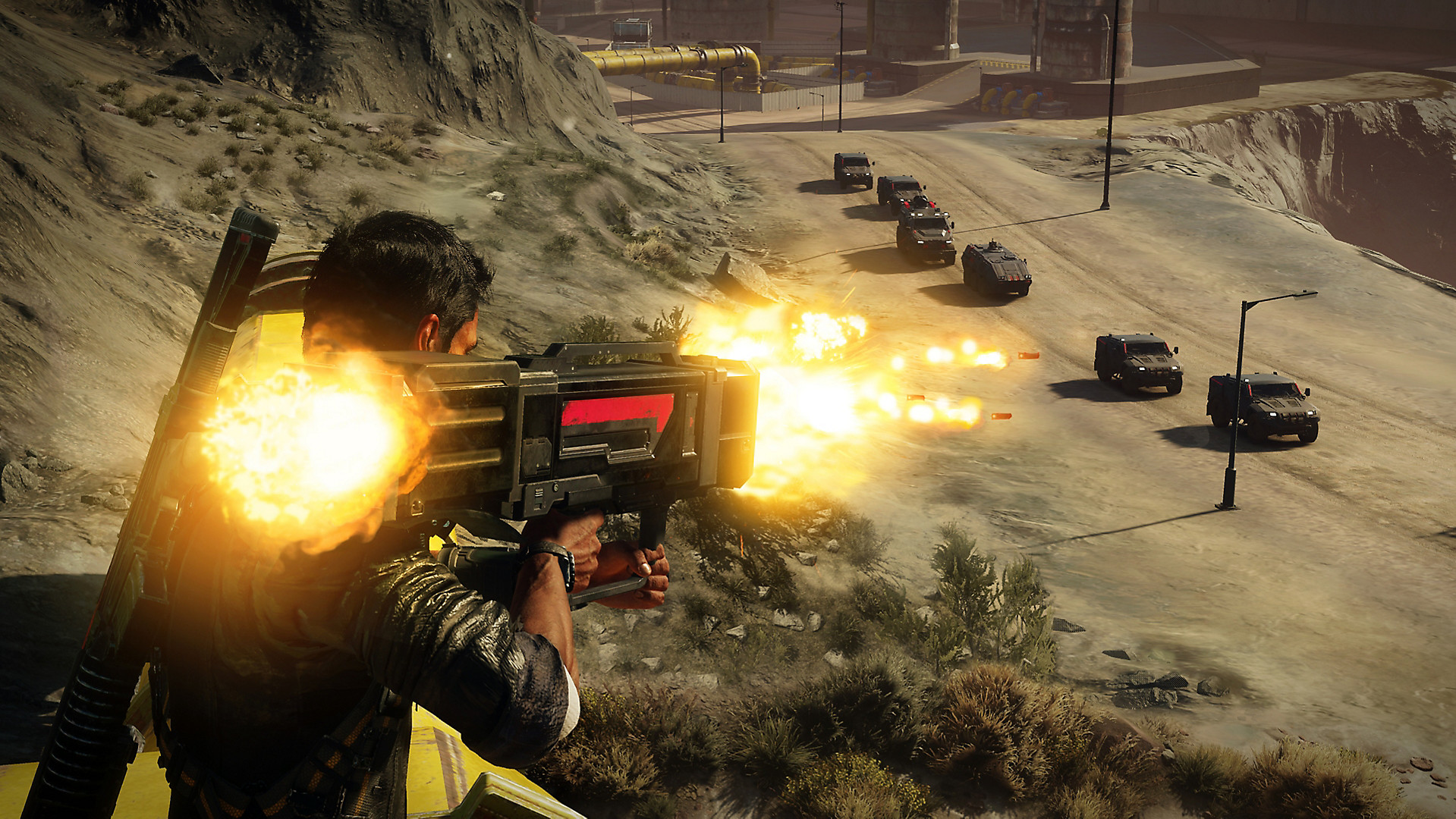 We can make the rope join two elements and make them bounce, that the balloons chase us or go where we aim, or that they explode when reaching a certain height, and we can make the propellers go off after a certain time, for example. And we can combine all this. We are sure that the big fans of the title will do really crazy things, but one of the biggest problems we have found is that the game does not encourage you to experiment.

Before we talked about Breath of the Wild and, in it, many temples forced you to experiment with all the tools that we were unlocking. Here you can pass virtually any mission without doing anything crazy, just shooting. Yes, surely something explodes, but there are so many tools and so many possibilities that we would love the game to invite us (and, sometimes, even force us) to take advantage of them. 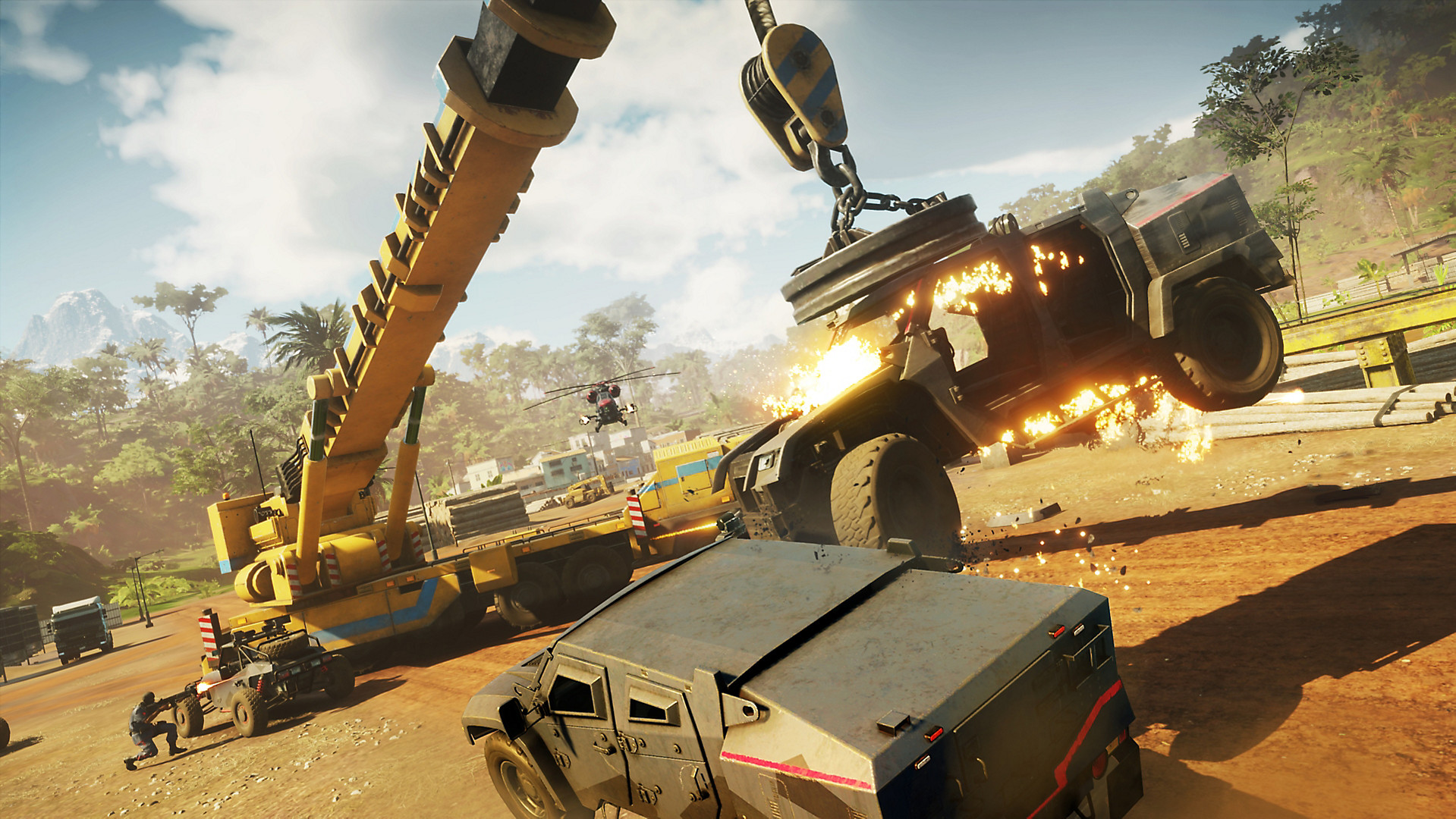 And the design of missions has disappointed us a lot. They repeat too often, and many of them are not allowing you to face them in very different ways. And not to mention the allied artificial intelligence, which sometimes is not even able to get in the car with you. In addition, to advance in the main story, in which we find the best missions, we have to do many secondary, so, you can not focus on making the missions more elaborate. 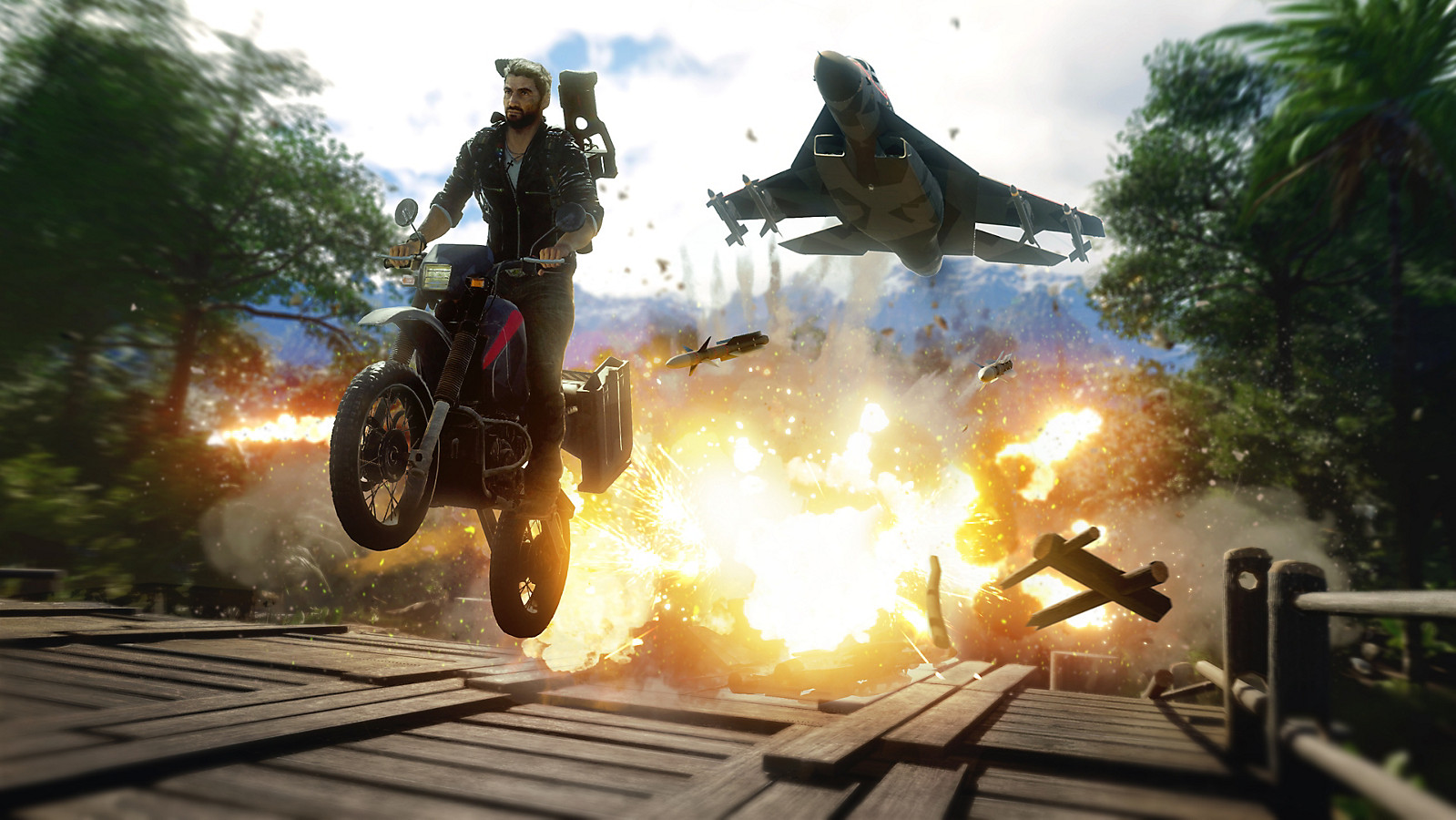 This is, for us, the biggest but we can put the game. It’s a shame that, with all the work behind them to create those gadgets, do not take advantage during missions. If we add to this a large number of missions that are too similar to each other and that we can not ignore, the repetition becomes too latent. Obviously, they are not all, and there are also some more challenging quests, original or spectacular, such as some in which we explore graves or become movie specialist.

Of course, at least the gameplay is always strong. The gunplay is entertaining, to plan with the wingsuit, combining it with the hook and the parachute, it seems to us to be satisfactory, and the driving has improved a lot (except for the bikes, which is quite clumsy). With such a solid base, better missions would have offered an outstanding result.

Impressive from beginning to end

Where Just Cause 4 has not failed is technical. We have played it on PS4 Pro and, honestly, it seemed like a pass. Huge scenarios, with a giant drawn distance, that always maintains a high level of detail and, the best, that yields much better than its predecessor. Yes, we have seen some drop in the rate of images per second, but nothing serious. On the excessive motion blur (which to us only seemed excessive at specific moments), Avalanche has already said that he is working on solving it. 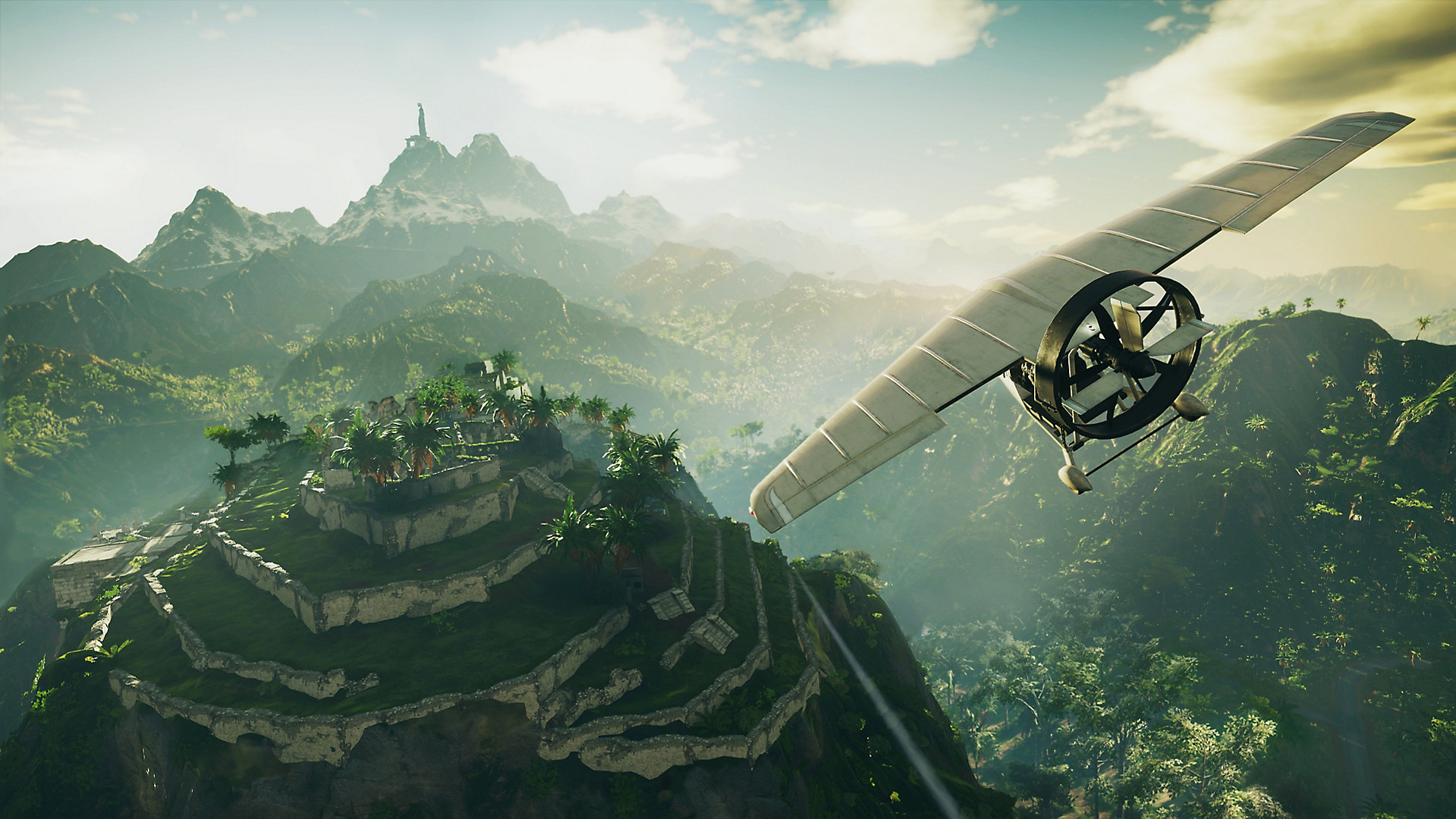 This delivery seems to use a dynamic resolution, but the quality of the image has always seemed very clear. We imagine that resolution drops occur when there is more action on the screen, so it is more difficult to perceive them. We have seen tornados tearing up installations and raising cars, blinding sandstorms, whole scenarios exploding, and the truth is that the rate of images per second has always been maintained at 30 or very close to 30. Technically we thought it was excellent, and we believe that Avalanche will not be able to do much more to expand the possibilities of the saga to the new generation.

In the visual, the introduction of the new biomes is appreciated, new environments that add variety to the tropical islands that are already common. Thus, we have desert areas, snowy mountains, tropical areas and several cities, which give dynamism and diversity to development. 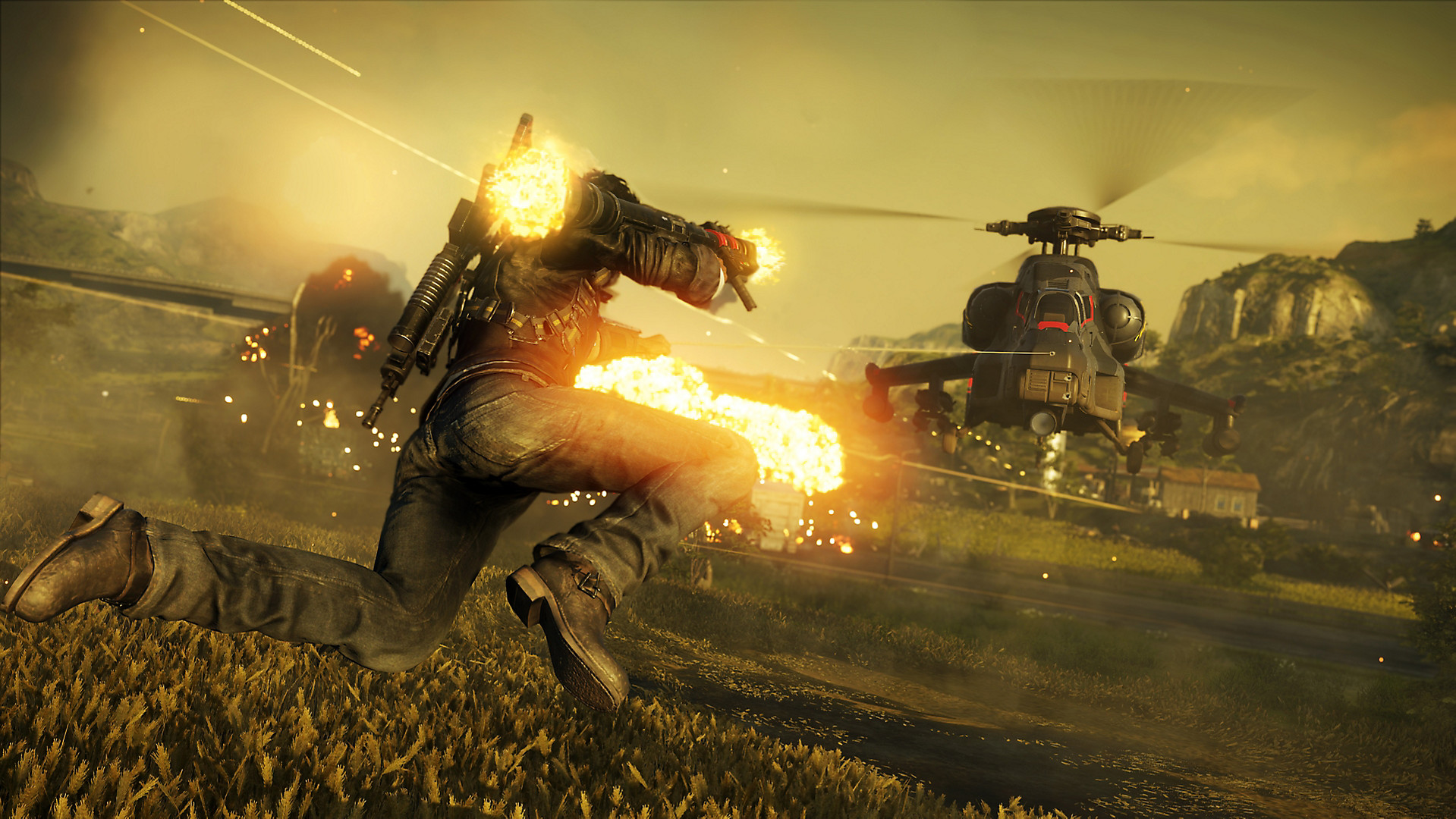 We also want to highlight music. On the one hand, we have the soundtrack that we can hear in the vehicles, with different styles of music, and that is great for the rides, but then we have compound melodies for the game that sound at certain moments, or when we explore, and it fits the moment perfectly.

The reign of chaos

Just Cause 4 returns to do what we know best: make chaos take over. It is, without doubt, a fun and very spectacular adventure, which fails for having heavily repetitive mission design that ends up doing the similar tasks over and over, and does not encourage the player to take advantage of all the tools the game offers. Even so, those who have enjoyed previous installments of the series will find here more possibilities than ever to reign down chaos in a thousand different ways.

We have prepared this review with a digital download code for the PS4 Pro version of the title provided by Square Enix.