A new LEGO adventure with ninjas in combat that has a fun story but lack of variety in gameplay.

Unlike other LEGO games, this time TT Games must create the characters based on The LEGO Ninjago Movie: The video game. It is not even the first game based on the LEGOs, although the previous ones went for portable or mobile consoles. Although TT created a unique play style while bringing the LEGO products to our consoles and other platforms.


There are elements of hack and slash style, combat based on combos with different attacks, an extra skill for each character that is used in puzzles, and combat dojos, there is a lot to enjoy although it feels like that they could have done more.

A varied and deep combat mechanics that upgrades as you play

As soon as we start, game welcomes you to a tutorial mode, we learn several styles of attack which can upgrade during the game by using chips, some upgrades serve to lower the defense of certain enemies or break their armor, others to attack flying enemies or to make a sweep that breaks a horde of enemies … The combat is much deeper compared to other LEGO games.

These basic attacks can be upgraded by using a few Ninjago coins that are achieved at certain times. You can invest every coin in a different type of attack, which allows you to adapt the combat to the tastes of the player and is a very fast process for both the brevity of the game and the ease with which coins are obtained. 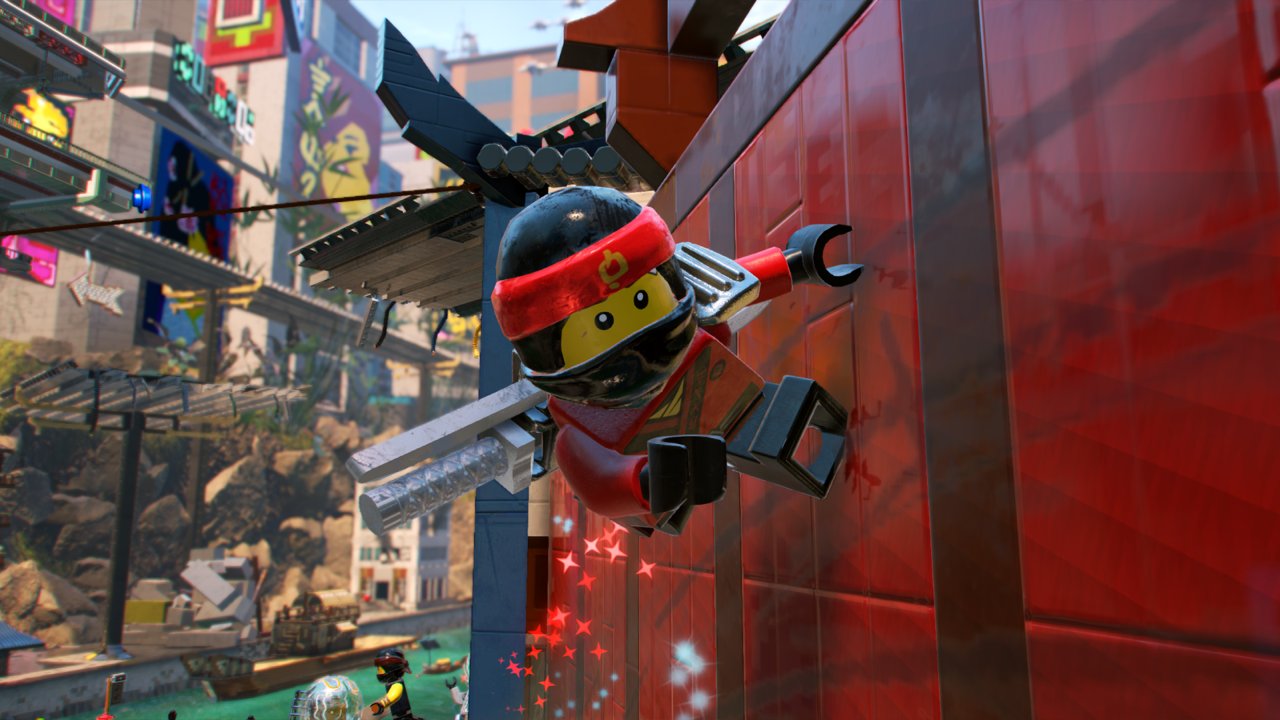 Combat is the best of the game and forces you to use these techniques on some specific types of enemies, and you have to take into account the weapon that each ninja carries since some have more power and others can do a ranged attack, you can tell the difference between controlling one or the other. The clashes are quite spectacular and give them the space to face them, taking into account the difference of battling each enemy.

Exploration has come in second place to the detriment of combat, and the scenarios are much more enjoyable in free play, but neither are they too big. The puzzles have also moved to a second place; now it’s all moving from one stage to another or reaching a point using ninja skills (wall-run or jumping from one pillar to another, pushing a button in both cases), are not too attractive and become annoying when you must complete a whole platforming level in one go and you fall, you start from square one.

The construction of an object with LEGO pieces is a couple of times a puzzle in itself since TT Games has included the multi-construction that was introduced back in The LEGO Movie Videogame. There are two options, the order in which we constructed the object or the moment in which we destroy the created object. This is a nice change of pace that is not used too often and is entertaining.

One of the characteristics of Ninjago is spinjitzu, a different whirlwind attack for each of the ninjas, which in the game is represented with a skill that serves to activate mechanisms based on water, fire, electricity, ice or land or to build something using the spinjitzu of “building power” of the green ninja. It fits very well in the puzzles given that the combat is already quite complete and with the empowerment of each attack we already have enough advantage over the enemy when we advanced further through the game. 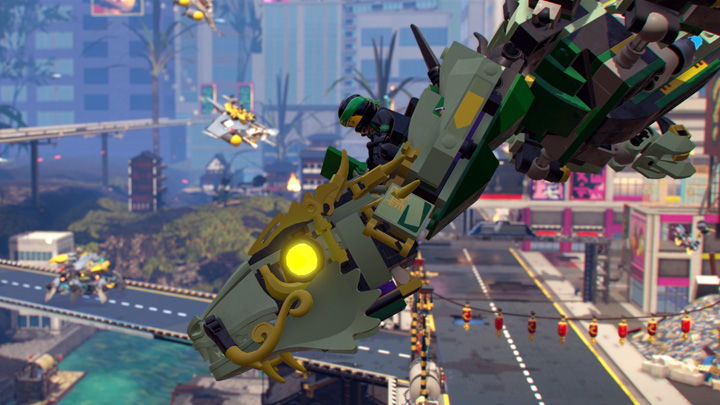 The story mode is really short, lasts about five hours, and the replayability and duration of the game are saved, as always, by free play and the achievement of all characters and collectibles (from pieces for the creator of characters to bricks golds that open new areas), although the characters are very well shaped as identical to the movie; every ninja and villain have their own unique personality.

It keeps the mood of LEGO games, which is always appreciated, and there are enough characters to play many hours if you want to get them all.

Co-op campaign and other modes for up to four players

LEGO Ninjago Film also has the cooperative mode for the campaign, that is already essential in LEGO games, although the split screen causes some problems; for example, a phase in which the ninjas are mounted to turrets, and you have to shoot other ships and artifacts and from one of the turret has no way to maneuver to reach the targets. It’s a shame that such detail has been neglected which is one of the strengths of these games. 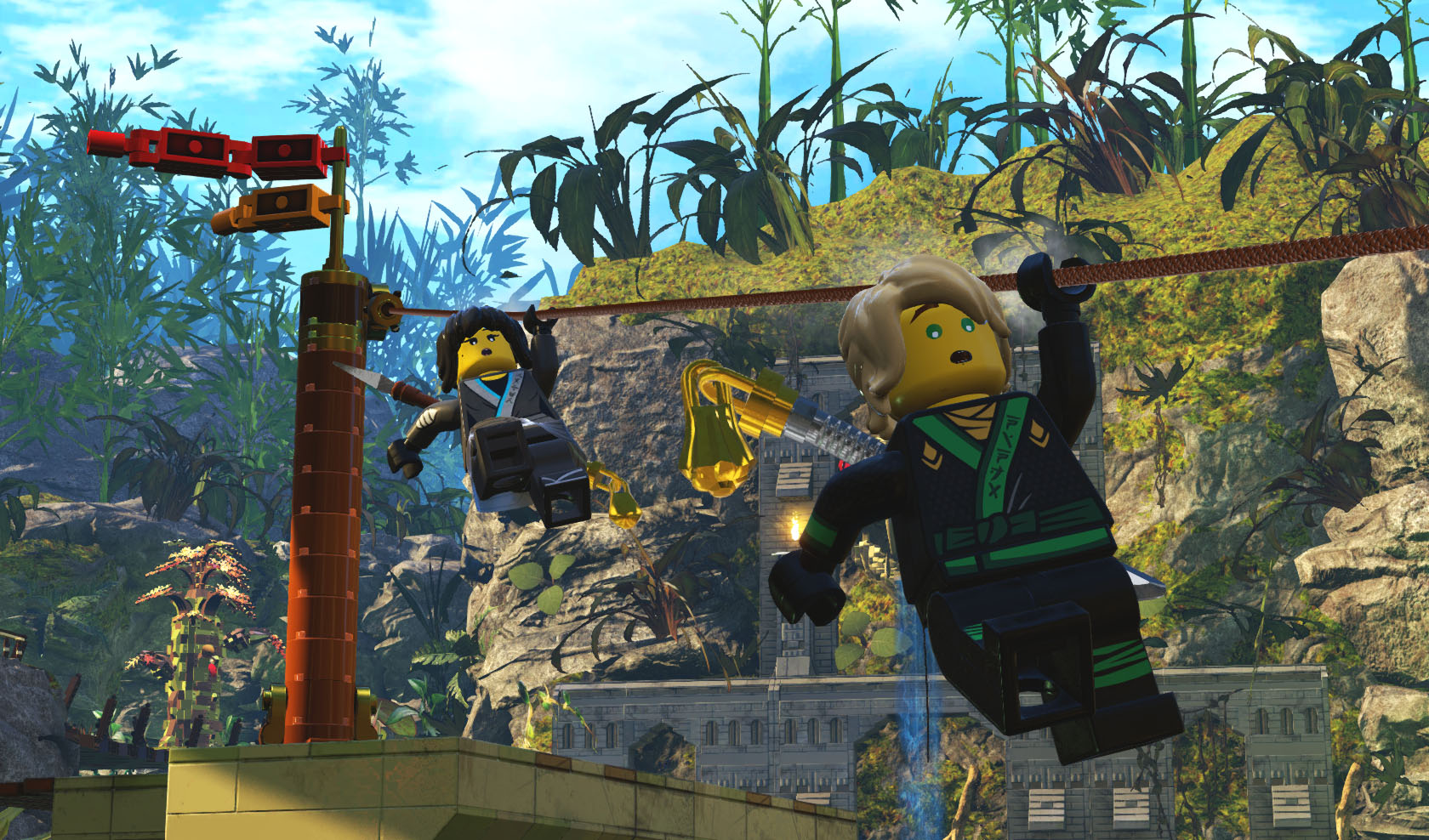 In addition to being able to play the campaign with another player, there are three other modes for four players that consist of capturing the flag or reaching artifacts; there are different scenarios and each is a fun also introduce a different way to play, although the active area for each player is greatly diminished when the screen divided into four. 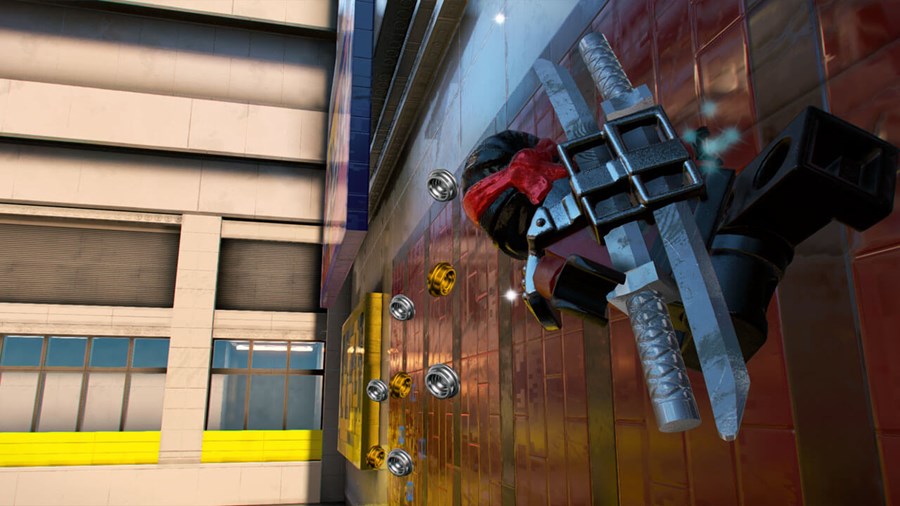 The story of the film is poorly told in the game. LEGO games unfortunately never shine because of the narration in-game lacks depth, but this time is worse, especially in the first chapter, and then there are scenes in which cut-scenes makes no sense at all. It’s a good thing it’s not an art and rehearsal movie either. If you have not seen the film or know the series prior playing the game we suggest you to do some imaginative exercise to understand what is going on, and that there are some twist and flashback that could have given more play.

Technically, there are fewer bugs this time compared to the previous LEGO games, which were reaching worrying limits. This time we have not encountered any game breaking bugs, although it the game shut down and restarted on a couple of occasions. Worst is the very long loading times for each new level, and sometimes you have to endure that load time to watch a cutscene, some action and then another eternal loading time.

The levels are not too big, but very varied: in some cases, as in the city levels, everything built entirely with LEGO pieces, and in others, they are more realistic. Oddly enough, that combination of the two art style works well. The voices and the sound effects are pretty good as usual as the previous LEGO games.

The LEGO Ninjago Movie is entertaining, and the formula continues to work although gives the feeling that the game has been half developed. It captures the essence of the movie and rightly differentiates the style of each main character of the film. It’s only a few things we mentioned earlier that prevents it from being a better game, although in the end, it leaves a pleasant taste and the feeling of having had a good time.

We prepared this review on a PS4 PRO with a promotional copy provided to us by Warner Bros.