LEGO Worlds focus on their own products this time, building with parts is fun as well as investigating the different worlds that TT Games has created.

LEGO pieces used to be at the service of all kinds of film franchises; it is strange to see a game in which there are no known characters or references to any film. But it makes perfect sense that a series that bears the name of a company dedicated to creating plastic blocks for toy constructions launches a game with plastic blocks in which the player must build. To be more precise, build and explore.


By explaining what the game is briefly about, LEGO Worlds is the opposite of LEGO Dimensions; That used real dolls to provide content to the game and followed a story that was based on multiple franchises, you could play as Lex Luthor, Joker or a Ghostbusters, and expansion packs for all tastes.

We got tools to design the LEGO Worlds

LEGO Worlds has generic characters in principle and there is no story line to follow. The game focuses on offering the player a range of tools and a huge amount of objects to discover and build what you want. What has been a good level editor combined with a bit of adventure and enough exploration, right? You are an astronaut whose ship has broken and you need to go from one world to another collecting the classic golden bricks of LEGO games, to repair it and get further and further away. It’s a good way to control the player’s progress by giving them access to ever-larger worlds. 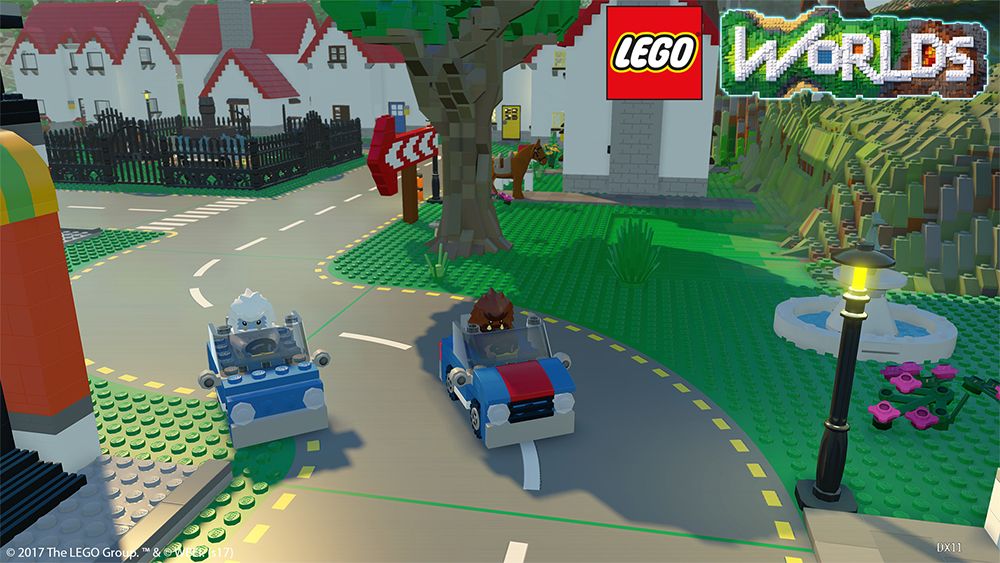 The first three worlds function as a tutorial. All the worlds are generated procedurally in each game, but the missions are the same always. The first world is a tropical jungle populated by pirates, the second – dominated by a large volcano – is full of troglodytes and the third is a world of candy, and later you will find another desert with the setting of the American West, ice worlds … Constructed entirely of LEGO pieces they do not attempt to camouflage which are made by nesting blocks.

In total, there are ten small worlds, 25 medium, 50 large and 80 gigantic worlds. To unlock each new size, you have to get a certain number of golden bricks that are achieved by completing missions that almost always consist of finding an object. Since it will take more time in LEGO Worlds is to collect the thousands of objects you find, and once you have registered with your creation tool become part of your catalog and you can reproduce as many times, You want after purchasing it with in-game currency.

A gadget to collect, and a few more to build

The discovery tool becomes compulsive, and when you arrive at a new planet, the first thing you do is to walk around with it in your hands pointing at all the objects you find, some of which belong to different collections of blocks Which is on the market. There are more useful tools, such as the landscape that transforms the terrain, the construction that serves to design with LEGO blocks as you would in the living room of your house, paint to paint the bricks of the color you want, or copying Which can play parts of the game world. 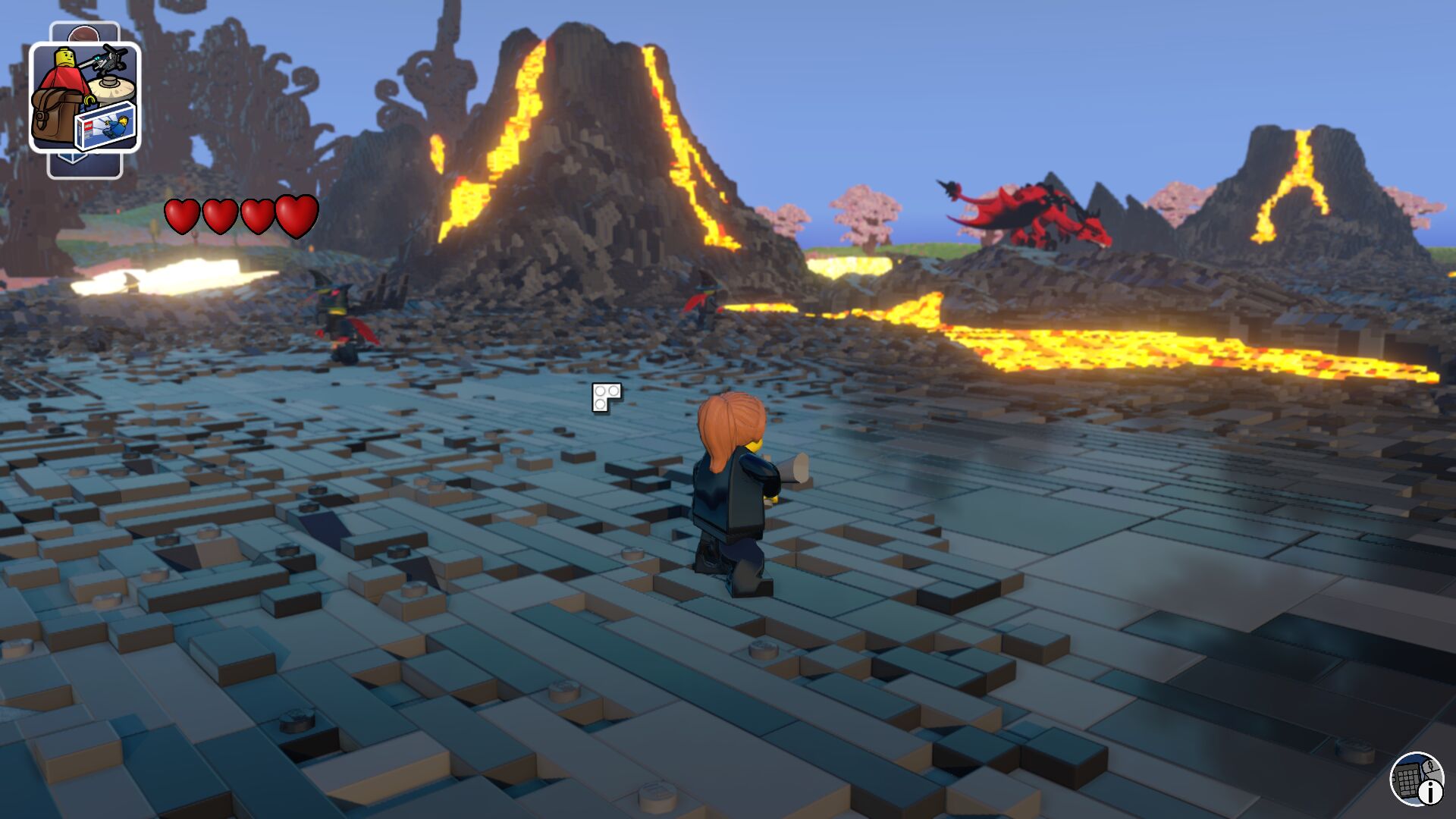 Not all of these tools are as easy to handle as the discovery tool. Landscape and construction require a little practice and, in the case of construction, spatial vision and imagination, although when combined with the copy tool everything is easier.

While you are discovering new pieces you are also finding new and attractive details mechanics: under the surface you can find a tunnel system with treasures, you can explore the underwater background and capture more objects there, you have a good amount of vehicles and animals to move around Land, sea or air, and when the sun goes down there are some characters that attack you. Although this day-night cycle has some inducements, it is difficult to handle some scenarios in the dark.

Freedom to explore or build

TT Games introduces different tools to play as you wish: exploring or building, and that none of these options condition the progress in the game, and this is one of the main values of LEGO Worlds although the missions require you to perform both actions, the exploration is not too complicated, and the game is very benevolent when it forces you to build. 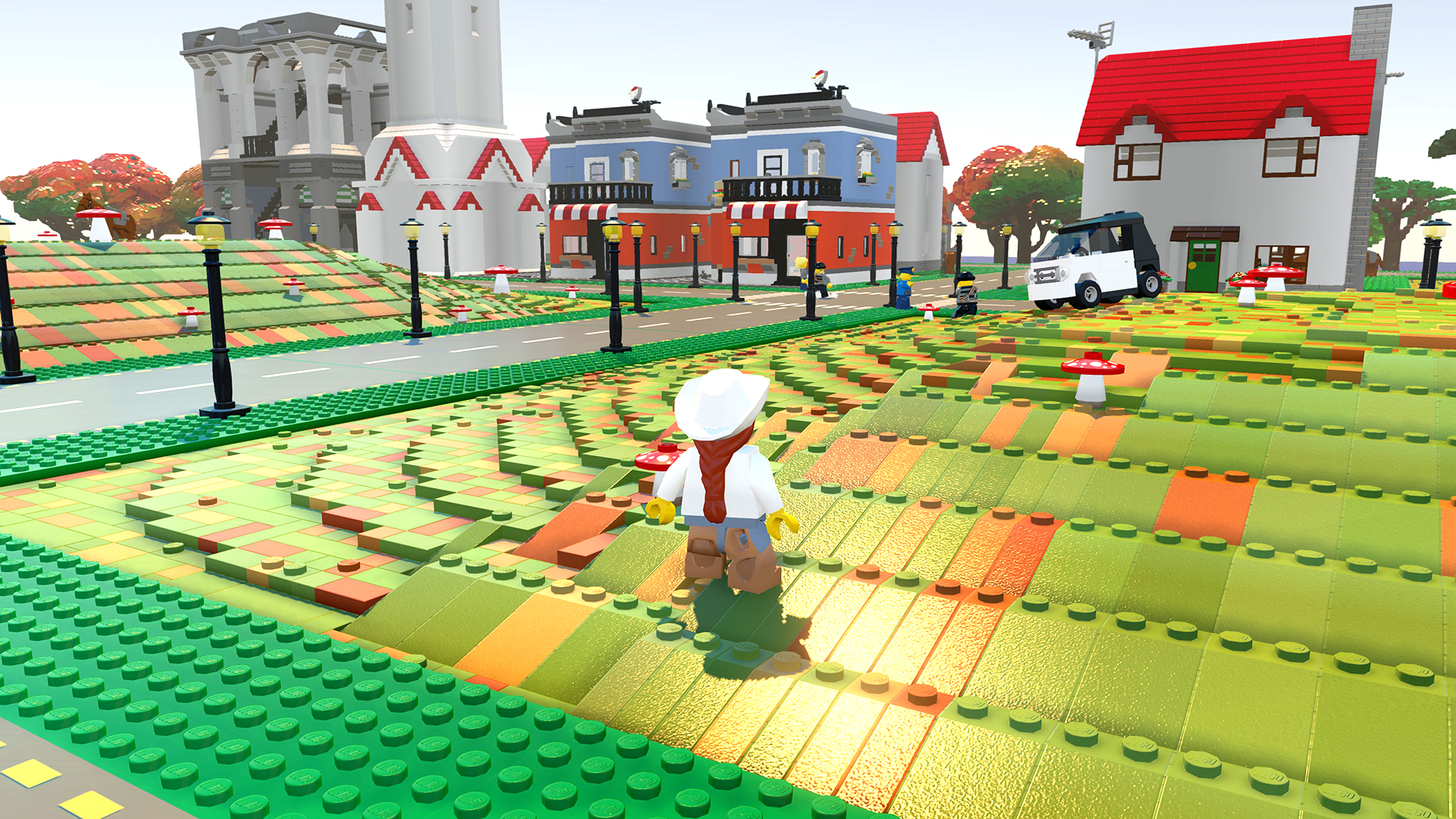 It is also possible to design a world from scratch, for those who are especially skillful designing, since LEGO Worlds is a magnificent scenario editor. To expand the catalog of pieces, you must catch some green characters that appear from time to time across the worlds in what is one of the most boring tasks of the game, although the chase does get you explore new areas, which leads you to more discoveries.

LEGO Worlds has the usual cooperative on split screen, although in this case – perhaps for the freedom that provides not to work with other franchises, there is also multiplayer online (for two players on console and up to four on PC), although there are no tasks joint, but this kind of multiplayer works very well in games like Minecraft with a strong construction and hints of adventure. Thanks to this, it works without problems for the most usual in the series, that an adult playing with someone younger to guide them and also you can play co-op the game with friends.

The biggest problem with LEGO Worlds is that detected in TT Games in recent years: a lot of visual bugs and that affect the game experience. The unpredictability of procedural worlds certainly contributes to more failures than in other LEGO games, to such an extent that they have included the option of skipping the world if you get stuck. 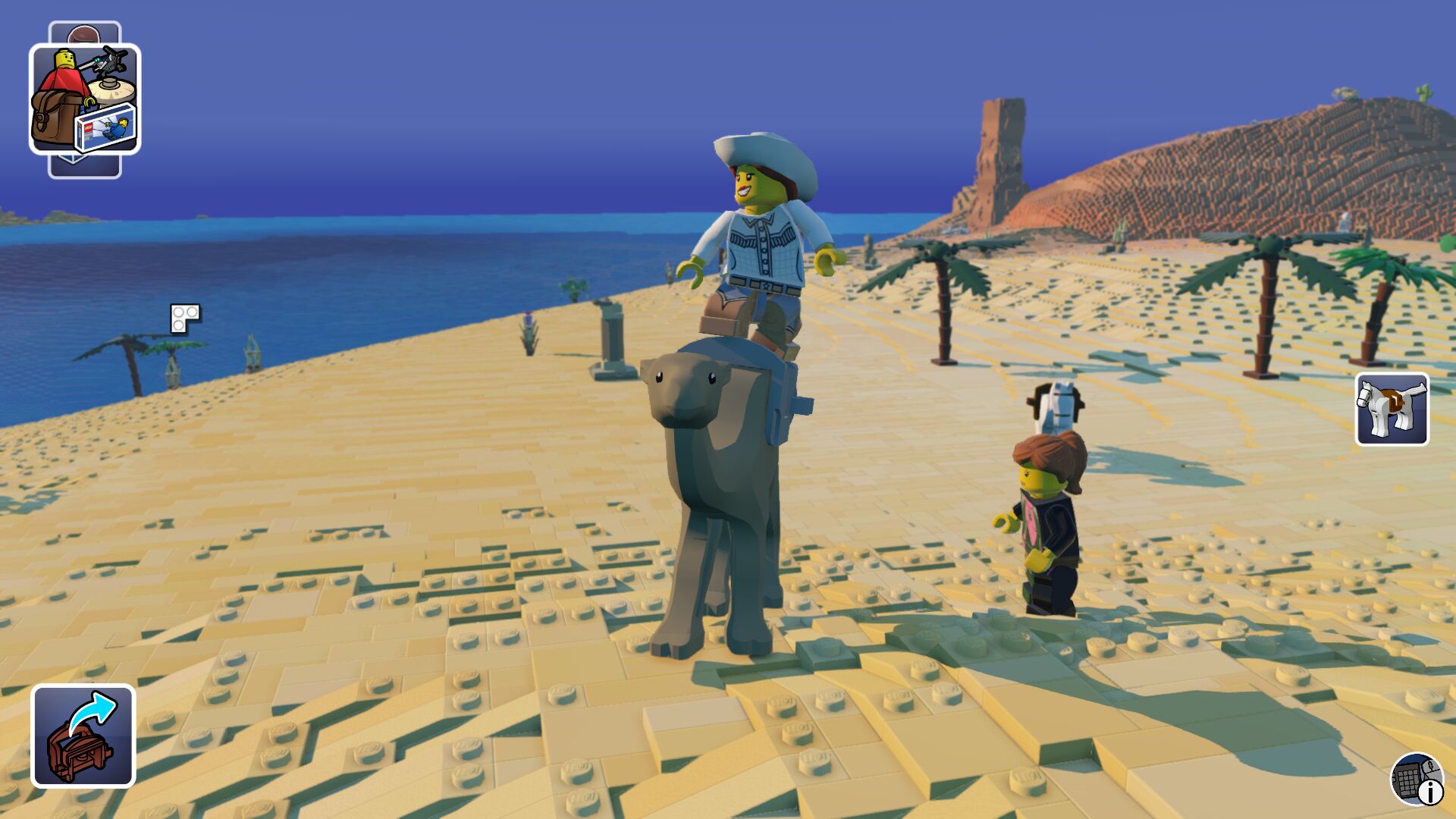 When you have already traveled a few worlds, and you have collected a good amount of objects it becomes difficult to find a specific object since they are not categorized. And the missions are sometimes so simplified that it is not clear what you should do and have very little variety.

There is a mini-map, but it is quite lousy, and the global vision of the planet does not clarify too much. In general, it is difficult to understand with the different indications, and the only thing that is clear is the location of the missions of golden brick, that sometimes they appear like random events in which you must defend to a personage of the attack of others.

The humor and the sense of freedom

It is very fun to travel these worlds for the feeling of freedom that conveys the game and because the charm of the LEGO series transcends the franchises with which the studio usually works. In LEGO Worlds you can see the usual humor in LEGO, some of the characters interact with each other in a way that makes you smile and there are very funny behaviors.

The sound effects are in good measure the usual series, striking and successful, and highlights the music, attractive and very suitable for the setting of each world.

The concept of LEGO Worlds makes a lot of sense, although the result shows that carrying it out is more complicated than it may seem because of the high freedom it gives the player, that you can destroy part of a world with bombs when given the right tool.

The procedural generation of worlds gets good results almost always, and the part of exploration is satisfactory in general, and with very amusing moments, although the missions have almost no variety. The construction becomes entertaining when it comes to copying and finishing a structure, but it does not make much sense to play as you would with the pieces in the real world, because it is more complex handling the process in a video game. 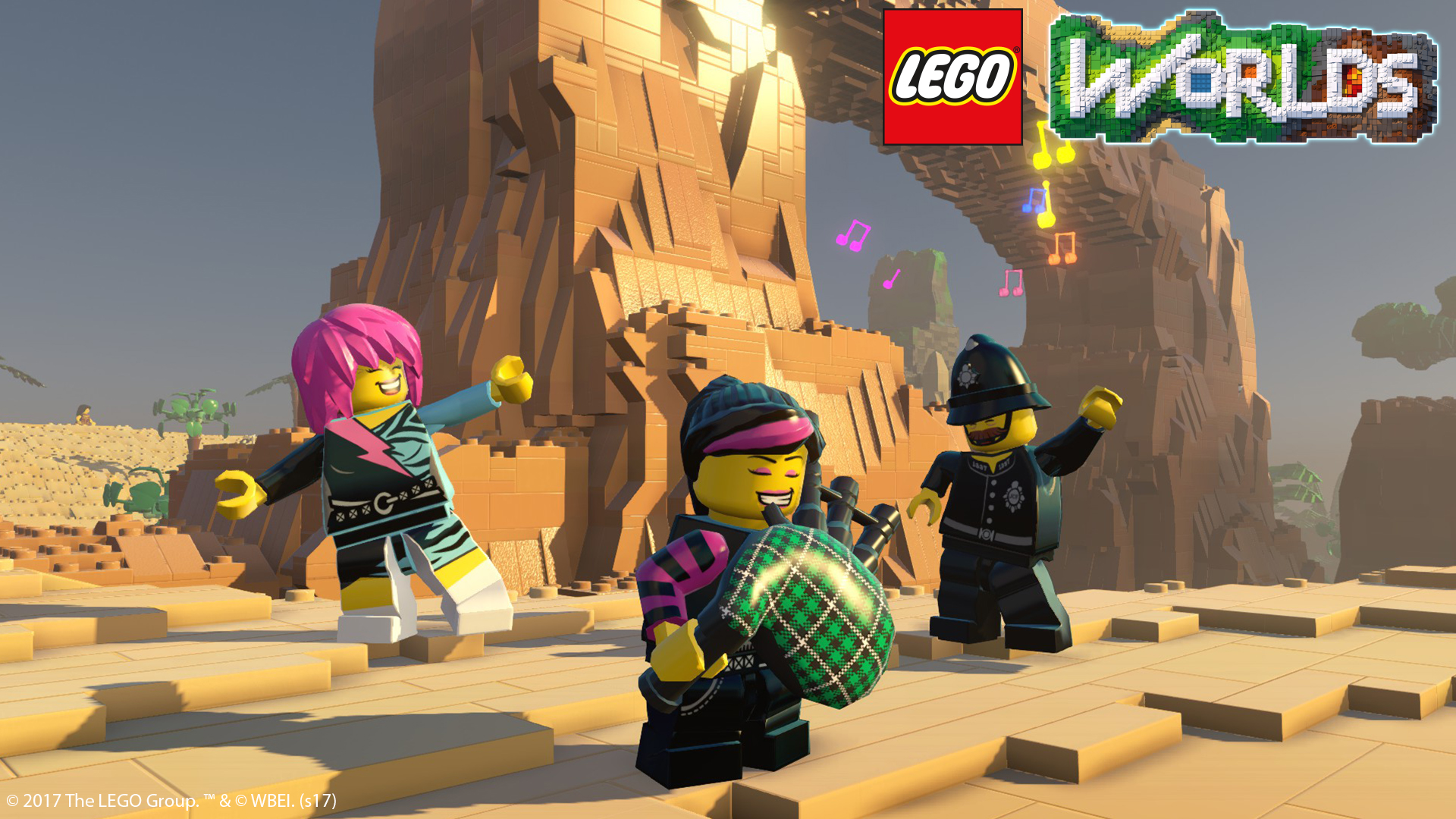 LEGO games are investigating new terrains, and the truth is that the series can withstand all kinds of experiments without shaking its foundations. LEGO Worlds may appeal to a smaller audience because it does not have the reference of any blockbuster franchises, but it does have the attractiveness of exploration and with a base of millions of players passionate about the fit pieces that can see a new field in the digital construction.